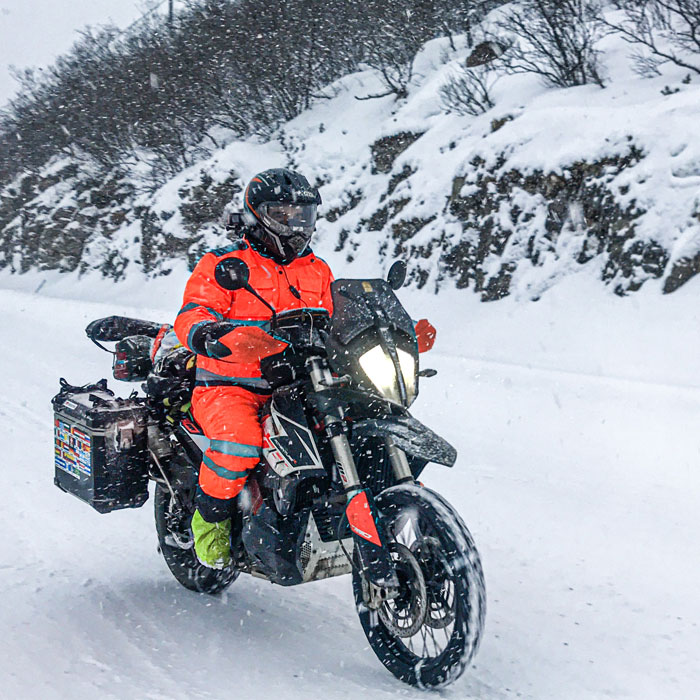 GETTING CLOSER TO THE END GOAL

Are the colors of the Aurora Borealis real? How much colder could it possibly feel on the bikes? What if we just quit and head back? As we were getting closer to the northernmost point of the European mainland, our trip through endless snow-covered roads brought so many questions…

As we rode our bikes through several countries heading north and towards the Nordkapp, the temperature started to drop, and rain turned into snow. Despite freezing conditions, we were both set on the end goal, to reach the most northern part of mainland Europe on our bikes during winter. And with that main goal in mind, every kilometer run was getting closer to the end goal.

Along the way, we made an overnight stop at the capital of Estonia, Tallinn. It all looked great until walking out of our hostel the next morning to see the KTM 690 ENDURO R lying flat on its side in the snow. During the night, the snow had melted under its side-stand and with the help of the cold wind the bike ended up falling flat on the ground. The fall had caused the windshield to break, an issue we had to fix ourselves before getting back on the road.

To continue north we took the 2.5 hour-long ferry from Tallinn to Helsinki. When the ferry gates opened in Helsinki, we were shocked by what we saw. With the roads covered in deep snow and the freezing wind hammering our bikes and bodies, the conditions were not favorable at all to ride bikes. That made the 15-kilometer ride to the shop where we were going to collect and install the tire studs a bit of a nightmare.

Despite the roads being totally unsuitable for riding, we still had to ride through and reach the shop. At the exit of highway and with pretty low speeds, we both dropped our bikes. We’re both pretty used to the feeling of losing control and dropping your bike while riding offroad, but to get that feeling on tarmac, that’s a whole different story.

When we reached the shop, they let us work in their service area and we installed more than 500 studs in 2 hours and 15 minutes. Now with the studs and the heated visors, we were better prepared for the last part of the day’s ride. Waiting for the snowstorm to pass, we decided to head to our hotel and grabbed the opportunity to do a bit of sightseeing in Helsinki.

As soon as the weather calmed down in Helsinki, we hit the road to the north. As we progressed the visible part of tarmac kept getting smaller and smaller. When we reached the Arctic Circle, there was no sign of pavement at all. It was 100% covered with ice. Despite conditions being very hostile, we both started to enjoy the adventure through this white land of snow. We left all the crowd behind and started thinking that we were alone till we came across a few foxes and reindeers. It was cool to see wildlife that close while riding a bike.

When the temperature dropped to -5 degrees, we decided to add the orange suits we bought on top of our gear. With these orange suits on I guess we might have been visible from the moon… but most importantly we both felt a lot warmer. Cruising through the endless white roads slowly became fun as we were getting more confident keeping our focus on the road continuously. After some hours riding in these conditions, you risk getting hypnotized by the monotonous environment. If you don’t give yourself a break, everything starts feeling the same and you can no longer recognize the changes on the road surface.

Even though the studs were working well, we also needed to lower the tire pressure a few times to improve grip. The terrain changes so often that sometimes the tire studs are not the ideal choice. The heavy storms and snowfall make it hard to ride with the studs. And with us being far away from our final destination, we realized we needed to take things one step at a time. Knowing the conditions will eventually get trickier, we’d prepared DIY tire chains. Moving slowly and cautiously on the snowy terrain with speeds hardly exceeding 40 km/h, the tire chains worked pretty well to help us move further north.

Getting used to the hostile environment, you start appreciating anything that pops out around you, from the frozen lakes to the small hills with great views in the white valleys. In our brief overnight stops, we also got to experience the famous Scandinavian saunas. Even when it’s -15 degrees outside, the local saunas will certainly make the whole experience a lot better.

Somewhere along the way and after some very cold days of riding, the scale of the whole effort becomes more clear. For us this was our first time riding in such conditions, and I guess this made everything harder. But we were both prepared physically and mentally for the challenge, and this turned the challenges into experiences.

We were glad that we gave a start to this exciting adventure, and we were able to develop new skills. Reaching the Arctic Circle in winter conditions was our first milestone and the Nordkapp would come next. A very popular destination for bikers, for us the Nordkapp became the end goal where all our efforts would be rewarded, a point that kept giving us the chance to improve our skills and learn.

Using the experience from past trips, it became clear that the push toward the north was not a time trial or a race against the clock. Determined to reach our final destinations, we accepted the changes of temperature as they came and learned to respect the hostile environment, we were riding our bikes through. Taking well-needed rests along the way was also crucial to help us continue towards the north. We would ride and push through the long hours only when it felt wise to do so. For any trip like that, you have to be prepared to be flexible with your plans. And when the conditions start getting harder and harder, instead of losing your motivation you have to keep your focus on the end goal and enjoy the process.

24 Responses to NORDKAPP IN WINTER – PART 2