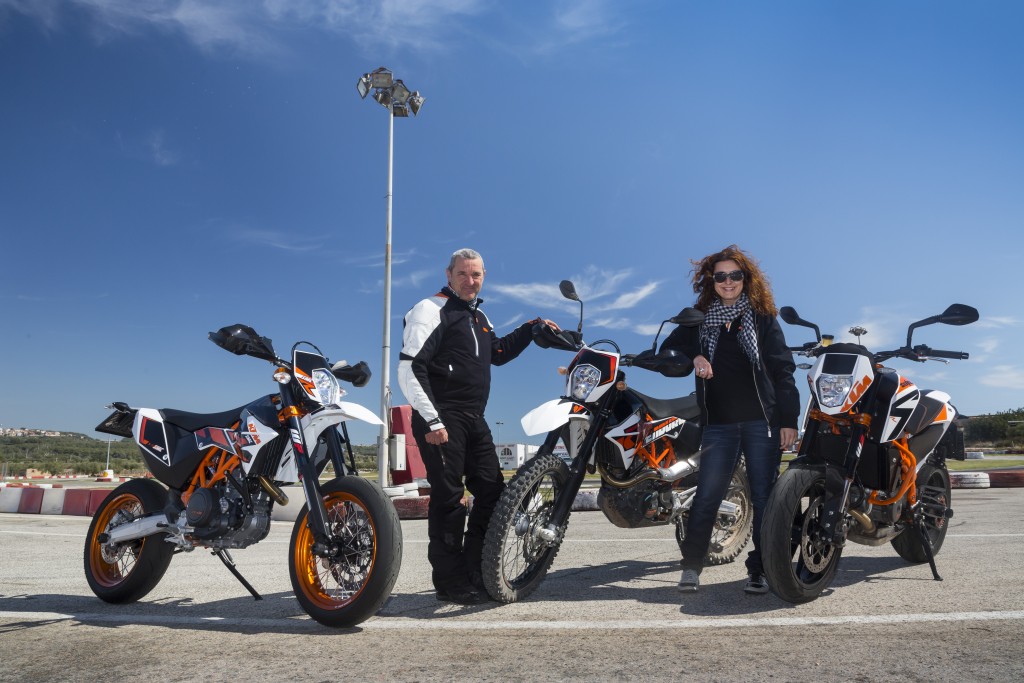 On your marks: LC4 Triathlon gets out of the blocks

The sumptuous 690s are gathered together for their own special meeting. Here is what happened in Catalunya.

Somewhere just outside of Barcelona a familiar rumbling can be heard. A few more miles further down the coast and a similar drone is punctuating the air at the Vendrell Karting Circuit. Hang on; that’s the same engine pitch over there in the woods. 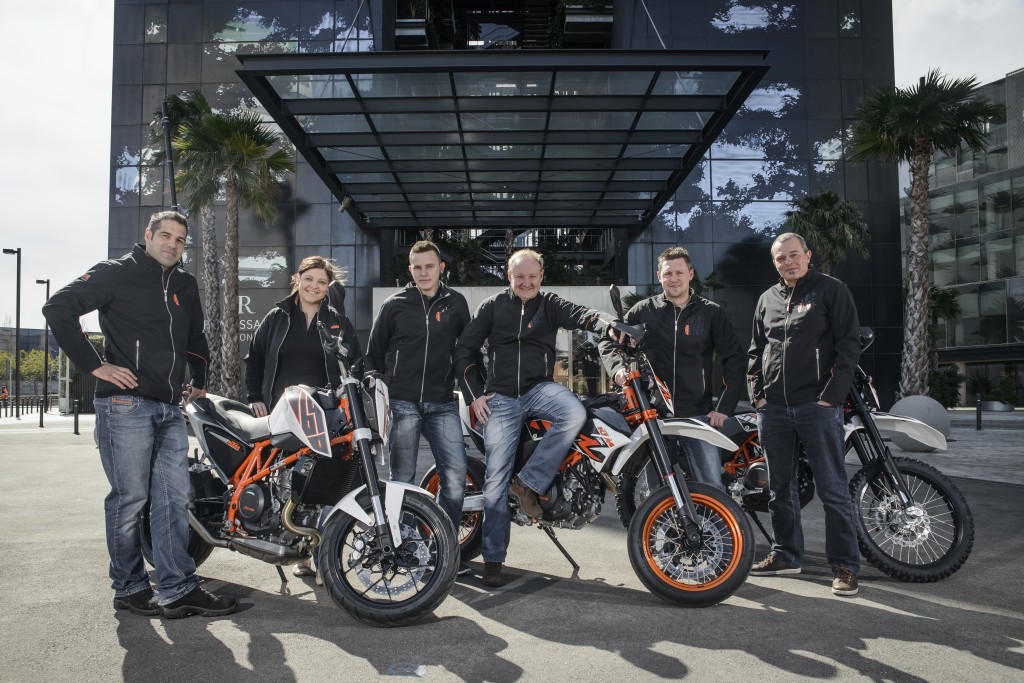 The 690cc powerplant that forms the central hub of KTM’s vast motorcycle range has earned its own separate celebratory event in 2014 as those magical people in Austria – Willy Wonka’s chocolate factory of the motorcycle industry – have come up with a new initiative: the LC4 ‘Triathlon’.

It is another one of those happenings that make you realise what a blessed existence motorcycle journalists actually have. On this occasion around thirty of them were invited to the Catalan capital across two days for ride outs on the 690 DUKE / R, 690 SMC R and the 690 ENDURO R. The latter two now boasting ABS. The premise is simple. “We have three different types of LC4 that you can use nearly everywhere; the DUKE for urban travelling, the SMC Supermoto for something more sporty and the 690 ENDURO R for off-road”, says Event Manager Lisa Schliephake, “…there is something for everyone.” 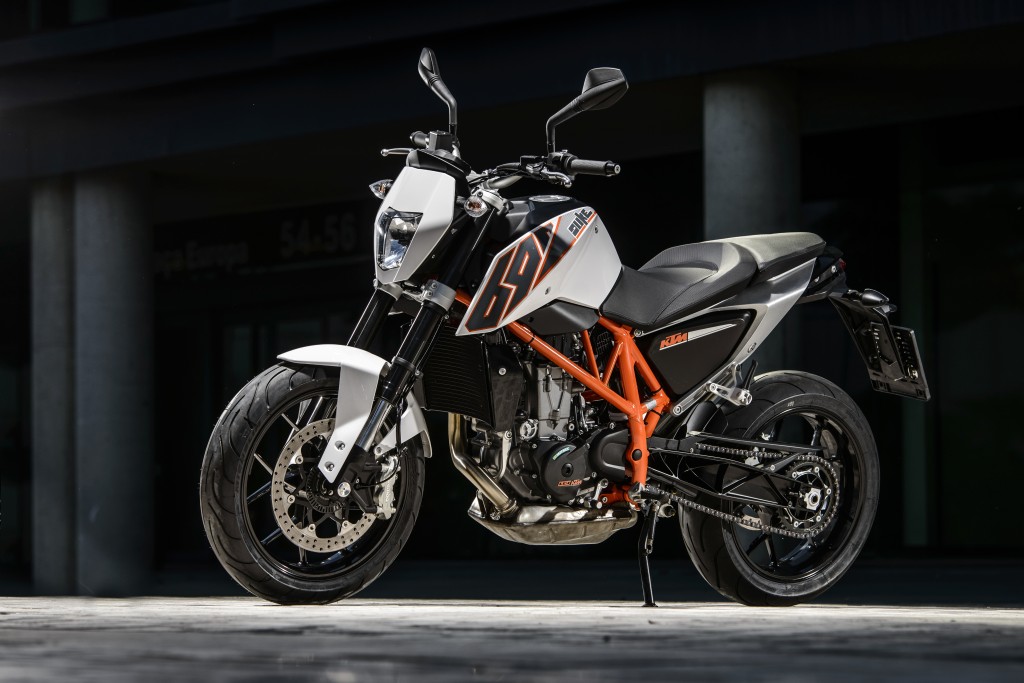 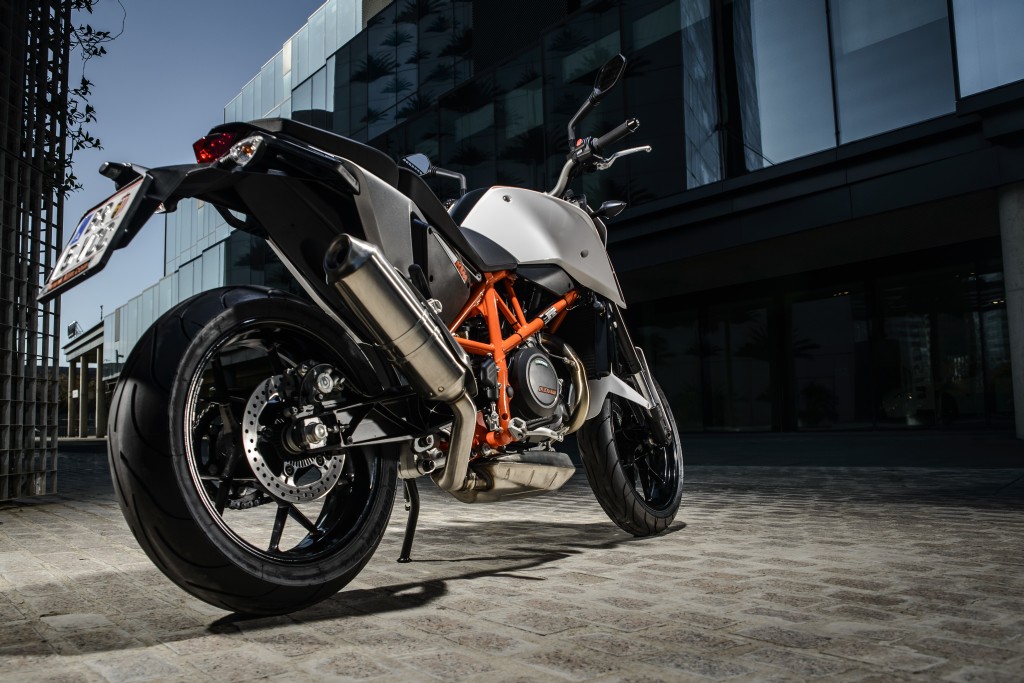 So the DUKE gets a run across some of the dizzyingly windy roads near Vendrell, the SMC R is drifted around the Kart complex (where inspiring photos of Marc Márquez and Dani Pedrosa hang on the walls of the café) and the 690 ENDURO R – a magnificent off-road beast that somehow feels lithe but has a spread of power that stretches as far as the Mediterranean close by – is flicked and bounced through a fast enduro trail nearby. 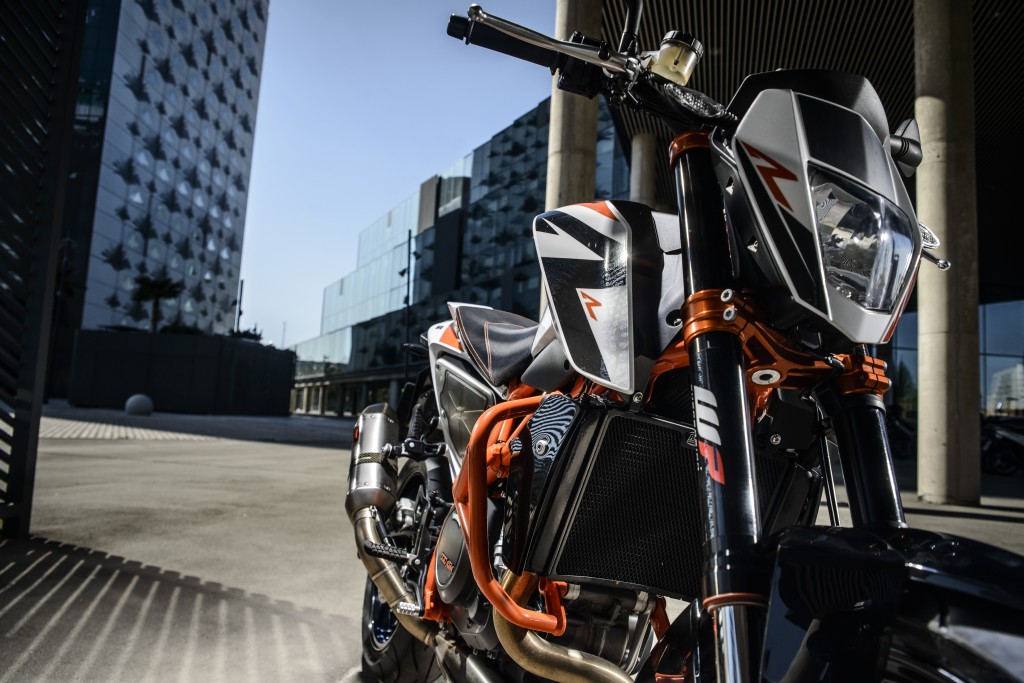 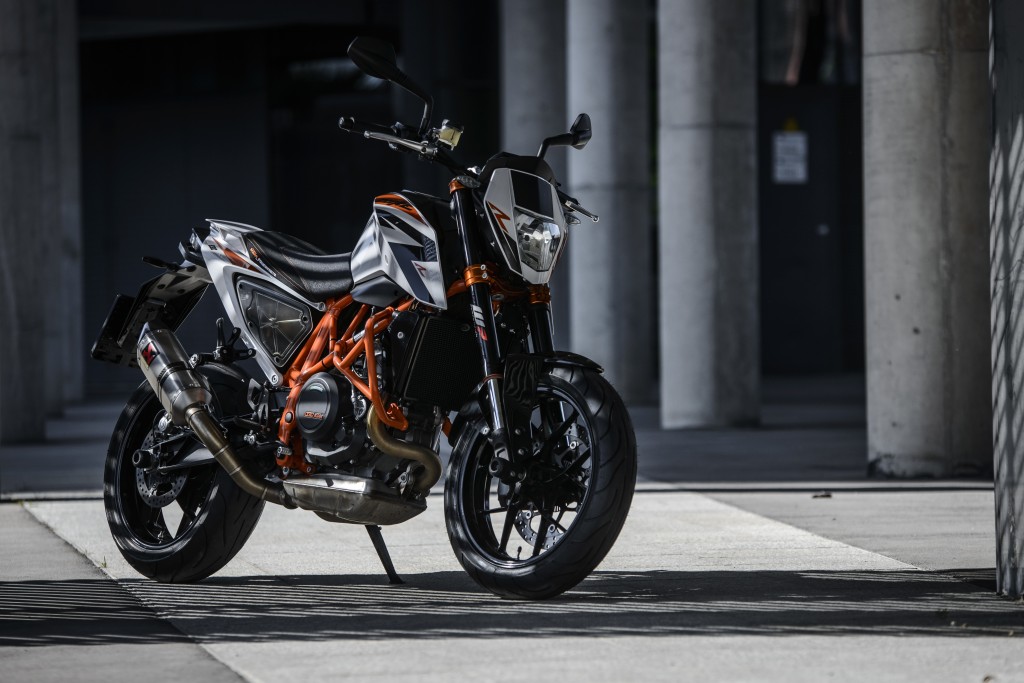 The reason the triathlon is happening in north eastern Spain is quite self-explanatory. “We decided on Barcelona for the weather as it was already snowing at the same time in Austria!” says Schliephake. “It was a good decision. It was a recommendation from Cesar Rojo, head of KTM Spain. We have a great subsidiary here and those guys really support us. So it was another advantage for coming to Barcelona.” 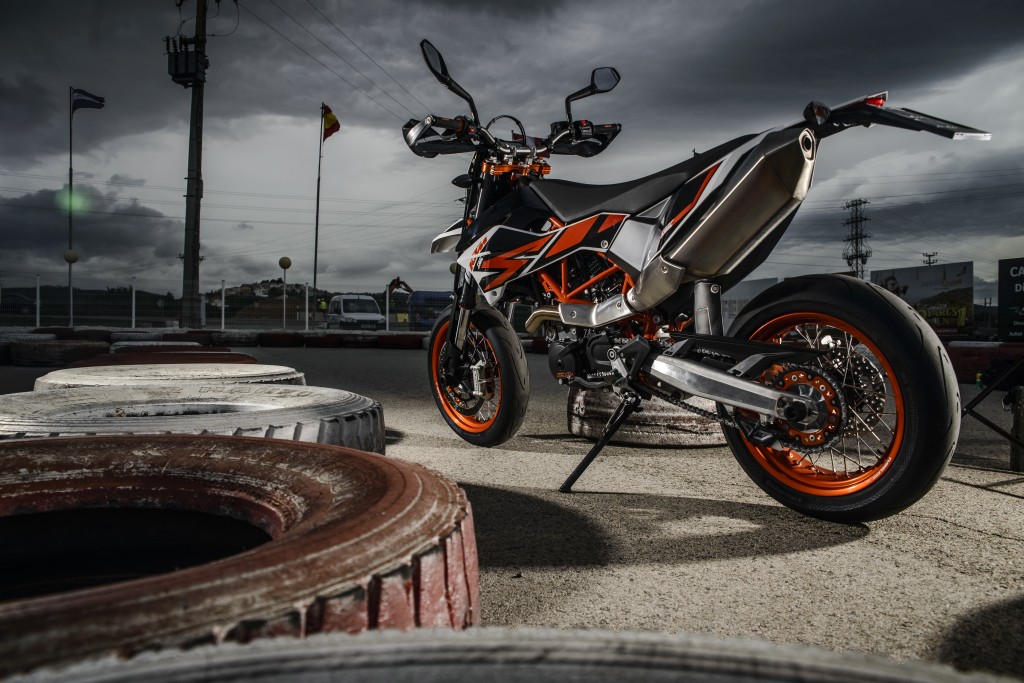 The KTM Blog turns up for the afternoon during the set-up phase. It means we miss out on the SMC R at the track but we get a long run on the new-engined 690 ENDURO R and enjoy putting that new ABS system to the test. More on the motorcycle in a separate story but our outing later on the DUKE back to the hotel base in the city gave a full appreciation of the LC4. It is an engine that has been modified over the years and tweaked to suit the motorcycling wishes of the masses; in short a versatile asset and it is little surprise that a creative mastermind in Austria put the idea of competition and the various motorcycles together. 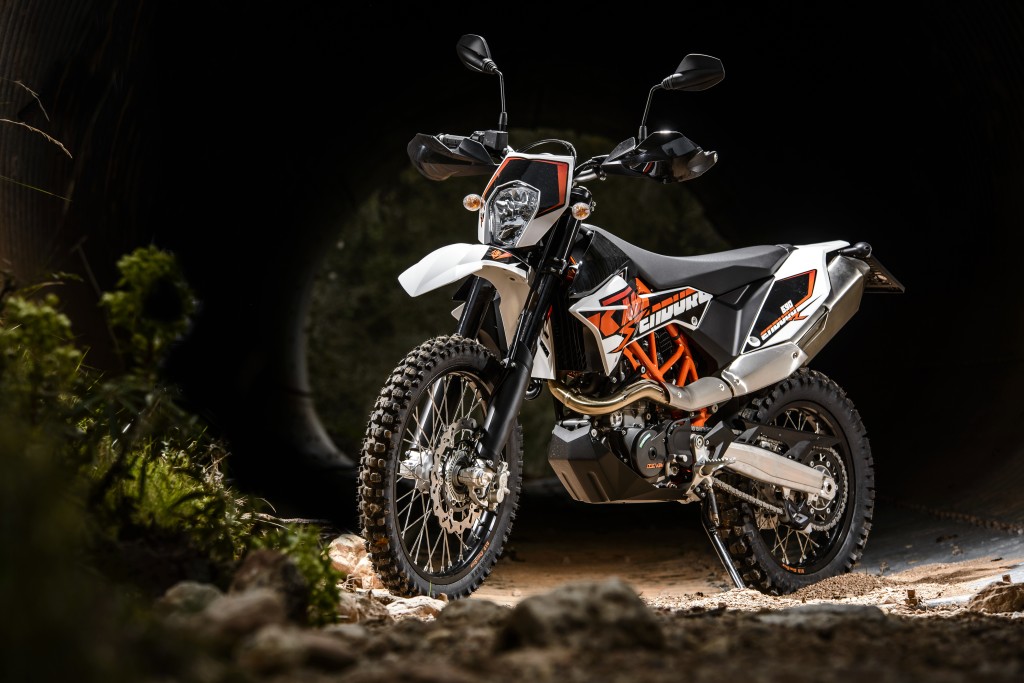 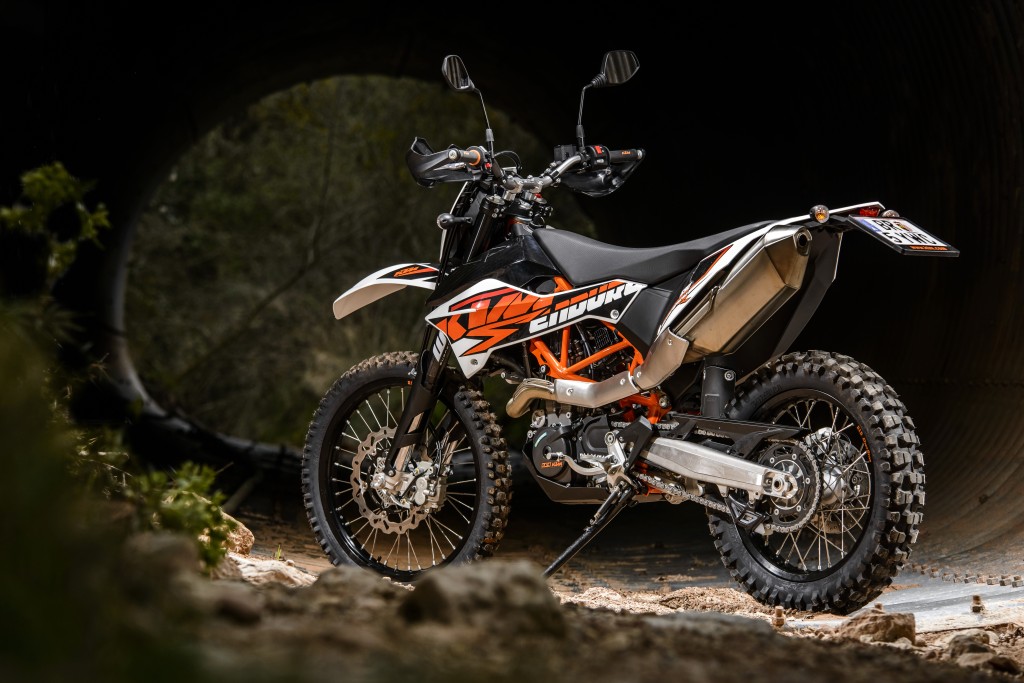 “KTM is focussing on so many milestone projects like the 1290 SUPER DUKE R, the 1190 ADVENTURE, the RC and bikes of the future and we didn’t want to forget about the LC4”, emphasises Street PR responsible Luke Brackenbury. “It is a very important model for us in terms of sales numbers and units. We wanted to try something different and offer the journalists three good examples of each bike”, he adds. “It is a tough and tight schedule focused on the sport; not like a typical bike launch. Everybody has to change twice to try the different bikes. We were thinking about a competitive element but if we gave out prizes for lap-times or races I reckon we might be in for a bike of trouble!” 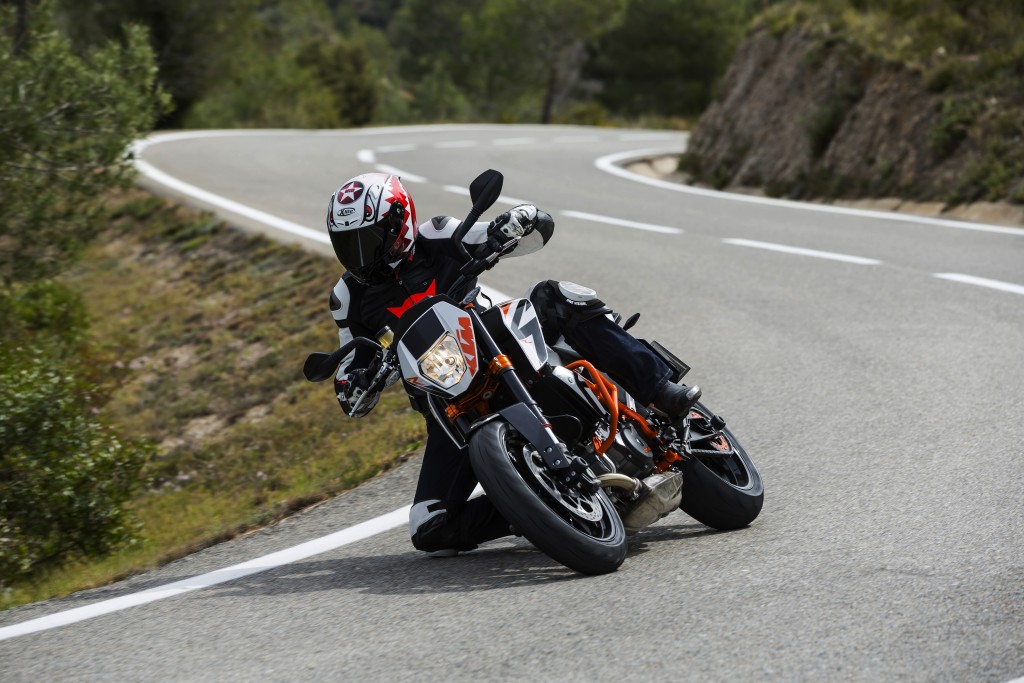 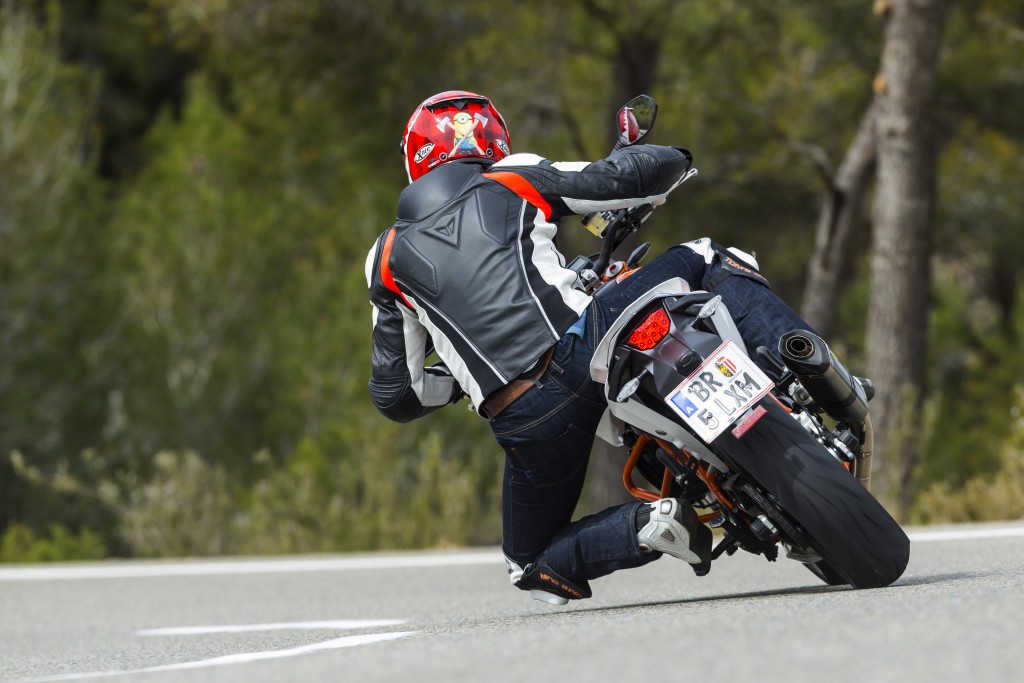 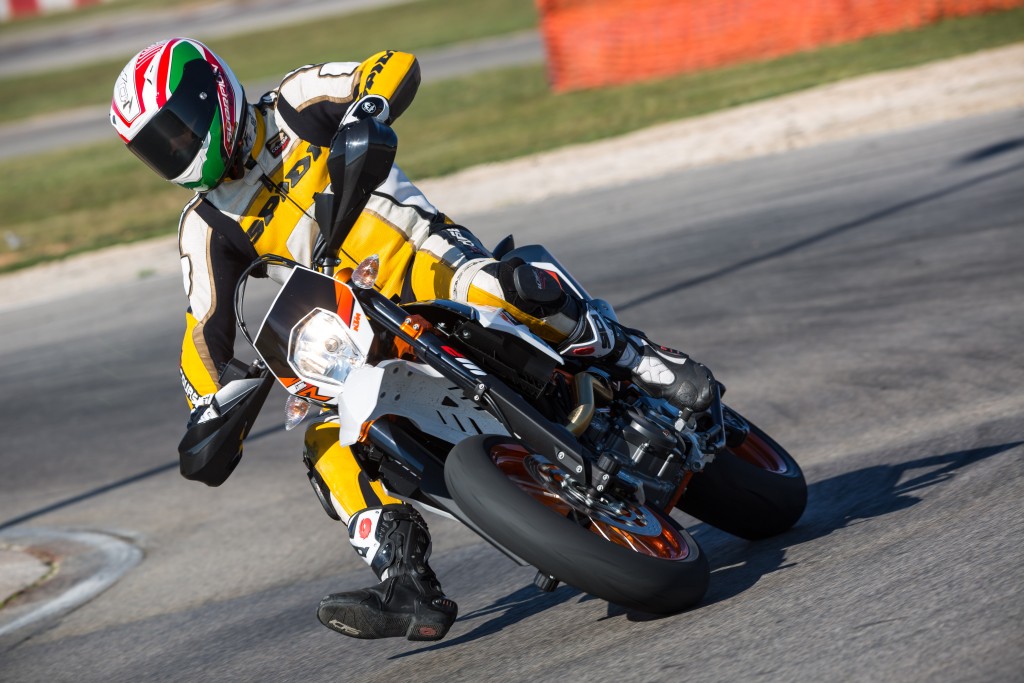 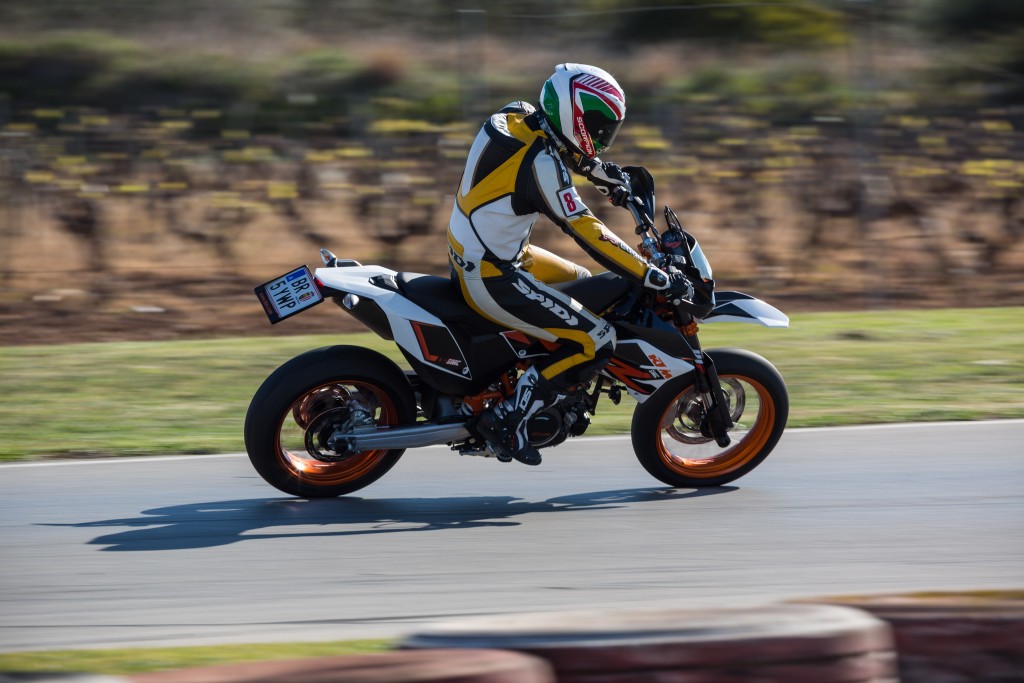 Despite some high winds to go with the sunshine, the LC4 dominates a pocket of the Spanish countryside for several days and provides a unique experience for a lucky few. “It was fantastic to ride three such different bikes in one hectic, singles-thrashing day”, says British writer and tester Roland Brown. “First I caned the 690 SMC R supermoto bike round a tyre-lined kart track, then grabbed a slice of tortilla before rumbling off down a rocky trail on the 690 ENDURO R. Then there was just time for an energy drink before we were off on the 690 DUKE R, which might almost have been an anticlimax if the local roads hadn’t been so superbly twisty and the light and rev-happy KTM hadn’t been so entertaining.” 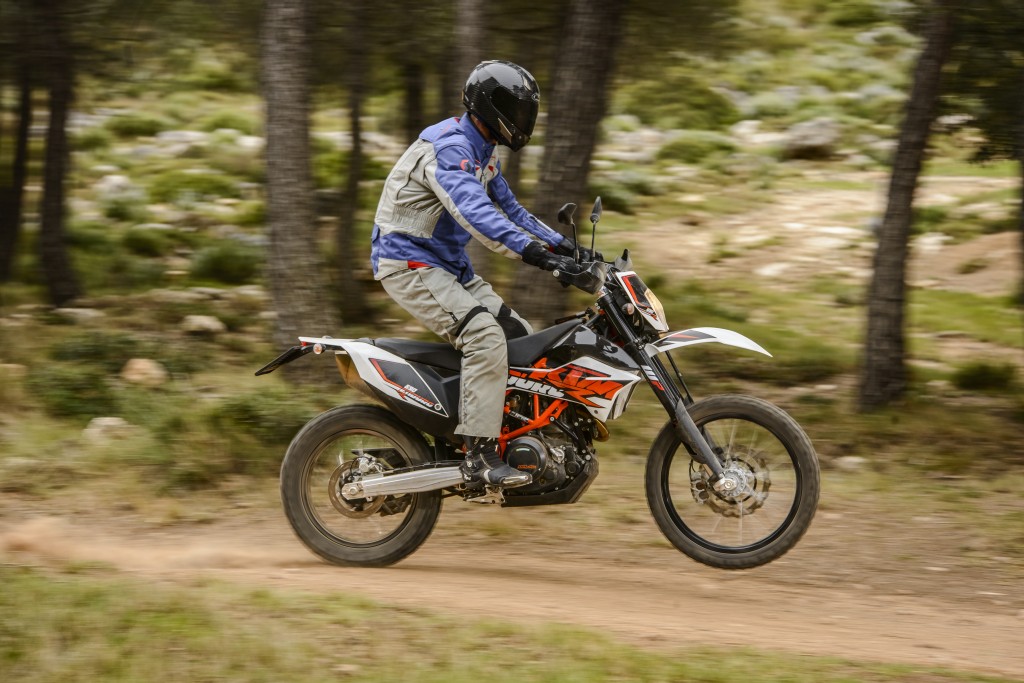 Until next year then…

119 Responses to On your marks: LC4 Triathlon gets out of the blocks