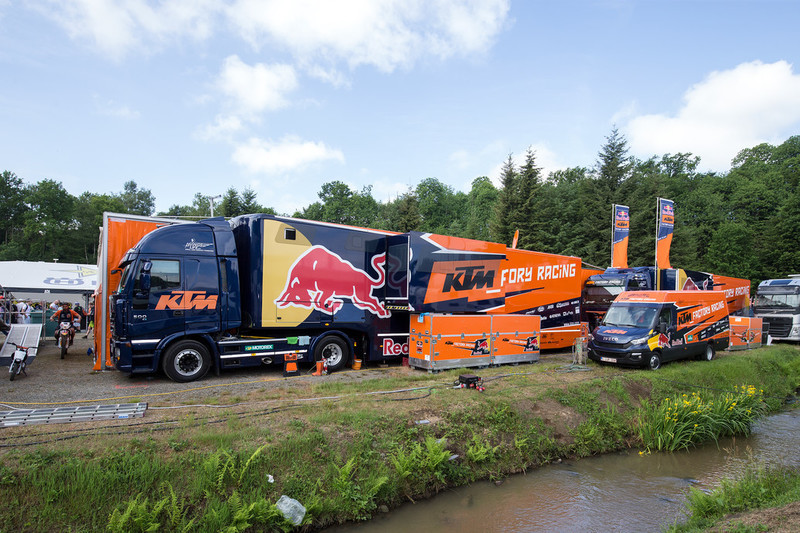 Packing and dragging the show: What’s in the MXGP race truck?

What do Red Bull KTM keep behind the doors of their Grand Prix motocross unit and how does the whole show hit the road? We ask Pauls Jonass’ mechanic Ryan Deckert to reveal all.

The FIM Motocross World Championship encompasses nineteen rounds, eight months, sixteen countries and four continents and the Red Bull KTM rig is rolling across tarmac for almost all of the European stint of the series – fourteen fixtures – accumulating almost 30,000km in the process. Five factory riders, ten bikes, spares, tools and living compartments for the race mechanics all have to slip into the two rigs. 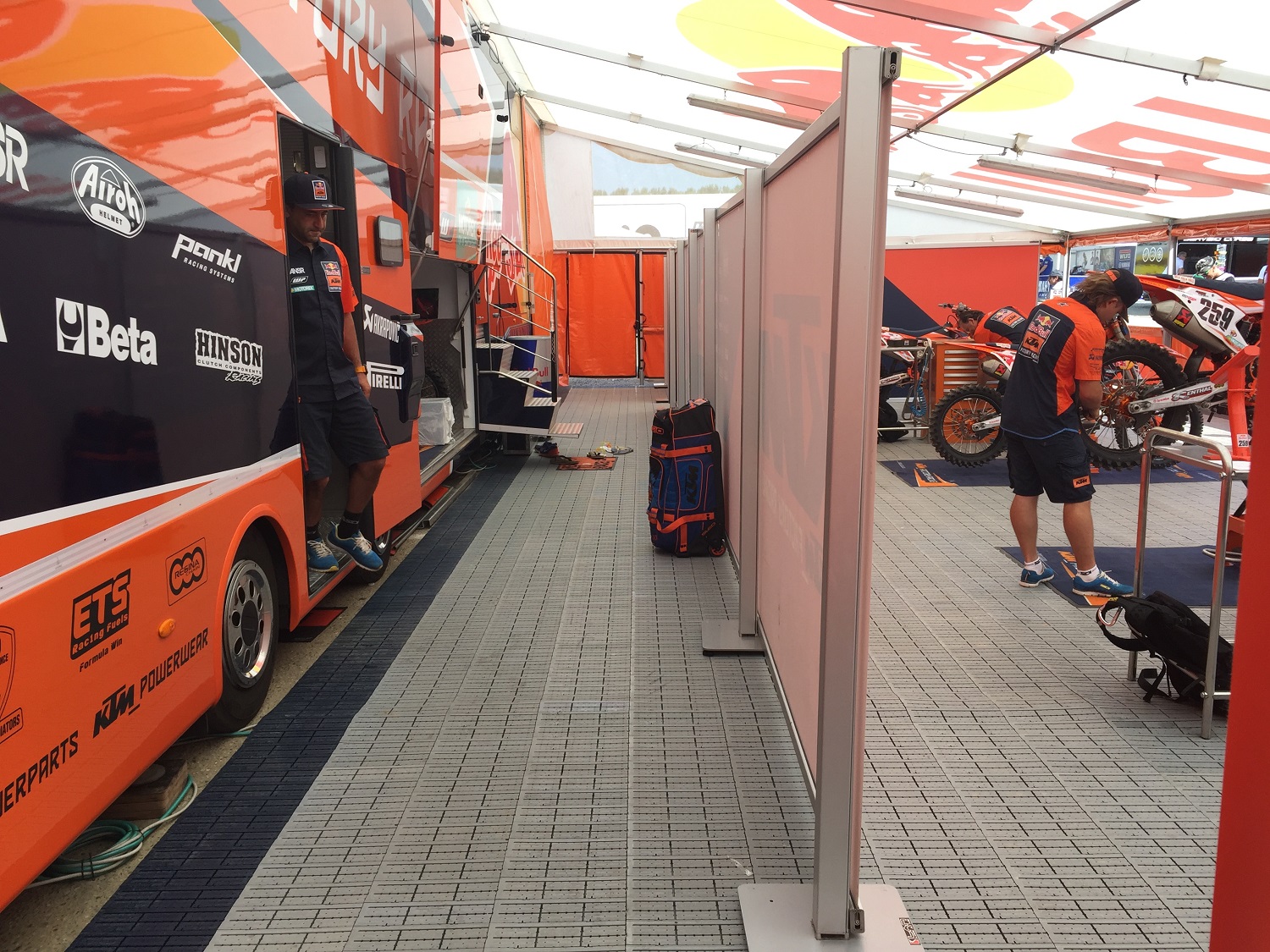 The MX2 side of the awning also houses the works KTM 450 SX-F of Jeffrey Herlings so space is at a premium and a careful process of packing and storage is required. Ryan managed to give us a small tour of what, where and how the factory team do their work at race circuits and on the road. “It’s quite new – just three seasons – so it is quite modern and some of the designs that worked well from the previous truck were incorporated into this one,” the Australian says of the setup.

First we journey into the main artery of the truck: the workshop space at the back. 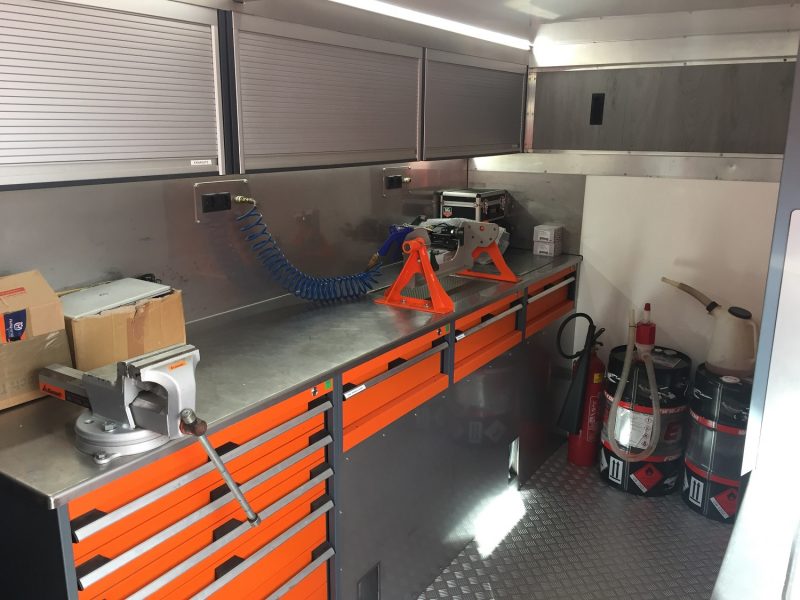 “This is where we store everything we need for a weekend of racing, and we keep it as well-stocked and loaded as possible because it can be on the road for some time and perhaps doesn’t return to HQ in Austria between the races,” Ryan says. “Each mechanic has a set of tools and we have some special equipment to be basically able to do anything that we need to back at base.” 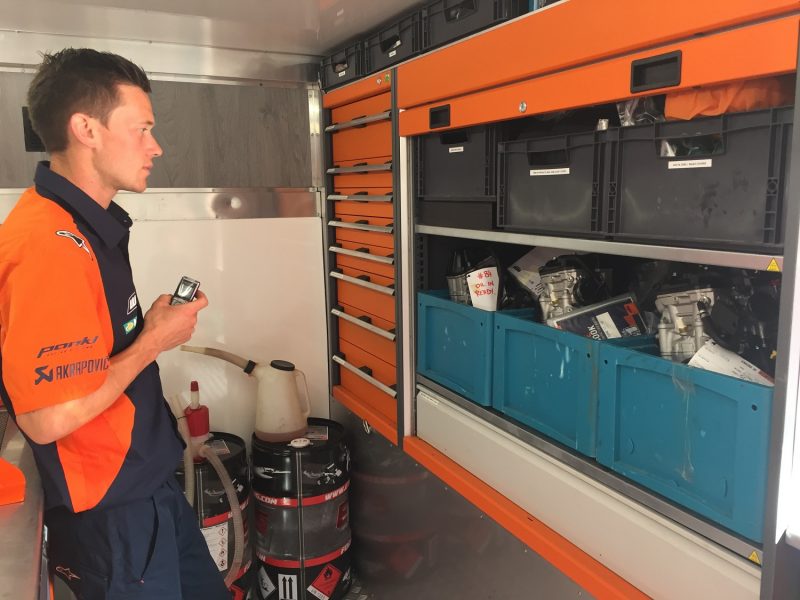 “This is probably the most expensive cupboard! It has all the spare engines. For the 450 we carry two and for the two 250 bikes we carry four; which is a lot but when the truck is on the road it is good to have that extra cover. Touch wood: we never use them. Normally we are covered but if there is an emergency then we can get something couriered or we jump in the sprinter van and get back to the workshop.”

“We have drawers for engine tools, specialty tools and spares like sprockets: we basically carry everything to be able to build another bike from the ground up. The cupboard on the walls will fit spare silencers and exhausts. We’ll have three spare ones for the 250 and two for the 450 and that’s enough because you also have the spare bike there ready.” 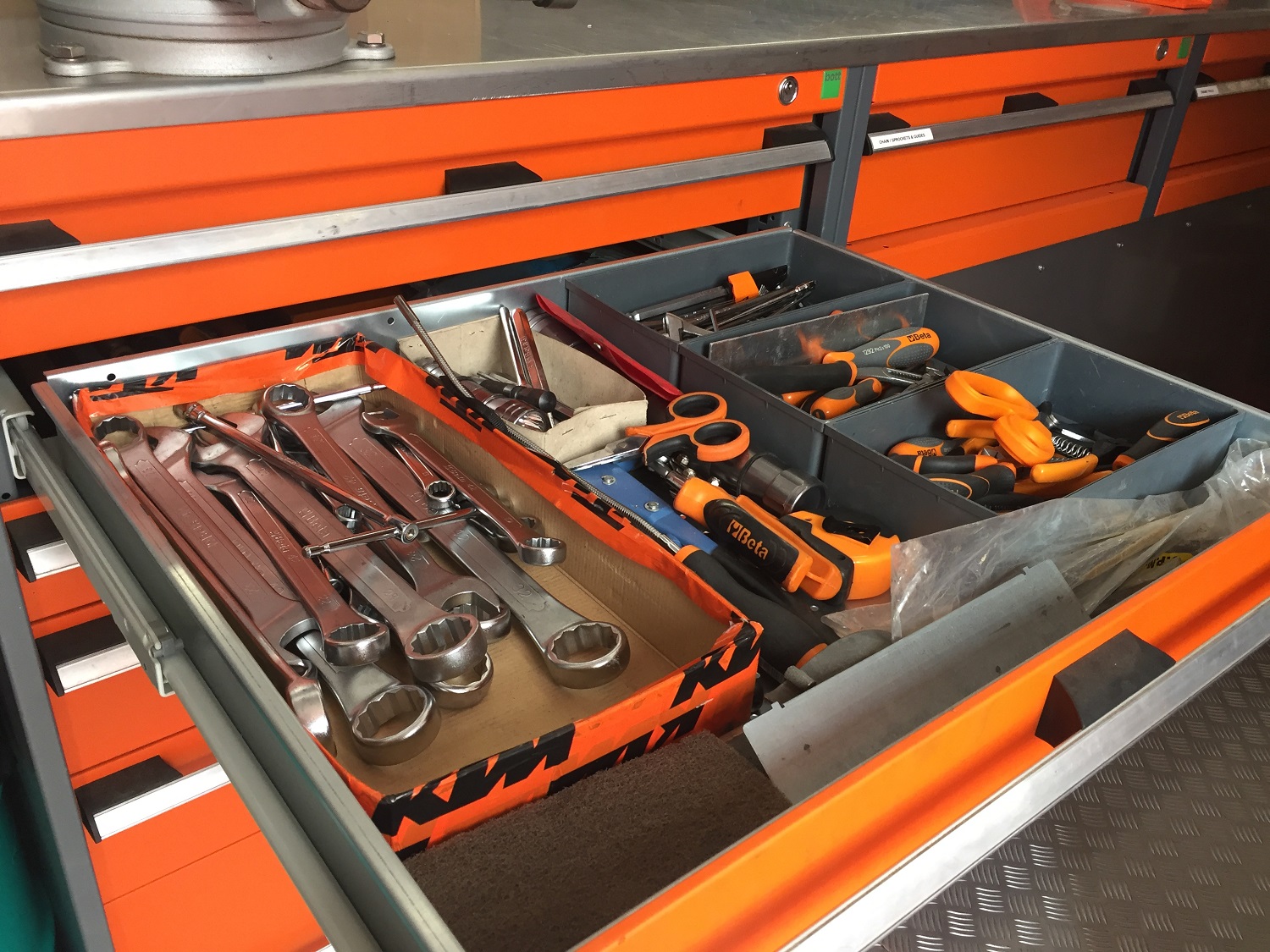 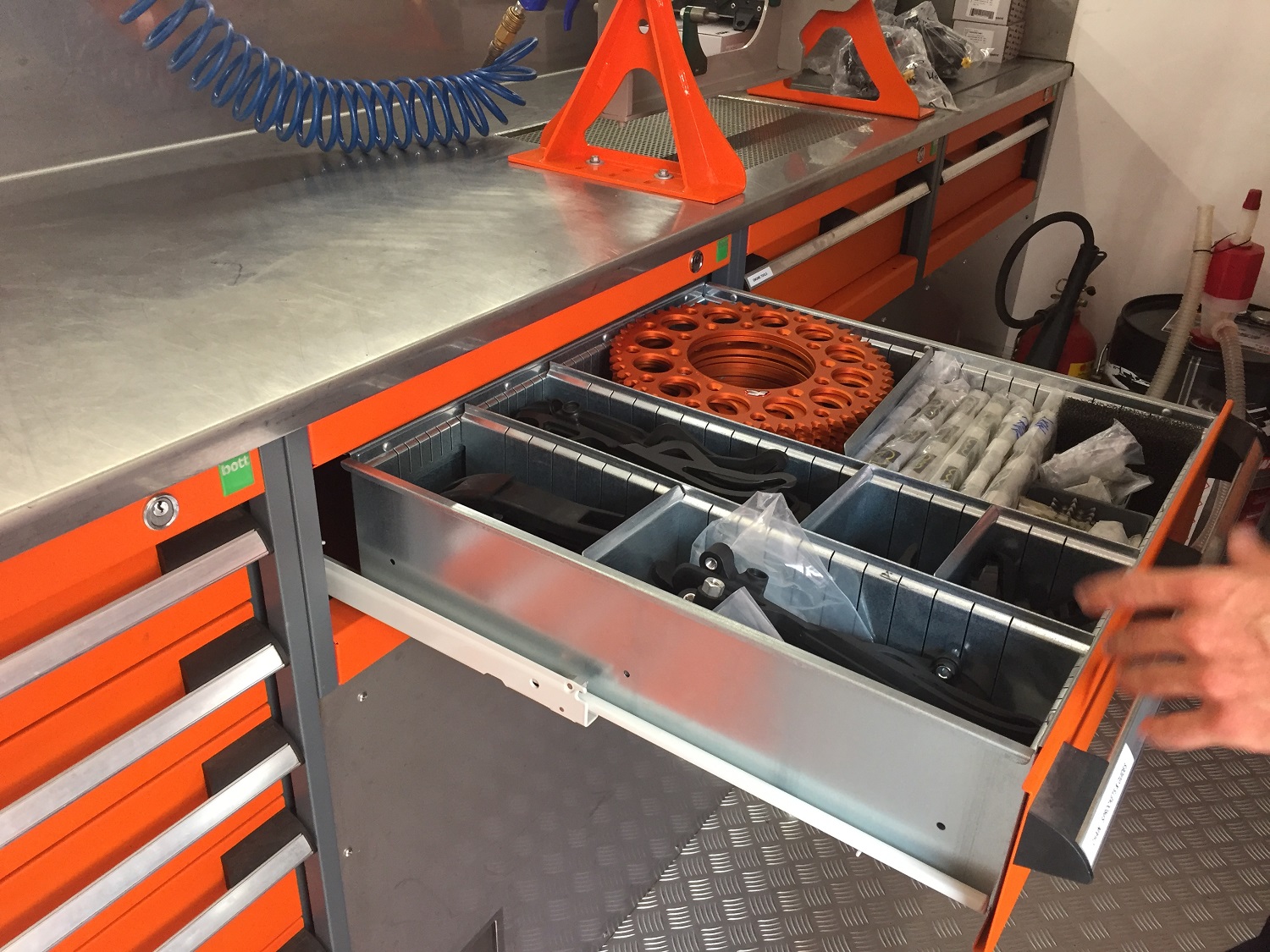 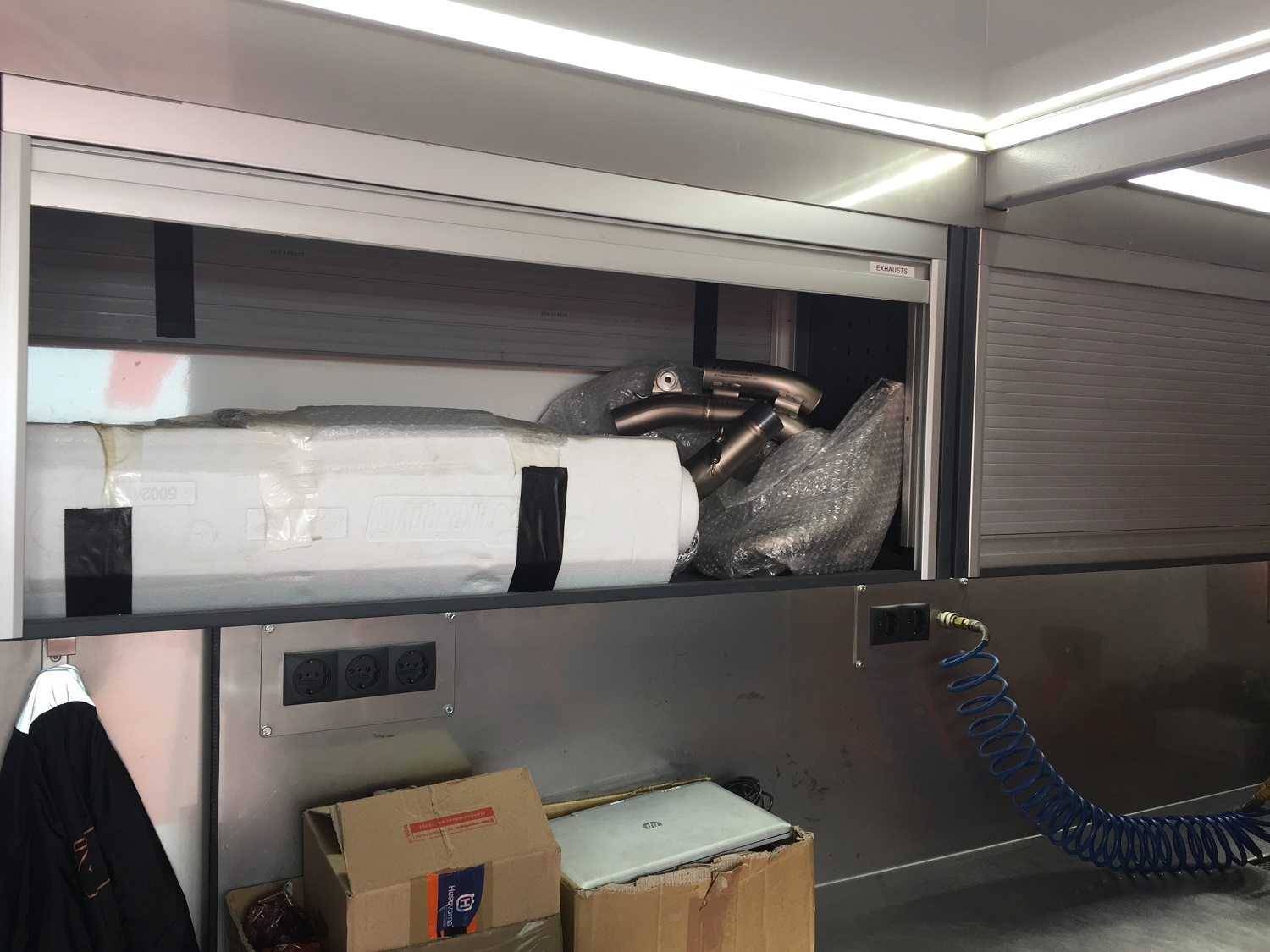 “There is an upstairs compartment with a rack where we put spare plastics, fuel tanks, sub-frames and around four-five drums of race fuel. That space will also house all the banners, backdrops and poles for the awning. The flooring is piled up and fills the workshop space and with back-to-back races with a lot of distance, like Italy to Portugal, then two extra bikes will also squeeze in.” 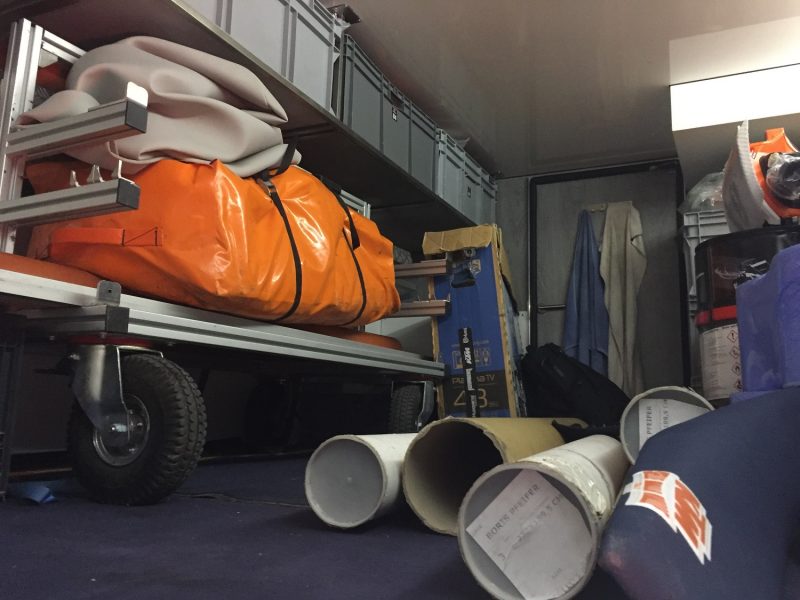 Moving out and further along the truck we reach the garage section. “This is the bike bay or the garage,” Ryan says. “At the moment it has a lot of Jeffrey’s stuff in it! All the spare wheels are racked here. We fit four race bikes plus our pit bike and the toolboxes go into the corner. The bikes are loaded fully built: they leave the factory race-ready, which is very handy because you don’t want to pull them apart to load them up. We carry two sets of wheels each – so six – plus the spare bike so each rider has four sets. You can fit a lot in here.”

“We don’t use usually carry the riders’ gear because the truck will head back to Austria after a race and most of them are based around Belgium. Jeffrey has his stuff here now but that will have been brought by WP and Pauls has his own camper so all his bags will be there. His camper will be driven but Pauls will fly and Jorge is the same. Generally we just carry the bikes and what we need.” 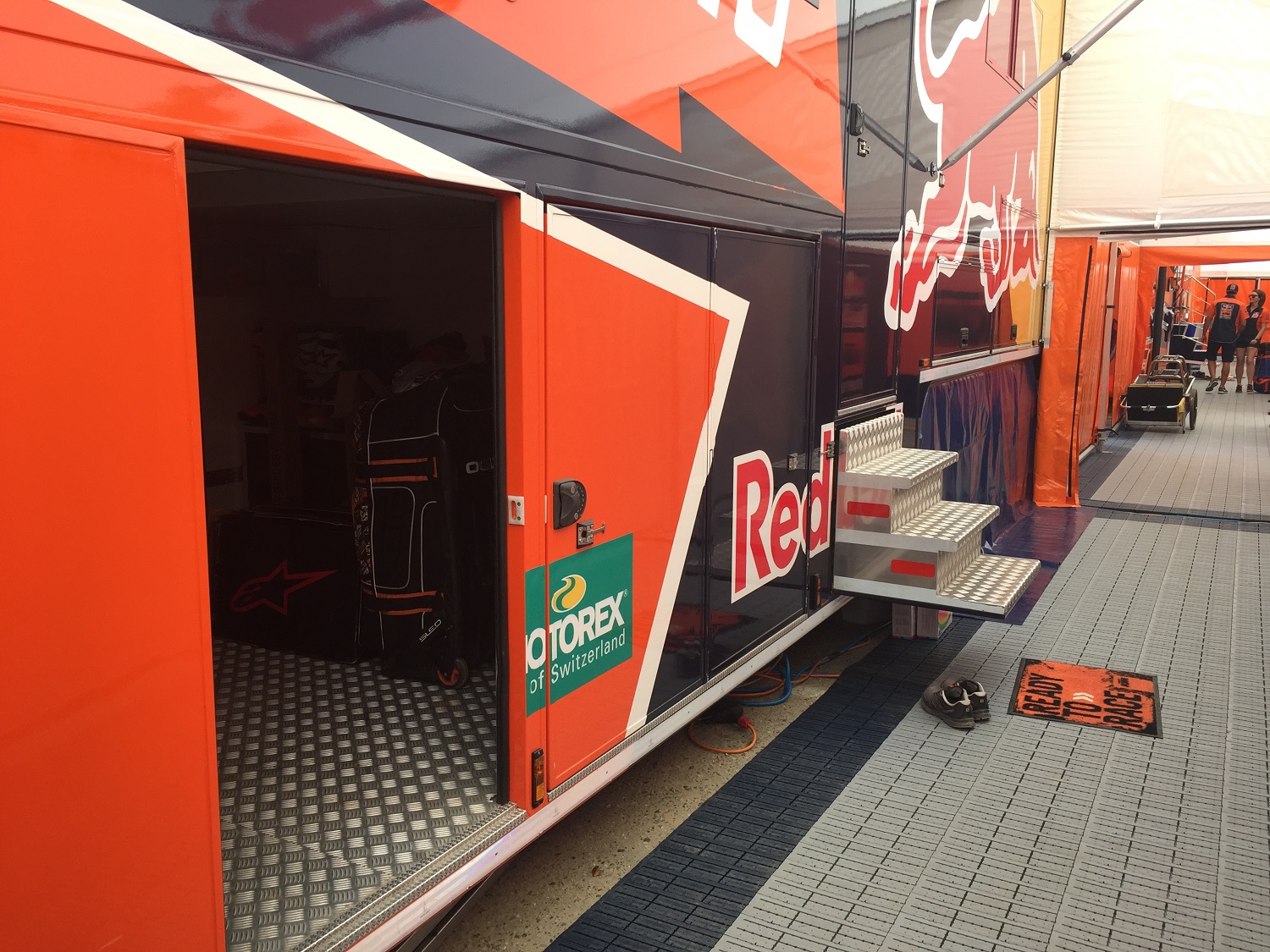 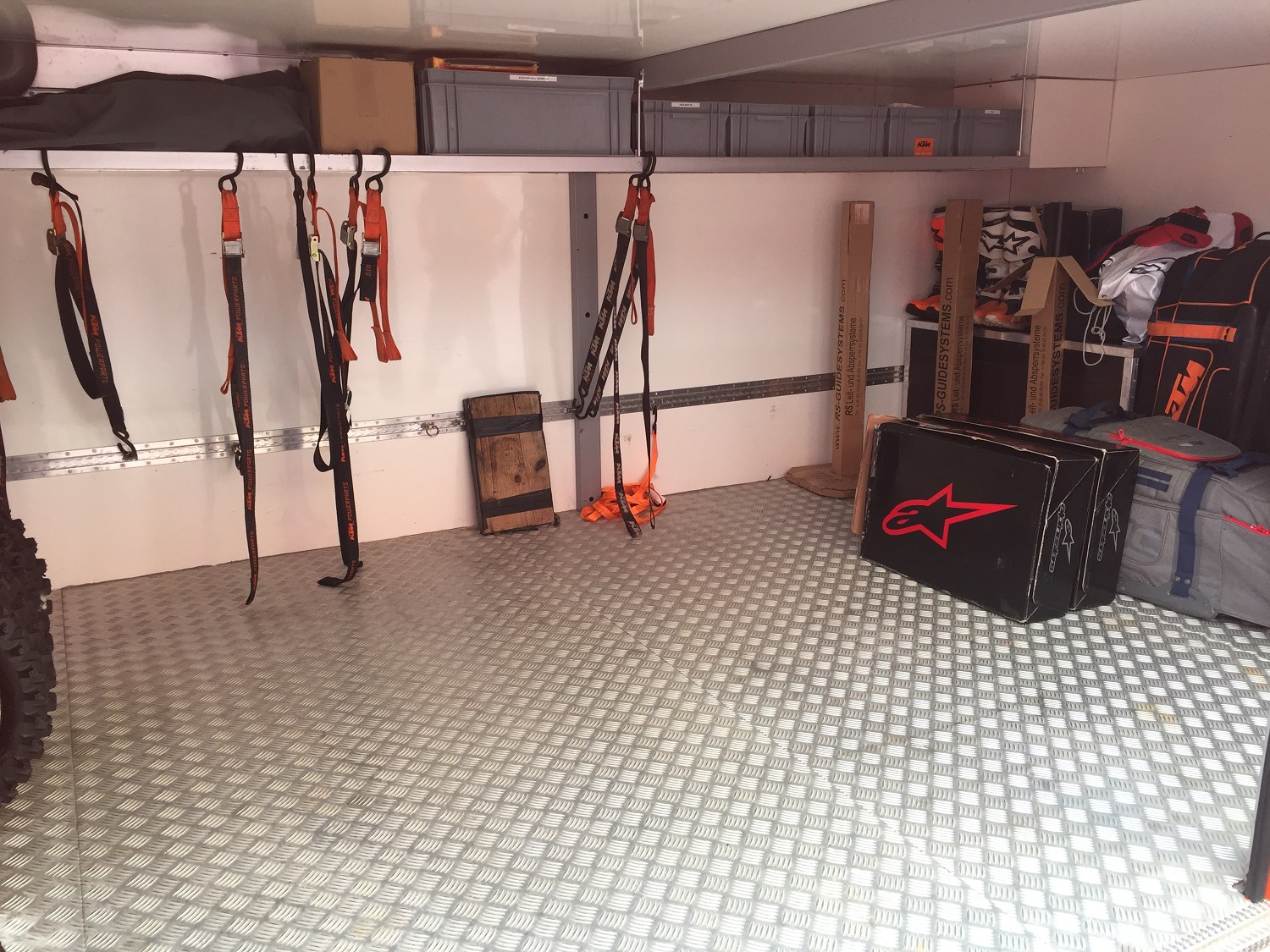 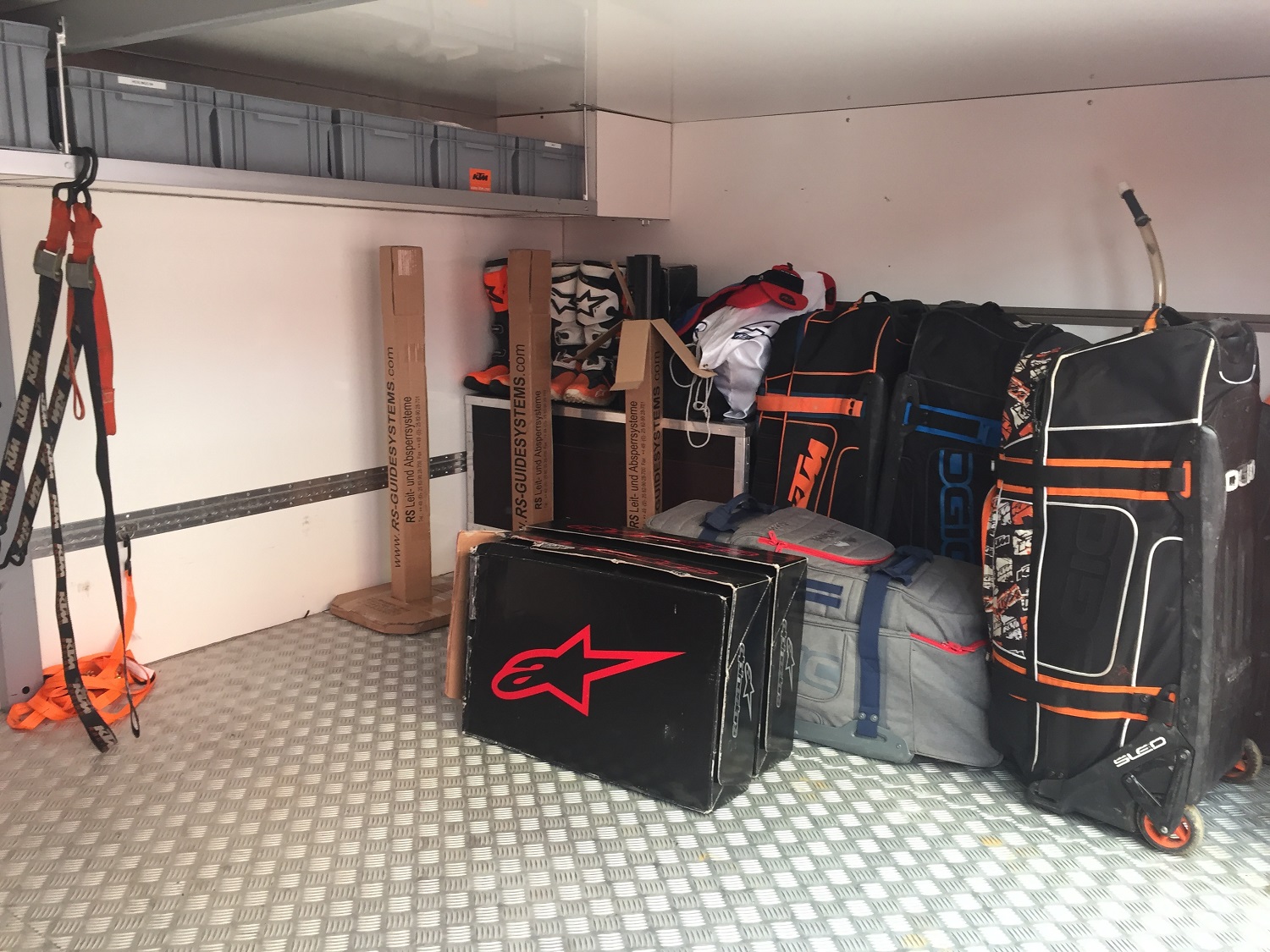 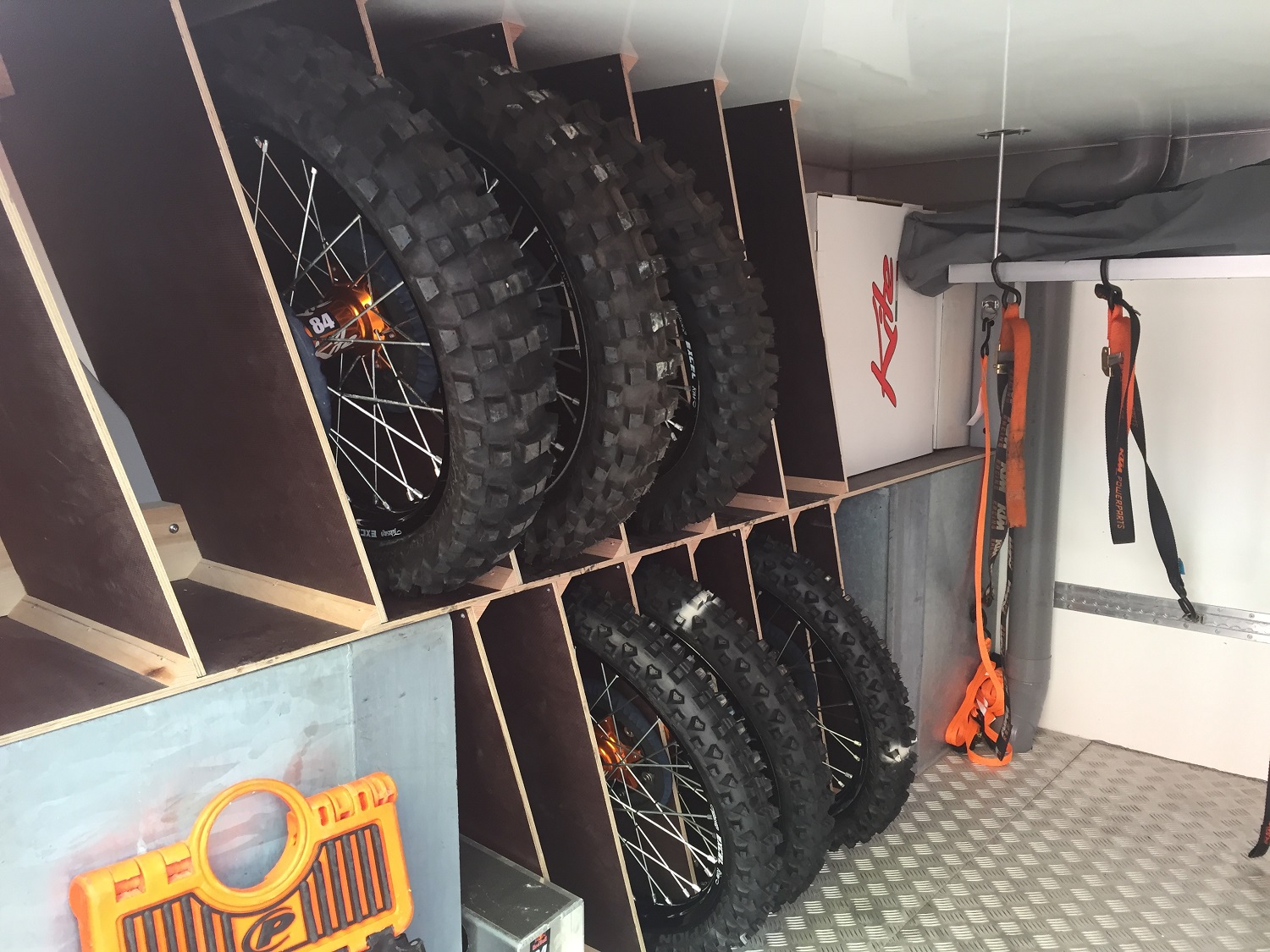 The last section is a more personal. A dark grey interior is the area of respite from racing and the paddock with a kitchen, lounge and four bed ‘pockets’, one on top of the other (that actually look a little tricky to get into), with their own door shutters and lights for a little privacy. “Four of us sleep in the truck and it’s really comfortable: there are four sleeping compartments, bathroom, toilet, and everything else you need to have a break. There is a big slide-out so we have a bit more space.”

A living, working, hauling and operational base: the Red Bull KTM truck is very much the hub of the MXGP setup. “To pack everything and have the truck ready to pull out of the paddock probably takes around two hours with the amount of people we have,” Ryan concludes. “Generally setting up takes a bit longer but there is no rush at the start of a Grand Prix and there is usually five-six of us around. You can always use more space! With more items and bannering under the awning then sometimes you need to get creative with the packing but it all works well.” 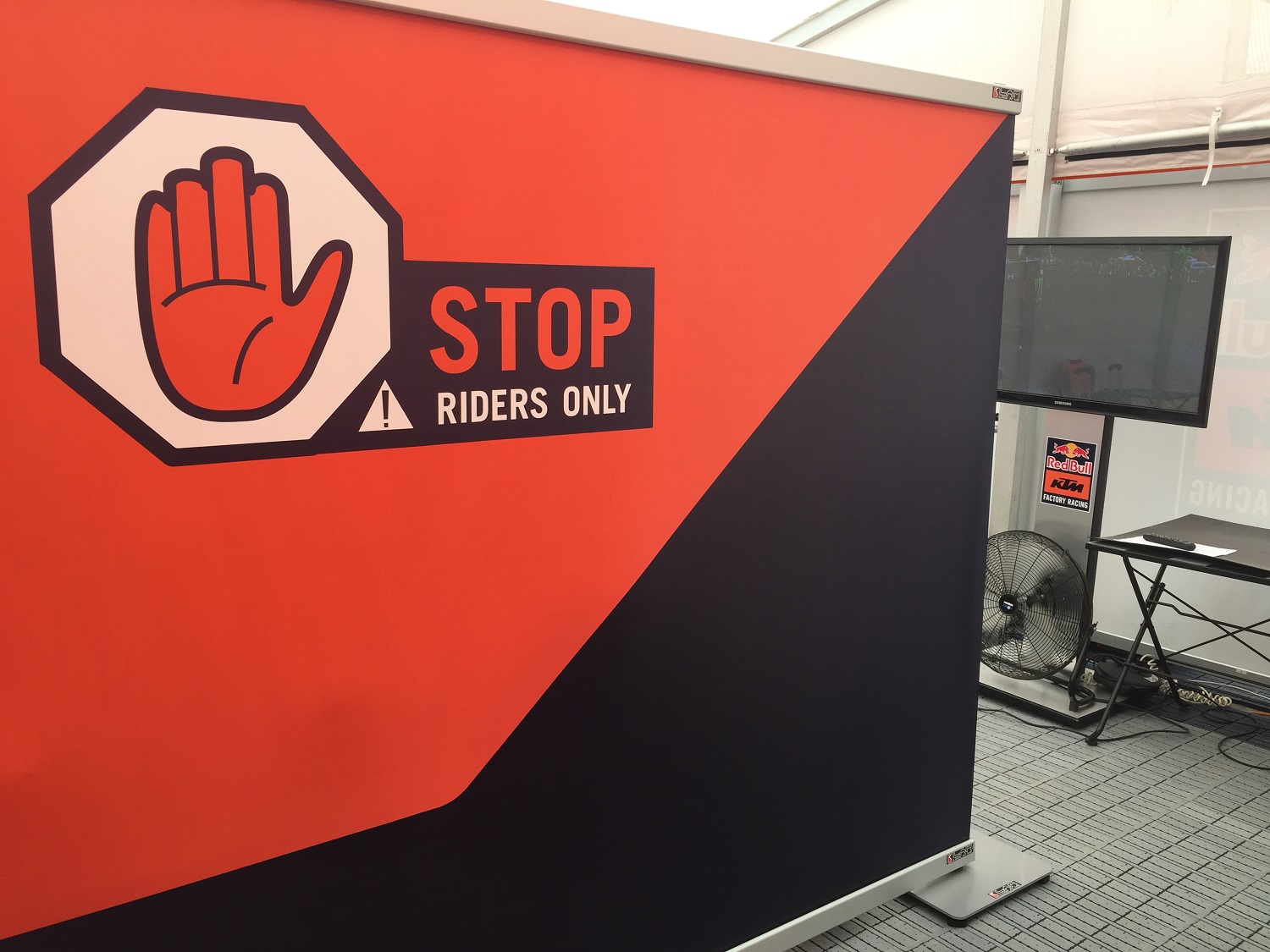 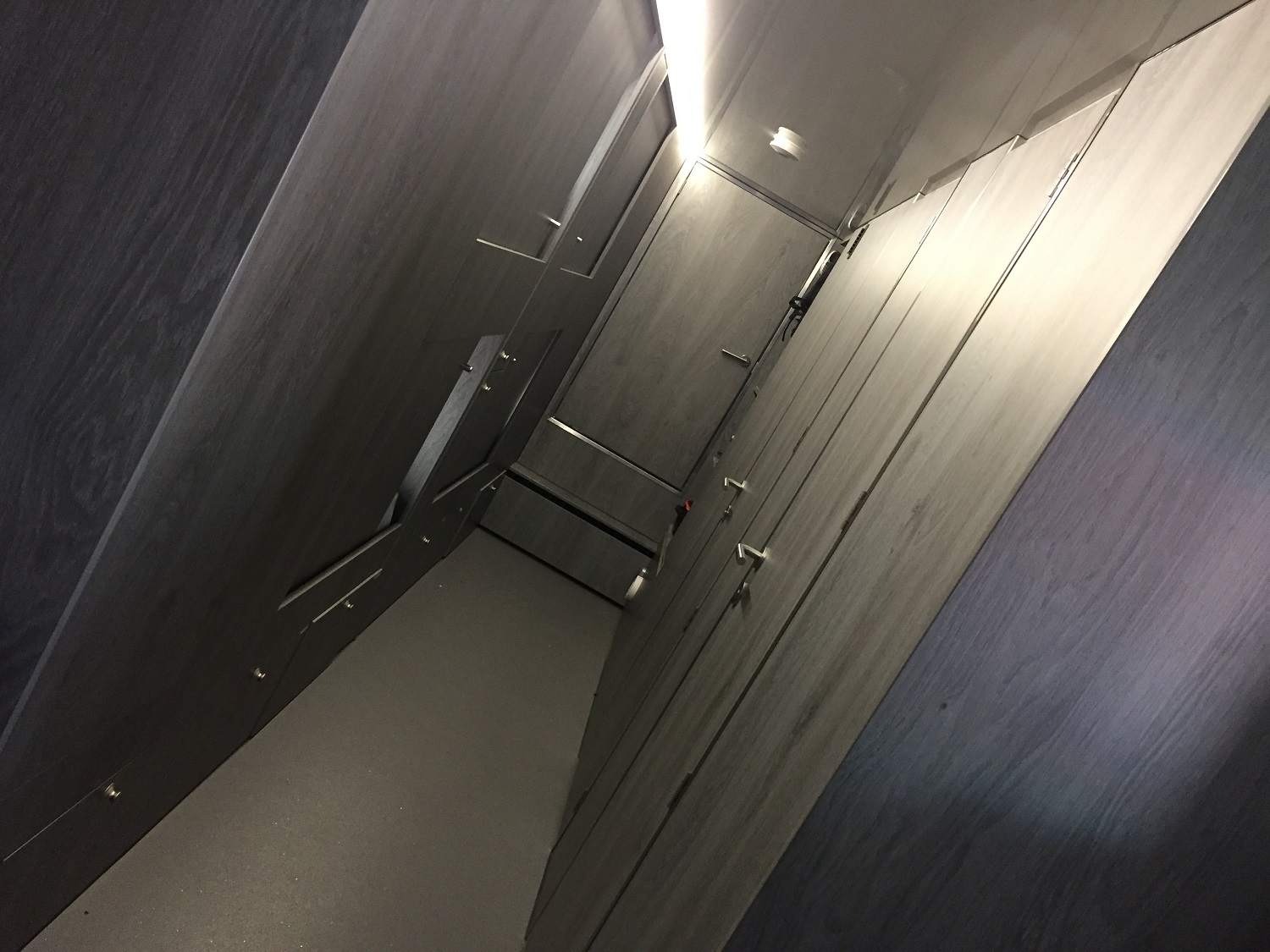 46 Responses to Packing and dragging the show: What’s in the MXGP race truck?