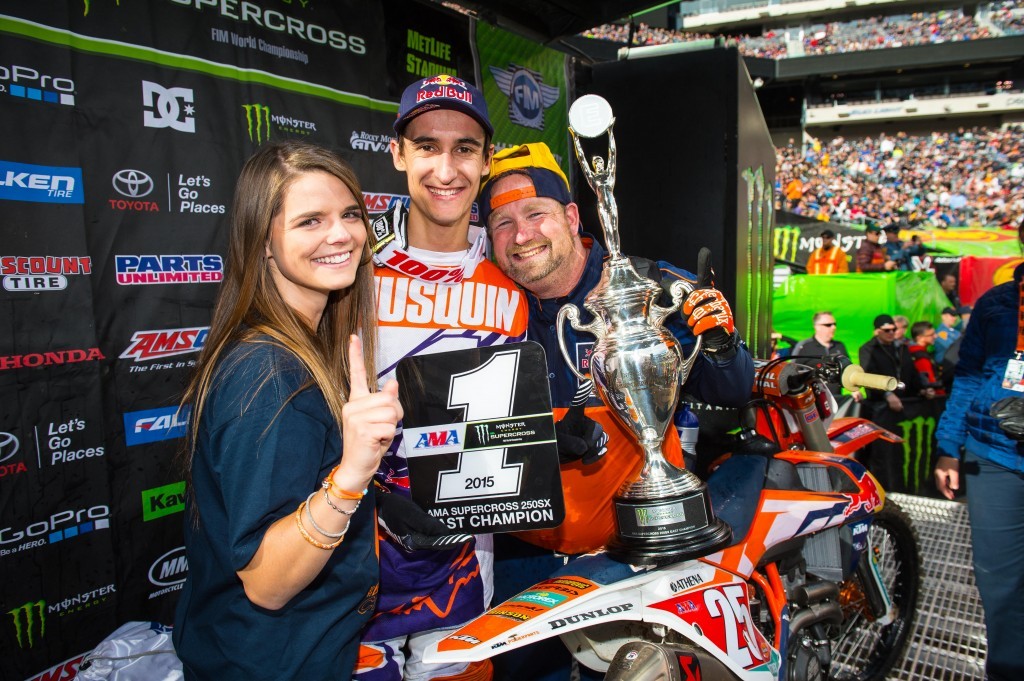 In 2014, Red Bull KTM Factory Racing rider Marvin Musquin experienced up and downs. After missing the entire 2014 Supercross championship due to injury he showed strong performances at the end of the motocross outdoor season, in which he finished fourth overall and was crowned the first-ever Red Bull Straight Rhythm winner of the 250 class in October. For 2015, the Frenchman certainly had his eyes set on the main prize in the East Coast series. 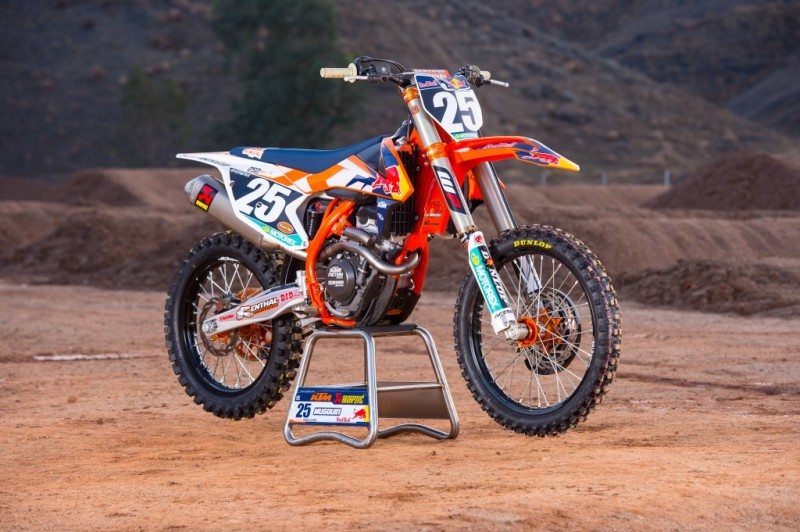 Rd. 1, Arlington – Flying high
The East 250 Supercross Championship started off in Arlington´s AT&T Stadium. After a difficult 2014 Supercross season which Musquin missed due to injury, he spent the off-season restructuring his training program to return even stronger in 2015. In the race he pulled a huge holeshot and even managed to escape from the rest of the field to gain the first win of the season by impressive five seconds which was celebrated up in the air with his heel-clicker signature move. 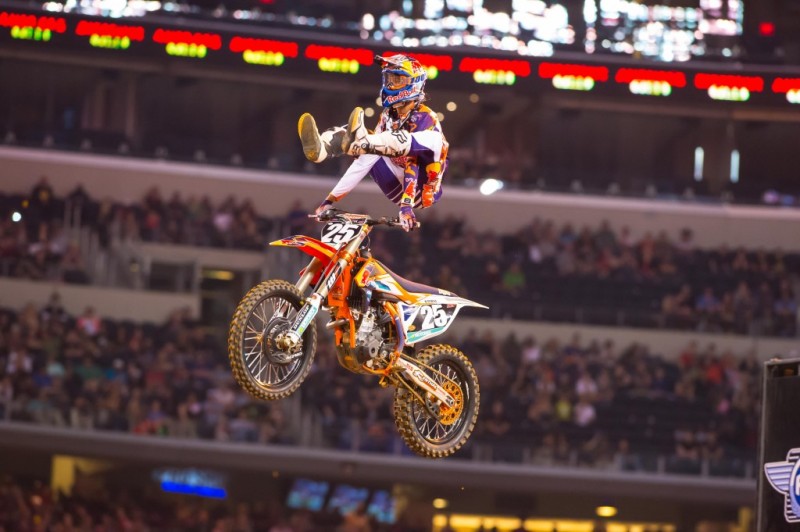 Rd. 2, Atlanta 1 – Seeing red
At the Georgia Dome in Atlanta Musquin raced to a second place finish after a hard fought race, narrowly missing his second win of the season. His second podium finish allowed him to remain the points leader with a four point gap over his closest rival and for the first time he held the red number plate on his KTM 250 SX-F Factory Edition heading to Round 3. 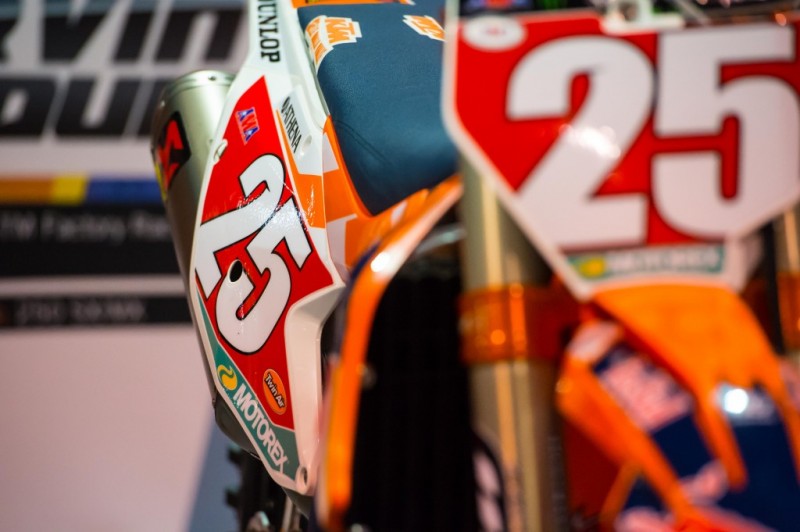 Rd. 3, Atlanta 2 – Marvin marvels
At the second race in Atlanta Musquin pulled a massive holeshot and got a good start. After leading the field in the opening lap, the Frenchman never looked back and went on to lead every lap of the 250SX main event to pull-off his signature heel-clicker six seconds ahead of the second place rider and celebrate another impressive win to maintain a seven points lead in the championship. Just the first of two more consecutive double wins for the Red Bull KTM Factory Racing Team and Musquin´s teammate, the reigning 450 Supercross World Champion Ryan Dungey – something Marvin Musquin could obviously hardly believe. 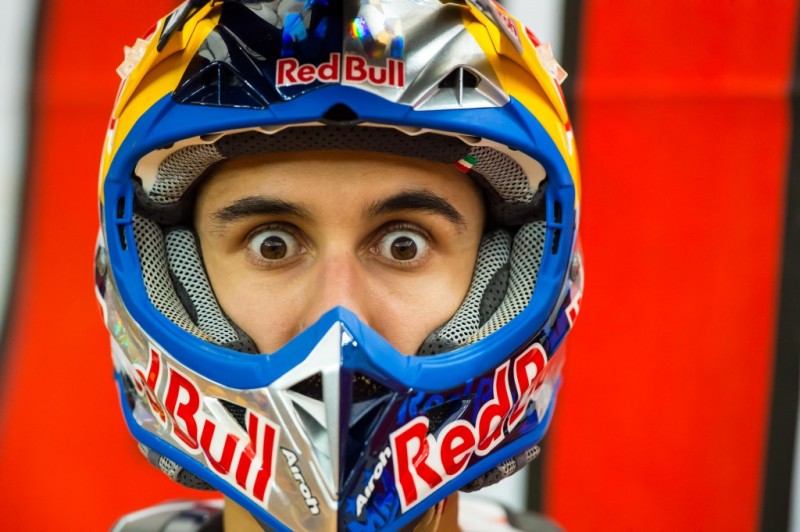 Rd. 4, Daytona – On the fast track
Already in the training sessions Musquin proved that he was the man to beat in Daytona putting down fast lap times in each practice session. In the main event Musquin pulled another massive holeshot, rode a mistake-free race and put time on the field each lap. He continuously stretched his lead further and went on to lap up to 13th place before crossing the line to collect his third win of the season. Another strong proof why he has held the red plate since the beginning of the season and stretched the lead to twelve points. 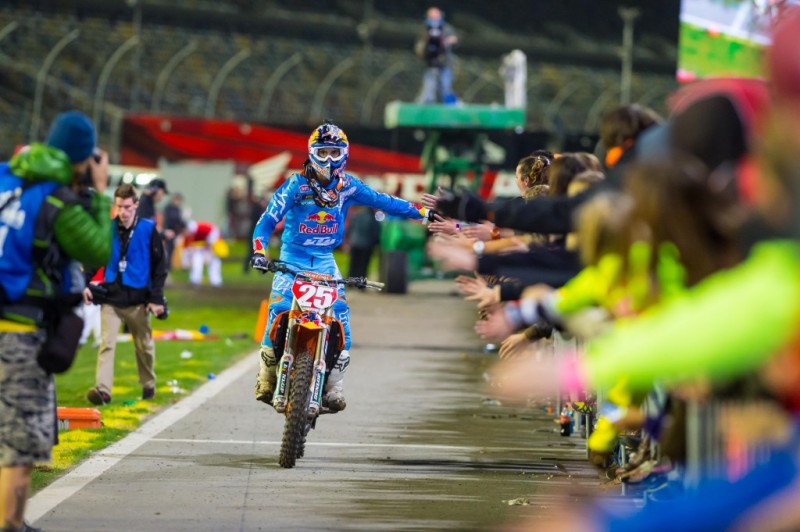 Rd. 5, Indianapolis – Hattrick completed
Round 5 held at the Lucas Oil Stadium in Indianapolis Musquin was in a league of his own after moving into the lead and pulling a massive gap on the rest of the field to secure his third consecutive win by a margin of 22 seconds and maintain the lead in the championship by 13 points. 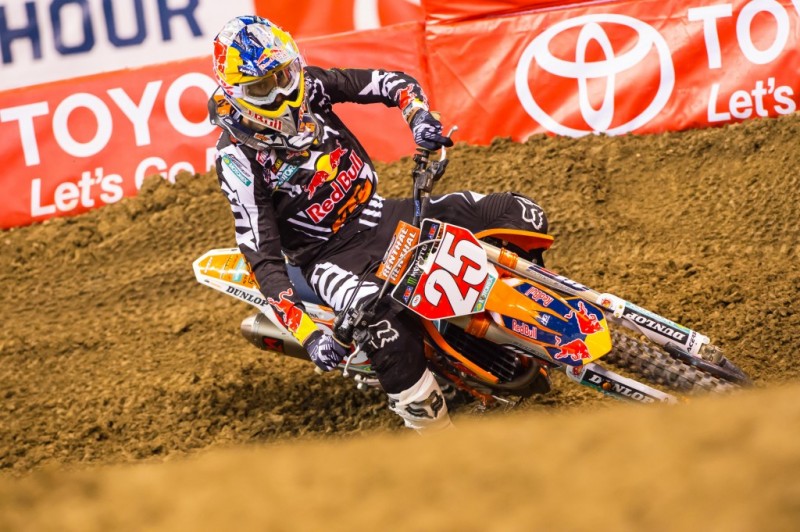 Rd. 6, Detroit – Be happy
Only for the second time of the season Musquin didn´t finish on the top step of the podium, but no reason not to be happy! Musquin made the best of it collecting as much points as possible; finally a second place is not a bad result for somebody who is fighting for the championship and remained the overall points leader in the series by 13 points. 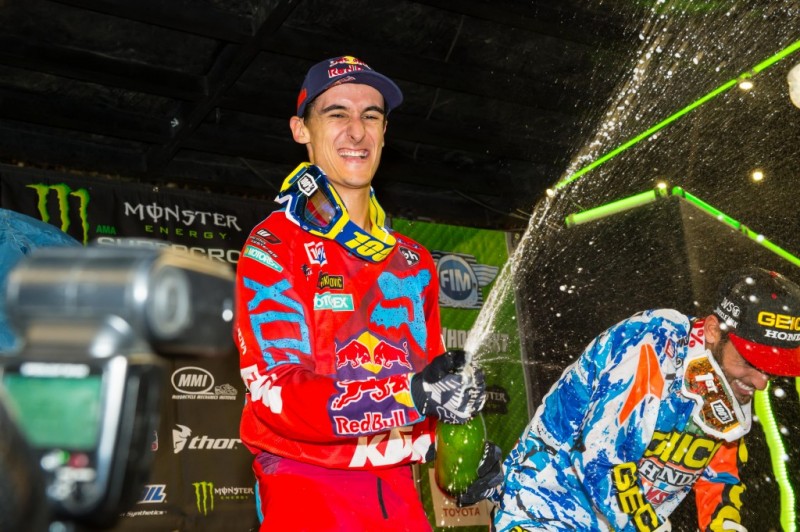 Rd. 7, St. Louis – Premonition
In front of a packed Edward Jones Dome Musquin quickly cut under the top rider after the start and moved straight into the lead. Musquin never looked back  on his way to take the win and led every lap until he crossed the checkers three seconds ahead of the competitors. With only two races to go Musqin is 20 points ahead in the championship. Any doubts about the future champion? 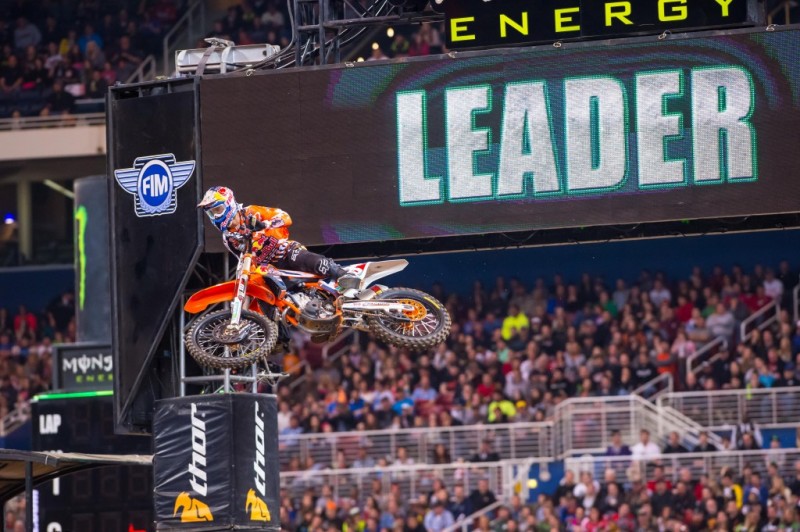 Rd. 8, New Jersey – Champion
In the last race of the season at the Metlife Stadium in East Rutherford, New Jersey Musquin proved why he is a worthy champion. Although he suffered a crash at the beginning of the race he didn´t give up, constantly closed in on the lead rider to crown a great season – six wins and two podium seconds – with the race win and the 2015 East 250 Supercross Championship title, which he celebrated with his wife Mathilde and his mechanic Frank Latham. 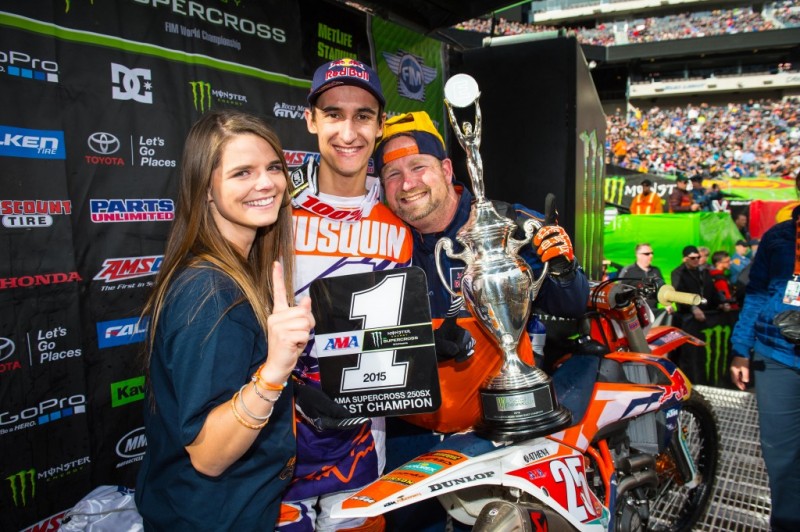 37 Responses to Perfect season: Musquin Can!