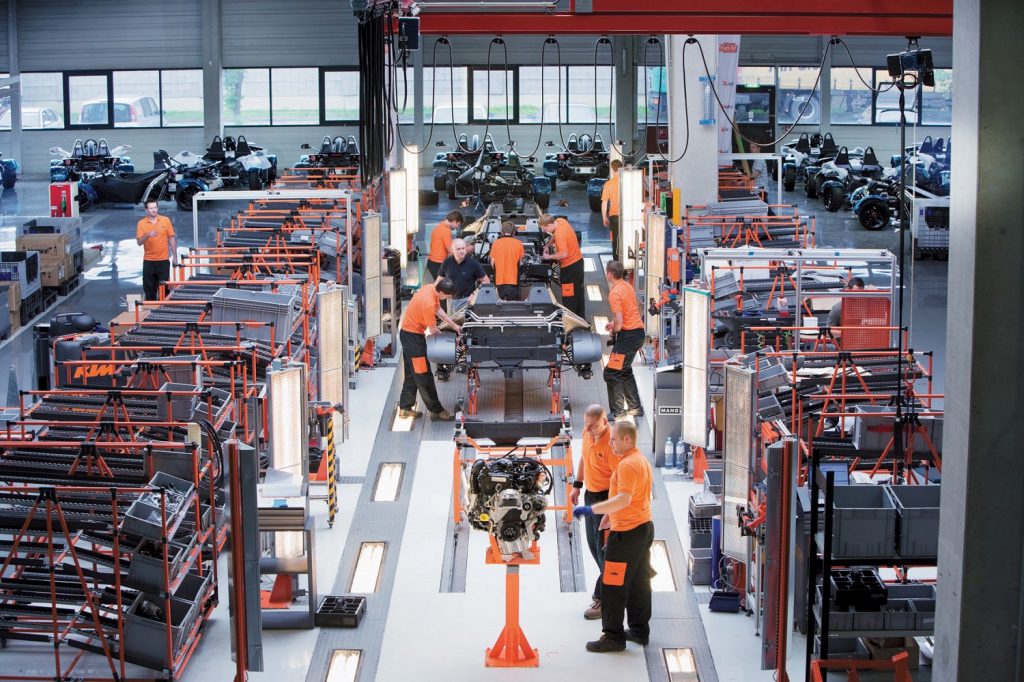 Production of the KTM X-BOW at the Graz facility

Since 2008, the KTM X-BOW super sports car has been manufactured at a small but highly-advanced production facility in Graz, Austria. A key reason for this choice of location is the “Auto Cluster Styria” that has developed in and around the Styrian state capital. International companies such as Magna and AVL are headquartered here, and countless other suppliers have played their part in establishing Styria’s high-tech hub. “High-tech” also happens to be the perfect phrase to describe the KTM Sportcar GmbH.

The decision to build KTM’s first car at the Graz production facility was made way back in 2007. KTM’s development partner Dallara couldn’t guarantee the required number produced cars, and Stefan Pierer, KTM’s chairman of the board, decided in discussions with designer Gerald Kiska, the spiritual “father” of the KTM X-BOW, to rule out an outsourcing agreement with Magna as well. And so, in early 2008, an existing warehouse in the Graz-Messendorf industrial district was leased and quickly modified to meet the requirements of a modern manual/small-series production facility.

Michael Wölfling, Executive Director at KTM Sportcar GmbH and site manager at Graz: “In our 65,000-square-foot space, we set up one of the world’s most modern car production facilities, if not the most modern, in practically no time. For the most part, we work to the standards of large-scale production, and of course we’re also ISO certified. So the requirements that we impose on our products, our vehicles, apply equally to the standards and the level of quality we expect from our production process!” Each of the four currently available KTM X-BOW models is built with the finest handiwork at the Graz facility: KTM X-BOW R, KTM X-BOW RR, KTM X-BOW GT – and, of course, the newest addition to the product line, the KTM X-BOW GT4. “With these models, we cover two completely different segments,” Wölfling explains: “On the one hand, we build true race cars like the KTM X-BOW GT4, which has been enjoying great success throughout international customer racing since 2016, while on the other hand, we also build super sports cars for road use in accordance with EU regulations. And we’ve done it over 1000 times in the past nine years – we’ve now manufactured about 1060 vehicles. With all that work to do, our employees don’t know the meaning of the word ‘bored’.”

Speaking of employees: If you thought it would take vast legions of workers to handle the production of about 100 vehicles, along with worldwide provision of replacement and tuning parts, customer service, quality assurance, marketing, sales, purchasing, and of course manufacturing, you’ll be surprised. In fact, just 26 employees – including upper management – work at the Graz facility, with another eight workers on the development team based in Wels (Upper Austria). But is such a small team really capable of the immense amount of work involved in car production, especially in a specialized niche like lightweight sports cars? Michael Wölfling, who worked in the automotive industry earlier in his career, responds with a smile: “Maybe even more so than a big team. For one thing, we’re like a close-knit family, so that keeps people motivated. And the other thing is that each employee does a lot more than they would at a big company. Everyone ends up with two or three jobs to do – so our work is really diverse and challenging every day!” 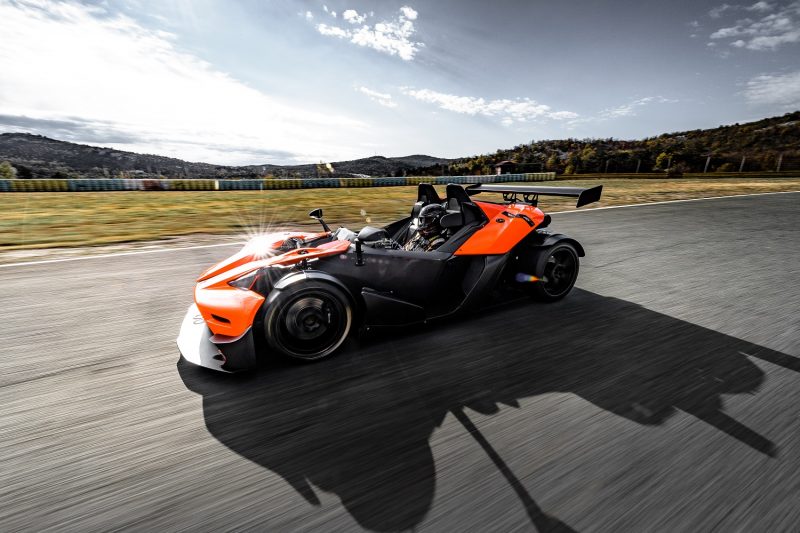 At the production facility itself – consisting of five pre-assembly stations and ten stations on the main assembly line – more than 800 individual parts are assembled for each complete KTM X-BOW that rolls off the line. At the center of it all is the monocoque chassis produced by German supplier Wethje, weighing just 172 pounds and available in three versions (R/RR, GT or GT4). There’s no welding, drilling or painting here; “it’s basically Lego for grown-ups,” says Michael Wölfling, who – like many of his employees – has been part of the team since it was founded in 2008. “We all have a passion for automobiles and a shared enthusiasm for the KTM X-BOW, which is without a doubt the most exceptional and modern super sports car of its time.” 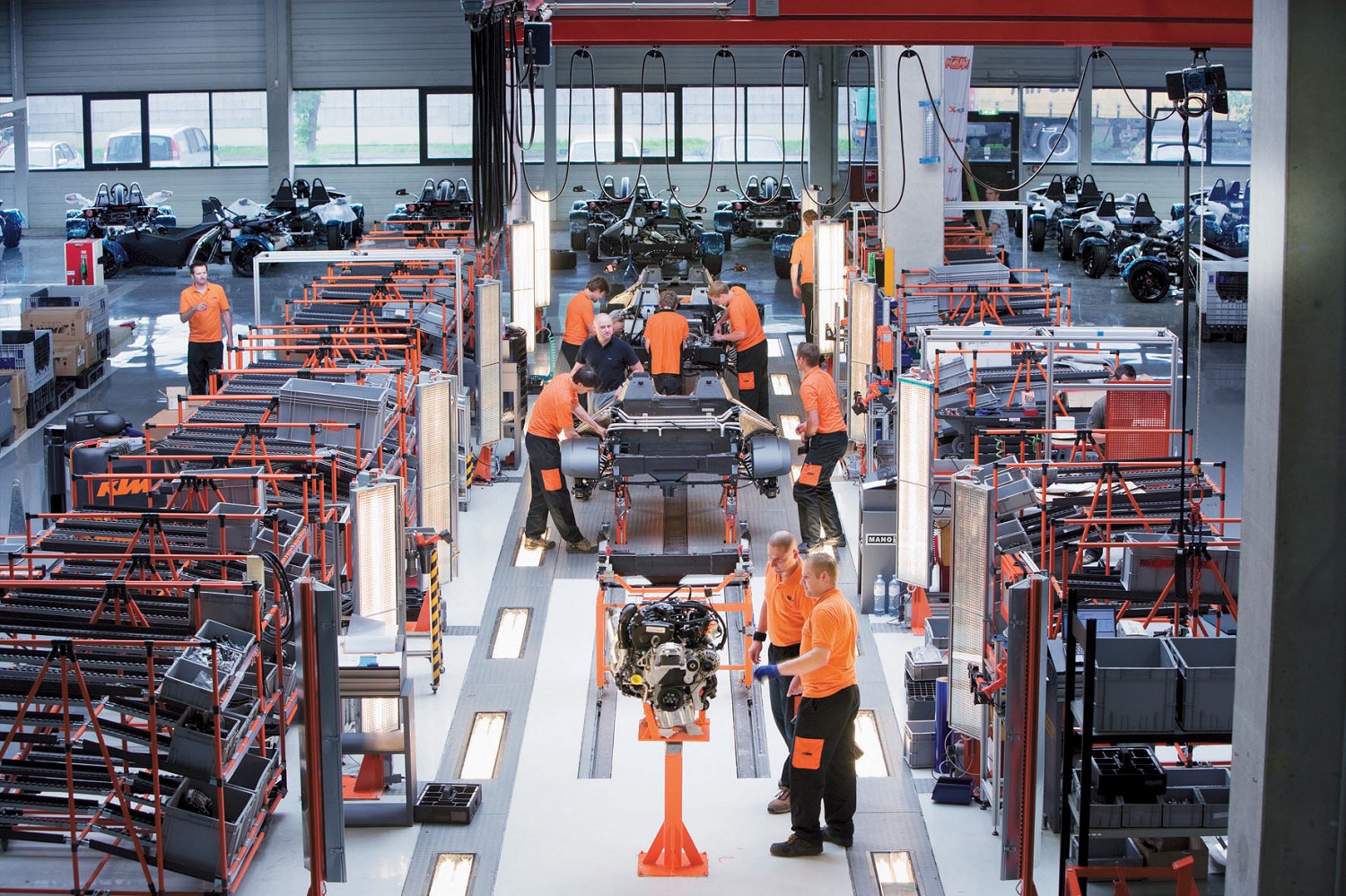 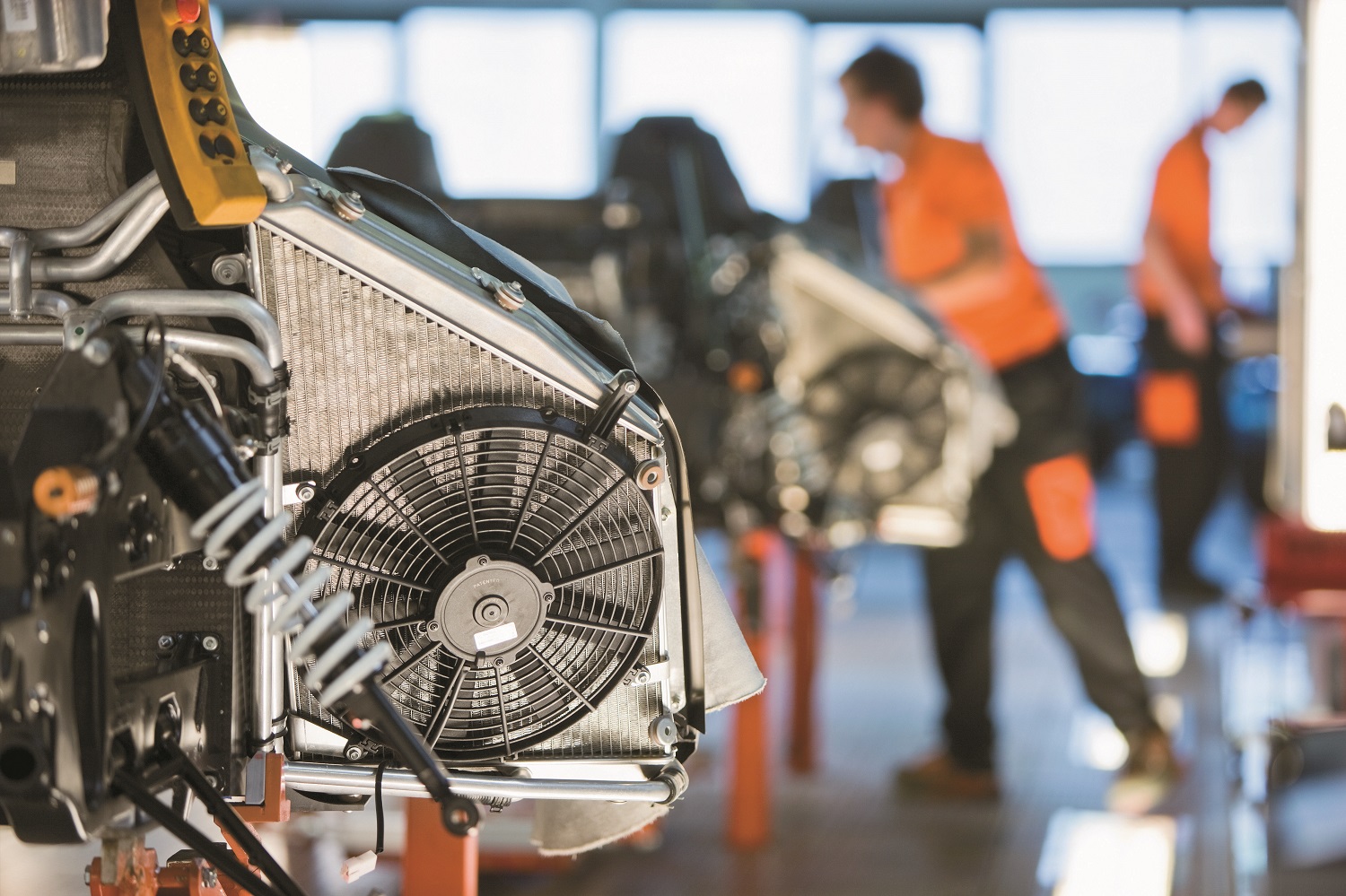 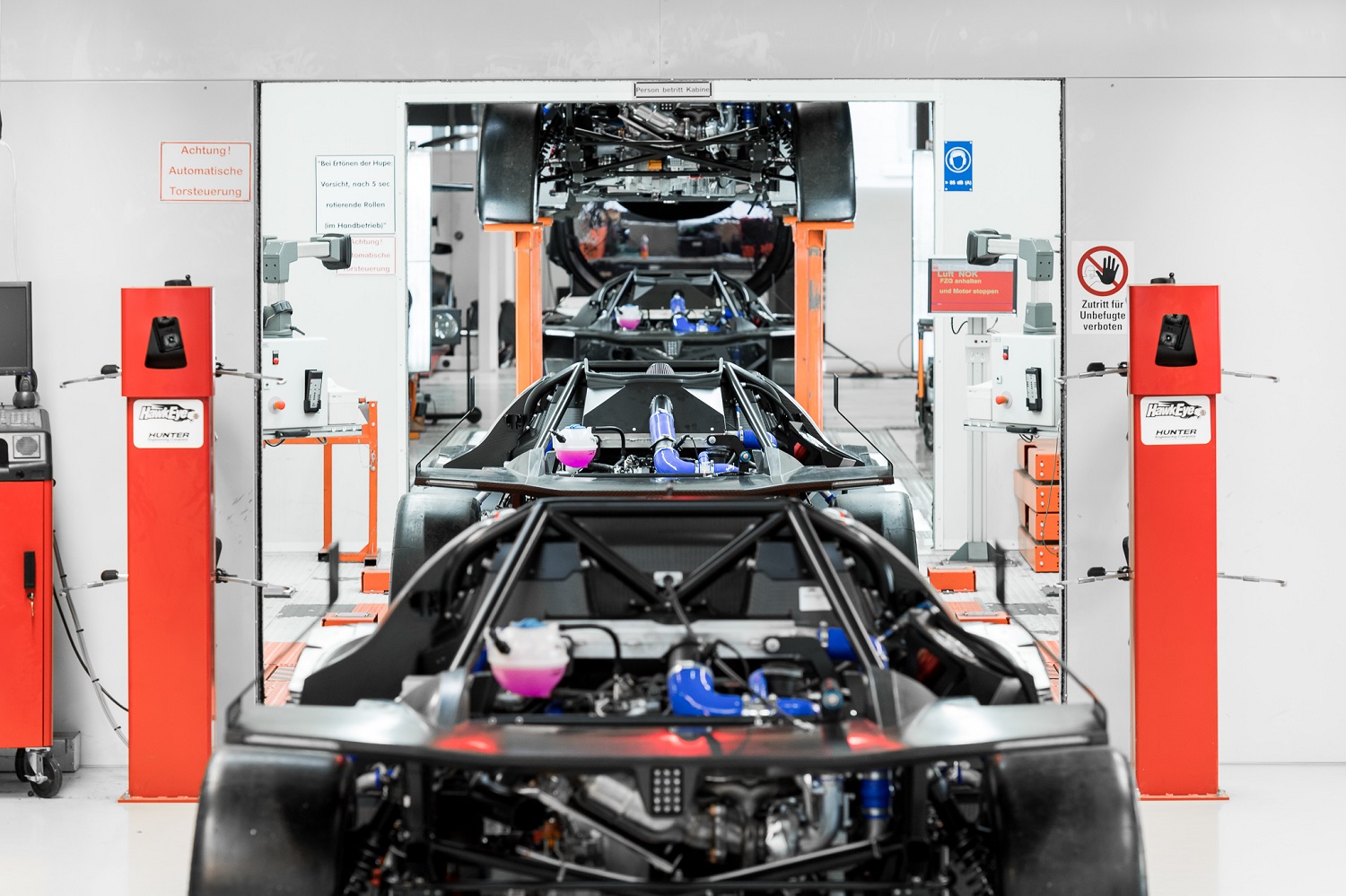 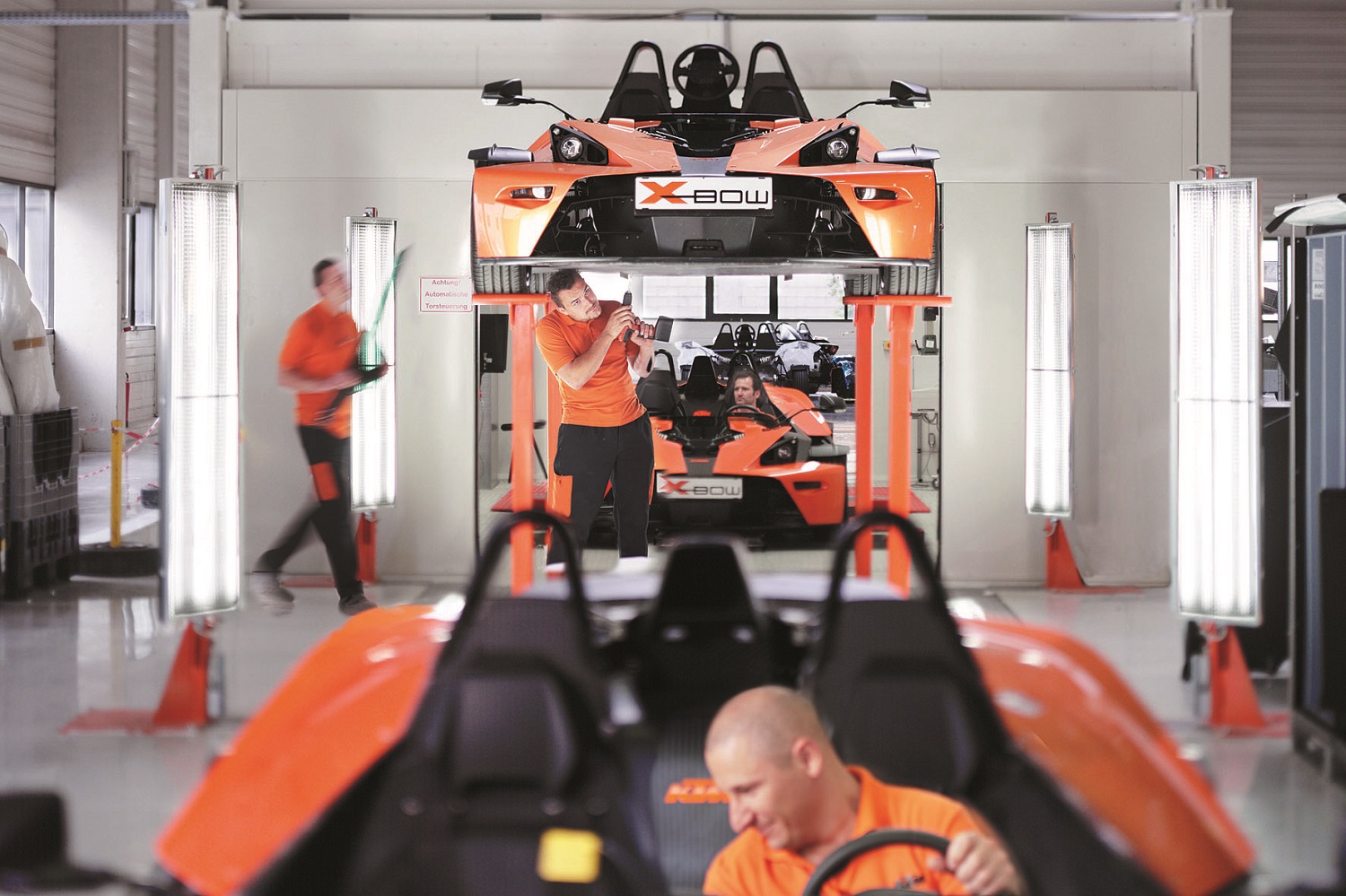 An average of 2.8 vehicles can be manufactured completely to order each week, but of course the exact throughput time also depends on the specific model. Construction of the completely closed and even more impressively high-tech KTM X-BOW GT4 is significantly more complex, while the “simplest” is the basic model, the KTM X-BOW R. What they all have in common is the 2.0-liter four-cylinder turbo engine from our partner Audi, a high-quality and extremely powerful engine that provides top-notch results on the road and the racetrack alike. And speaking of racetracks: “Needless to say, our employees are also there to help with our many racing and track day events, and when we have to take our 20-plus ‘Rookies Challenge’ vehicles to a race in Italy, for example, production back at home comes to an almost complete standstill. I guess you’d say we always have to be READY TO RACE,” concludes Michael Wölfling.

If you want to follow the “True Racing” team’s progress, go to http://www.facebook.com/trueracers or http://true-racing.at/!