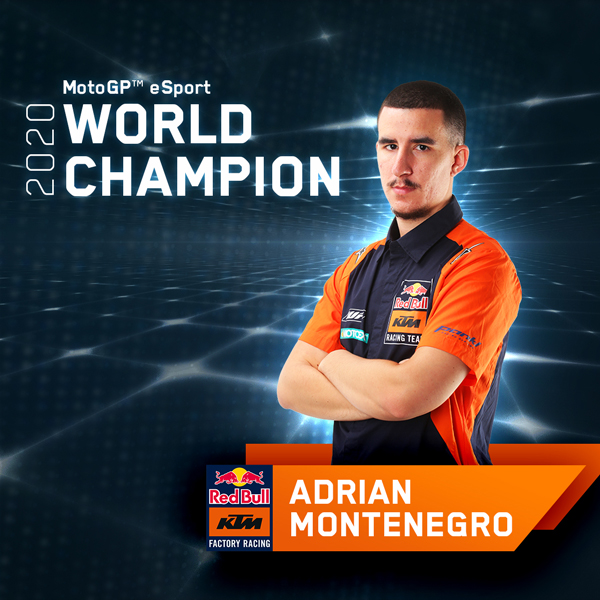 Red Bull KTM classified as 2020 MotoGP eSports World #1 in the capable hands of 23-year old Adrian Montenegro. The Spaniard cleaned-up in the eight rounds of the championship with his ‘virtual’ KTM RC16 so we decided to ask how and why…

Adrian Montenegro has the same official shirt and arguably the same competitive spirit as the 2020 Red Bull KTM MotoGP quartet of Brad Binder, Pol Espargaro, Iker Lecuona and Miguel Oliveira. The Gran Canarian does however have a different set of ‘controls’ when it comes to the saddle of his KTM RC16. Montenegro registered five wins and two more podiums in the burgeoning eSports version of Grand Prix racing after coming through a series of regional challenges and a Pro Draft to make the cut as one of eleven best competitors with the official MotoGP game.

As a member of the Williams eSports team (the F1 squad has gaming representation across a number of motorsports)  and with a MotoGP world ranking of 5th in 2019, Montenegro was selected by Red Bull KTM for 2020 and – happily wearing the number of his favorite racer, KTM test rider Dani Pedrosa – laid waste to the competition.

“There are a few guys who were already signed up by factory teams but I was pleased to be chosen by Red Bull KTM,” he said in a call from his home. “Since I was small, I always liked watching Dani; so, I raced with his number 26 and I also liked his helmet and used his livery. It was cool how it worked out.”

Montenegro’s ability had been spotted by the Williams crew as the world of eSports and competition continues to sprout at a rapid pace and on a wide international scale. In a recent article renowned business magazine Forbes stated that global gaming revenue is set to reach almost 160 billion dollars in 2020 and eSports in particular will top 1 billion, with expectations to rise by another 50% in the next two years. Vast streaming and online viewership is helping to boost numbers while companies and investors are backing elite gaming ‘factions’ to the tune of millions of dollars. Sports like MotoGP and F1 are trying to react to this surging market.

“Williams have a good team in Sim Racing and also Gran Turismo and have now started out in MotoGP,” he claims, as one of a large roster of official drivers/riders/representatives. “They provide me with a computer, headset, controller and everything I need to play.”

Like any focused racer ‘Williams_Adrian’ had to work on his weak points for competition and the eight events in Mugello, Jerez, Red Bull Ring, Sepang, Misano World Circuit, Phillip Island, Silverstone and the Ricardo Tormo Circuit, played out online in 2020. Sadly, the Grand Final couldn’t place at its traditional slot at the ‘real’ Valencia due to the Covid-19 pandemic.

“I improved a lot this year with my starts and that really helped,” he commented on his rise from mid-top 10 runner to race winner and eventually champion with the prize of a brand-new BMW M235i xDrive Gran Coupé to park alongside his KTM RC 390 in his garage. “I was around 7th-6th-5th last year and I found it really difficult to comeback, so I prepared this season to start further forward and it worked.” He won five of the first six races and had two more podiums to head the final standings by 23 points.

“It was still pretty nervy to race from home but of course it would be better to have been at the circuit,” he adds. “It would be amazing to win there with things like the trophy presentations and this year would have been the keys to the car! It’s a little ‘colder’ when you’re at home.”

Montenegro has the reactions and the co-ordination to excel at a game that is played online by hundreds of thousands of fans and a healthy section of the MotoGP grid themselves (as evidenced by the Virtual Grands Prix among the riders during the mid-year pandemic lockdown). Nevertheless, he is not a fanatic and doesn’t spend every waking hour behind the PlayStation. His brother, Williams_Cristian, also competes and has also won prizes in MotoGP eSports.

“We play a few hours a day when it’s competition time but, for example, I’m studying now and the championship is over so I don’t play at all,” he explained. “I cannot sit there connected for hours and hours because it would drive me crazy and I also don’t like overdoing it! If I feel I need to be better at something then I’ll work at it, but I also put the controller down when I get bored or tired of it.”

Montenegro admits that he only plays MotoGP and occasionally FIFA. It means he has intimate knowledge of the game developed by Milestone. The Italian studio has been curating the official MotoGP title since 2007 and have evolved their portrayal of the sport in that period.

“It’s good but it still has a few things to improve,” assesses Montenegro, a rider himself and very familiar with the sporty performance of the KTM RC 390. “The developers are always improving the game, so that’s a positive thing. An improvement? For my taste the braking time into the corners is really short, very deep. You just brake and turn, and it doesn’t feel quite right. A good thing? The graphics and presentations of the circuits and the bikes are fantastic. I would alter the physics of the game, but that’s just my opinion. Other players might really like how it is.”

In March 2021 Montenegro has to go again and classify among the elite of Europe and make the cut to attempt the Global series and defend his crown. MotoGP eSports will reach a fifth edition next year and the reigning champ believes it is going places. In 2019 the six-round competition logged 20 million video views with more than 3 million engagements and was distributed by 15 broadcasters. Those figures can only increase.

“I think there is a lot potential for growth,” he opines. “When I won the championship a couple of weeks ago I received so many messages and I still do every day. You can see how much people like it around the world. I think the series has some strong sponsors, like Red Bull, and a lot of interest. I hope it gets a bit bigger next year…and I can still be there to win it!”

For more information about MotoGP eSports check out the official website here: esports.motogp.com