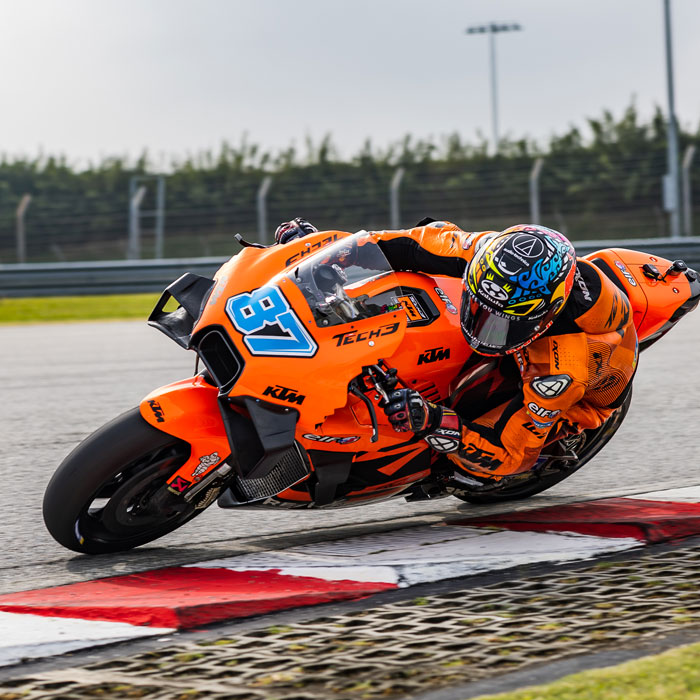 In a high-stakes, fast-paced, big budget, and very visual sport like MotoGP™ racers face constant pressure and scrutiny to perform. We asked 2022 ‘rookie’ and 2021 Moto2 world champion Remy Gardner about the demands of the job.

There wasn’t much time for Tech3 KTM Factory Racing’s Remy Gardner to take a mental and physical ‘breather’ from his day job. The 24-year-old Australian conquered a fierce Moto2™ campaign in 2021 that carried three big distinguishing features. Firstly, the tense battle with Red Bull KTM Ajo teammate Raul Fernandez that went down to the last Grand Prix and saw both riders finish 1-2 at least seven times that season. Secondly, the sheer scale of his speed and consistency that delivered 12 podium finishes from 18 starts (and 5 wins) and thirdly the two broken ribs that he had to deal with at a crucial time during the two final rounds to clinch the crown by 4 points.

Gardner had been 6th best in the world in 2020, so the rise to Moto2 class leader and champion-elect was an invaluable education in dealing with a sustained amount of pressure. He duly became Red Bull KTM Ajo’s first Moto2 #1 and the first intermediate class winner for Australia but then delved straight into the ‘deep end’ as one of two new recruits for the Tech3 MotoGP crew with the fearsome, GP-clinching KTM RC16. To cap a hectic period between Moto2 success and MotoGP ‘baptism’, Gardner also fractured his right wrist in a winter training incident.

There are only 24 spots on the MotoGP grid and latest-spec factory bikes are precious as the gap between victory and the last point for 15th place is closer than ever. 2022 introduces five new rookies to the division and the time needed to shine appears to be shrinking as new talent pushes up from Moto3™ and Moto2 each new season. 15th is where Gardner finished on his debut in Qatar in early March. He is on the path but is well aware that a sport that can be so gratifying can also be so punishing, both in the spiritual and physical sense.

It almost stereotypical fashion, Remy looks like a man who doesn’t need to grapple with the spotlight of MotoGP. A laidback vulnerability hides what is clearly a fiercely determined racer. He exudes the feeling that it would be a mistake to underestimate him…although MotoGP has been a tough world to the hardest characters and the brightest talent.

We grabbed his thoughts on aspects of the job that lead to results, outside of the ability to set-up the bike, open the throttle and pick the right line…

“They all say ‘we don’t have pressure’ but we all do…We have to perform but you have to be confident in yourself that you can do it. We need to be smart as well and not be too fast, too quick because we have seen many rookies hurt themselves with these ‘big’ MotoGP bikes and I can tell you that a crash on one of these is scary. For sure there is no pressure at the very first race but I’m sure it will ramp-up during the year. At the same time you get more comfortable as you make more laps and get to know the bike more. Steps of confidence.”

“Last year in Moto2 there were many times where I went into races quite confident…even though Raul had qualified in front of me I felt better because I’d seen his data and I knew his strong points and whether his tyre was going to drop or not. I had it mapped out. In the end, it was a positive thing to have him so close to me. He kept me on my toes and on top of the game. In one way you can think that it would have been easier if he wasn’t there but I’m also sure that I wouldn’t have won as many races or had as many podiums if he wasn’t next to me and keeping the pressure on.”

“The moment you relax and think ‘this is coming quite easy’ is the moment when you are out of the Moto2 podium… It meant you had to keep focussed, keep a level-head and perform every time out on the bike. That’s what kept us in the top three so often and I think it was the same for Raul. The days when he was half a second quicker than me was when I thought ‘pull your finger out, he’s kicking your arse’. There was never an easy day.”

“The first time I walked into the Tech3 pitbox there were six guys standing around listening to what I had to say…I thought ‘I must be important!’ There are a lot of people and resources behind what we are doing but I think most riders are capable of putting that side, out of our heads and focus on what we need to do. If you cannot do that then I don’t think you’ll be very fast because you’ll be going around wondering what you have to do and what you have to say. It’s pretty ‘normal’ to accept this situation because we’ve been racing most of our lives. These days there is a lot of technology, a lot of technicians and everybody has their little role. If you manage to keep it under control and can manage it well then this is also key to going fast, especially in this class.”

“Overall, it’s a big step-up being in MotoGP: media, events, videos, demands… I feel that you have to be a bit more of an Influencer than a rider these days! You need to be on top of your Instagram and all that, and I’m not such a big fan but it’s part of the job and if you start to get frustrated with it then you’re not making your situation better. Everyone wants a piece of me now. Of course, you have the right to refuse things but I chose to enjoy what I’m asked to do. Enjoy the ride. I think it’s nice that people are interested in you! I know I won’t be doing this all of my life so you just have to live in the moment.”

“I was thinking about MotoGP quite early in 2021…I saw there were good results coming from the KTM guys and that really inspired confidence coming into this year. The bike is capable of getting podiums. Just look at Brad in Qatar with a race time that was another ten seconds faster. The level is higher than ever in MotoGP and if you look down the list there is a stupid amount of former world champions and race winners. For sure I am not where I want to be at the moment but If I can adapt my style a bit more to the bike and learn how to ride it and understand the tyres and electronics then I think we can get there.”

“When there is another KTM near the front then, for me, that was definitely a case of thinking and analysing: ‘How is he doing that?’ ‘What do we need to do?’ ‘How do we copy?’. The nice thing is that we all have access to the data and the information. But I wouldn’t say I think about it for too long. I think you would go crazy otherwise. If things are going well then even less. I just get out of the circuit and get on with life. Thinking too much and pondering on things can drive you insane. It’s easy to get confused in this world.”

“Building cars [a garage project] is like my escape, let’s say. I didn’t have this big plan when I started, I just wanted to tinker with cars and I love lots of horsepower. Maybe it was also the will to learn something else as well for the future. I built-up my workshop and now when I go in there it’s just the music, me and a locked door. I put the phone on silent, get away from it all and think about something else.”