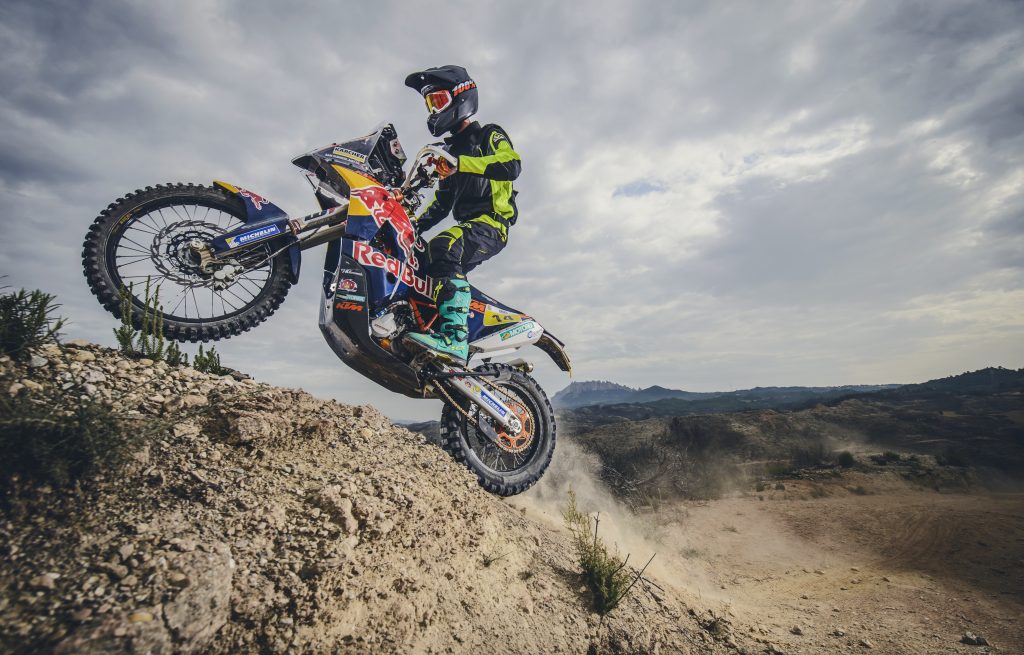 A small industrial unit in the back streets of Igualada, Spain, about an hour west of Barcelona near the Montserrat mountain range. It’s an anonymous-looking location housing some of the most extraordinary motorcycles on this earth. Inside, the KTM 450 RALLYs are sitting up on benches, still scuffed from Red Bull KTM Rally Factory Racing riders Toby Price, Sam Sunderland, Matthias Walkner and Laia Sanz testing the previous day.

Designed solely with the purpose of winning the world’s toughest motorcycle race, the Dakar Rally, the 450 RALLY is as impressive a motorcycle as you will see. Compare them to Motocross or Enduro factory machines, stand them bar-end to bar-end with a MotoGP bike and the Rally bike easily hold its own. 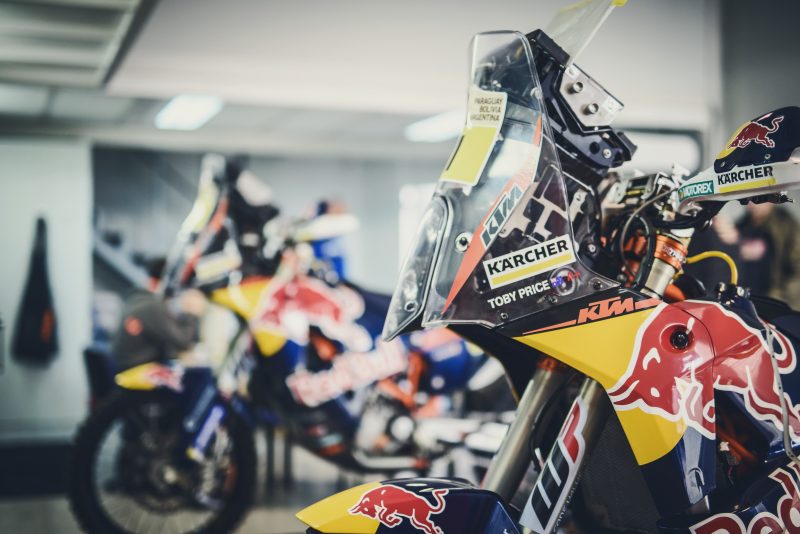 Like few other manufacturers entering the Dakar, KTM’s 450 RALLY is a thoroughbred. From drawing board up it is tailor-made for the purpose of winning Dakar. Like no other race machine it has to be capable of conquering every kind of terrain. Arguably that means the 450 RALLY can hold its head higher than a MotoGP or MXGP bike because of its unbelievable skill set. So much more is required than just buzzing round a track, railing berms or hopping over logs. A Rally bike must do it all and be as hard as nails too.

By design, KTM created a mechanically simple and robust machine because the Dakar dishes out such a tough test. If a bike can’t cope with punishment it’s no use to the factory, team or rider. At any pace of rider the Dakar is an immense test of a motorcycle, an unbelievably tough test mechanically at race winning speeds. For the 2017 Dakar that test was 8188 kilometers in total, over 4000 kms of which were raced special stages. Rule changes in recent years means engine have to be fast but they have to go the distance reliably too or they won’t make that 12th stage finish line in Buenos Aires. These are statistics no MX or MotoGP machine can match. 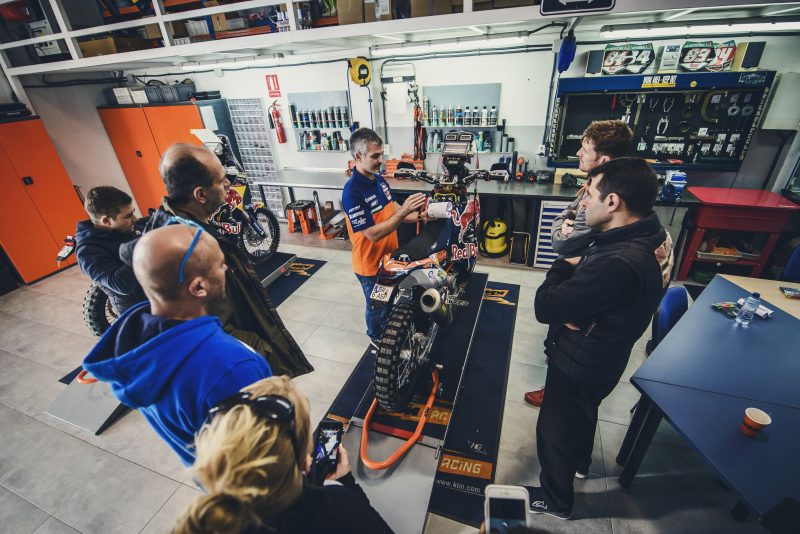 The chassis hasn’t changed much on KTM´s 450 RALLY since conception in 2014. Though WP have made huge leaps and bounds in recent years it’s also true to say the 52mm Cone Valve forks and Trax suspension are not a million miles away from the parts you could fit to your bike. Sure, suspension is dialed in to individual riders’ needs and beefed-up to cope with the extra weight of the Rally bikes but there’s nothing too ‘factory special’ about this WP kit. Dakar terrain varies massively from hard pack, rocky desert to flour-like soft sand, so easy changes are increasingly important not just to make the life of enduro riders easier, but to make the job of winning races easier – put like this it is easy to see how racing feeds production bike development.

In a sport where the margins between riders are becoming seconds and not minutes being able to manually change the suspension via clicker adjusters is growing in importance. On the move or at fuel stops riders can adjust the character of the bike as the fuel gets used up (weight bias changes dramatically as the 33 liters of fuel burns over 250 kms or so). Although it is awesome in so many ways, when you actually get to sit on a KTM 450 RALLY factory bike it feels pretty normal. The fuel to make the distance and navigation equipment to find the way are a huge part of Rally and therefore a huge part of a Rally bike. Beyond the big fuel tanks and navigation tower however, the bike is not so unfamiliar as a dirt bike, at least not as much as you expect.

Stability is a key part of the 450 RALLY´s offroad ability. It’s a beast and obviously needs to go very fast, but it behaves itself too, encouraging rather than frightening the life out of you. As Antoine Meo puts it, “the first sensation in the beginning is strange, but quickly you’ll get a good feeling with the bike. She’s an animal, but she gives you a lot of confidence. She’s very stable, heavy yes, but when you’re close to the limit she’s super aggressive!” 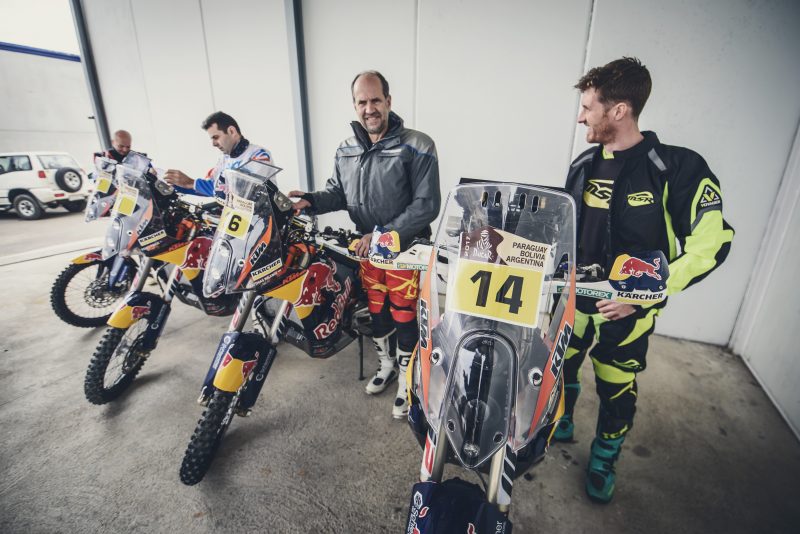 Our test was mostly ridden on dry, dusty and rocky tracks – typical Spanish tracks you might say. Despite being given a full-factory and incredibly valuable machine to ride, the nerves you might expect to find were washed away quickly. Truly this is a bike that rewards confidence with surprising agility and delivers a fun-factor you don’t expect. Check out some of the official pre-Dakar press images of Toby Price laying down some full-on MX moves on his bike and you can easily see what we mean.

To cope with the unreal speeds and the enormous weight of the full fuel tanks the 450 RALLY is also very stable. The steel trellis frame is closer to KTM ADVENTURE bikes than the back-bone type on KTM Enduro and MX bikes, making it stronger and more stable naturally at speed.

That’s not to say it isn’t agile. Our testing route took us along many lanes learning the skills of navigation with roadbooks – no easy task it turns out. But if nothing else the navigation training (reading errors!) gave the journalists chance to practice their U-turn skills. Again, rather than be awkward or difficult to whip round in a tight space, the KTM 450 RALLY factory bike is eager you treat it just like any other dirt bike; stick a foot down, spin her round and crack on. It’s almost like it is pre-programed to not waste time. 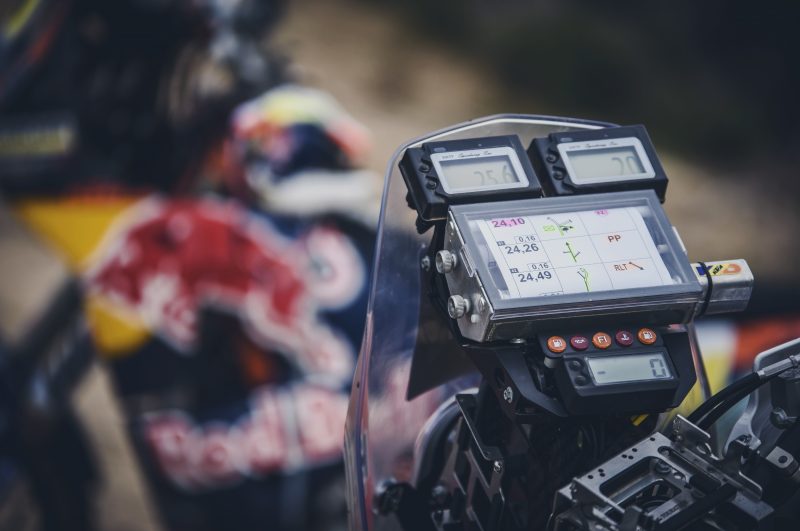 Factory race bikes are often difficult for normal humans like us to ride. Tony Cairoli’s KTM Motocross factory machine, for example is just that, awkward to ride because it is set up in such a specific way that only the very best in the world can live with. Of course, it is perfect if you are Tony and you want to win MXGP motos but for a mere mortal it feels too much. You can’t say the same of the Rally factory machines. Honestly it was a surprise how good they feel from the off. Before I’d left the Rally team’s yard I’d grabbed a cheeky step jump off a footpath down the side of the industrial unit. It felt eager straight away, like the 450 RALLY was saying, “come on, let’s go man!” After we hit the dirt and it was quickly clear this bike is way more user-friendly than you’d imagine.

The precision of controls helps constantly too. From the Brembo brake system pumping 300mm MotoMaster front brakes (240mm at the rear) to the throttle drawing on 42mm Keihin carbs, everything is pin-sharp and packed with feel. Good feel is exactly what you need when you’re doing 150 kmh across a rocky desert of course. Consistency, precision and feel are also just as important when you’re picking your way down a rutted ravine or ducking your way through an overgrown riverbed too.

See a run of rolling jumps, climbing ahead of you up a lazy hill climb? Wind her up and knock it through the gears and go for it, she’s ready. Turn the corner and find you’re heading up a narrow and rocky gully? Again, no problem, knock it down to first and pick your way through. Tall gearing? What tall gearing? Despite that and the long wheelbase, it still takes on a trials-like gully with relative ease. 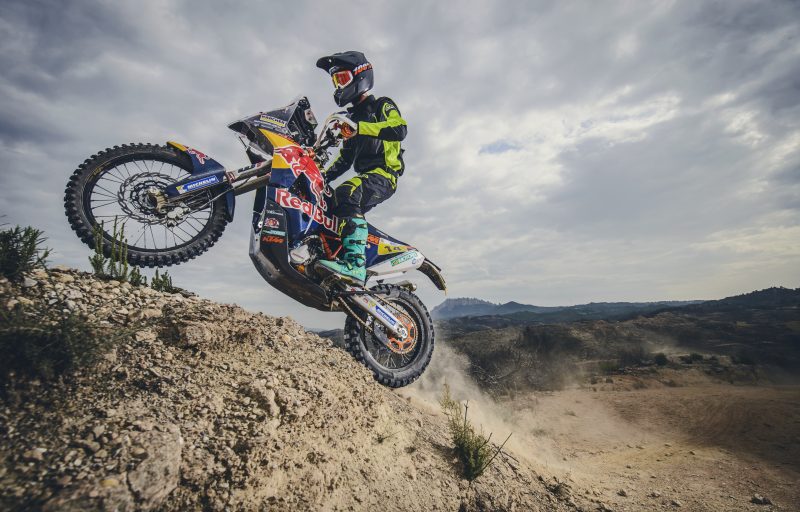 That’s not to say it is like riding a FREERIDE. It remains a big bike by most standards and that means you’ve got to be confident to get over any barriers of size, weight or of course power. The quicker you get over that barrier though and push a bit harder, the quicker and easier it is to get a taste of just how awesome these bikes can be in the right hands.

The hand-made Akrapovič titanium exhaust system is a work of art. By comparison to other offroad exhausts it is a whopper, big enough to fit your arm inside it seems. The extra power (and noise) coming from this 449.3cc, 4v SOHC KTM engine is stark contrast to most other 450s you’ll ride. Almost 70hp and 52.5Nm are high numbers, peak power is high up the range too, around 7500rpm. That translates to a progressive delivery with no great steps of power, to put it simply that means the more you twist the more it goes and it keeps pulling strongly through all six gears. When you’re knocking between third and fifth gears, braking, sliding and power-sliding out of turns on a trail it is tractable power as well as an addictive pleasure.

The biggest positive from the rider’s point of view is the standing riding position. Natural as a walk in the park the position and bend of the Neken bars on the various bikes, plus the super-wide Raptor footpegs, make a standing riding position so good you feel, in principle at least, you too could ride for six or seven hours too just like the pros. 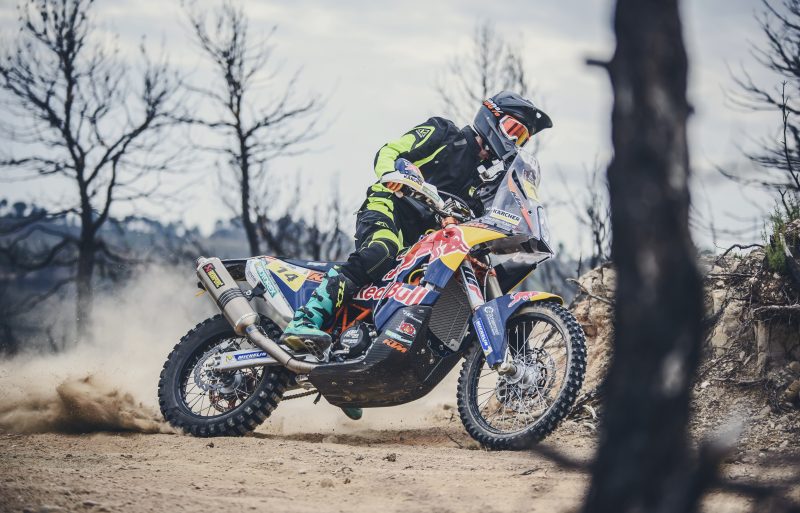 In the sport of Rally, at the Dakar especially, that kind of accommodation is incredibly important in terms of rider fatigue. The longest stage in the 2017 Dakar was 977 kilometers, the day before that 892 km, of which just (just!) 492 km were special test. It is no use to anyone having a difficult bike to ride when riders are being put through those distances.

KTM’s continued commitment to Rally is surely what other teams and manufacturers measure themselves against. To repeatedly come up with the goods and win the Dakar for the last 15 years speaks volumes about the Austrian factory’s commitment and dedication to the cause. Step away from a few, tantalizing and brilliant hours riding a KTM 450 RALLY factory bike and you can’t help but want more. It’s big and we’re collectively glad (if not a little intrigued) not to have been riding the bikes full of fuel. But it is also a lot less daunting to ride than you’d expect. 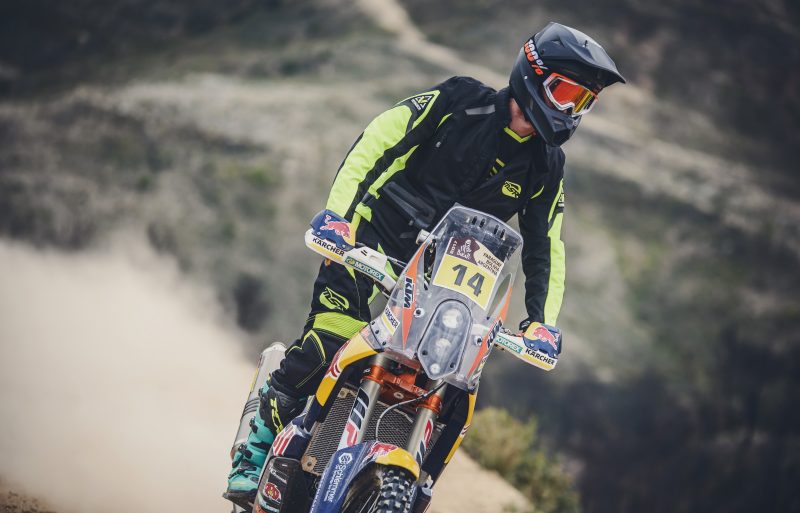