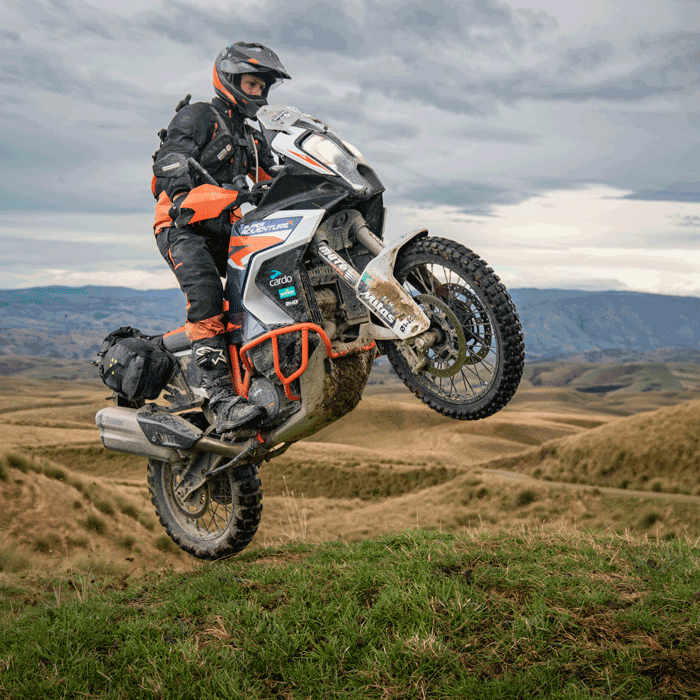 RIDING THE LAND OF KINGS

KTM ADVENTURE Ride Outs were revived in New Zealand with renowned rider Chris Birch at the helm. Here’s why the longest trip could be one of the very best…

Planet earth is a playground for the senses but perhaps none tickle the curiosity and the soul more than the diverse landscapes found in New Zealand. The spread of climate, terrain and experiences on the two islands are tailormade for the attributes of the KTM ADVENTURE range, especially the KTM 890 and 1290 SUPER ADVENTURE model line-up. A magical country begs to be explored on motorcycles that can be feathered or pushed hard, can cover vast kilometres but are also agile enough to wind up a technical trail and are dependable even in the remotest of spots.

After two barren years forced by the limitations of the pandemic, KTM Adventure rider and Enduro legend Chris Birch was able to recently fire-up a KTM ADVENTURE Ride Out in his native land. It was a three-day blast of fresh air for the bikes, the riders and the feeling of possibility. “We had the whole route organised, but Covid rules meant we had to postpone it… but once the rules had changed again and we were able to cap it at a certain number then we were back-on,” Birch says on the phone from Canada where he has been busy on another Adventure rally. “We allotted forty places for riders – plus staff – so we were below the official permitted figure. We were then good to go.”

Birch has been a KTM Adventure rider for fifteen years and a hard Enduro specialist in orange for even longer. He is a key figure in the organization of KTM tours and rides in one of the most spectacular locations. “It was a proper ride,” he describes. “We started from Dunedin [on the southeast coast of the southern island] which meant that a lot of guys already had quite a trek to reach the launch point. It was 1,500 km and quite a lot of that offroad just to begin with! It is one of the really good things about these Adventure events; they end up being the excuse and the reason for an even greater adventure. A lot of the guys came down from the north island, so they had three-four days minimum on the bike just to arrive to the start of the Ride Out. We had three days of full-on riding and then they had to go home again! A three-day event was really a two-week trip for us, which was great!”

The Ride Out photographs show the mixture of what the group encountered. “The best thing with these KTM ADVENTURE bikes is that you can travel and cover so much ground,” Birch says. “We had three quite different days of riding. New Zealand’s topography changes pretty quickly. So, we started in Dunedin which is more pine forests and rolling grass farm country and then headed more central which is higher, alpine stuff with a much drier and arid climate. We intentionally tried to give the riders a real change over the days, and it’s great to have that variety and the feeling that you are heading somewhere.”

Birch might be biased but he still believes the spell of New Zealand is one of the very strongest for those that like to see the unseen with the help of two wheels. “I’ve ridden motorcycles in 50 countries now and I still arrive to places in New Zealand, a ridge or something, where I’ll stop, look around and think ‘this is still a pretty damn good place to ride a motorbike’,” he says, evidently smiling down the call. “The cool thing with the range we have on these bikes is that you can get to some really remote places and on that last trip we went to many that I haven’t visited before, which is pretty cool after a lifetime of riding and exploring there.”

A Kiwi Ride Out looks fun and unique but it also looks demanding. As much as it is a special experience, Birch insists that it is not only for hardened Adventurers or enduro riders. “I mean, you need to have enough know-how that you can ride a motorbike offroad for three days. It’s not for beginners…but it is not a big macho thing; everyone helps each other and if you stop on the trail and have a problem then everybody will be stopping to see if you are okay. It’s a real community sort of thing and nobody gets left behind. It’s about bringing like-minded people together, there is no racing and no rush. It’s just about getting to cool places together and enjoying the bikes.”

Birch’s important and international role with KTM (he is based with his family in Europe for four months this summer while he embarks on a series of other events) means he gets the luxury of ‘exploring’ the ADVENTURE line-up; a selection of bikes he actually helped to develop. “I swap around between the KTM 890 ADVENTURE R and the 1290,” he says. “I really like the 1290 for the South Island because the riding is generally more open and flowing; more 2nd and 3rd gear than 1st and 2nd like it is in the North. I kinda joke that I am super-spoilt because the 890 is my North Island bike and the 1290 is my south bike!”

North, South, KTM 890 ADVENTURE R or KTM 1290 SUPER ADVENTURE R; the appeal of New Zealand makes the chance to join Birch in one of the authentic ‘corners’ of the globe seem more enticing than ever.

Check out how Chris prepared the KTM 1290 SUPER ADVENTURE R for this epic trip here.