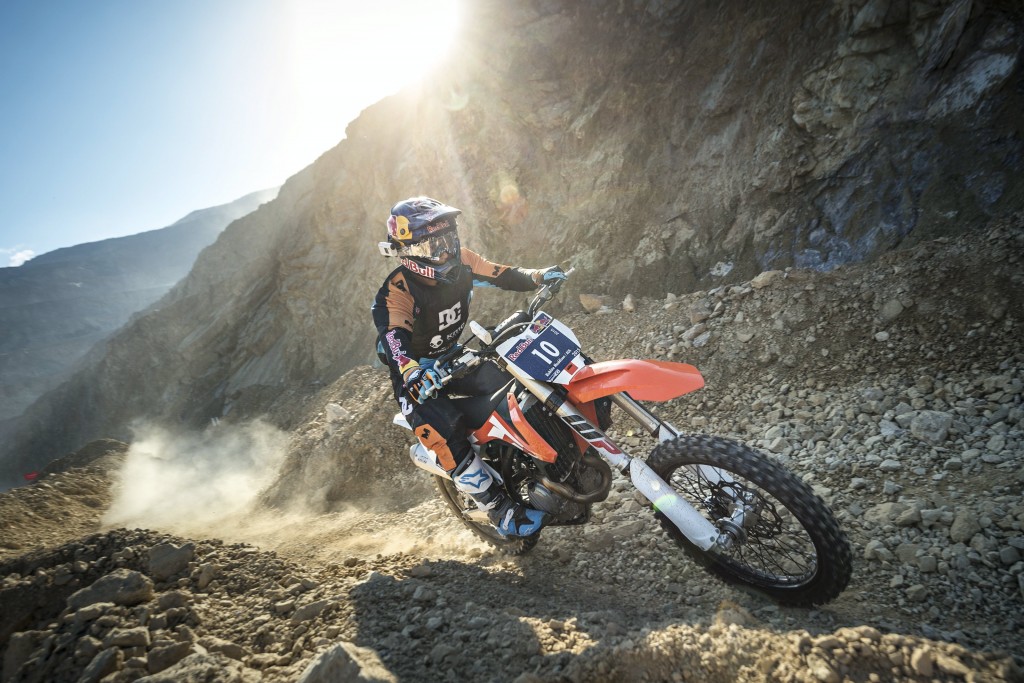 Robbie Maddison, perhaps best known as a Guinness world record holder, jumping off Arc de Triomphe in front of the Paris Las Vegas Hotel in Las Vegas, Tower Bridge in London, being a James Bond double and all round Freestyle legend, visited the Erzbergrodeo for the first time at the weekend as part of the “On Any Sunday – The Next Chapter” launch.

The KTM BLOG caught up with him to capture his thoughts of a crazy race that saw four winners declared at the end of the high-drama Red Bull Hare Scramble.

“It’s the first time I’ve been to Erzberg. The landscapes are breathtaking and talking about the whole event, now that I’ve seen the end of it, well I’m still lost for words. It’s such a heartwarming story to see those boys pull together and watch them get through it. I’ve done some trial riding and I know how much sometimes you need help; you want a big strong friend to help you, and to see those guys to get through by themselves and help each other was really cool.”

A new section in the ultra-tough event, where riders battle some of the toughest terrain imaginable and this year in the intense Austrian heat, called ‘Downtown’ saw riders helping each other to make it to the end of the race. With no outside assistance allowed, it was a true show of sportsmanship. Early in the weekend Maddo, who raced the prologue, had declared he would love to take part, but we wondered if he knew how tough it really is.

“I thought halfway through the day ‘Do I really want to do this next year?’ when those guys were stuck in the woods for an hour or more, I mean if they’re stuck I’ve got a lot of work to do, but it’s an amazing event and it’s motivated me even more now to want to do some more Exteme Enduro, improve my fitness and it’s a big motivator – exactly what I needed,” continued the Aussie. 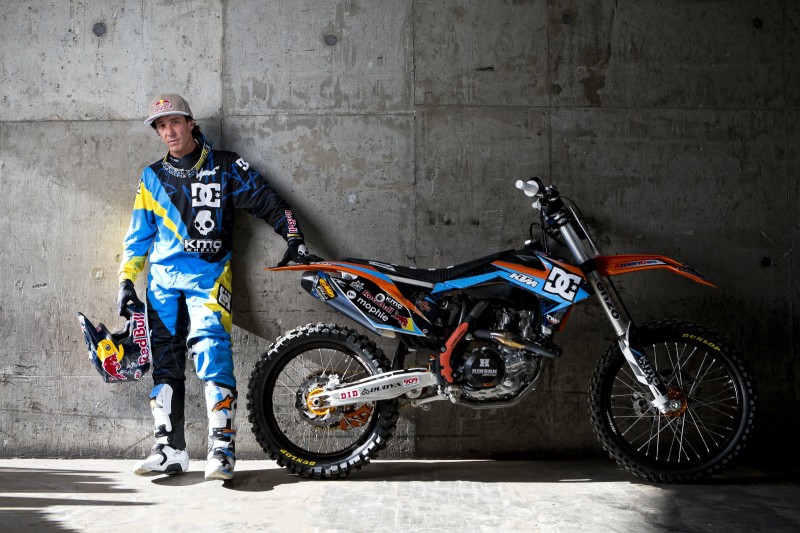 As a video stunt-ace, which saw him jump off a huge ski jump aboard a KTM motorcycle recently, Maddison’s direction can certainly be in multiple ways. Erzberg would be the ultimate test of strength, grit, fitness and skill for the Aussie, who got a taster this year during the prologue. Maddison raced with no training, no preparation with a bike provided by KTM headquarters, and was in an impressive 52nd place after two days out of 1800 riders.

“For me honing my skills on everything is really what my goal is. For the video stuff we’re planning I need to be good at all types of disciplines. One area I’m lacking is in the trials area, so doing that could definitely help me, and once I’m getting that technique of riding and some fitness I should be able to get through something like this. I’d love to do an Erzberg and finish it; doing a Hard Enduro would be great. Once I’ve got the fitness I think I can do it, maybe not with the top guys, but who knows – I always aim high.”

“I didn’t make the second prologue run, but I was 45th after the first day. I didn’t know what to expect, but I kind of went out there not really familiar with the terrain. The knowledge of riding in the stones wasn’t there and I came into a corner without my defense mechanisms on, and a big stone took out the front wheel. I went down and along with two stalls it cost me around 20 seconds. I think without that I would have been top 20. I was happy with that. I haven’t been riding much at all, I’ve just been doing this latest project, and I’ve been waiting on knee surgery. I’m really excited to get the surgery done, my fitness back and I want to be the fittest I’ve been in my life. I was really fit when I was younger and I’m looking forward to getting that back.” KTM gave Maddison a KTM 450 SX-F to ride, as it’s fast, and ideal for the short prologue run up the iron giant, knowing the Australian rider wouldn’t be going on to do the Hare Scramble. Robbie explained it would be tough to do any other parts of the race on it, and the sheer power of the 450 made it a challenge to ride, but he had a lot of fun.

“I wasn’t sure which bike to ride. My main reason to come to Erzberg was for the On Any Sunday – The Next Chapter premiere, and while I was here I thought I’d ride the prologue, so I rode the 450 SX-F. It’s probably a bit too much bike for Erzberg, as there’s so much momentum you can get on the straights; I was getting to 70mph, and in the slippery, rocky corners the 4-stroke has a lot of momentum behind it. I think a 2-stroke would be easier to slow down – all the top guys are using 300 EXC’s and I was watching them come up Dynamite and check point 20 pivoting them on the back wheel. You’d have to be pretty impressive to do that with a 450 and for four hours of riding. But we knew I was just riding the prologue and I had fun with the 450.”

“I think at Erzberg the conditions can be totally different each time. A couple of years back it was covered in snow and it’s a treacherous place. I loved riding this weekend, I had a great time on the 450 and was at peace with it, but I wouldn’t want to have to carry it anywhere.” 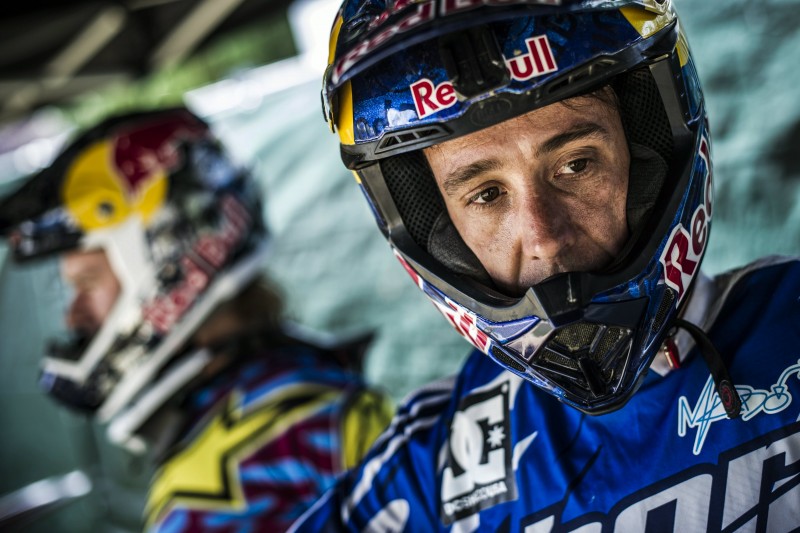 For the future Robbie has a lot of plans with Red Bull and hopes to be working more closely with KTM. The former Freestyle ace has set the bar high with his impressive stunts and records, while also planning to test his own strength and endurance at the likes of Erzberg.

“Where I have most of my eggs in the basket is pushing to do more video with Red Bull in the future. We’ve put a storyboard and treatment together, which I think is a great concept and a great story. We’ll have some extreme features on the dirt bike, I’m excited to do that, hopefully we can get it approved. I have a couple of dreams I want to do. First and foremost I have a film to do in Japan, which I hope to do on the FREERIDE E. I’m really excited about it because it’s going to open up my mind, and allow for some different possibilities. When I’ve ridden the FREERIDE E in the past it has a different feel, even though it looks pretty similar to a regular dirt bike. I’m excited to see what it allows me to do.”

After spending a weekend behind the scenes with KTM, Robbie is a huge Hard Enduro fan and we should watch this space for the future to see whether he follows his goals to race Erzberg in 2016.

“It’s awesome to come to Austria and to be part of the orange team is great. Obviously it’s the home of KTM and it’s such an amazing event here. KTM is such a big supporter and an amazing team, I actually felt like a fan being around these guys. I’ve known of them but never met them, so it was great to see such an amazing production at such an awesome event. I didn’t know what to expect when I came here, but I couldn’t have had a better weekend. I’ve had such a great time and it’s been good to catch up with some familiar faces in KTM; I’m just stoked to be part of it.”