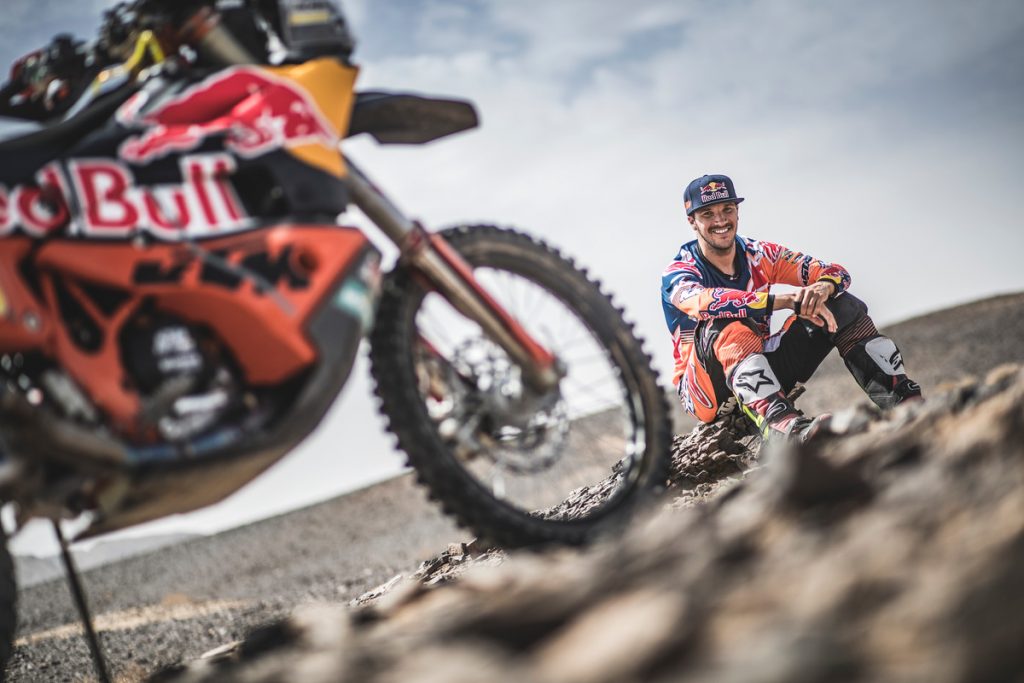 Winner of the 2017 Rally Dakar, Sam Sunderland has had a mixed season in this year’s FIM Cross-Country Rallies World Championship. A title contender right up to the final round in Morocco, Sunderland endured a series of minor injuries and bad luck that eventually ruled him out of the running. Despite this, his pace throughout the year has been hugely impressive, with wins at the opening two rounds in Abu Dhabi and Qatar. Sam heads into the 2018 Dakar as the man to beat. 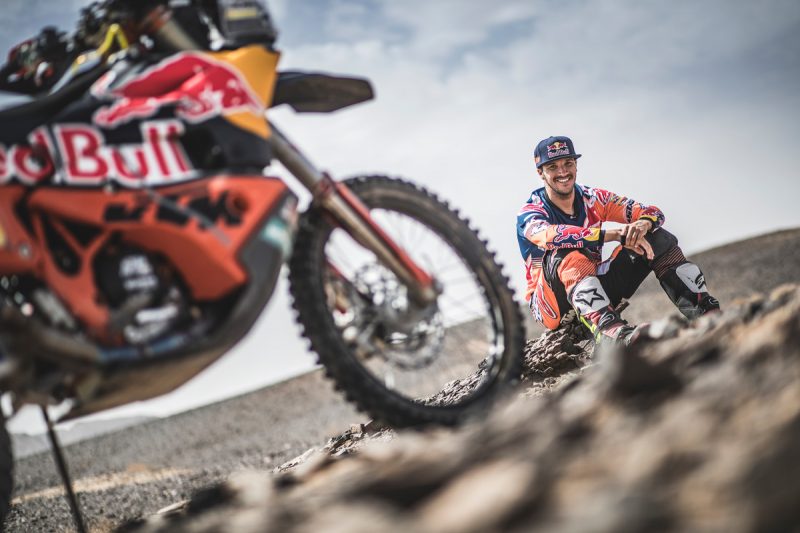 Sam, you’re the reigning Dakar champion, how will your approach to this year’s event be different to last year´s?
“Going into this Dakar is a lot different than last year. This year I’ve got the number one plate on my bike and last year I had never even managed to get a finish in the race. There is definitely some added pressure, but for me I’m going to approach it the same way as I normally do – take each day as it comes and try to stay safe, especially on the first week leading up to the rest day.”

Who are your main competitors?
“That’s such a difficult question. There is so much talent at the Dakar now, gone are the days when it was one or two guys who were fighting for the win. Having won a Dakar now I can relax a little I suppose, but I still know how hard I have to work to be competitive. At the start of the race there are so many talented guys who will be fighting for the win – multiple world champions from beach racing to enduro, to motocross. There are at least 10 guys with the capability of winning. Obviously, my teammates are going to be right up there – Toby Price is a previous Dakar winner, Antoine Meo – multiple world champion, Matthias Walkner ex MX3 and rally world champion. The Honda guys are fast and then you have to look at Pablo Quintanilla – world champion again this year but he’s never won a Dakar, he’s on form and hungrier than ever to take the win.”

How do you prepare yourself for the Dakar? Do you start to feel the pressure build as the event gets closer?
“On the run up to the Dakar you are under a lot of pressure, there are a lot of commitments with training, testing, media appointments. It can be hard to stay focused on the actual training and making the most of your time. This year the first week in Peru crosses the big dunes and should suit me really well, but I still like to get out training in the Dubai sand to stay sharp. Other than that, I like to go cycling, to work on my fitness and stamina, and I’ll do a little altitude training to prepare myself as best I can for that part of the rally in Bolivia. I try to get out on the motocross bike as often as possible, it’s good to train on the rally bike, but the motocross bike is slightly different and I really enjoy it. I figured if I am going to be riding rally for 10 years of my life, I have to try and enjoy it and getting out on the motocrosser is something I enjoy more than anything. It’s beneficial to my riding, but it’s also my passion. There is no better feeling than getting out into the dunes and sending it! Obviously, there won’t be any of that on the run up to the Dakar, it’s just way too risky, but when I have time there’s not much that I love more.” 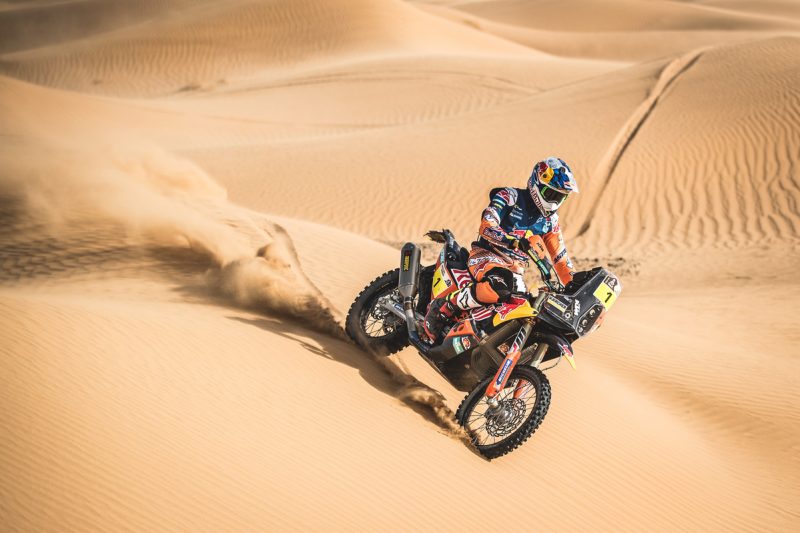 Talking about bikes, how are you getting on with the new KTM 450 RALLY?
“I’m loving the new bike. We were lucky to be able to put a lot of time on it in testing and then we had the race in Morocco. The guys did really well and the bike seems to be a massive improvement in terms of performance and handling. I’m really excited. It’s been such a huge amount of work and commitment for KTM. Even for the bosses to give the go-ahead for a project like this shows the faith they have in the team. I think that’s one of the reasons why KTM has won 16 years in a row now, they don’t just sit back and take things for granted, they are always pushing on with development and finding new ways to push performance on to the next level. A lot of hours have gone into the bike, not only by the team and riders, but by the designers, the engineers, everyone back in Austria and I’m really looking forward to taking it to the Dakar. Hopefully we will be able to reward all that hard work with a good result.”

The team is certainly strong this year, but be honest, do you get along with everyone? Surely it can’t always be easy travelling and socializing with guys and girls you’re trying to beat!
“I can get along with anybody, but within the team, the atmosphere is really good. There is such a deep amount of quality this year. We’ve got Toby Price who is a huge talent in offroad riding and a previous Dakar winner, Antoine Meo who is a five-time Enduro World Champion, Matthias Walkner, MX3 and rally world champion. Then there’s Luciano Benavides who is a new guy to the team, he’s young and has a lot to learn, but he’s still fast and full of motivation. Finally, there is Laia Sanz who is simply amazing, she really blows my mind. At the end of some of the long days when I’m feeling exhausted and down, I just need to look to her for inspiration because her attitude and pace are both incredible. It’s good that everyone’s treated the same, nobody is treated differently to anyone else. There is a huge amount of mutual respect for each other within the team and for what we’ve all achieved. At the start of the race, everyone is in with a chance of winning. There are no favorites within the team and I really like that.”

Do you think riders somehow have it easier now, compared to when the event was run in Africa?
“I don’t think the rally is any easier, certainly not the route. When the Dakar was held in Africa there were certainly less safety provisions in place – medical support wasn’t as good, hospitals, medical helicopters, etc. Now we’re in South America, the stages and the conditions are the toughest ever, especially when you factor in the weather and riding at altitude. When we’re off our bikes things are a little better now – back in the day the dudes were in tents so to be able to have campers to stay in is a huge improvement. I’m quite grateful that these days we have a nice place to sleep and you have the luxury of a shower every evening. Last year, Matthias and I shared a camper for the event and we finished first and second, so that was cool. Sometimes it is nice to have that camaraderie with your teammate and have someone close to discuss the day’s racing, it helps keep you both motivated. There are tense times too, times when one of you have been unable to get past the other, or maybe the other rider didn’t want to let you past and you had to ride in his dust for a few hundred kilometers. That can get a little weird when you are sharing a camper at the end of the day, but generally it’s all ok.” 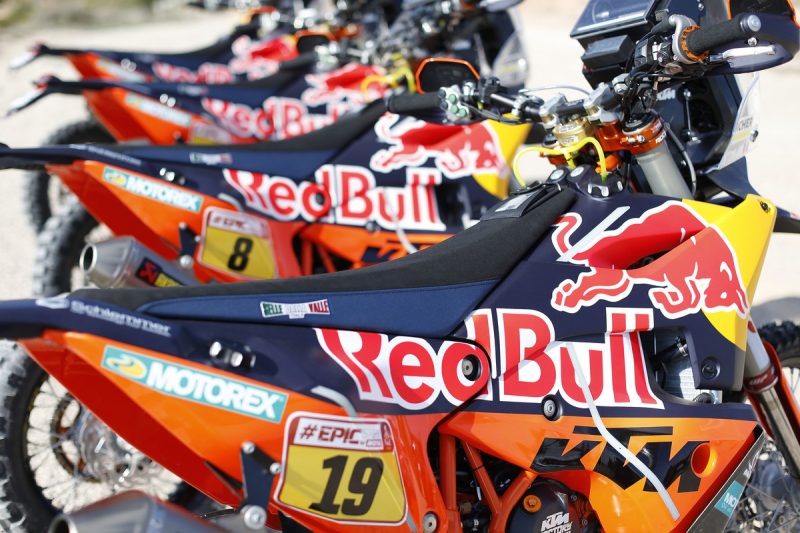 What’s the toughest thing about the Dakar?
“It has to be the length of the days. There are 14 days of riding this year and the longest day last year had us riding for 18 hours. To ride a bike for that long, even if you are just on the road, is tough. When you add in the other factors – heat, cold, terrain, altitude – it becomes way harder. That is the toughest thing, the accumulation of days like that, it has a snowball effect and the stress builds on your body and mind.”

Is it possible to say that you enjoy Dakar?
“There’s a balance – you have to put in long, hard days whether it be training, navigation work or fitness. Then come the races – some days are tough, really tough. If you asked me at the end of a 1,300 km stage in 45-degree heat when I’m hungry and dehydrated, ‘are you having a good time?’ I would probably say, well, I think you can guess the answer to that. But you have to put in that hard work to add value to the result at the finish. It’s the same with many things in life, the harder you have to work to achieve something the greater the feeling of accomplishment when you finally get there.”

Finally, what are your expectations for this year’s event?
“It’s like any sport, after a win it feels like only another win will do. When you finish fifth, then the next year you want to do better, maybe get a podium. For me now, I know that I’m capable of winning so that will always be my goal, and the goal of the team. At the same time, the Dakar is like no other race, so to get to the finish in itself is a massive achievement. This year I plan to do exactly what I did last year – stay consistent, fast and take each day as it comes. Hopefully the reward will be another win for myself and the team.”

Sam will return to defend his Dakar title in 2018 when the rally starts in Peru from January 6. 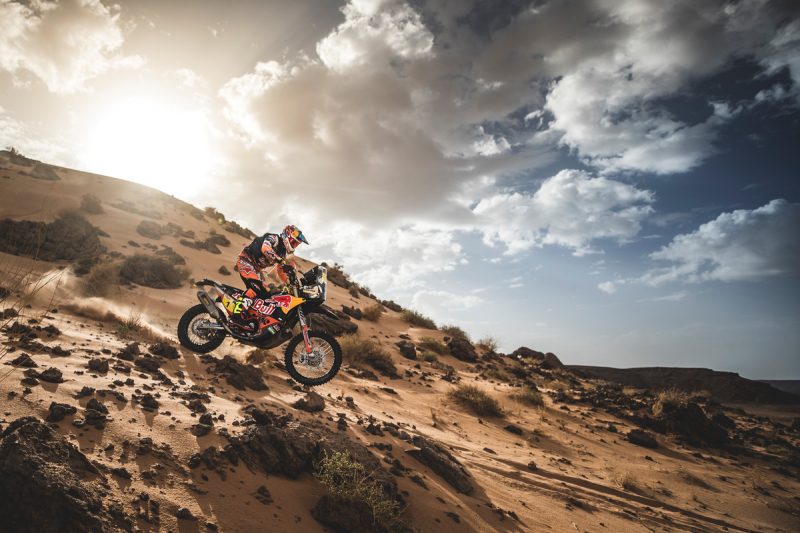 89 Responses to Sam Sunderland: The champion returns to Dakar