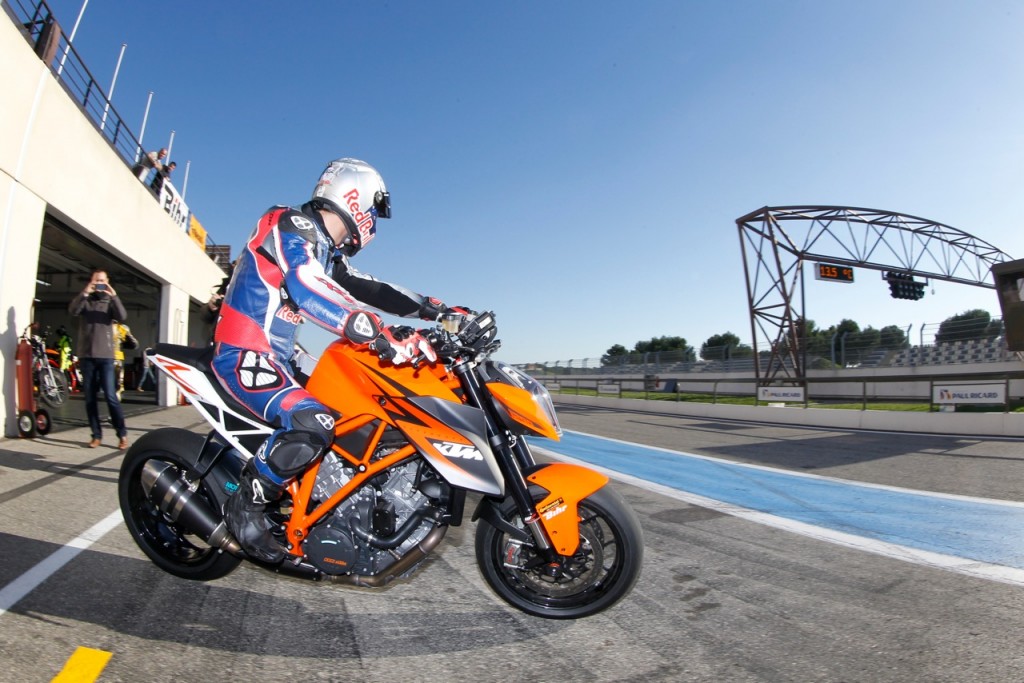 In late November, Sébastien Loeb, nine-time World Rally champion, took part in the last motorcycling challenge of the year: the Scorpion Masters 2013! This event is held at the stunning HTTC site in Castellet, in the Var region of France, and pits some of the greatest riders in each discipline against each another. They compete in Trials, participate in an Enduro special test, battle it out in a Supermoto race and complete two speed tests on the legendary Paul Ricard racetrack – all on the same day!

Spoilt for choice
Once again, Sébastien Loeb raced KTM bikes for most of the races. He arrived on a sunny Friday to inspect the enduro special test and the trials obstacles, and used the free practice to test the new KTM 1290 SUPER DUKE R and compare it to the KTM RC8 R he usually rides. He was impressed by the roadster’s engine and easy handling despite its power, and the Mistral straight prompted him to select the sportier model with its full fairing. Among the top finishers
Early Saturday morning, following the traditional group photo, Sébastien headed to the TT area with the other riders, which included Johnny Aubert, David Knight, Ivan Cervantes, Rodrigue Thain and Frédéric Bolley, who are all renowned, prize-winning enduro, rally raid and motocross specialists, as well as Alexandre Ferrer and Guillaume Jean, who are members of the French trials elite. But this did not intimidate our champion in the least. He was focused and, under the guidance of Bruno Camozzi, Sébastien did impressively well by finishing 13th out of 27 participants!

Sébastien did impressively well by finishing 13th out of 27 participants!

Despite its length and technical obstacles (e.g. tree trunks, scree) littered around the course by the race organisers, the enduro special test did not prove much of a problem for Loeb either. On his KTM 450 EXC and despite suffering from compartment syndrome, which caused him to quickly experience pain in his forearms, he delivered a perfect, first-rate performance and came in 15th!

He had just enough time to get to the Supermoto track, suit up and hop on a KTM 450 SMR, and it was time to go at it once again with some of the big names in this discipline, such as Eddy Seel, Adrien Chareyre or Boris Chambon! With his ever-accurate and agile riding, and spurred on by the fraternal duel with Soheil Ayari, another 4-wheeled racing driver who had come to mingle with the bikers, Sébastien continued to astonish the public, all while staying cautious. The results: Loeb took the chequered flag in 22nd place and was 19th in the provisional ranking, before the short lunch break. 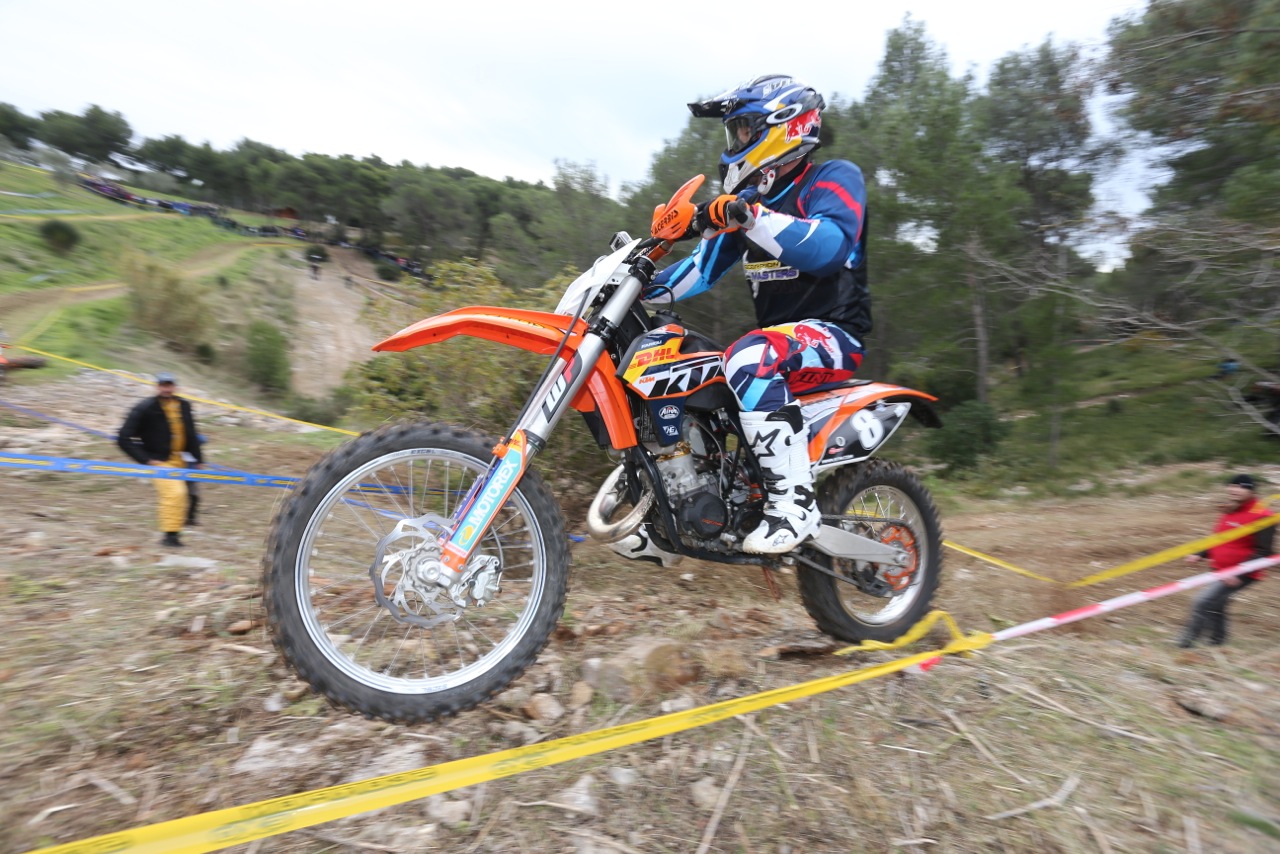 A difficult choice
Unfortunately, as the riders were eating, the rain started coming down. There was a whirlwind of activity in the pits, where the mechanics hustled to change wheels in order to fit the suitable tyres and used their brain power to tune and swap bikes. Though thought to be at a disadvantage in the straights, the KTM 1290 SUPER DUKE R suddenly looked all the more attractive with its full electronics pack and natural riding position. Sébastien changed tactics and decided to ride the new KTM for the qualifying rounds just before the first heat. A choice that proved to have been a wise one in view of his 8th place on the grid!

A half an hour later, Sébastien took his place at the start, showing no signs of the jitters. The track was wet and the temperature was barely 7°C at 3 pm in the afternoon. These were not the most reassuring conditions for Loeb to have when facing off against the likes of Vincent Philippe, Jérémy Guarnoni, Arnaud Vincent, Denis Bouan and Gwen Giabbani! This didn’t succeed in dampening Sébastien’s spirits, though. He started cautiously, before getting a feel for the track and the potential of his bike, and then initiated a duel with David Knight, ex-Enduro World Champion, who is incredibly fast regardless of what surface he’s riding on. He was able to avoid the numerous potential pitfalls around the circuit and, while many riders crashed out early, Loeb crossed the finish line in 10th place out of 22, just behind the colossus from the Isle of Man!

Sébastien impressed in all of the disciplines over the course of the day, mainly on account of his extraordinary ability to adapt. But there was no hiding the smile and the obvious enjoyment he took from this race, despite the challenging conditions. 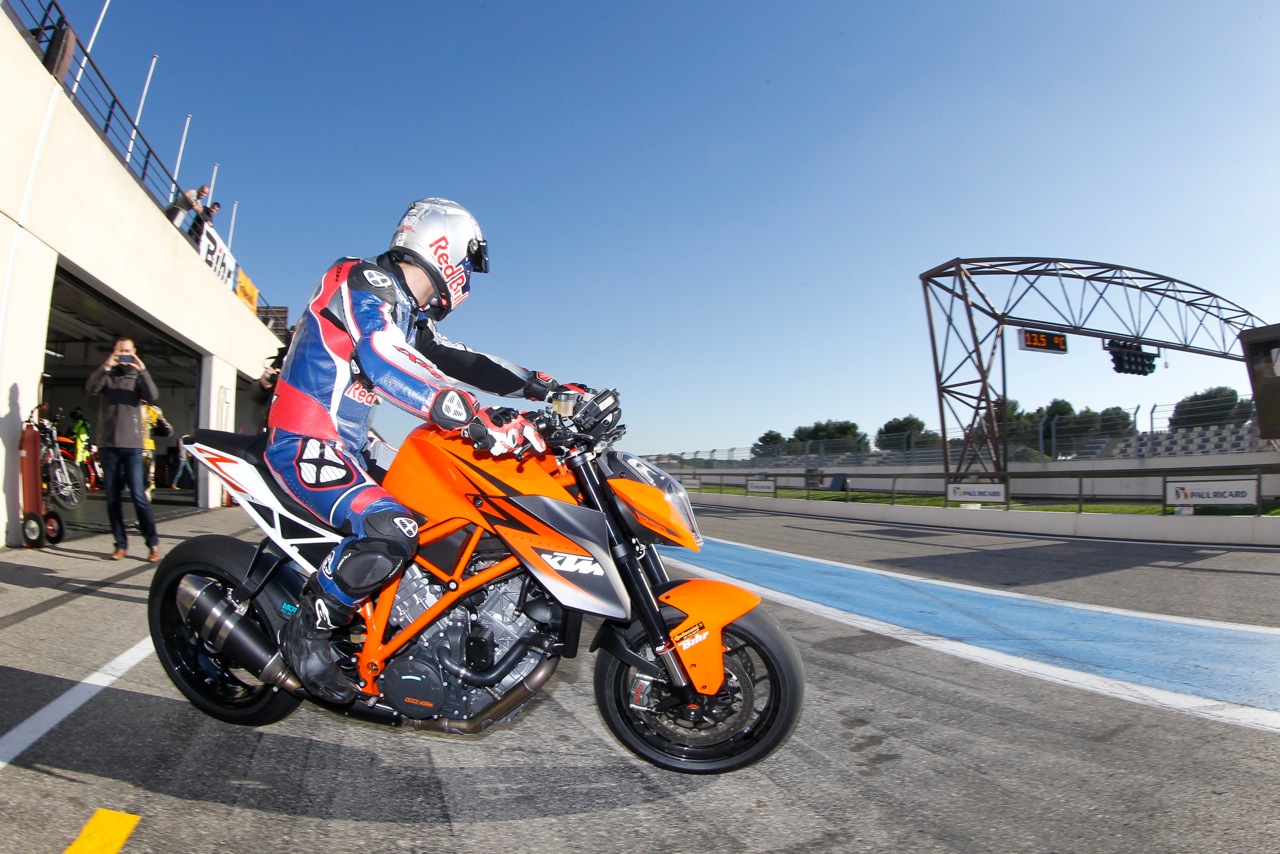 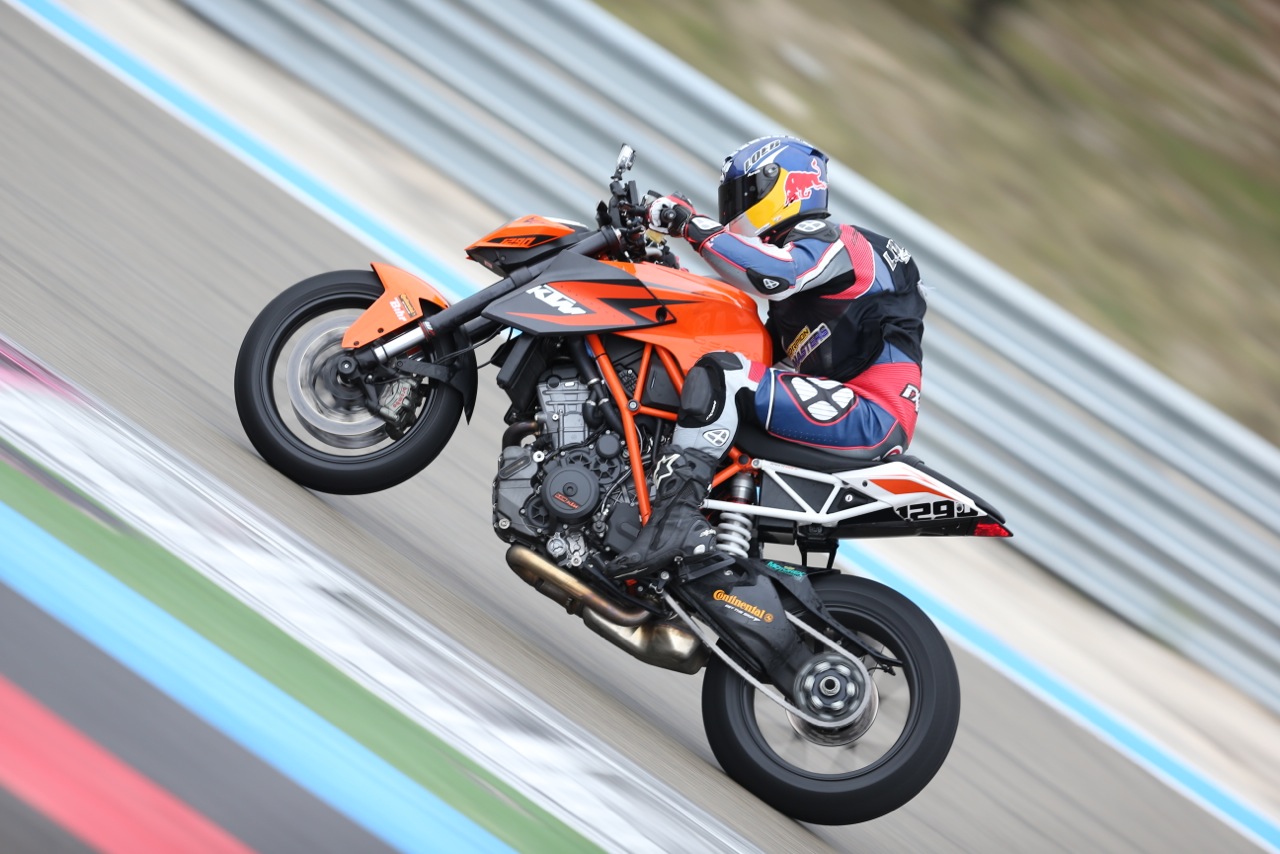 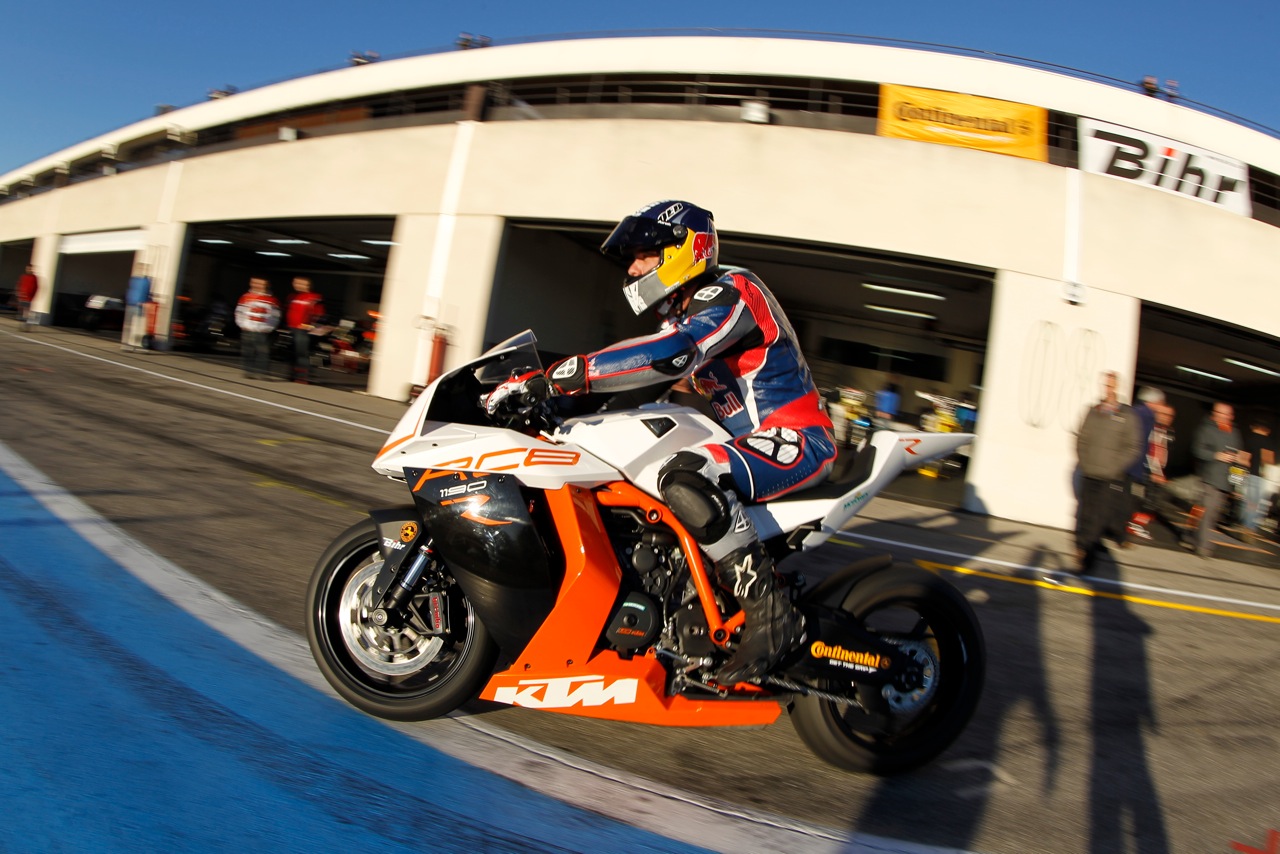 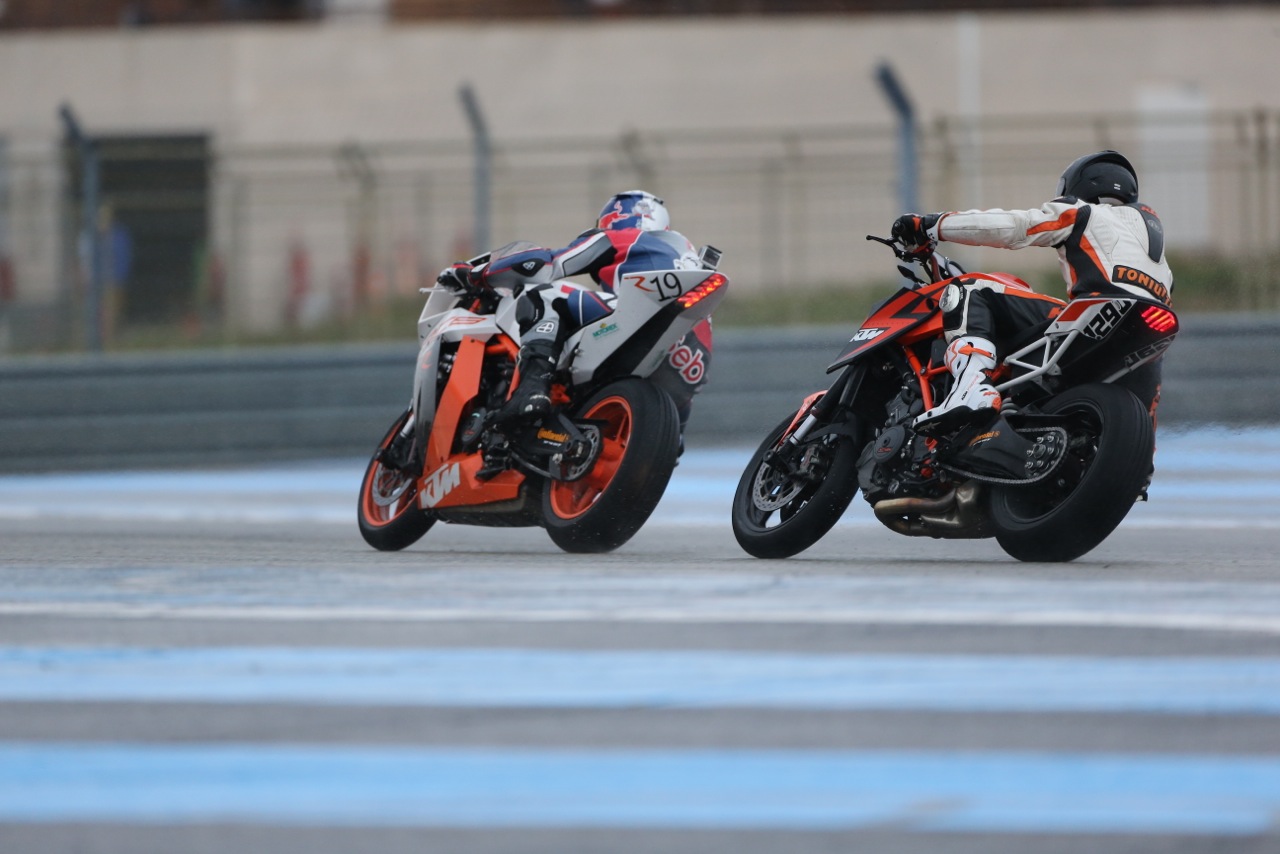 In the end, it’s all about pleasure …
Loeb felt more confident as the day went on, and decided to ride the KTM RC8 R in the second race. This bike gave him the advantage at top speeds, but its rigid frame made handling somewhat more difficult. No problem for Loeb, who, despite the race conditions having worsened further with a drop in temperature of 2°C and even more rain, caught up with his buddy Knight as well as Julien Toniutti, the current French Rally Champion. The struggle between these three lasted for quite a while, with the riders overtaking each other at full throttle in an infectious display of enjoyment. From the sidelines the show was amazing, but Sébastien Loeb didn’t give up and was able to widen the gap between himself and his adversaries. He finished this race 9th and placed 13th overall. Quite a feat, considering the level of the competition. Sébastien summarised this special day perhaps better than anyone:

Sébastien Loeb: “My goal was not to prove anything, but really to enjoy myself in a relaxed atmosphere, much like when I race in a car at the Race of Champions. From that standpoint, everything was perfect and I truly enjoyed myself. It is true that the conditions this afternoon were less than ideal. I was a bit nervous about the start of the race: this was my first motorcycle race and my first start from a grid, and doing that in the rain just made things that much more complicated! But everything went well and I had a great time, especially duelling a bit with David Knight. It really was fun! I ran the qualifiers and the first race with the KTM 1290 SUPER DUKE R, because it’s riding position makes it easier to handle, and the electronics boosted my confidence. I still took a beating in the straights, though! Because I’d had such good luck with the RC8 R in the first race, I also used it for the second race. I rode a bit faster this time and was able to finish in front of David, but the frame is not as flexible as that of the 1290 SUPER DUKE R, and I had trouble getting the most out of it, even if I raced somewhat faster with it overall. It was a great day in an excellent atmosphere. We had some time to talk with each other, to discover the various disciplines and riders from other disciplines… it was a really good time!”: 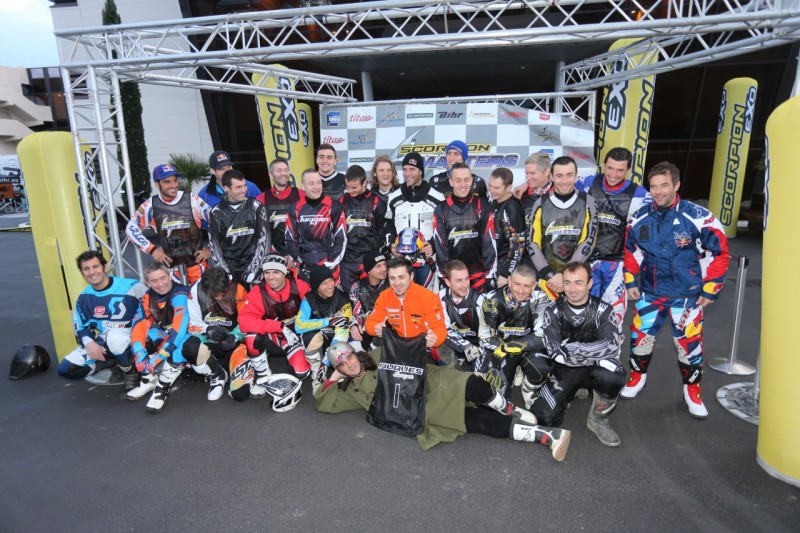