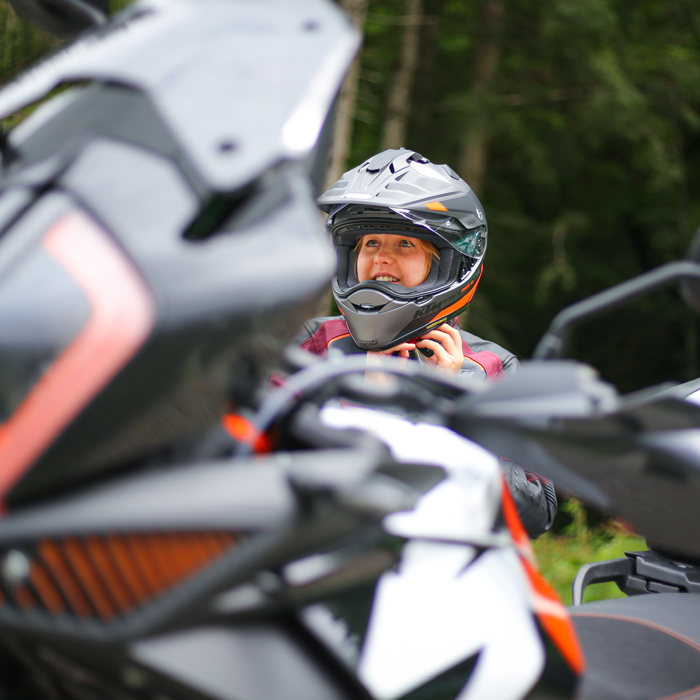 SEEING SOME OF THE WORLD ANOTHER WAY

What happens when a seasoned traveller takes to the back of a motorcycle – a KTM 1290 SUPER ADVENTURE R – for the first time?

“It was pretty illegal actually,” smirks Jacqueline Valeeva. “I was in the depths of north Colombia and this taxi driver seemed to enjoy showing me how to ride a motorcycle for the first time.” When she hasn’t been recruiting for a tech company in her hometown of Brussels the 26-year old has backpacked, flown and bussed her way around the world, but the delights of adventuring on two wheels remains a mystery, beyond the worrying (but exhilarating) minor blast in South America.

Many people who like to venture to new pastures had their wings clipped in 2020. Jacqueline’s normally wide appetite for discovery had been tightened with the restrictions of a global pandemic, but, in keeping with the spirit of a person with open horizons and a passport with almost twenty different stamps, the prospect of a first escape on the back of a KTM 1290 SUPER ADVENTURE R through Austria represented a different frontier. “I like the idea of it. The thought of feeling the speed of the bike and a closer contact with the scenery and the road ahead. Why not?” she said.

The plan was simple. Jacqueline would hop on the back of the KTM 1290 SUPER ADVENTURE R – ridden by friend and Salzburg resident Billy – with a tank bag and rear luggage box, KTM ADVENTURE S JACKET, PANTS, ALPINESTARS ANDES V2 BOOTS and SHOEI HORNET ADV HELMET all provided from the KTM PowerWear catalogue and describe her first sensations as a travel/adventure pillion.

Her trek would take her south from Salzburg to the Italian town of Trieste. The journey would involve an 800km round trip and more than 14 hours on the KTM through topography on the fringes of the Alps. “My main worry is comfort, and from being stuck in the same position for a long time,” she admitted. Jacqueline’s first hurdle however was maximising storage. Although she was used to the limits of a backpack, the tank bag and top case meant a new challenge for a sojourn that would last three days. “Difficult!” she said. “I wanted to pack for different weather and conditions, and if it was more than a week then I would have been a bit more worried! It was kind of a pity not to be able to buy anything on our travels but if I did the trip again then I’d re-think the packing and even use vacuum bags to maximise usage of the space.”

There was an added benefit to the seat unit: “It was good having the box behind me so I could lean on it! It might have been exhausting for the posture otherwise.”

KTM’s high-quality touring gear – engineered to cope with diverse weather from warm temperatures to small showers and colder climes – was another ‘first’. “Initially, it felt like a lot to wear, I had no idea that so much protection was needed but at the same time I felt quite safe,” she noted. “I was impressed by the details like the vents and the zips to get more fresh air coming in. It was comfortable after a while.”

The hike down to the medieval port enclave of Trieste saw the KTM 1290 SUPER ADVENTURE R come into its element with curving mountain passes, epic views and steady cruising highways. The sensations of such a ride-out are enough to get the blood flowing for any motorcyclist but for someone new to two-wheels and the possibilities of long-distance travel on a bike then it was a novel and exhilarating encounter. The KTM 1290 SUPER ADVENTURE R was an ideal vehicle for the job; the bike boasts a 23l fuel tank for long range, several forms of ABS for increased safety, 3D padded seat foam for cosiness, effective but easy ergonomics, and a with 160hp and 140Nm of torque it can thrill in the flick of a wrist.

Unsurprisingly the occasion left a lasting mark. “The feeling of excitement and the adrenaline of being able to go very fast in just a few seconds, that was…well, it gives you a different experience,” Jacqueline said. “I enjoyed getting to our destination and, importantly, when it came time to head back home, I didn’t have that ‘despondent feeling’. It was more a case of looking forward to the next step of the trip.”

On arrival back in Salzburg it was evident that motorcycle travel and touring had yet another convert. “Honestly, it was pretty awesome. The best road trip I’ve had. In a car you are just killing time until you arrive. On the back of the bike you have that excitement, but you almost have to anticipate where you are going as well. You are part of the ride. It helped that we were cruising through the Austrian mountains and the scenery was amazing. I’d love to do it again.”

13 Responses to SEEING SOME OF THE WORLD ANOTHER WAY