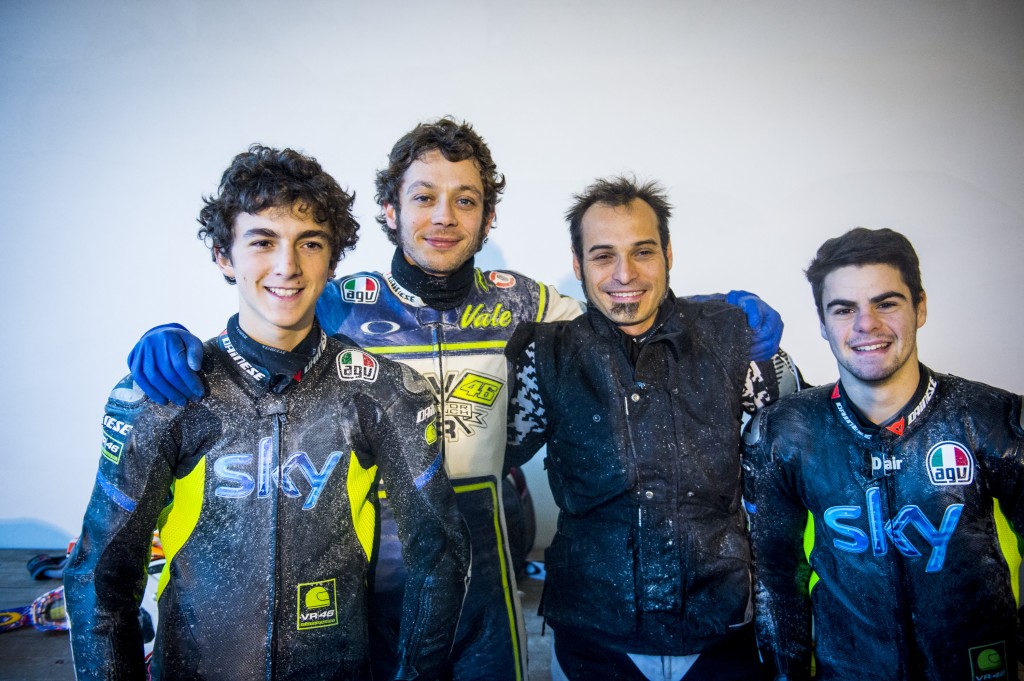 An exciting new KTM Moto3 team had a high profile launch recently in Italy. Here is how SKY-VR46 came together. 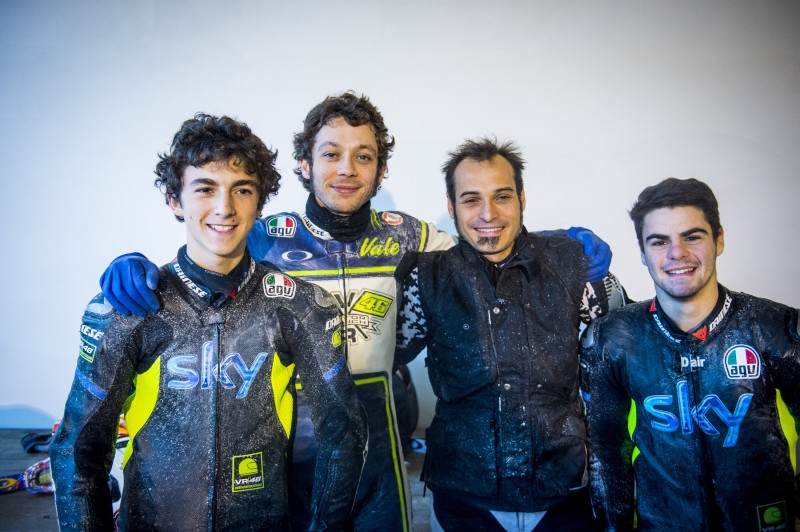 Early September: Teams wishing to field a KTM Moto3 motorcycle for the 2014 season must deposit a fixed order. Upon close of the deadline requests for 18 entries have been received by KTM Factory Racing. Eight will use a KALEX chassis made ​​of aluminium, the others a steel tube frame made in Mattighofen. Among the clients is a superstar: Valentino Rossi.

Mid-October: News leaks that the nine-time world champion and winner of 106 Grands Prix – who is still a factory rider in the MotoGP class and has been part of the GP paddock for eighteen years – has started a Moto3 junior team under the label of his merchandising company VR46. Speculation goes wild with several riders’ names attached but nothing and nobody is officially linked.

Early November: Confirmation that Rossi has contracted Vittoriano Guareschi, ex-racer and recent Ducati MotoGP Team Manager to lead the new VR46 project. The riders also have been announced: Romano Fenati (17) and Francesco Bagnaia (16). Both have been racing for Team Italia in Moto3. TV channel SKY – a new broadcaster for the sport in Italy – have come onboard as main sponsor. 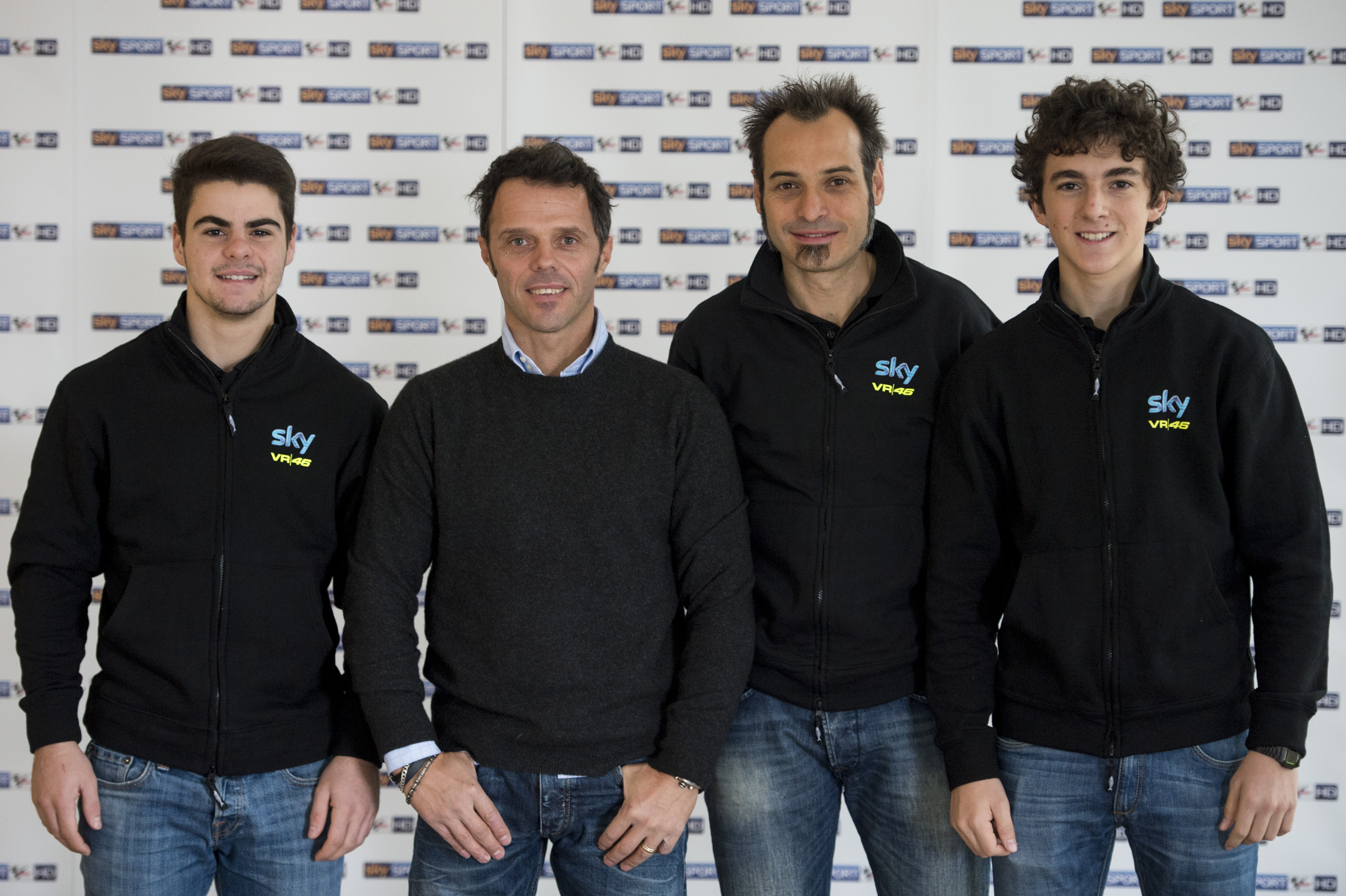 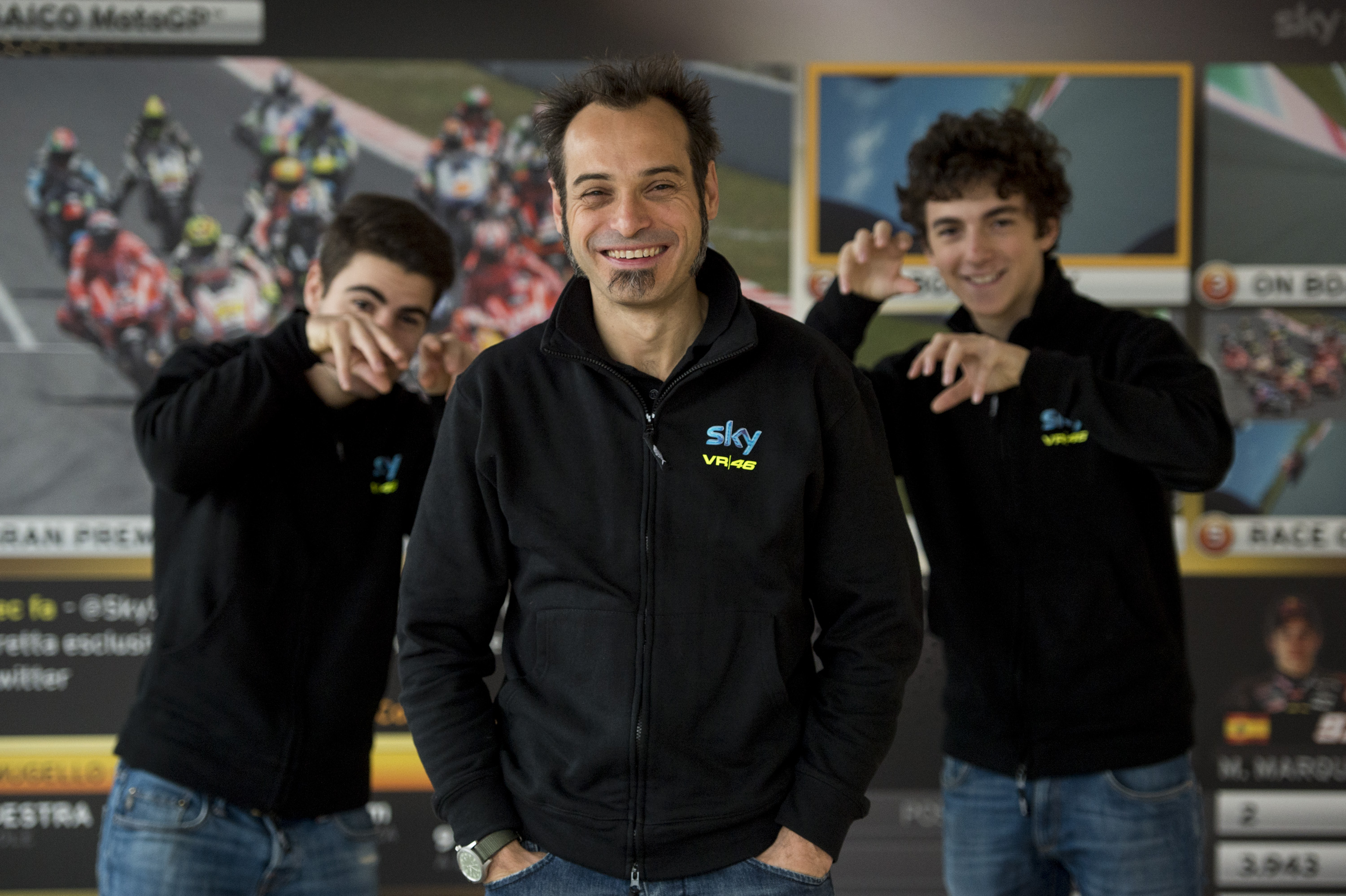 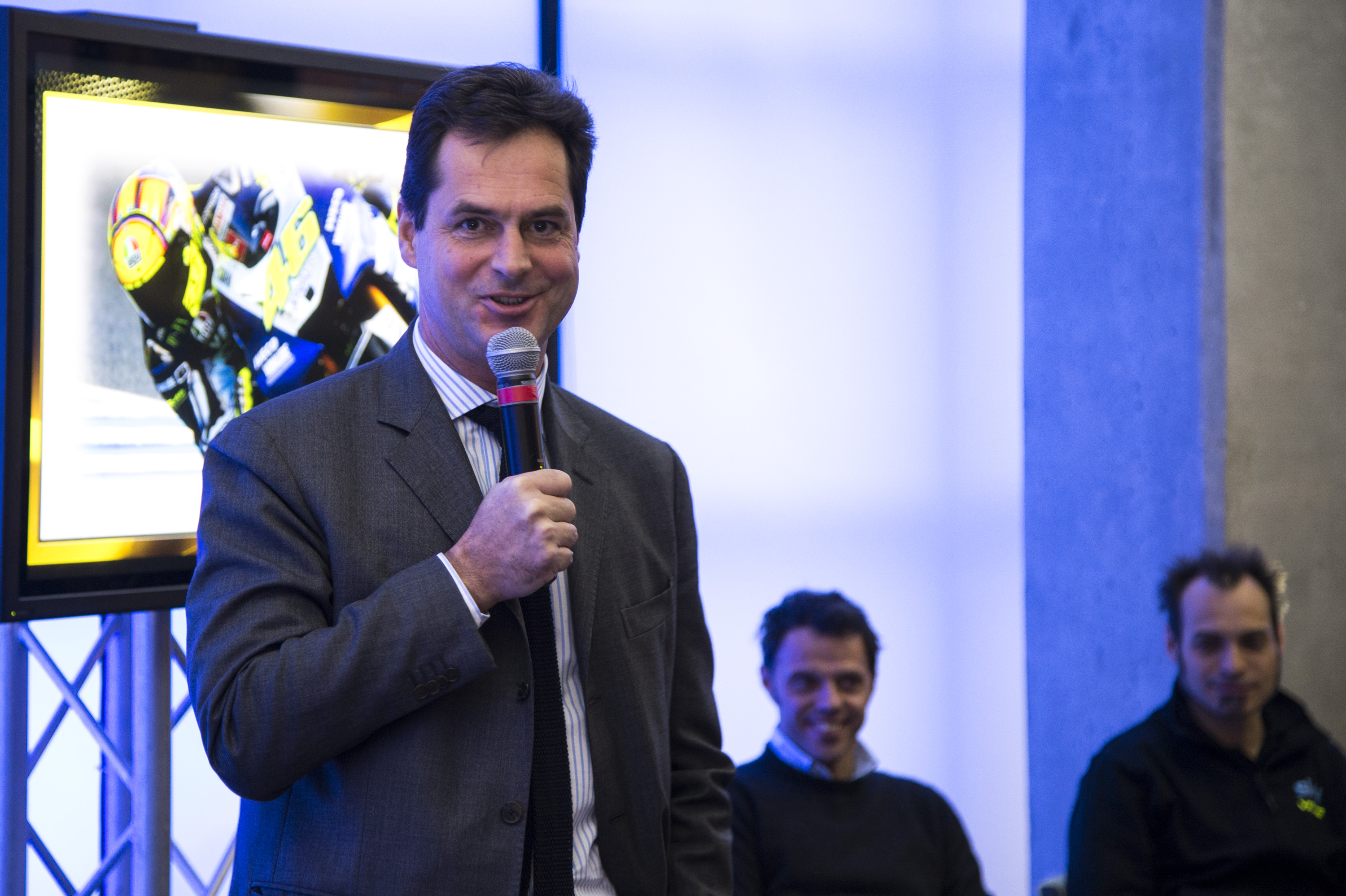 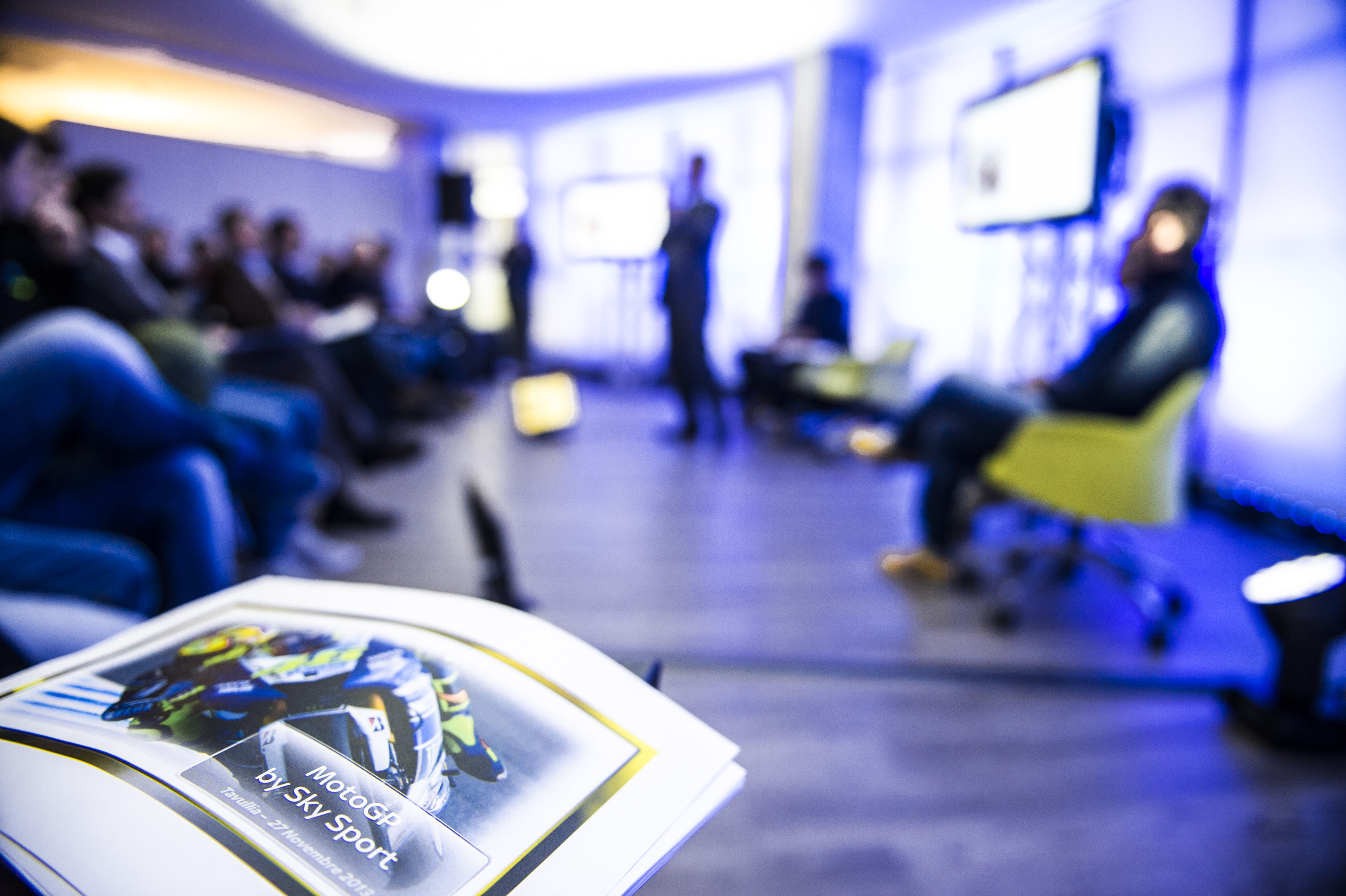 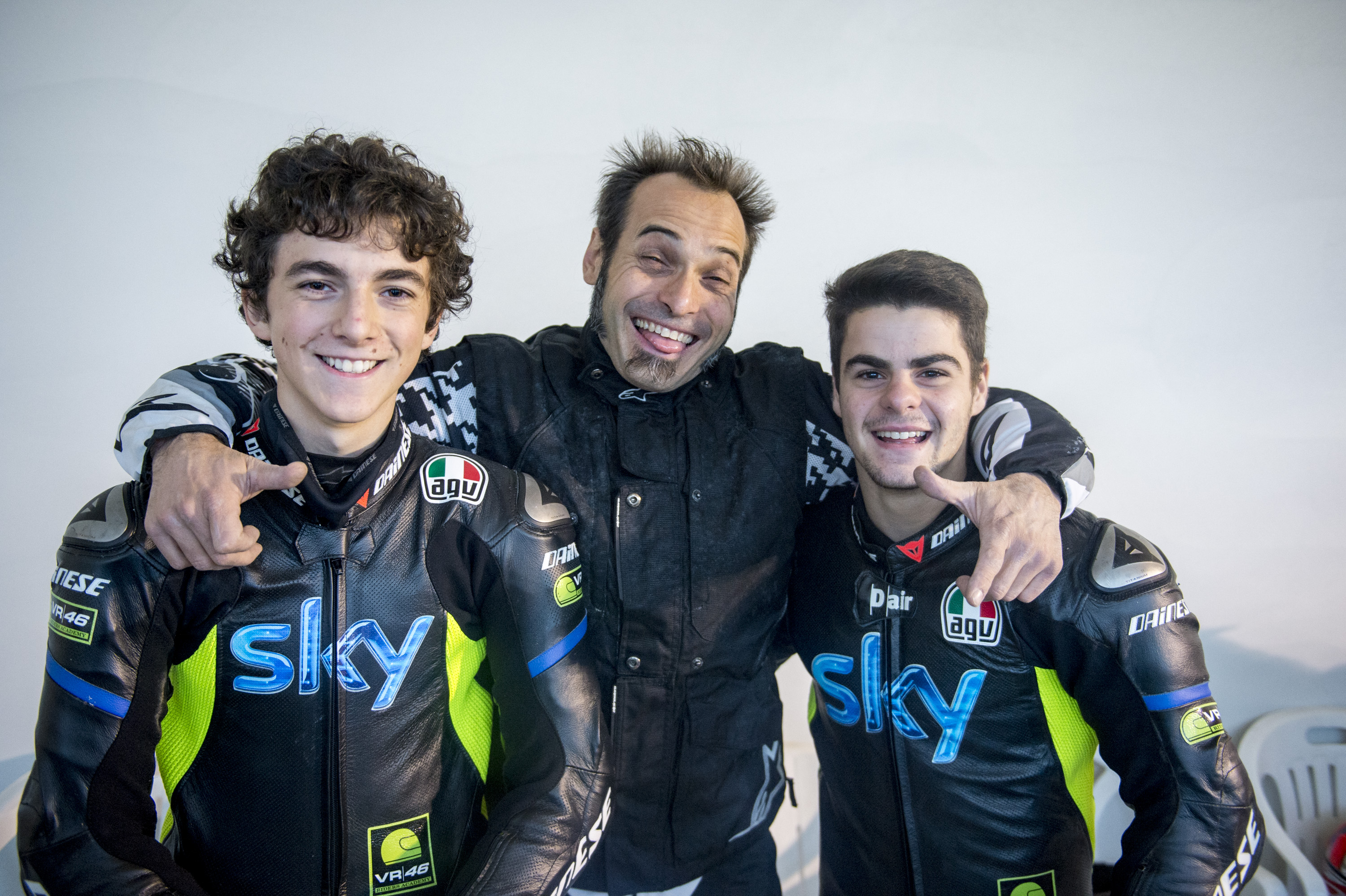 Vittoriano Guareschi: “After 13 years with Ducati I’m really excited to start a new adventure with KTM. I’m ‘orange’ inside. I use to ride a lot of Enduro with my KTM. Last October I was looking forward to following the ISDE Six-days enduro in Sardinia, but my agenda was so full and I could not go there to see the event…but I will try to find the time to compete in the KTM Italian Enduro Trophy in 2014! Coming to Moto3, I was really curious about the KTM RC250 GP bike and I have to say that it is a beautiful machine, with lots of nice technical details.” 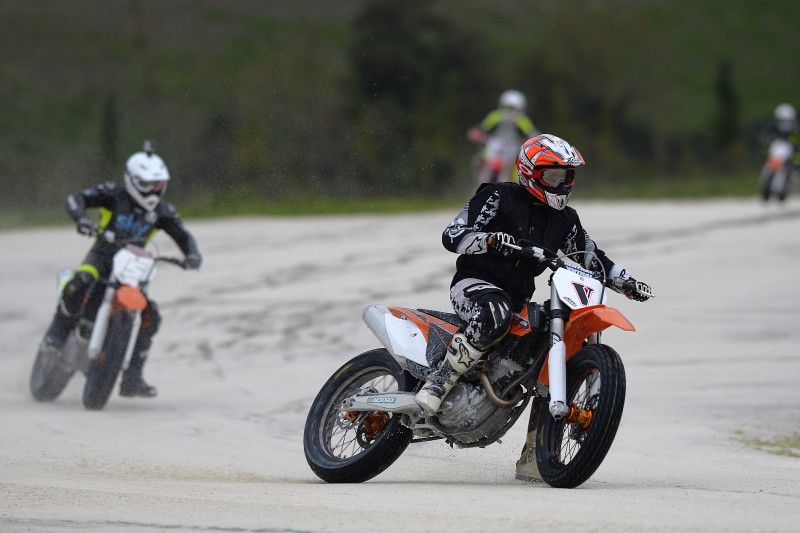 19/20 November: In Almeria, Spain, Fenati and Bagnaia complete two days of testing on 2013 KTM Moto3 bikes. The official presentation for SKY-VR46 team is scheduled for late January 2014. With SKY taking over MotoGP coverage from the traditional broadcaster Mediaset (after more than 10 years), a media event on the ‘Rossi Ranch’ is quickly planned to kick-off the SKY package.

Romano Fenati: “I’m so happy to be part of the new team and on top of that to ride a KTM. Compared with the Honda, the RC250 GP is so different, from the frame to the engine. I feel good and after the tests in Almeria I’m really confident for the next season, I know that I can do great things!” 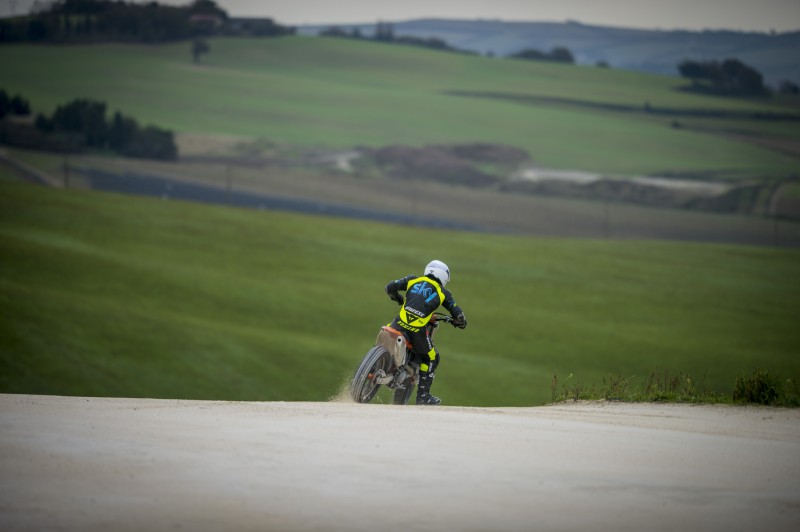 22 November: The Ranch, a mixture of dusty dirt track and twisty Supermoto layout (with some off-road trails also scattered around), is Rossi’s personal playground and practice field. The track is sprawled over a hilly green location in a valley setting near Tavullia. The VR46 youngsters ‘Fenny’ (Fenati) and ‘Pecco’ (Bagnaia) of course need suitable vehicles in order to be able to have a blast, so ‘Vitto’ (Guareschi) calls up KTM Italia in Albano S. Alessandro (near Bergamo). Angelo Crippa, Managing Director does not hesitate to quickly supply three orange bikes.

Francesco Bagnaia: “It’s a dream come true! I’m so excited to be part of the VR46 team! The bike is great, the team is superb and I’m honoured to be part of such a great project.” 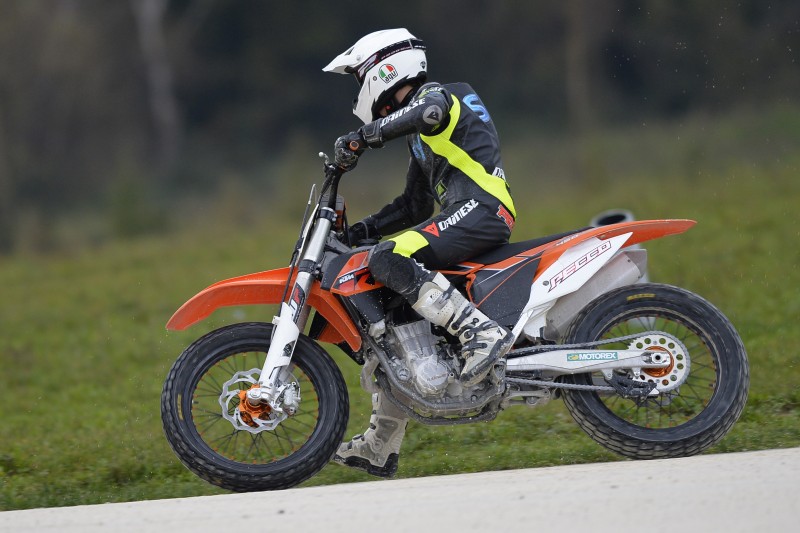 26 November: Paolo Fabiano (PR/Marketing Manager), Luca Ghislandi (KTM Mechanic) and Roberto Rossi (Event & Motorsport Manager) deliver a KTM 350 SX-F and two KTM 450 SX-F to the Ranch. The bikes have been specially prepared for dirt-track and have been finished just in time with wide-spoke wheels and knobbly Maxxis tyres. The Italian WP branch has lent their expertise for the suspension.

27 November: The SKY-VR46 Ranch event kicks into life. It starts with a press conference at the headquarters of VR46 before moving to the dirt. Journalists, riders and friends then head to Valentino Rossi’s restaurant in Tavullia (“da Rossi”) for a quick break. Ex-GP rider, champion and winner Loris Capirossi is also part of the group due to his new role for SKY as co-commentator. Around 30 Italian press and photographers are out to cover the event along with SKY’s cameras. Rossi, Fenati, Bagnaia, Guareschi and more full-throttle artists put on a demonstration for several dirt track laps and drift on the tricky slopes in spectacular fashion. 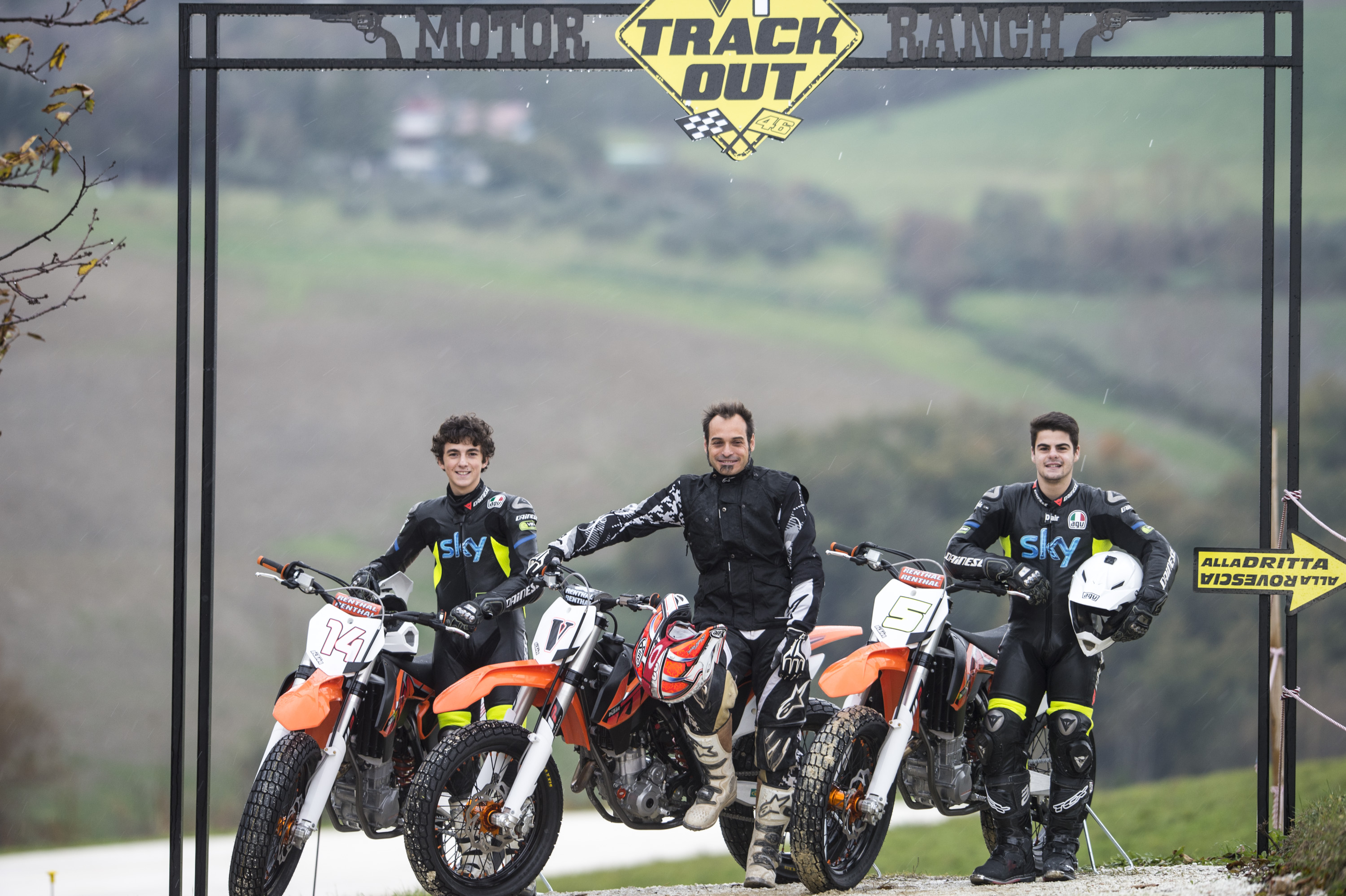 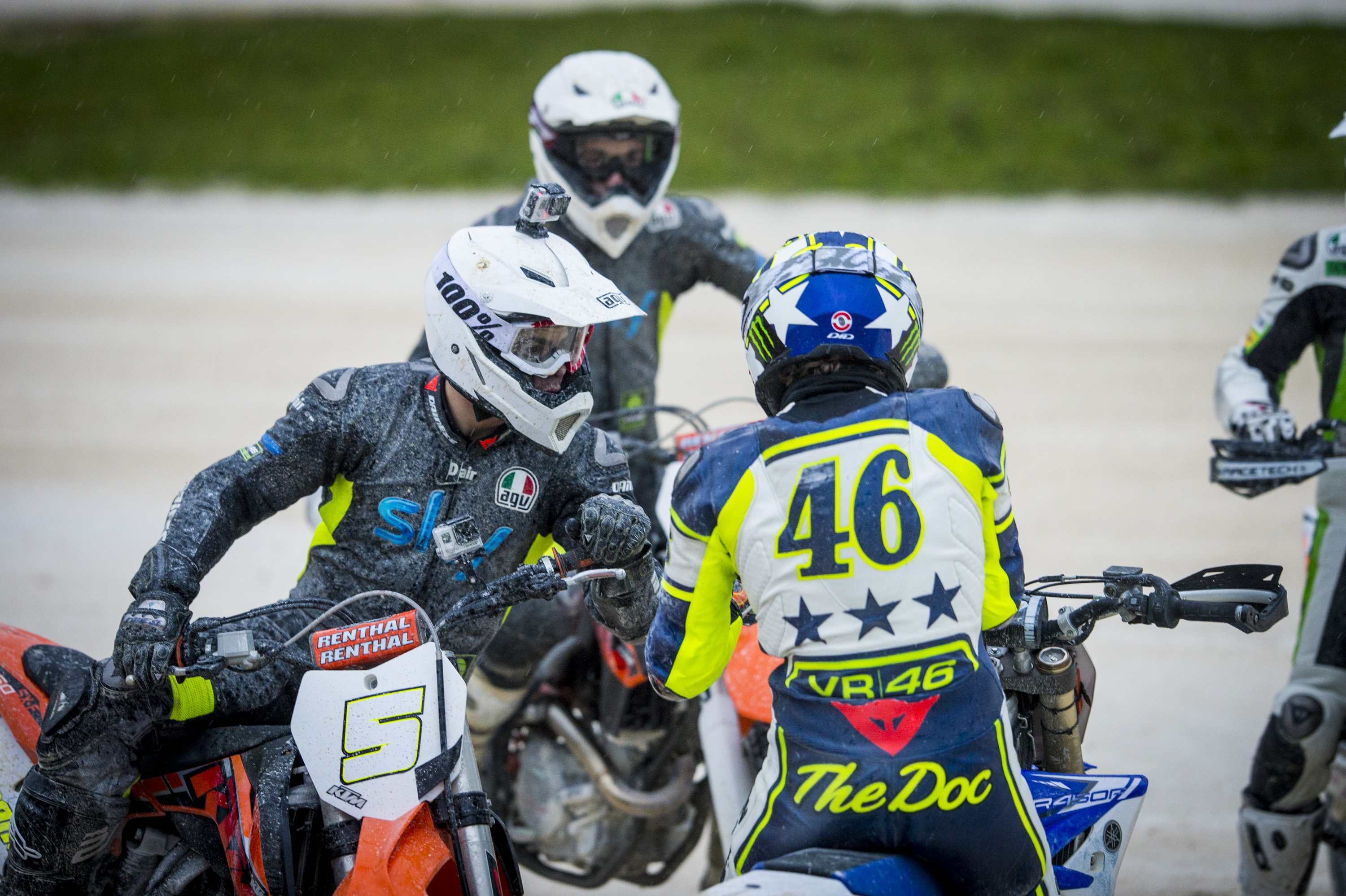 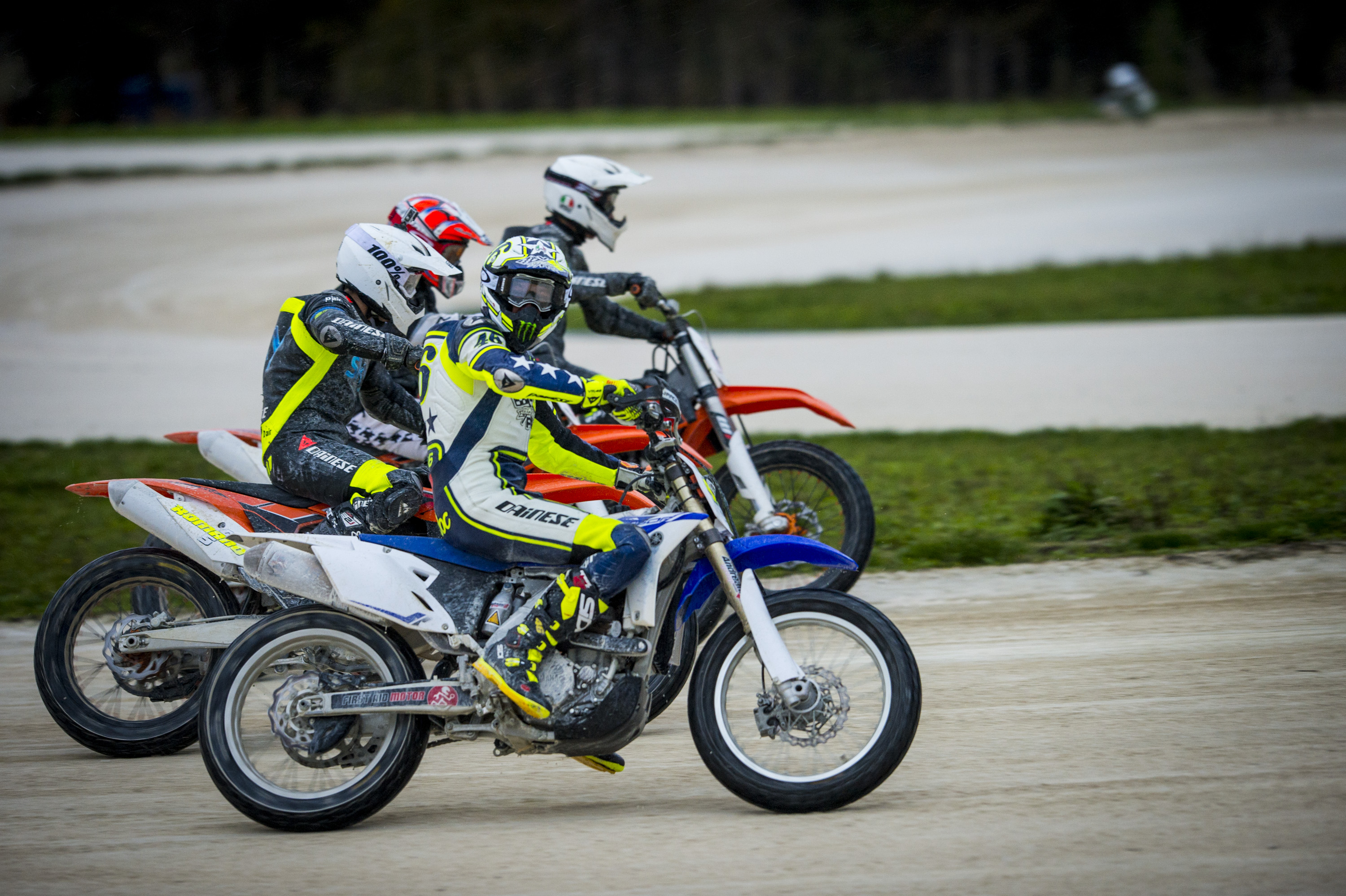 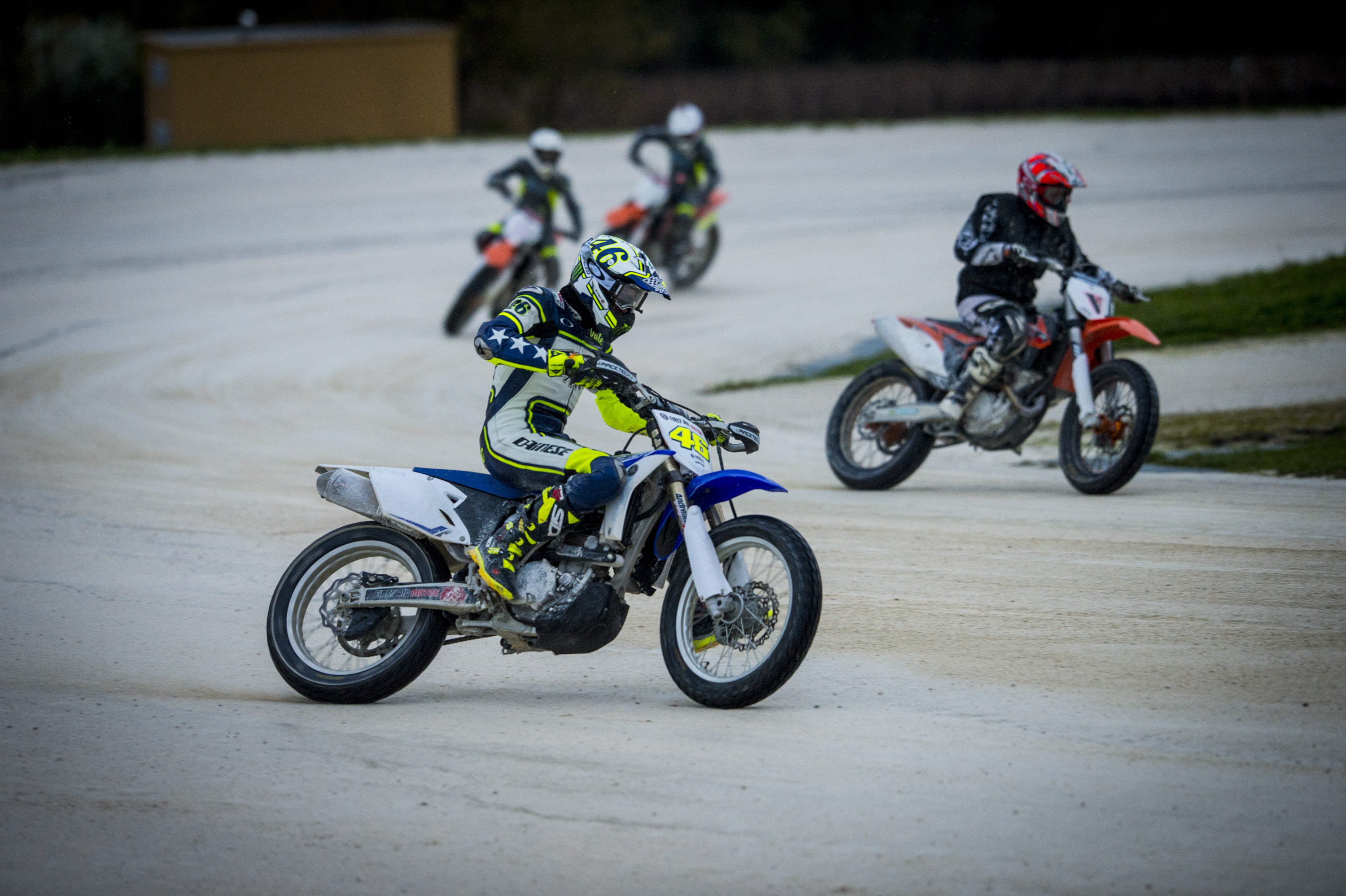 The weather for SKY-VR46 media event was not necessarily the best but despite rather cold temperatures and even a snowy backdrop everything went to plan. The Ranch, with a curvy layout designed by Rossi himself, turned out to be a fine and apt location. No wonder that ‘The Doctor’ can frequently be found lapping the facility with friends or colleagues from the racing scene; Nicky Hayden has already looked it over and Tony Cairoli gave a motocross master-class. 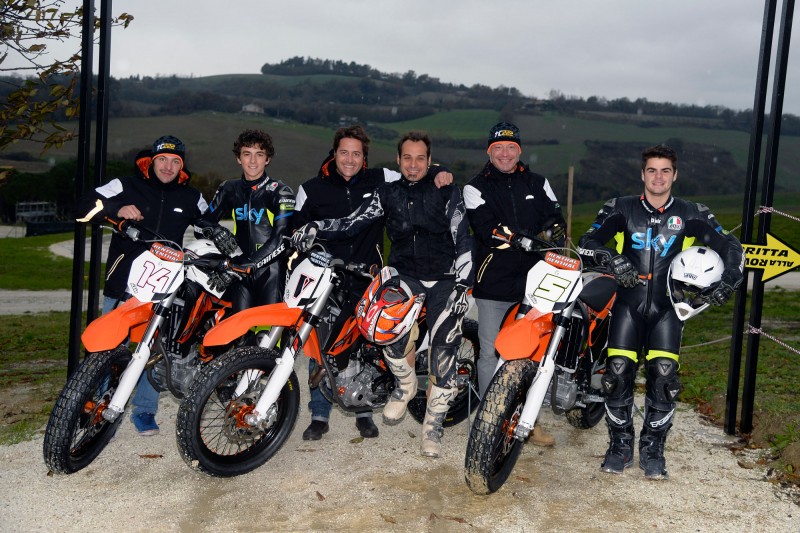 Paolo Fabiano sends info and photos to KTM HQ in Austria. Full of enthusiasm he told us: “In a way it was exciting to prepare the bikes in almost zero time and WP technicians worked closely with us. The riders appreciated the bikes from the first run and now have perfect training tools to improve their performance in the following months. I was actually celebrating my 42nd birthday at the Ranch! It was so exciting for me to be part of such a great day, especially when Valentino signed the special celebratory number plate I received.” 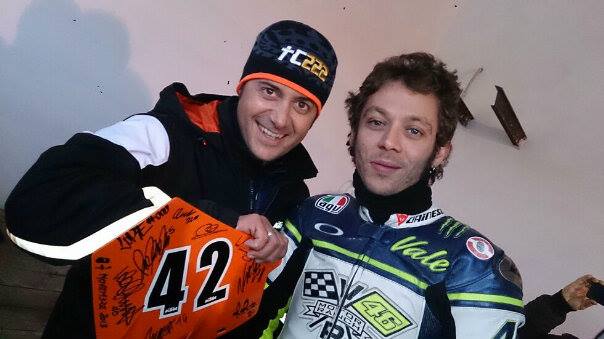 121 Responses to SKY-VR46 Team at Rossi´s Ranch: How it all happened