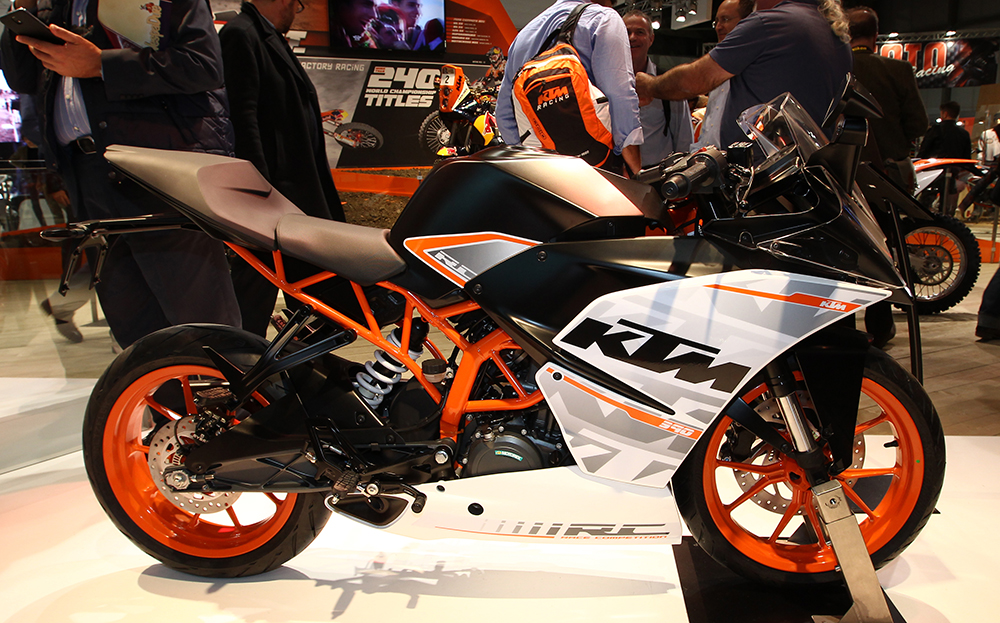 Something new in the air: RC all the rage in Milan EICMA show

The EICMA show in Milan is one of the motorcycle industry’s biggest annual gatherings but KTM have treated it as the ultimate teaser opportunity in recent years. Watching MotoGP commentator Toby Moody chat with Mattighofen bosses behind covered motorcycles as the lights shine on yet another significant presentation has become an integral part of the show’s programme. 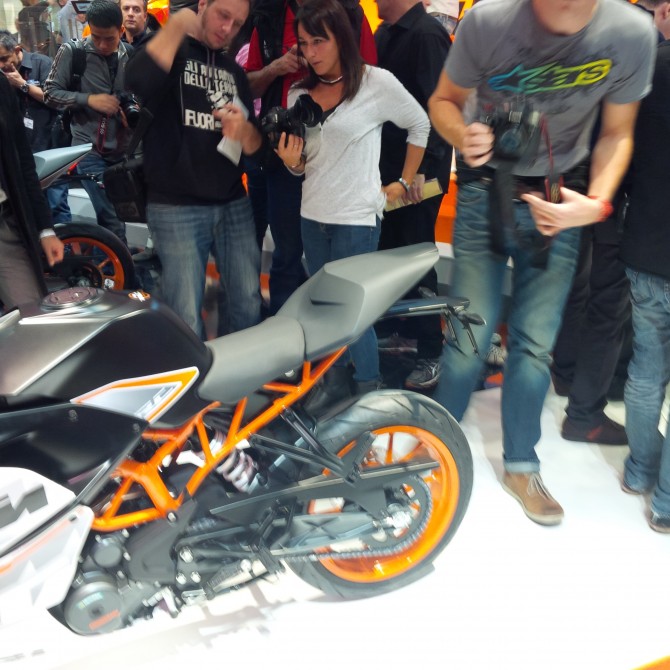 There are numerous perks to working as a journalist in this field but gaining sneak peaks and previews to sumptuous new machinery is definitely one of them. It would take something special to top the engine spark and unveiling of the 1290 Super Duke from 2012 for the ’13 edition of the show that opens to the public (and is well worth a visit due to the sheer treasure trove of products on display) from Thursday. What laid in store were the first physical production models of the 1290 – truly jaw-dropping in all-black – but also the maiden viewings of the RC range: a sporty trio of fresh 125, 200 and 390 bikes with a direct lineage to KTM’s record-breaking Moto3 racing effort.

Simply casting an eye around the stand shows the depth of offerings that the Austrians have managed and it is all thanks to a ‘sixth gear’ of production in the financial crisis years that have helped the brand make such an impact; and that’s without forgetting the added role of the shiny Husqvarna plinth only a few metres away with another spread of technology. A 250 two-stroke Freeride sits spitting distance from a 2014 RC8 while the new Rally 450 is also in the eye-line. It seems like there is a bike for every mood.

The RC brothers slot nicely into the middle of it all. The specs can be found on the KTM website but the significance of the bikes complete another piece of the Orange ‘pie’. “The strategic plan behind [the RCs] – as always in KTM – is to have a sporting tie-in with our models,” explained Head of R&D Philipp Habsburg to the KTM Blog. “We started racing Moto3 two years ago and we think it has been a success because we are actually beating the world’s biggest motorcycle manufacturer and we have 20 consecutive wins; we are quite proud of that. The natural progression is to take a homologated version to the street. We took a lot of technical-driven elements from the Moto3 bike into our new RC model line-up.” 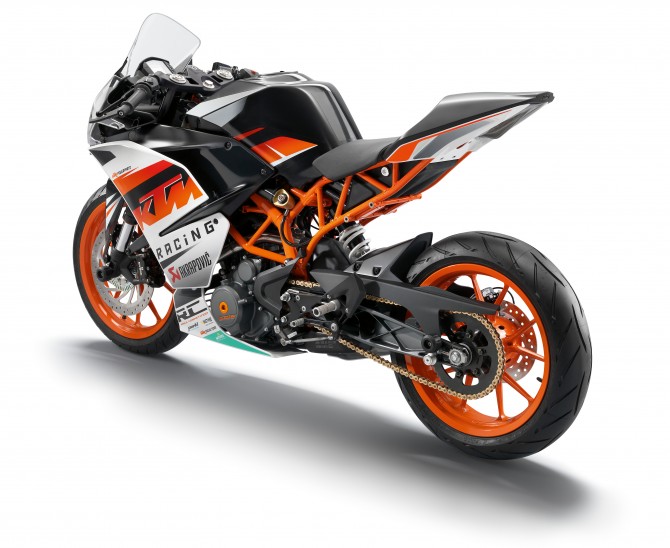 Any examples? “In Moto3 I think one of the things that differentiates KTM from the other brands is the steel trellis frame. We have a lot of experience with that and we think it is the better way to build frames, compared to the aluminium versions from our competitors. We are working hard on this area and what you see on the RC models is an adaption from the Moto3 bike for street use. For sure it is not 100% the same because there is that racing difference but there are important similarities.”

The Moto3 theme was prominent at EICMA where current series leader Luis Salom banished some of the nerves in anticipation of his title showdown at Valencia on Sunday by throwing the covers off the RCs. The smaller bikes will boil the hormones further of the teenagers and the youthful element, but the boy racer in a great many of the press in attendance were unable to avoid the inviting looks of the 390; the basis of which will form the 2014 ADAC Junior Cup single make series.

The standout feature seems to be the unusual but brilliant all-foam seat. Philipp reveals more: “The idea comes in the very first stage of the prototype. We tried to fix a seat on it and it didn’t look so good. We were searching for solutions but the better a suggestion looked then the less comfortable it was! The 125 is aimed towards youngsters and most kids want to take their friends or girlfriends with them. They want to look cool, but it also has to be rideable! We considered the foam and found a supplier in Canada – the only one in the world working on things like that – and now we have a perfect rear end of the RC bikes. It looks like a racing unit but it works for the pillion.”

“It was not cheap!” he adds. “But I think it is a real selling point of the bike. We are also proud of the headlight because that is something new for the motorcycles of this class. The ABS is also fantastic. For young rider who mostly need the contribution of their parents to own a bike then this aspect of safety is something that counts for everyone.”

With the RC lift-off KTM have placed yet another piece of candy into a packed sweet shop. The choice is now comprehensive. “I believe that we are now nearly fully equipped in terms of our line-up,” affirms Habsburg. “There are still some missing links which we want to fill up for next year. For sure there is new technology and we are working hard on it.”

Goodness gracious. Until next year then…

58 Responses to Something new in the air: RC all the rage in Milan EICMA show