STAYING POSITIVE IN THE MIDST OF ADVERSITY: HAFIZH SYAHRIN INTERVIEW

Struggling to go through his paces in the MotoGP™ category, Hafizh Syahrin isn’t letting adversity affect him. The Red Bull KTM Tech3 rider still walks around the paddock in good spirits. He has a unique personality, which sparks interest in his past, present and future. 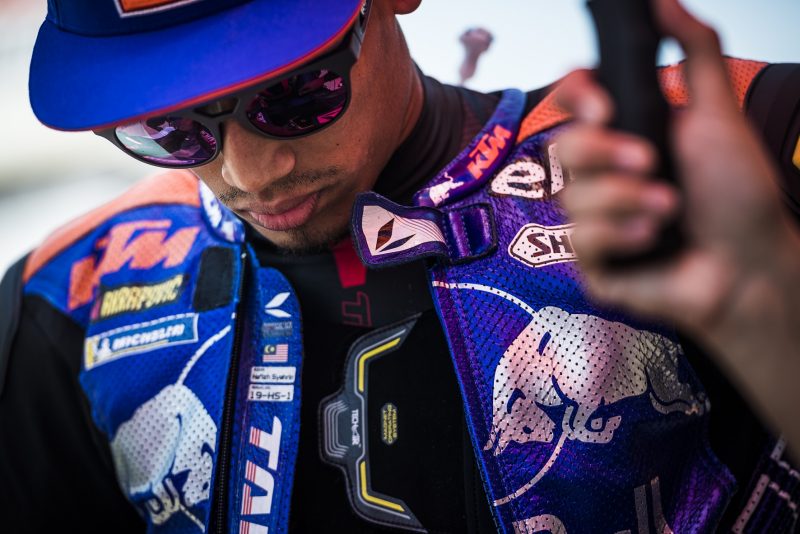 “Would you like a drink?” A smiling Hafizh Syahrin Abdullah shoots behind the bar and takes two bottles of water from the fridge. A sprint up the stairs quickly takes him to the first floor of the luxury hospitality unit that Red Bull KTM Tech3 has planted at the MotoGP™ paddock.

The team’s temporary base serves as the backdrop for a candid interview with the first Malaysian MotoGP™ rider ever. Searching for speed thus not achieving the desired results, this seems to have little effect on his mood. Laughing and joking still appears to be his trademark.

Strangely enough, the interview with the KTM rider begins with his name, because the media are always using the wrong combination. “Hafizh Syahrin is my name, and Abdullah is my surname. I’ve only ever gone by Hafizh Syahrin, so that’s what I’m known as now. Officially, Abdullah should come after it.” 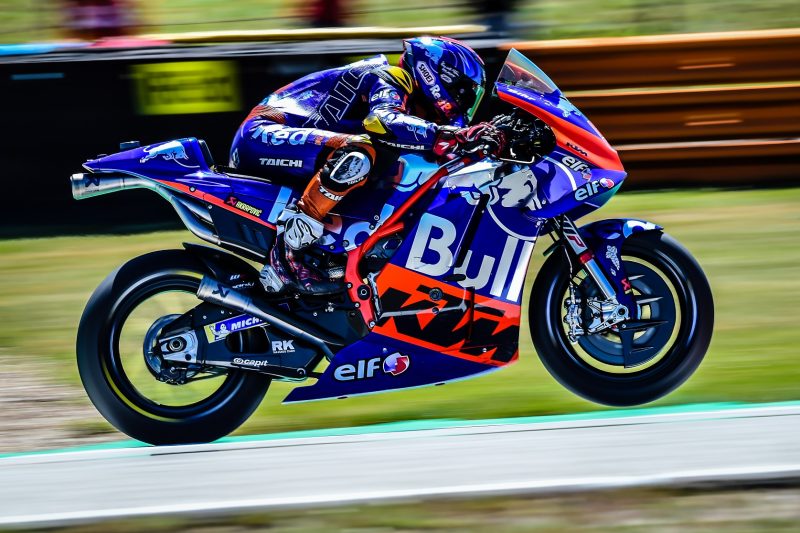 Typically for the Malaysian, he’s not bothered by it at all. He’s only here for one thing, and that’s racing. This year, he’s racing on a KTM RC16 belonging to Tech3. The French team underwent a big transition last winter when they started working with the new equipment.

Team owner Hervé Poncharal signed a three-year contract with KTM in the beginning of last year, making him the Austrian manufacturer’s first customer team in the MotoGP™ class. Hafizh Syahrin witnessed the change first hand, as he was already riding under the Tech3 flag in 2018.

The Malaysian’s second MotoGP™ season hasn’t been great so far, as he only made it to the top 15 twice in the first half of the season. This has resulted in three World Championship points. When asked about this big difference compared to 2018, Hafizh Syahrin gives a very honest answer. “The transition is turning out to be quite difficult. It takes time to get used to the RC16. But it’s a work in progress — and with hard work, I think we can still make a lot of improvements.” 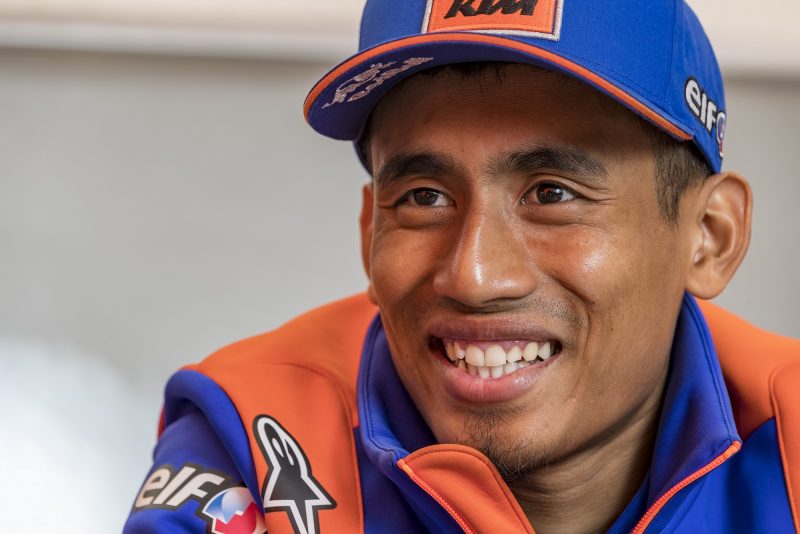 Quite a difference
The name Hafizh Syahrin appeared on the permanent entry list for the 2018 MotoGP™ season quite unexpectedly. Even for the 25-year-old rider, it was quite a surprise that he was able to compete with the best riders in the world. “I still remember being told I could take a seat on Tech3’s MotoGP bike. I was in Spain preparing for the next stage in my career, because in 2018 I was supposed to be riding with the SIC Racing Team in Moto2 for the first time. I was training on my mountain bike in a mountainous area when I heard my phone ring. When I answered, it turned out to be Hervé Poncharal asking if I wanted to do the MotoGP test at Buriram, Thailand as a replacement for Jonas Folger. I couldn’t believe it and it took me another three days to realize I was actually going to be riding a MotoGP bike.”

The Malaysian put on an impressive performance at his first meeting with the royal class and received a contract quite soon after, completing the Tech3 team. “I really thought I’d be struggling with a MotoGP motorcycle like that and that I’d be at least two or three seconds behind the rest. Instead, there was actually only quite a small difference with the fastest rider. After the first test, I was at 1.7 seconds and just before the season start I had already reduced the gap to 1.2 seconds.”

Hafizh Syahrin managed to surprise several times, achieving strong results. He appeared in the top ten four times and eventually collected 46 points. With that number of points, he was just four points short of claiming the ‘rookie of the year’ title. “It was especially unfortunate that I scored no points in Australia. That whole weekend went very well and I could fight for the top eight, but on Phillip Island it is also very easy to lose the front. Unfortunately that did happen, but those races really are the ones you learn from. Suddenly you’re riding with the top riders, and as a rookie you get a lot out of it.” 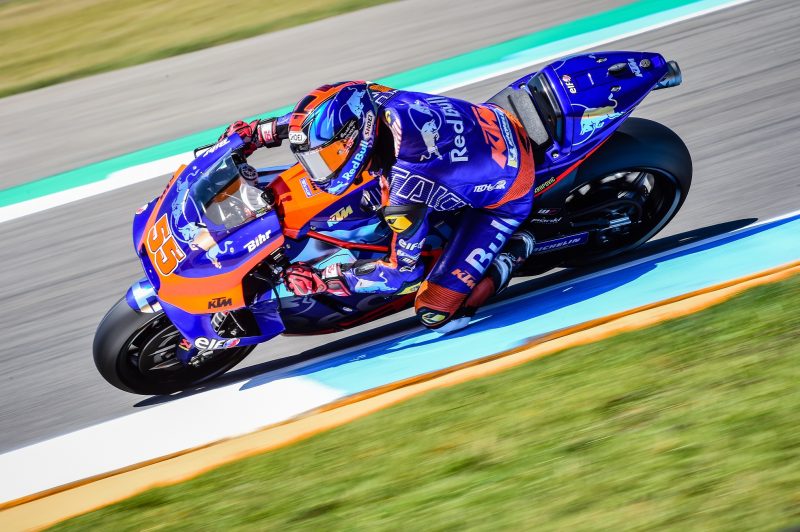 Unbelievable wildcard performance
Of course, there is a whole history behind Hafizh Syahrin Abdullah’s MotoGP™ story. The Malaysian rider did not have an easy childhood — he had divorced parents and lived in lots of different places. He lived with his grandmother and mother, but the young rider regularly stayed in his father’s workshop as well. Shafie Harun repaired and modified motorbikes and prepared racing engines for local riders. It was there that his love of fast motorbikes soon developed, and young Hafizh Syahrin often accompanied his father to the race circuits.

Shafie Harun had no choice but to spend his hard-earned money on a pocket bike for his son. “From there I moved up and up, and the machines became faster and faster. My father and I spent a lot of time working together, with the aim of getting as high up the ladder as possible. I dreamed of becoming a professional rider, but ending up in the MotoGP class was something we wouldn’t have dared to even think about. I am very grateful to my family for that, and to the sponsors who were always there for me.”

A key moment in his young road racing career came in 2012. A wildcard appearance at his beloved Sepang left the door to the Grand Prix wide open for Hafizh Syahrin Abdullah. Out of nowhere, an unknown Malaysian rider was suddenly fighting for the podium places in Moto2. On a soaking wet home circuit, he made his way forward and even managed to take the lead halfway through the race.

At the same time, he got his nickname El Pescao, Spanish for ‘the fish’. With a playful ease, he drove past established names. The podium turned out to be a bridge too far (in November 2013, Anthony West was removed from the results due to doping, causing Hafizh Syahrin to move up to 3rd place), but even 4th place was celebrated as a victory by his team. 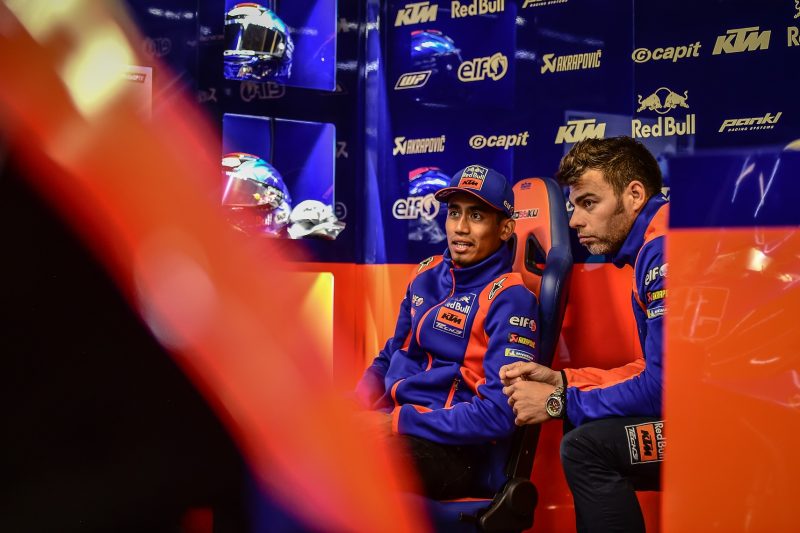 “The year before, I had also ridden a wildcard, but that really was the first time I had been on a Moto2 machine. To gain some more experience, I decided to go to Europe in 2012 so I could compete in the Spanish Championship. I understood that in order to become a professional rider, I had to survive outside of my own comfort zone. The race at Sepang was when I stood out for the first time and when people suddenly noticed that there was a good Malaysian rider in the paddock alongside Zulfahmi Khairuddin (KTM Moto3 rider at that time).”

The golden ticket that Hafizh Syahrin Abdullah held due to his incredible wildcard performance was to be finally exchanged for a permanent seat in the Moto2 class in 2014. From there, the Malaysian continued to grow and eventually became a fixture in the intermediate class. He made two appearances on the podium in 2017, and the following year he aimed to go a step further in Moto2. But to his great surprise, that opportunity did not materialize. A call from Tech3 owner Hervé Poncharal changed everything. 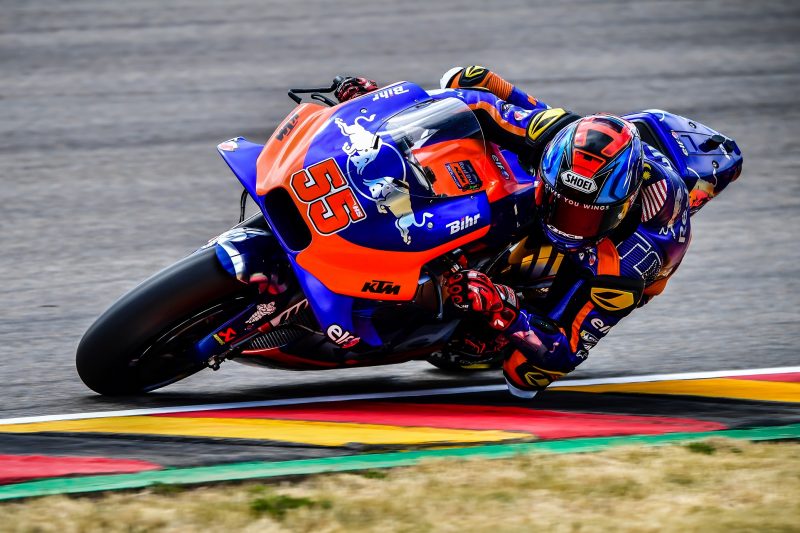 A little boy’s dream
Although his second MotoGP™ year isn’t going well so far, the 25-year-old Malaysian expects to be able to take another step in the right direction. “These are difficult times, but I try to keep life as normal as possible. I just keep focusing on the next race, and I’m noticing that the gap is getting smaller and smaller. My times keep improving, so hopefully I’ll be back in the points soon.”

Hafizh Syahrin Abdullah knows better than anyone that every MotoGP™ rider has to score good points to keep their place. Despite adversity, he is looking forward to the future. His positive attitude stems from pride. “Motorsports are rapidly growing across Asian countries, and that’s reflected in ticket sales. Take the Malaysian Grand Prix, for example, which is almost sold out. People come to see me, as I’m ‘their’ MotoGP rider. It’s a little boy’s dream, when you actually manage to get into that class. That’s the reality for me now and it makes me so proud. I’m the first rider from Malaysia to ride in the class alongside the likes of Valentino Rossi and Jorge Lorenzo, my childhood idols. At the end of the day, I have a lot to be happy about.”

The Red Bull KTM Tech3 rider is hoping to represent his country in the MotoGP™ paddock for some time to come. “Of course, I can’t predict the future, but it would be nice if I could be succeeded by another Malaysian. When I finally stop racing, I hope to be able to continue in motorsports. If I get the opportunity, I’d like to help young riders. By mentoring them and helping them grow up in the World Championship, for example. It’s important that someone gives them a chance, like the one I had. When I was still driving in Malaysia, I didn’t have many opportunities to go to Europe, let alone to end up in the Grand Prix paddock. But I got there, and I’m even on the grid of the MotoGP class. So, anything is possible.” 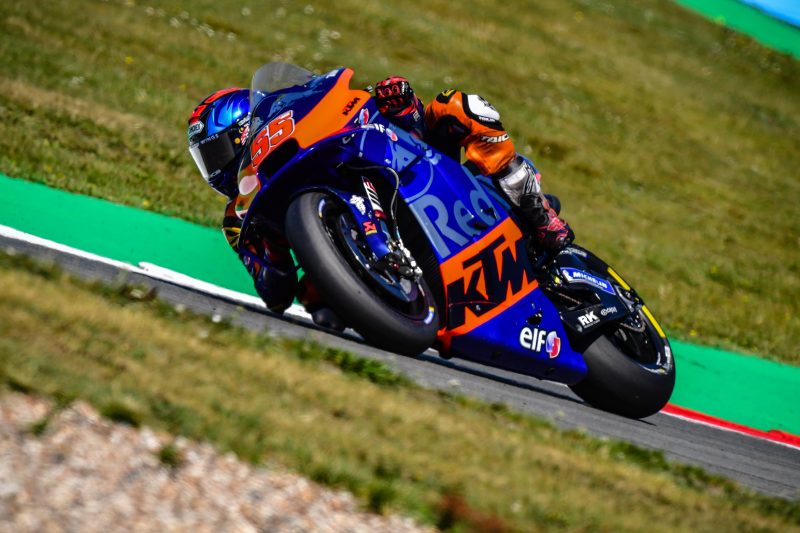 116 Responses to STAYING POSITIVE IN THE MIDST OF ADVERSITY: HAFIZH SYAHRIN INTERVIEW