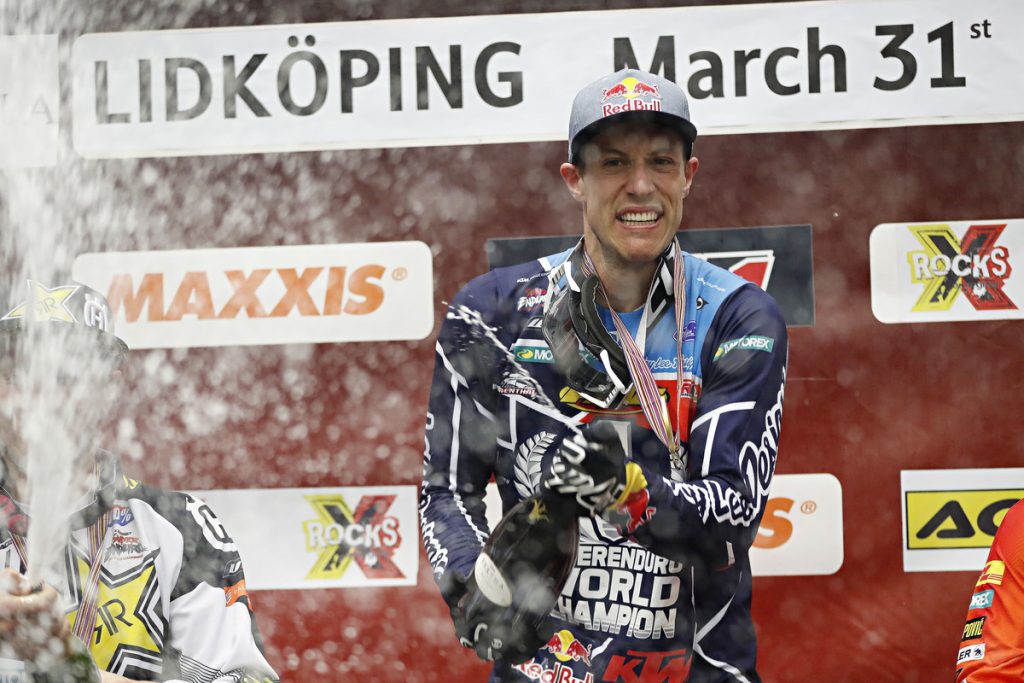 The 2018 FIM SuperEnduro World Championship title fight was unquestionably a memorable one – a titanic duel between Cody Webb and Taddy Blazusiak. As reigning AMA EnduroCross champion Webb had momentum on his side and was determined to secure his debut world crown at the series finale in Sweden. 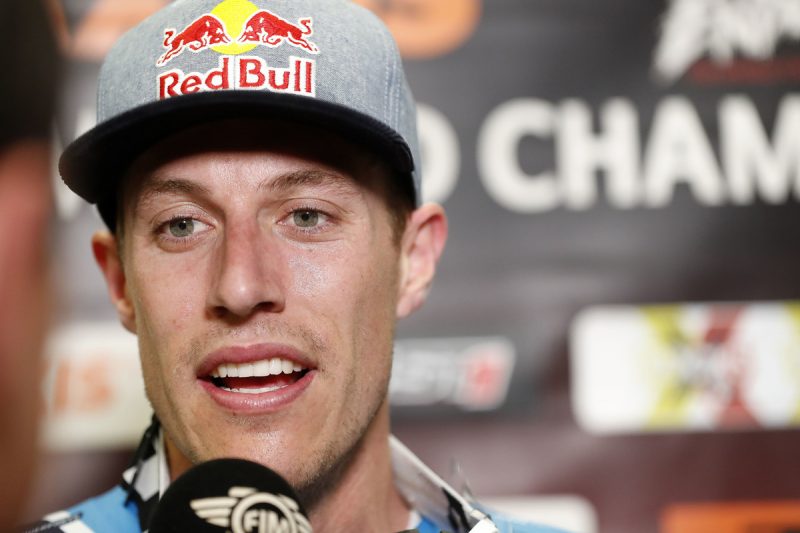 Entering the Lidköping Arena with a 17-point cushion over his nearest rival Blazusiak, Webb did exactly what was asked of him to maintain his lead in the title chase. And when Blazusiak exited race two early, the deal was sealed and Cody became champion. With the title celebrations in full swing, it was time to catch up with KTM’s newest world champion to find out about the epic season just gone while also looking forward to his next challenge — the World Enduro Super Series …

Congratulations Cody, becoming world champion is something you’ve worked towards for a while now, how does it feel to win the SuperEnduro World Championship?
“Winning the world championship is huge for me – it’s definitely my biggest title to date. This series has the best riders in the world, so to go up against them and beat them is an amazing feeling. We’ve been through a lot this year, we’ve had the highs and also the lows of racing, but overall I’ve been relatively consistent and never gave up without a fight. It’s certainly going to take a while for this victory to sink in but I’m going to enjoy the moment.” 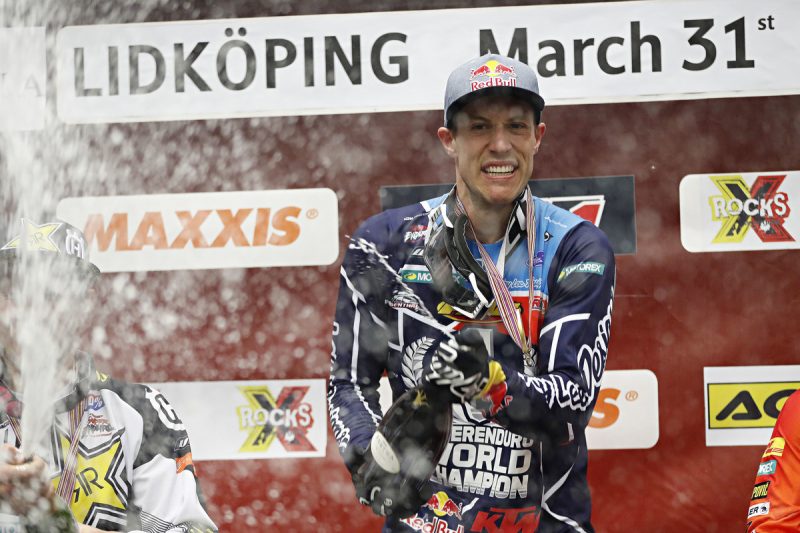 We’ve watched some incredible battles take shape between you and your closest rival Taddy Blazusiak, how have they been?
“I’ve got incredible respect for all these guys I’m racing but of course it’s special to go up against Taddy like that for the title fight – he’s the most decorated guy in our sport. He was my idol growing up and now here we are banging bars for a world championship. He came out of retirement for this series and he really gave it everything he had, so it is unfortunate for him to have the issues he had. At one stage momentum was on his side by winning the opening race, but I knew that with the 17-point cushion I had it would always give me a little bit more breathing room.”

Of course, this championship was not just about one race but instead a full season and throughout it all you’ve really shown incredible consistency, did that make the ultimate difference?
“It’s hard to use the word consistent for a sport like SuperEnduro because it’s just so unpredictable but it is a good way to describe my season. I was always pushing for wins and the top step of the podium. I crashed and made mistakes as much as everyone else but somehow managed to fight back each time. I won seven races this year too, that’s more than everyone else and I was also never far off a top three result when I couldn’t win so I think that did make the difference in the end.” 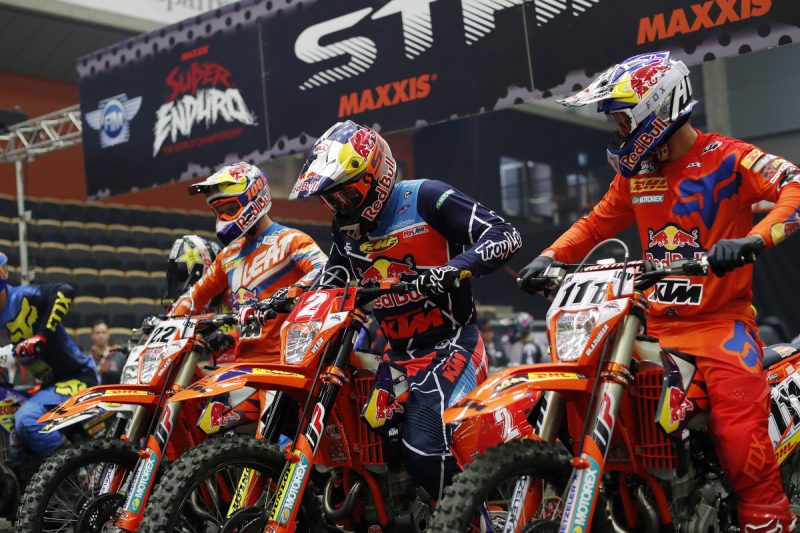 After a year’s absence from SuperEnduro having missed the 2017 campaign, was it important for you to return Europe?
“I was really motivated to come back to SuperEnduro having missed the 2017 season and made a big push to do so. Also, the AMA EnduroCross title in my back pocket was a big asset to have when renewing my contract and talking about a SuperEnduro return. So I guess with me making a big push, I think KTM also realized how much I wanted to be a part of it too and made it happen.”

Did coming in hot after winning the AMA EnduroCross title back in November add pressure to deliver in SuperEnduro?
“It definitely helped to come straight from winning that title because I had missed a full season of SuperEnduro racing. I was confident because EnduroCross was so good and at this level confidence is a huge part of the game – everyone is so talented that it can go any rider’s way on the night. I’d just won races indoors so that was definitely a big confidence boost to have starting out in Poland.” 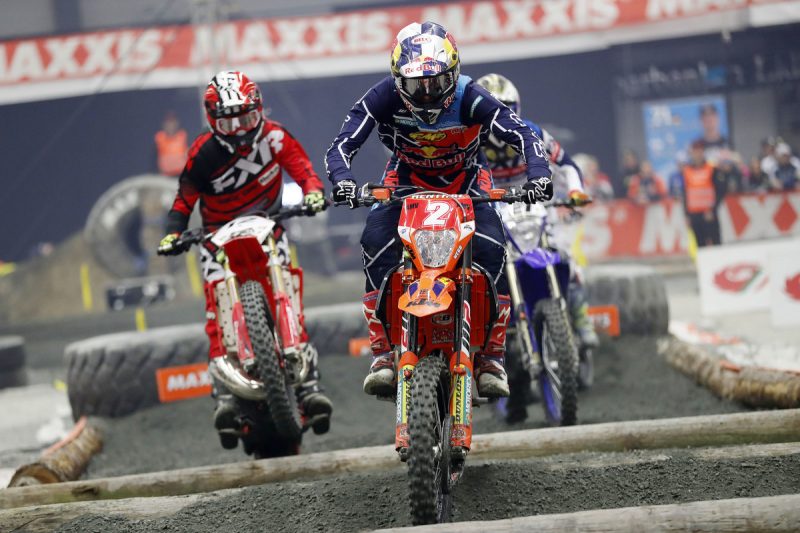 We’ve seen so much on-track action this year, is that because everyone is riding at the maximum limit?
“The high intensity short format creates way more action. I think that’s why the highlight reel after each race is so wild. There’s just so much more going on because you don’t have time to wait. Everyone wants to win so a lot of stuff can go bad really quick. The AMA EnduroCross series is more prolonged and stretched out for the main event. It’s nice sometimes because if you don’t have a good start then it’s possible to come from dead last and finish on the podium. With SuperEnduro it’s tough to do that in the six-minute time span. The top five or six guys are riding so good that it depends on the night who’s favor it swings in. The intensity does get super-sketchy and I always get arm pump no matter what. I feel like I can ride really good at 85 per cent lap after lap, but in SuperEnduro it’s all-out, it’s 100 per cent all of the time. We might only do about nine or 10 laps but come the final lap I can barely hold on or pull the clutch. It’s crazy how that extra 10 per cent can put you over the edge like that.”

Now as a champion of both the AMA and FIM series do you prefer the three-race format of SuperEnduro or the single main event of the AMA?
“It’s difficult to answer as both have their positives but I think from a spectator’s point of view the short three-race format has got to be more exciting. Shorter races have a higher intensity, so there’s always something going on and with three races you see the top riders on the track more frequently too. People like watching the amateurs race to see the loop outs, but really they come to watch the top guys. With higher intensity and more track time it’s more attractive and definitely a win-win – there’s more racing and passes because you’ve no time to waste. Fans love that stuff. The format is already crossing over into other sports too, even Supercross. They are trying out the Triple Crown Series this year – round one was new with complaints but second time out in Atlanta was a better response.” 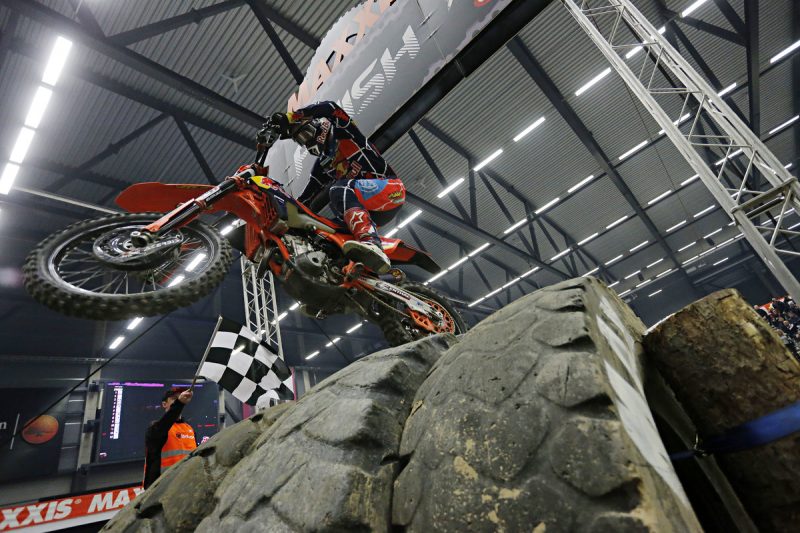 Looking forward and to the fast approaching World Enduro Super Series, are you ready for it?
“The whole idea of a mixed-discipline series is awesome but crazy at the same time. It’s like the Mayweather v McGregor fight, no-one knows who’s going to come out on top. We’ve Nathan Watson and Josep Garcia who are super-fast riders but are going to struggle at other races. Also, I’m not known for my moto skills and I know Graham Jarvis definitely isn’t either, so that’s going to be interesting to see how it pans out. But I’m excited about becoming that all-round better rider because of it. It’s an amazing opportunity to get chosen to race WESS and I’m keen to be a part of it. Red Bull Romaniacs, Extreme XL Lagares and Red Bull Knock Out are all events I’ve wanted to do. There’s a lot of travel involved, but I like racing dirt bikes and it’s my job, so it’s a win-win for me.”

Where do you see your strengths in the WESS series?
“I’m going to focus on the first two rounds – Extreme XL Lagares and Erzbergrodeo – as they will play to my strengths. The Hard Enduro races will be where my strengths lie. But I know I need to train on the faster stuff to improve my weaknesses too. I rode the ISDE last year because I wanted to be a part of it, but I also realized I’m also off the pace so it’s something to work on there. Classic Enduro is a whole different ball game. I’ll put an effort into going faster in sprinting to get my speed up, but I won’t do that every day simply because I enjoy the hard stuff of getting out riding and exploring.” 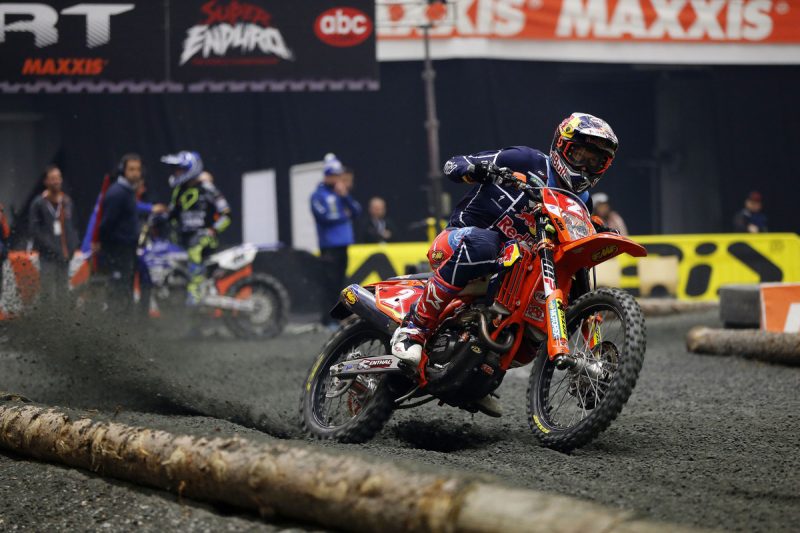 June’s Erzbergrodeo Red Bull Hare Scramble forms part of WESS and is a race you’ve had two podiums at now, is the top step of the box possible?
“Erzberg is huge for me. In 2016 I finished as runner-up to Graham Jarvis. It was my first podium there and also the first for an American too. Last year I was leading back and forth with Jonny Walker but I’m not sure what happened, I guess I just whimped out. I got so pumped up that I couldn’t pull the brake lever – it was like I imploded from the inside out. I let Graham by on one section and then let Wade Young by on a road section. I got to my mechanic at Karl´s Dinner and stopped. I had to take a time-out with him to try and destress because I knew I’d get hurt if I carried on the way I was. I got going again about seventh and I couldn’t see Wade in the gnarly bit in Karl’s Dinner. Somehow I found my flow again and at the finish had got back up to third but wanted more. I was happy with third but so frustrated with the middle of my race. This year the focus is on riding a mistake-free race – I don’t want to be upset knowing I could have done more.”

Finally, back home and what are people’s reaction to your success abroad in Hard Enduro and SuperEnduro?
“There’s definitely a good reaction, especially from my hometown people who saw me grow up riding trials with my dad wearing no gloves. I always go to my local KTM dealer for their Christmas party every year. They sold me my first bike when I was 19 years old so it’s cool just to hang and chat with everyone. Just recently I did a Bell Helmets ride day with Aaron Plessinger and so many people showed up just to ride with me. That takes me by surprise and puts into perspective what your results mean to others. It’s inspiring to me to see younger kids aspiring to be me because at the end of the day I’m just a dirt bike rider like them, I just happen to ride over rocks quite good.” 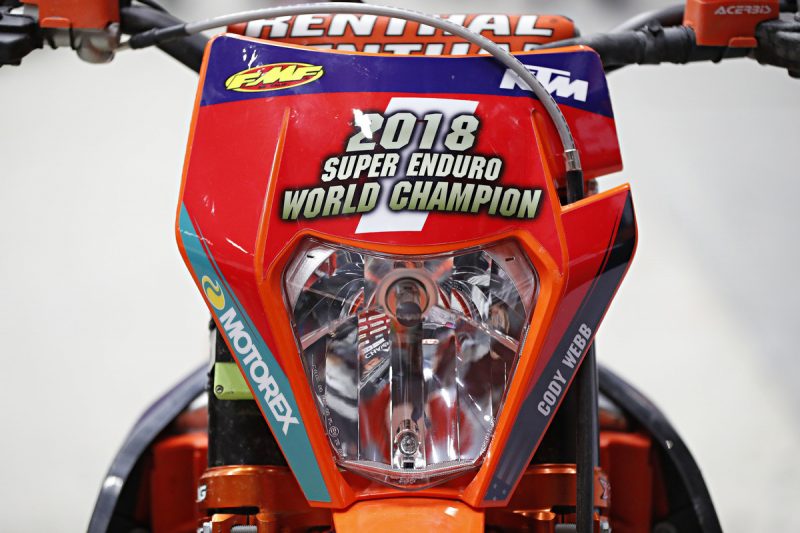