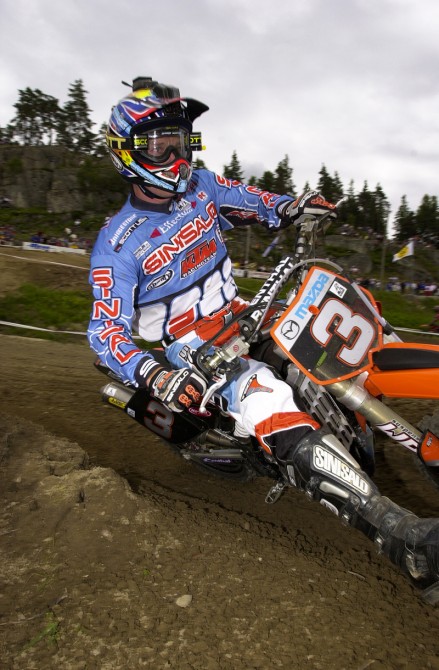 Sweden has been waiting patiently for a motocross rider to reach the same level of popularity and success of Peter Johansson. The former 500cc Grand Prix star finished third and second in the FIM World Championship and picked up nine victories from almost 180 Grand Prix appearances that lasted from 1986 to the turn of the century.

The 46 year old called it quits in 2001 and since then has been a KTM ambassador as much as an important sales figure in Scandinavia. We here at the Blog checked in with the friendly ex-pro to see what he had been up to…

So, nearly fifteen years as rider and employee of KTM so how does it feel to still have such strong links?

It feels really good. I started racing for KTM in 1999 on a factory bike and continued on the 500 until 2001. I was quite old by then! So KTM offered me a chance to work with them here in Sweden and I was really looking forward to it. We were just four people in KTM Sweden at the time and we managed to sell 600 bikes; we were really small. We took over Denmark and then Norway operations and got bigger and now the total is 3000 bikes so progress has been good.

What is your job day-to-day?
I’m the sales boss for all three countries and I also have a say in motorsports. I go to see all the KTM dealers and also meetings in the Swedish motocross, enduro and hill climbs. It is quite busy!

How was the transition from being a rider to doing that job? Did you have to learn much or was most of it down to contacts and being good with people?
For the sales it helps when you have a good relationship with the dealer. I was quite well known in Sweden so it was a bit easier for me to find good, new dealers. I could walk in the door and luckily people would know me, so I had shortcut for that part of the business and I still do to this day. I’m not that good with computers and so on but I know the people in the bike world in Sweden. It is working well.

It is a bit sad for Swedish motocross that you are still the country’s last GP star. However your fame, like you say, must have cut a few barriers…
Yes, and I think especially with new dealers. If I said something about a motocross bike then they were more inclined to believe me because I have been in that industry and world for such a long time.

How is the connection with Mattighofen? Do you visit the factory much?
I talk to Mr Pierer when I’m there and when the world was like this [shows hand upside down] in ‘08 I was there quite a lot. Now only a few times a year to Austria and sometimes our sales boss, Florian Kecht, comes up to see us. I really feel it is one of the best bike companies to work for because they really like to push; in that respect it is like the sport on the track, there is that will to win and succeed.

KTM are gaining market share and increasing sales. There are now more models to offer the dealers and the public. Has that changed the parameters for you professionally?
For sure. Due to the model range we ‘own’ off-road, more or less. In enduro we have something like 84% together with Husaberg and in motocross the number is also big. On the street side we’ve started small but in 2012 we rose to be the third biggest. It went: Honda, Yamaha and then KTM, so we’re before BWM, before Harley Davidson and also Kawasaki and Suzuki so we are really pleased about that. We’ve found that the streetbike dealers love KTM because there are new products coming up all the time and they are nice-looking, cool-looking with great power.

Do you indulge in some riding yourself these days?
No! Only a couple of times a year with a bit of enduro. Last year was the first time when I thought ‘I don’t have ‘it’ anymore’! After ten years without really riding or training with the bike it was like I was lost! On the road I ride the 1190 Adventure and when the weather is good I visit the dealers with this bike. They appreciate that the sales guy is using the bike also.

Sweden must be a special country for touring and just taking the bike on the open roads…
If you could compare Sweden to the rest of the world then I have to say that here we have some perfect roads for bikes. We don’t have that much traffic either. It is difficult to find a better place I think.