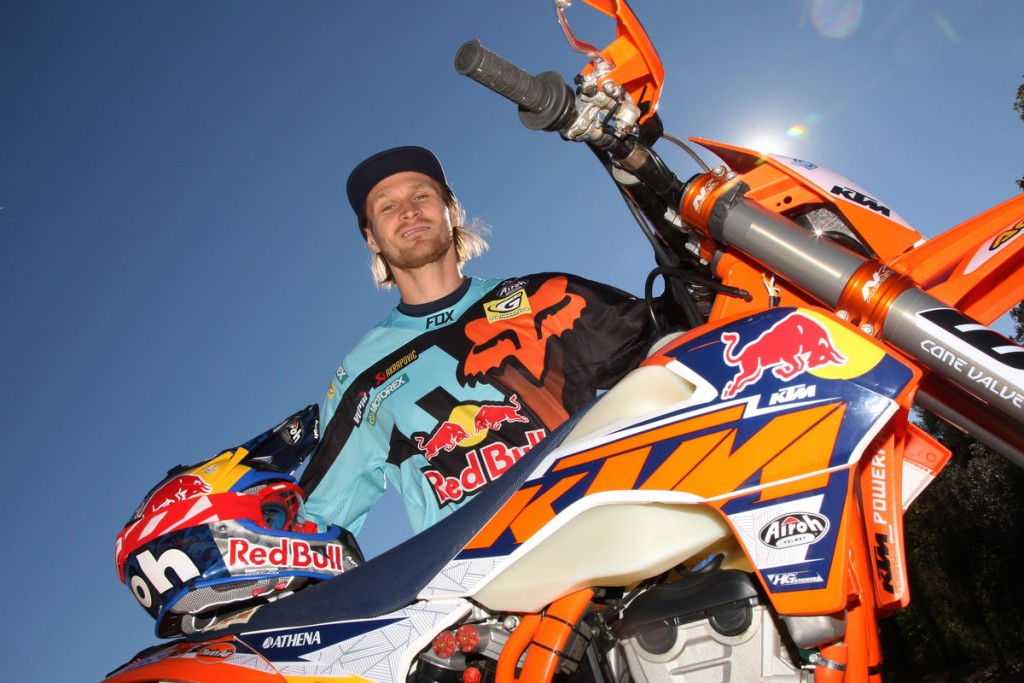 Taddy Blazusiak is a man on a mission. The ultra-successful Enduro-ace has had a tough time in the last 12 months, but he’s finally back on track. Blazusiak joined the recent KTM Enduro Launch last week, where a new generation of bikes was unveiled, so we caught up with him on the good, the bad and the new bikes!

“Yes I’m doing good. It’s been a tough year; being ill, working hard to get back to SuperEnduro at the beginning of the 2016, then picking up that thumb injury, which was another setback,” said Taddy when asked about how things are. “It’s been a difficult few months, but we’re going to bounce back, as I’m feeling really comfortable on the bike and I’m super motivated. I’m ready for Erzberg and I’m looking forward to getting racing,” continued the Polish racer. 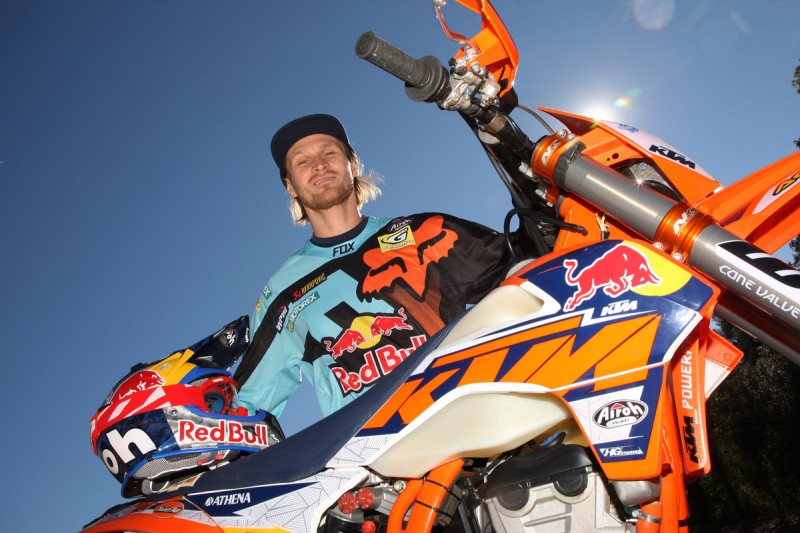 After contracting the notorious Epstein Barr virus, Taddy was ruled out of competition for the second half of last year. The KTM racer made a good recovery, but severed the end of his thumb in a crash after months of training in his recovery. It was a disappointing setback.

“What happened was just one of those weird super slow-mo crashes. I was just warming up riding a SuperEnduro track and my front end washed out, and I went down. I landed with my hand on the handlebars on the edge of my knee brace, and it cut the fingertip of my thumb off. It broke the bone off and it was incredibly painful. It was very frustrating to be honest, as I had just started to feel better after so much work and starting to feel good after last year. I was still having a bit of arm pump and stuff, which we knew would happen with so long off, but I was just getting into the groove, feeling better on the bike, and then this thing … boom! Another surgery, another setback.”

“It was pretty bad. I gave it a go and tried to race in Argentina, but there was no way. I couldn’t hold on, so we had to call it because I could have been a danger to myself or the other guys. It’s been a lot of bad luck, but then I also think those things happen with preparation and riding at your best and your reactions. The last race I did a backmarker fell and disconnected my fuel hose when I was going for the overall in Spain at the last round, which I guess was just bad luck. I’ve had a good run the last 10 years, and a bad year just makes me hungry to come back and show those boys how it’s done.” 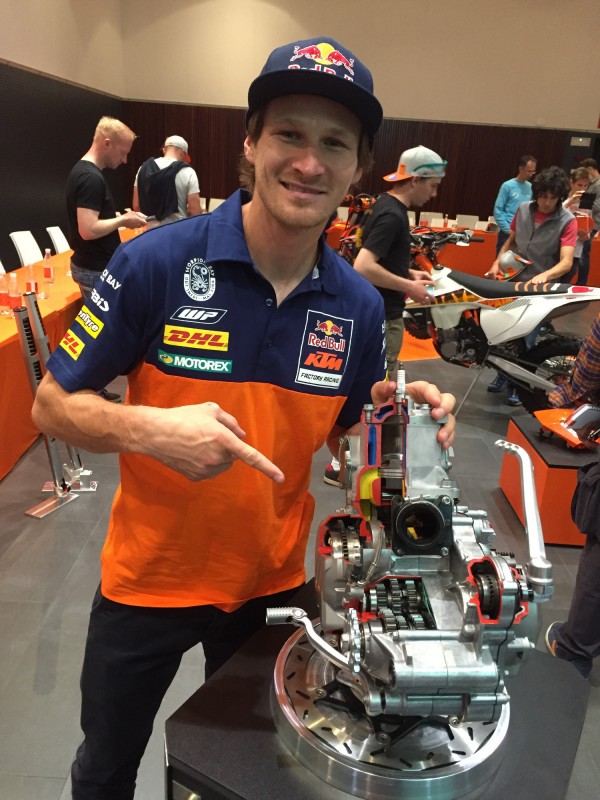 But Taddy is back. He’s fit. He’s ready. And at the Enduro Launch in Spain, where KTM revealed an entire new generation of bikes including a full line-up of 2-strokes and 4-strokes, it was awesome to for the KTM BLOG to see Taddy in action on every bike from the 125 XC-W to the 500 EXC-F.

“I’ll be racing the new EXC at Erzberg and I can’t wait. I’ve been at the launch and I was like a little kid. I’ve been racing bikes my whole life, but still when there’s something new I’m just like that little kid so many years ago. I’ve ridden the whole range and it’s crazy to see, I’ve been on the team almost 10 years now and we’ve changed the model a few times, so it’s cool to see how much the bike improves every single time. The new bike feels so much better, corners better, the weight distribution is better and it’s all over a better bike. I can definitely see that the guys behind it are working hard and going in the right direction. From the 125 XC-W to the 500 EXC-F they are all better.”

We saw that Taddy was ripping round on a few of the different models, but when pressed he couldn’t really say which of the brand new generation of KTM Enduro bikes, which have 90% new parts and have been redesigned from the ground up, that he likes best.

“It’s a tough question depending on what kind of thing you’re riding. I have to say I’m really surprised by the 500 EXC-F. It was really good; it was really powerful but really easy to ride. On the 2-stroke range both the 250 and 300 EXC were awesome and the smaller bikes were a lot of fun.”

“I have fun whatever I’m riding, on the first go I rode the 500 EXC-F, and then straight onto the 150 XC-W. It was a big step, but you change your riding style and they’re so much fun to ride.” 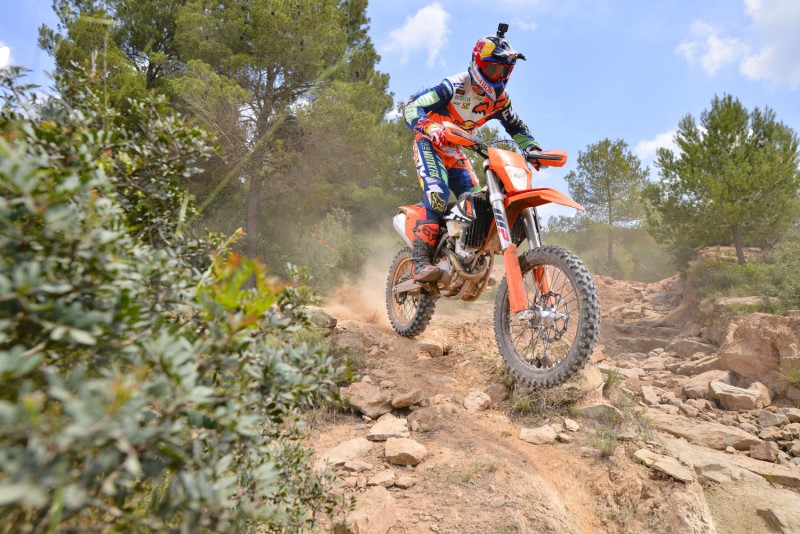 The next big event is the Erzbergrodeo Red Bull Hare Scramble and Taddy will line-up for the first time on a new EXC. The Red Bull KTM Factory Racing Team received the pre-production bikes a few weeks ago, and will be testing as this BLOG is uploaded! Taddy says the set-up is already fixed, with just some minor tweaks to get it ready for one of the toughest, maddest and baddest events on the Hard Enduro calendar. After such a difficult time we wonder if Taddy has a point to prove. We know Jonny Walker won’t be racing (due to injury), which sure is a disappointment to the fans, but it won’t be easy for Taddy with the likes of Alfredo Gomez and Graham Jarvis to compete against.

“I never really think of setting myself goals in terms of results. I am going to go out there, push as hard as I can and see what we can get. The Hard Enduro was not really my thing for the last couple of years, so it’s hard to say I’m going to win when those boys are racing this kind of stuff regularly. I’ll just go out there to have fun and push as much as I can to see where I’m at.”

“I was looking forward to racing Jonny, he’s one of those few guys that sees racing the way I do. It’s about getting off the gate, getting a good start and then just pinning it. It’s racing, I’ve been injured, he’s injured but I hope we get a good race before I get really old!”