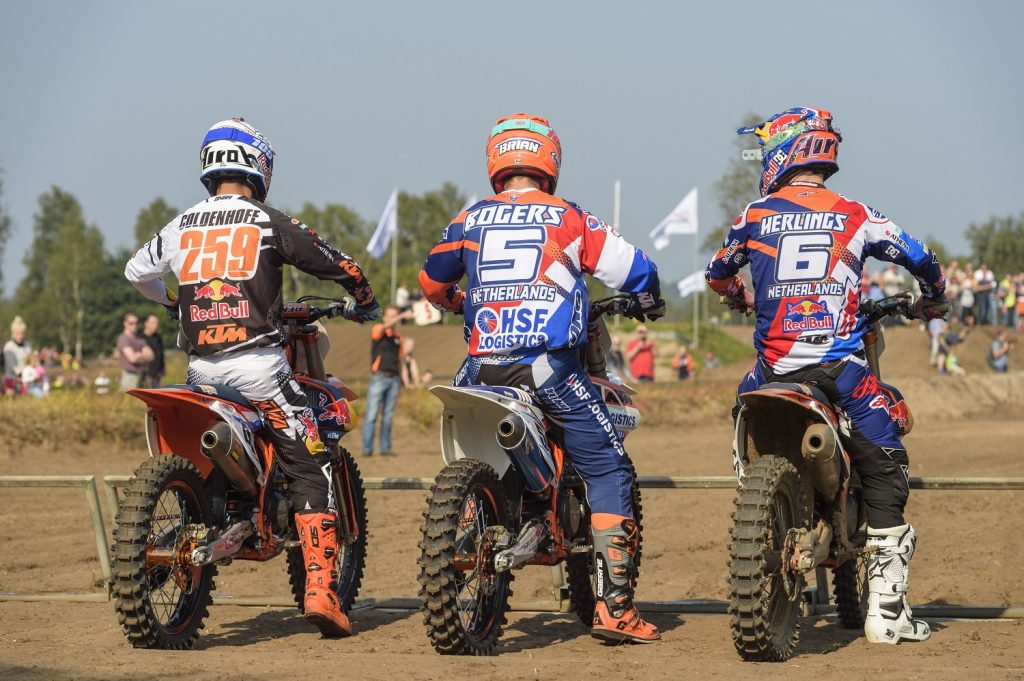 Last year they came as close as the Dutch team has ever gotten to writing history in winning the Motocross of Nations. Jeffrey Herlings, Glenn Coldenhoff, and Brian Bogers missed out by just a single point on that Sunday in September. France won with the narrowest of margins, beating the Netherlands 30 to 29. So this will be their next shot at taking home the biggest trophy in probably the most prestigious MX race of the year, on the challenging course of Matterley Basin. Obviously, the Dutch would run in orange, but these guys are just that little bit extra orange since they’re all on KTM machinery. 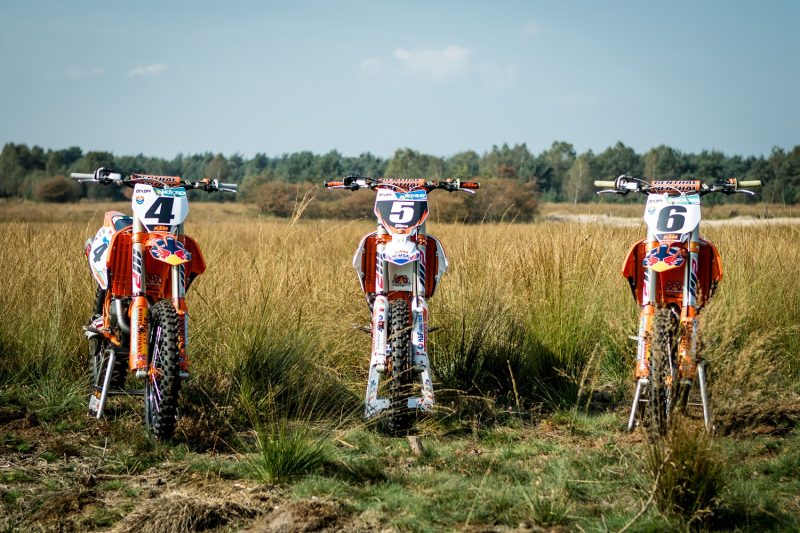 One thing is for certain; these guys are eager beyond measure. You would expect nothing less, losing out by just one point in the previous running of the race. Close enough to taste the winners’ champagne, only to miss out by a whisker. A week before the fence drops in Britain, Dutch motocross fans came to Motorsportpark Gelderland Midden to send them off. Mere minutes away from the beautiful De Hoge Veluwe national park Herlings, Coldenhoff, and Bogers came to show what they are made of. After a few demo laps round we sat them down to ask them just how they see their odds against some of the strongest national teams from all over the globe. And since Herlings’ has had an astonishing first season in MXGP, we’ll ask him a couple extra questions, too. 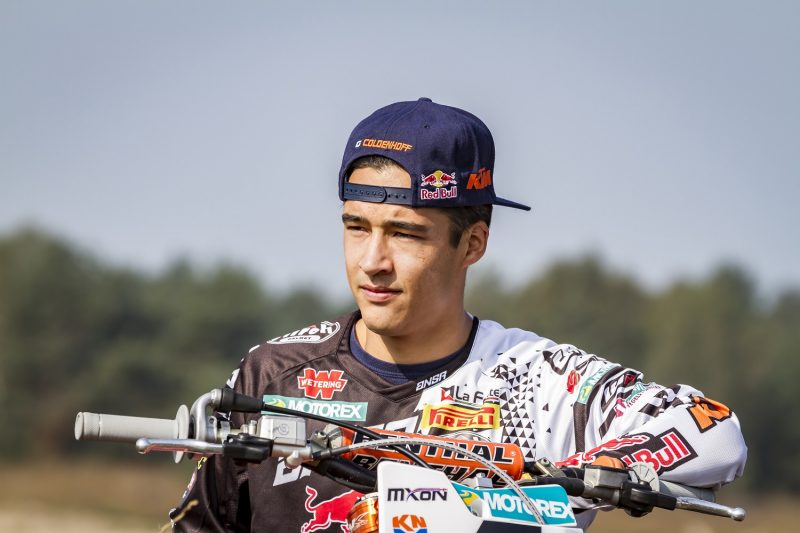 Last year lost – only just – to France, granting them their third win in a row. Do you reckon they are the team to beat once more?
“In the end the best will always end up on top, and this year will be no different. Think France, the US, Belgium, but you should not rule out Switzerland and Great Britain; they have managed to sort themselves out great teams as well. To me, France is the country to beat, though they are not unbeatable. And they have injured on and off, so they have drafted a strong Enduro rider to substitute. Christophe Charlier has his roots in motocross, so do not expect them to be weakened much by it. Fact remains he is a draftee, and probably not France’s best MX2 rider. That could potentially help other countries score some points.”

What do you think the Netherlands can do?
“Just like last year, we are sending the big guns to the Nations, that’s a given. I feel like we could win, but with an event like this anything can happen. It is important to be on it from the get go and to put in good results as well. Jeffrey is in the shape of his life and Brian seems to be feeling good, too. I am the only rider who is a bit off center right now, and being slightly injured, I feel riding is not exactly going the way I want it to right now. But, we do have another week left, so I think I can regain full fitness before the MX of Nations starts. Plus, I have a score to settle, with disappointing results in my last two GP’s. I feel there is something left to do, and I am taking that with me as a motivation. If there is one thing I do not want, it is going into the winter period with poor results. That just would not feel right.” What makes Motocross of Nations so unique as an event?
“To me it kind of feels like the Olympic Games of motocross. It is a special feeling to represent your country. Last year I was astounded to see so many Dutchmen in Maggiora. It is a beautiful sight to see, especially since we made in onto the rostrum. From what I have heard, we will be seeing quite a few fellow Dutchmen at Matterley Basin. That is what makes the event that bit better than anything else.”

The Netherlands have never won the Nations. Do you think you can change that?
“Is that so, huh? I did not even know that. Anyway, I have a good feeling about this year. The podium is the goal, but anything is possible. It will come down to the line, but I do not see why Holland could not come out on top.” 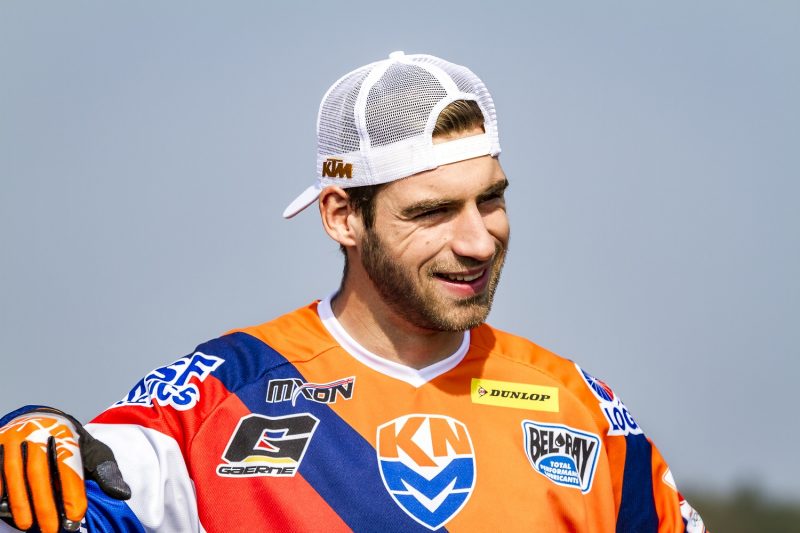 Do you feel extra pressure, as you came in second last year?
“No, not really. I am actually really looking forward to it, as we are all in the same team together. We have proven we can run with the big boys, and I think we still can. And we have also learned a lot from last year, and with a little bit of luck, we could win this. I mean, we will still have to go and do it; a crash could mess it all up in no time at all.”

MX2 riders are expected to round off their heats in quick succession; does that require special preparation?
“Well, it obviously differs from a GP. I have training with shorter intervals between heats. When the flag drops in race one we have one hour to prepare for race two. Time flies by and in the meantime you have to think of things like refueling. We have been looking into our diets as well, because you have to make sure you get something in your system in between races. But then it cannot be too much, or it will bite back in race two. That is something I have definitely taken away from last year. I feel fit; better than I have felt all year. That really boosts your confidence for the Nations.” 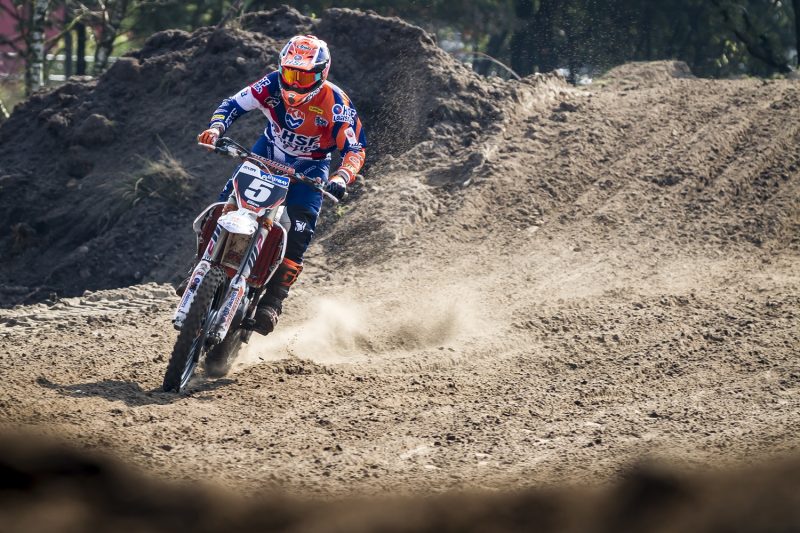 What else did you learn in last year’s MX of Nations going forward to this year?
“Last year I got stuck behind an MX1 rider I could not seem to pass. I knew I was quicker, but he could just make up by putting the power on. Then I crashed because I was tirelessly trying to pass him at every single corner. So I have learned to adapt my tactics in that sort of a situation, I have learned to keep calm, and to focus on finding that one spot where I can make a successful pass. Crashing out could really harm us in the standings. Considering I am on an MX2 bike, it is important to get my start just right, so I do not stuck behind those pesky 450 riders I somehow have to pass.”

You say a podium finish would be good enough, but what if you come home in third? Wouldn’t that be a massive disappointment after last year’s second place?
“I guess so, but you have to take in account how things come to be. In certain conditions a third place finish would feel like an all-out victory. And do not forget, Holland is tiny. If we manage to come in third, we should really be proud of that. But then we are motocross racers, so we will always want to get the best result possible. In the end the win is what we are going for, and I think we should be able to!” 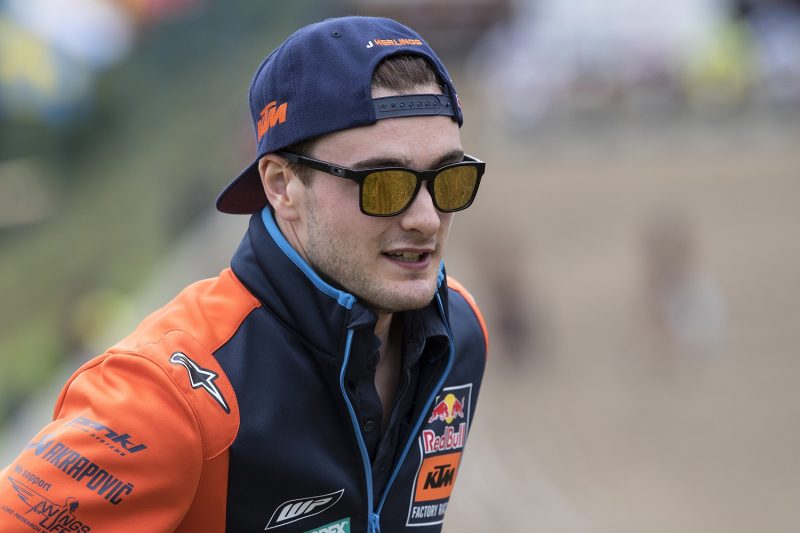 Firstly, your 2017 season, how do you look back at those last few months?
“Yeah, we got off to a bad start and it was never realistic to do those first two races. I could sit on the bike, but not much more than that. After four GPs I was pretty much out of contention for the world championship. It really takes a toll on you mentally if you cannot get the results you want race after race. Riding around sluggishly in fifteenth is hard to swallow. That is when you start doubting, yourself; everything. My injury did not heal all too well either, and then there is the busy schedule and the traveling. Only when we got back to Europe I could really focus on training and riding without being in pain.”

And then things changed.
“From that moment it went well fast, taking my first podium at Valkenswaard. After that I only missed out on the podium three or four times, so I feel like I gave it my all.”

A quick calculation, you managed to bring home 59 points in your first four GPs. The final four you took 164. That pretty much sums up your season.
“If I had managed to score those one hundred extra point at the beginning of the season, I would have been world champion now. But that is not the case, and you should not dwell in the past. I am focused on next year, when we all go back to square one.”

How do you feel going into the winter? Is it feeling bad about losing out of the title or winning six GPs?
“If I had started the season without injury, I could have gone for the title, but I started out 3-0 behind, and that is when I knew it is going to be hard. I managed to set a thing or two straight, but in the end that does not count. The only thing that counts is the world title. So I am focused on having won those six GPs, I am taking that good feeling into the winter. Getting some rest, recharging. After that the mayhem of last season is gone, and we get to start all over again!” 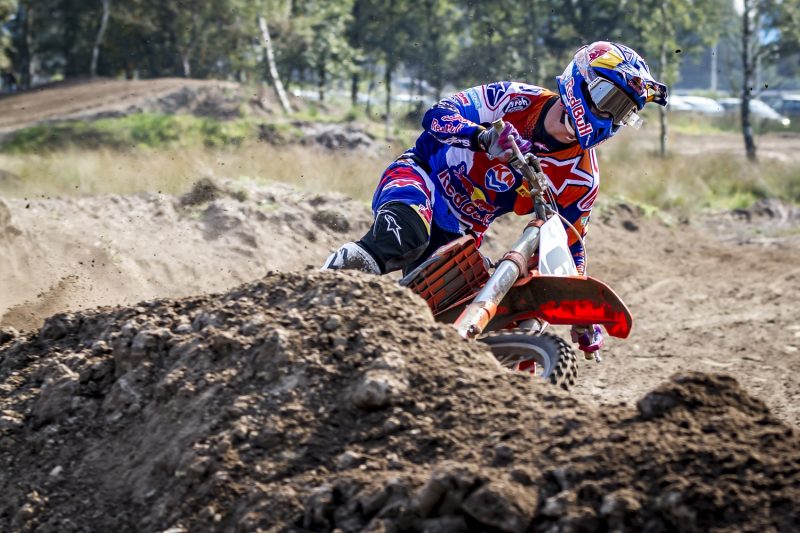 What was the defining moment of your season?
“That had to be my victory in the AMA National at Ironman. That weekend I was fastest. I won both heats. My first MXGP was something special too, as I was winning at Assen. But Ironman was just that little bit more special. I had planned going there a couple of years ago but then I broke my femur two weeks prior. This time I had nothing to lose, so I was free to go, and to have such amazing success; that is just awesome.”

Your season ends with the Nations. Is it hard to get pumped for the next race now?
“No, not really. I feel like I still have not made right all the wrongs of the beginning of this season, so I have a score to settle. I am in perfect fitness, but above all I am just really looking forward to it. To me it is one of the biggest races of the year, so I am definitely going for the win.”

Last year the Dutch team got second place. Does that ever come to mind, how you almost made history?
“No-one was to blame we did not come in first. The three of us gave their all, and lost unfortunately. Of course, it sucks, coming so close. I had rather lost by ten points, because a tiny deficit like this really quite stings. More so when you consider the Netherlands have never won this thing. Fortunately, we have got a strong team and certain countries are dealing with injury. Sure, it is never a good thing, but it could be for us. Anything is possible, but then we still have to do it.”

The first Motocross of Nations was on Dutch soil and Great Britain managed to win that, will we see a reverse scenario this year?
“Honestly I do not give a damn where it happens, as long as the Netherlands wins, even if it is just once. And when Holland does win, I would very much like to be a part of the team.”

The Motocross of Nations will be streamed live on www.mxgp.com. The first race is scheduled to start on Sunday October 1. The fence will drop for the first time at 1.10 pm (MXGP and MX2). 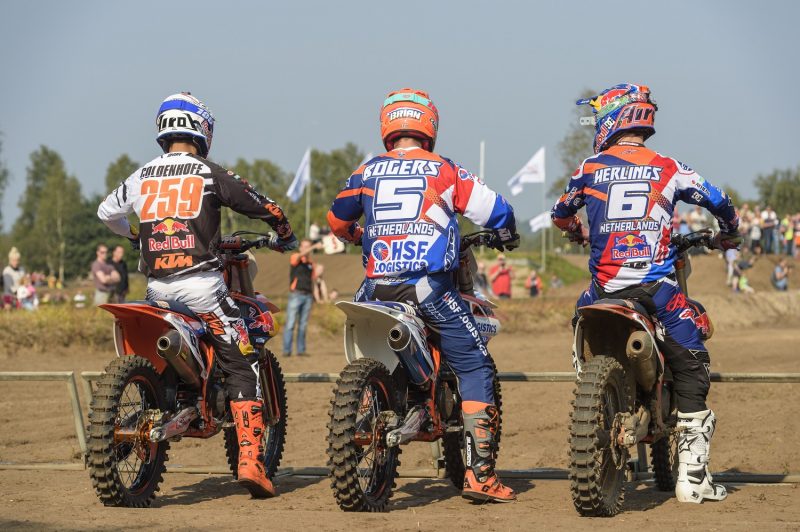