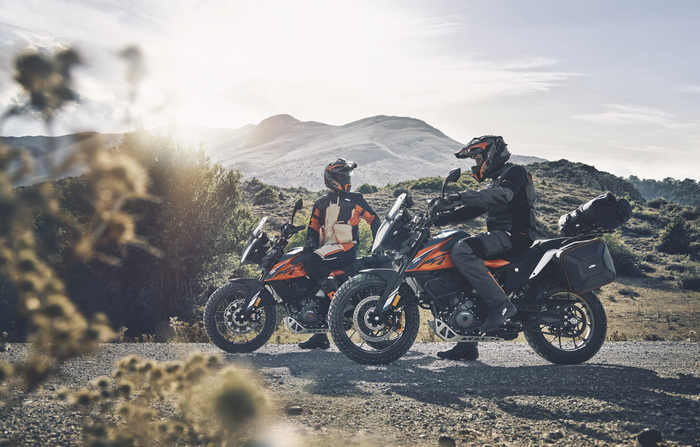 A WEEKEND ADVENTURE IN THE GREEK MOUNTAINS

Can a smaller displacement ADVENTURE bike be fun? That’s exactly the question we set off to answer with Quinn Cody riding the new KTM 390 ADVENTURE for a long weekend in the Greek wilderness.

Sometimes handling a big bike can be a bit of a handful. The added weight or horsepower make my personal KTM 1190 ADVENTURE or the KTM 890 ADVENTURE I’ve been riding for the last year way better in covering long distances fast. But when it comes to having pure fun in narrow mountain gravel roads, the new KTM 390 ADVENTURE has been a very pleasant surprise.

As much as I like the power of the big orange machines, I will admit that things could easily get out of hand, especially in long days or tricky offroad conditions. The weight sometimes makes pushing your limits on a +200 kg bike tricky. For the launch of the new KTM 390 ADVENTURE, myself and offroad legend Quinn Cody were invited to act as main riders in the official launch video.

The idea was simple; we would pick up two bikes from Athens, Greece with the goal to ride them through the Greek mountains as we were heading to the basecamp of the European KTM ADVENTURE RALLY. It took us three days to get there and we rode almost 500 km overall in three days.

I’ve already been spending time on the Greek land, and I knew what great riding opportunities it offered, especially on a lighter and more versatile adventure bike like the KTM 390 ADVENTURE. For this three-day adventure, I had one of my motorcycling heroes, Quinn Cody, riding alongside me and allowing me to learn from him.

Quinn comes from a long streak of impressive achievements in motorsport, such as participating at the Red Bull Romaniacs on a KTM 1090 ADVENTURE, getting a top-10 at the Dakar Rally and winning the Baja 1000 Rally four times.

Our riding skills were clearly unmatched, but our machines set us on a whole new common ground. He was obviously a much more experienced offroad rider, but I did have broader wisdom in terms of Greek road navigation, as this was his first time in the country. As I’ve ridden the previous version of the KTM 390 ADVENTURE, I immediately felt at home on the updated motorcycle in terms of power or handling. My only focus was to think about all the cool places that we could have explored together.

The new model presented an exquisite color scheme, that in my opinion makes it resemble the stunning KTM 1290 SUPER DUKE R. In terms of electronics and engine, there’s a new setting that allows the OFFROAD TC to remain activated in the event of a brief stall or crash.

We met with Quinn in Athens and picked up two brand new KTM 390 ADVENTURE bikes from KTM Greece. After a quick initial briefing with the staff, we suited up in the latest spanking new KTM PowerWear and hit the road heading towards the mountains. Greece offers an incredible multitude of trails and an immense variety of terrains, which are easy to navigate for me… now.

There’s always an element of unpredictability when riding on Greek roads. But, unlike other countries who present restrictions in terms of riding possibilities, Greece has no limitations in where a motorcyclist is allowed to go. Indeed, it is one of the last remaining “free-riding” paradises in Europe.

The first off-road section was easy and smooth. Narrow but fast gravel roads, right on the edge of the small mountains surrounding the capital. My fully loaded KTM 390 ADVENTURE performed excellently, even riding at high paces. The suspension was surprisingly great even for a big heavy guy like myself.

The riding position while standing up is aggressive and ideal for off-roading situations, but still comfortable enough to be handled with ease. After roughly 90 dusty kilometers, we arrived in the beautiful coastal town of Loutraki, just a few km away from the Corinth Canal. As we started our day rather late, we decided to kick our boots off and wait for the sun to disappear on the horizon.

Nothing is more gratifying than stopping on the side of the road, along the beach, and having a cold drink, at the end of a hot riding day. As nice and comfortable as a hotel can be, nothing compares to sleeping in nature. For this reason, I decided to take my newly acquired friend to one of the most beautiful lakes I knew around and spend our next night wild camping.

The following day, as we started riding early in the morning, I took Quinn through some further but more interesting parts of the peninsula. This meant hitting the highway for a bit and riding straight up a famous ski resort in the Peloponnese region. Even on the highway, the KTM 390 ADVENTURE behaved excellently; it sits smoothly at 110 km/h and has a comfortable riding position while seated.

The best part was clearly the staggeringly low fuel consumption that the engine delivered, averaging an impressive 3.5 liters for every 100 km. Once off the highway, we began climbing up one face of the 2,400 meters peak, via a beautifully paved road. Riding the 390 ADVENTURE up these smooth roads was simply a pleasure. Its maneuverability in the sharp and narrow corners was probably the best in all the Adventure segment.

The adjustable WP suspension and grippy Continental TKC 70 tires, make the 390 one of the best machines out there in terms of riding versatility. Once we reached the beautiful mountain town of Trikala, we started hitting the dirt again. It was hard to keep up with Quinn, but riding the KTM 390 ADVENTURE and not having to deal with a much heavier and powerful bike, gave me the confidence to push a bit harder, and keep up with his pace.

After climbing and descending through a tricky alpine forest section, we finally reached Lake Doxa, where I planned for us to spend the night. The lake had a beautiful grassy shore where we pitched our swags and lit a small fire. It was great to chat with a legend like Quinn and share stories about adventure riding.

The night was peaceful. In the morning a group of horses and dogs greeted us for breakfast and kept us company while we packed our tents. We rode up to a mountain top, just behind the beautiful town of Kalavryta. As I was saving the best for last, I also wanted to “entertain” my guest with some proper Enduro terrains.

I knew about a steep hill climb where momentum and throttle control were fundamental for the completion of the ride up. I took him there and asked him, obviously, to go first. With a staggering calm and nonchalance, Quinn disabled his Traction Control, stood up on his pegs and took off like a rocket, climbing the hill in one go. Seeing him controlling the bike with such ease and climbing the long uphill like a steinbok, gave me the courage to give it a try.

It was clearly out of my comfort zone to ride up such a steep and rocky hill, but having the KTM 390 ADVENTURE under me gave more confidence in the sense that, if something could have gone wrong, I would have been able to handle the situation. As I correctly foresaw, it took me three attempts to finally ride up that hill.

As we rode off to the highway heading to the ADVENTURE RALLY basecamp in Nafpaktos, I took time to dry off my sweat and appreciate how easy it was to ride this machine. Being so light and maneuverable, it allowed me to easily compensate for the small skill gap that I had allowing me to keep up with a more experienced Dakar rider.

It was a great honor for me tour guide for such a great rider and person as Quinn. Once again, Greece and the KTM 390 ADVENTURE did not disappoint.

Check out the video here: