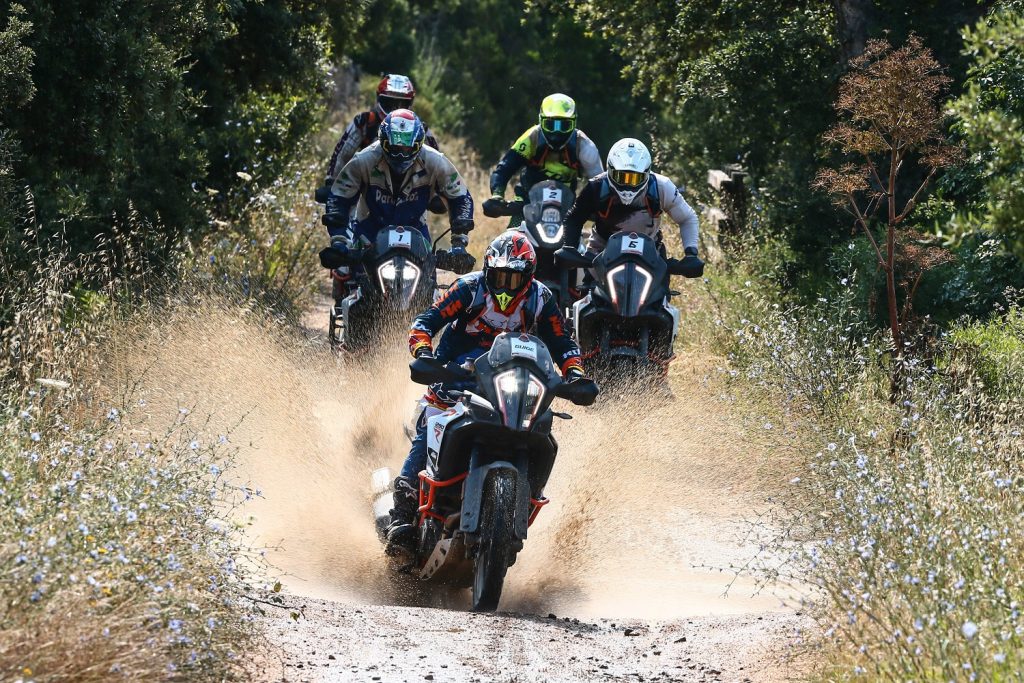 The KTM BLOG takes a look back at the second ever European KTM ADVENTURE RALLY when 150 hardcore KTM ADVENTURE riders descended on the island of Sardinia at the end of June. The event also featured the first qualifying event for the Ultimate Race, a preview of the KTM 790 ADVENTURE R and we discovered why the wheels for this event will always keep turning. 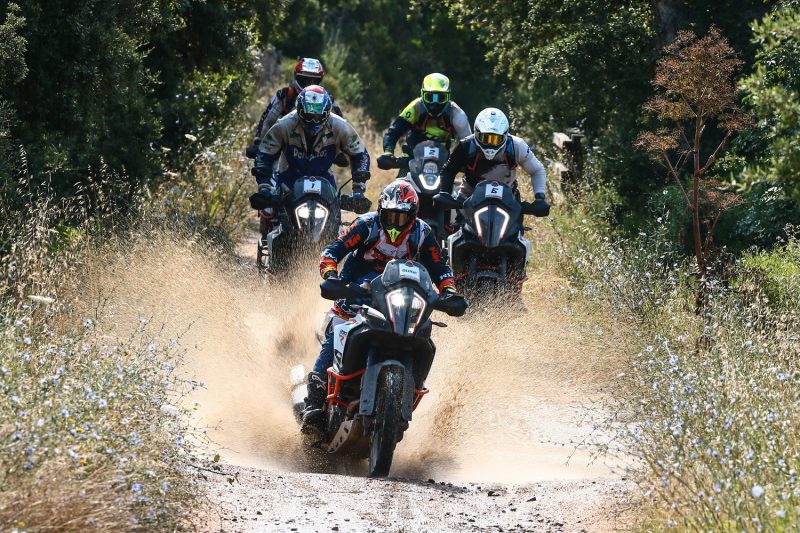 The sun may have set on the second annual European KTM ADVENTURE RALLY and the island fallen quiet from the rumble of LC8 engines, but the memories and friendships made in Sardinia will last a lifetime.

Journeying there from as far as Columbia and Russia, the beautiful Italian island didn’t disappoint the 150 hardcore KTM ADVENTURE riders from 24 nations who attended. Sure, there were crashes, broken bikes, injured pilots and navigational errors, but just outside the town of Olbia a new community was formed who rallied around each other, supporting its brothers and sisters with fixing tires, helping them get their bike through a technical stage or simply fetching them a beer from the bar at the end of a long day. And then pushing them into the swimming pool …

Over three main days of riding, 13 groups of riders spread out in combinations of ability and discipline to explore and tackle the winding trails and breathtaking roads in the north of the island. When each rider returned and checked in at the ‘Home Base’ at the Geovillage complex, beneath the dust-covered and often sweaty faces at the end of each day were big smiles and even bigger stories to tell over a well-earned cold one. 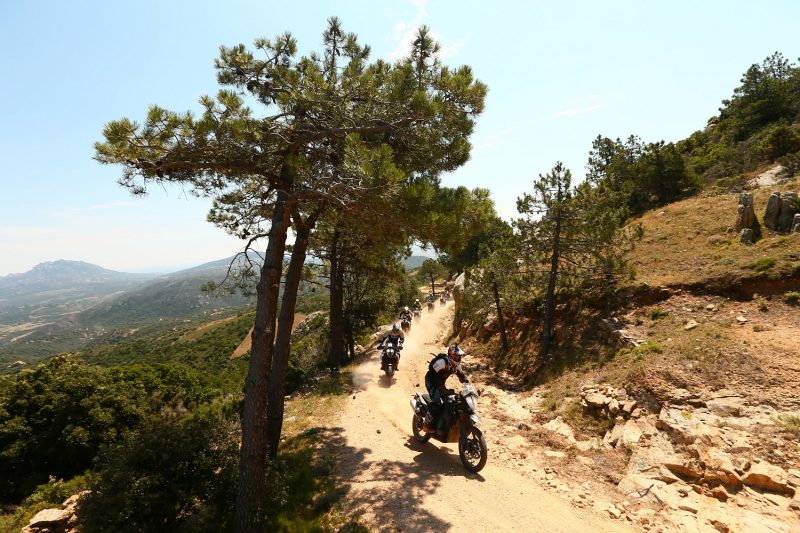 As well as water, beer, Red Bull and shade from the sun, the ‘Home Base’ was the central hub of information for riders and provided a place to work on bikes with support from KTM mechanics, a tire purchase and changing facility from Continental and a retail presence for KTM PowerParts and KTM PowerWear from the Alghero-based KTM dealer, Travaglini Motori.

Language barriers and age gaps – riders from 20 to 60 years of age participated – didn’t prevent these individual offroad and street groups from soon forming strong bonds. Within the group instructions, timings, photos, videos were shared and sometimes locations at the event are still pinging with updates from riders taking the long route home as part of a holiday, sharing awesome riding routes or planning the next adventure.

Led by KTM staff and local expert guides, the offroad routes covered on average 150 kilometers per day across the three days. With the only rain on the island reserved for the street groups (blamed on the British tour guide …), even the straightforward hot and dusty trails created a challenge. Regular stops were needed for water, breathers, photo opportunities, fixing punctures, avoiding the wildlife (tortoises, mainly) and for the incredible lunch venues. 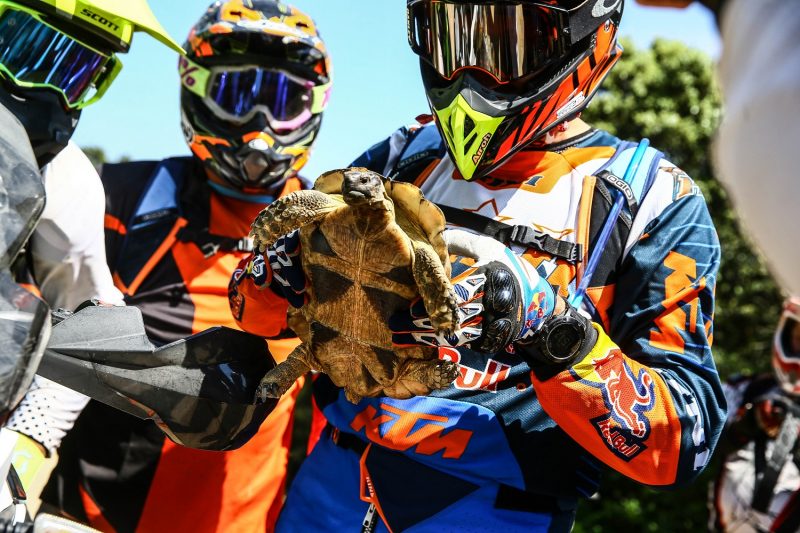 The street groups were treated to arguable the most incredible riding to be found in Europe. Averaging 350 kilometers per day, away from the coastal routes the roads provided a quiet playground for the street-tire shod LC8 powered machines as they took advantage of the grippy surface and breathtaking surroundings. Word soon spread about the quality of the road riding and for the final day, knobblies were swapped for street tires by some offroad riders and a third road group quickly formed.

Peter Ziegler, responsible for social media and community projects at KTM, was core to the planning of the event. “We know that our KTM ADVENTURE-riding customers are a special type of rider with high demands on how they want to use their machines. But from the feedback we’ve had, we delivered on that with the trails and street rides offered here and it’s great to see the bikes being used exactly how KTM intended and at the same time seeing new friendships formed. I’m not sure how we better this next year!”

ULTIMATE RACE
Aside from just the chance to explore the island on different terrains, the European KTM ADVENTURE RALLY also provided the first round of Qualifying for the Ultimate Race. If you don’t know what that is, check out this video …

But this ‘event within the event’ will happen at each of the six KTM ADVENTURE RALLIES, which take place in Australia, New Zealand, South Africa, Canada and USA. The top two from each qualifying event riding a twin cylinder KTM ADVENTURE bike will be given the opportunity to compete at Merzouga in the Ultimate Race.

The scale of this prize is huge as it is fully supported with flights, accommodation, entry, bike, race service and more by KTM; the winners will not be disappointed. They will also enjoy coaching from some of the world’s finest and fastest bike athletes, with Quinn Cody and Chris Birch. For such a big prize the competition will be tough.

Across four days in Sardinia, Ultimate Race hopefuls had to compete in special challenges. Riding wise, it wasn’t just about outright speed as technique on and off the bike was tested. Orientation and navigational challenges were also thrown down, mental and physical strength pushed as well as the ability to fix a bike in the field. At the end of the qualifying, Sebastian Blum, Germany, was the winner followed up by Stefano Sassaro from Italy to book their place at the Merzouga Rally in 2019.

After winning, Sebastian Blum said: “I was a hard enduro rider who discovered adventure riding to be able see and travel to offroad terrain not normally accessible. I was 100% sure I wanted to attend the KTM ADVENTURE RALLY because I wanted to see the tracks in Sardinia. I had everything prepared so I was also ready to participate in the Ultimate Race and it was a lot of fun. It’s a dream for any enduro or adventure rider to try a rally and I want to see how high I can come at Merzouga.” 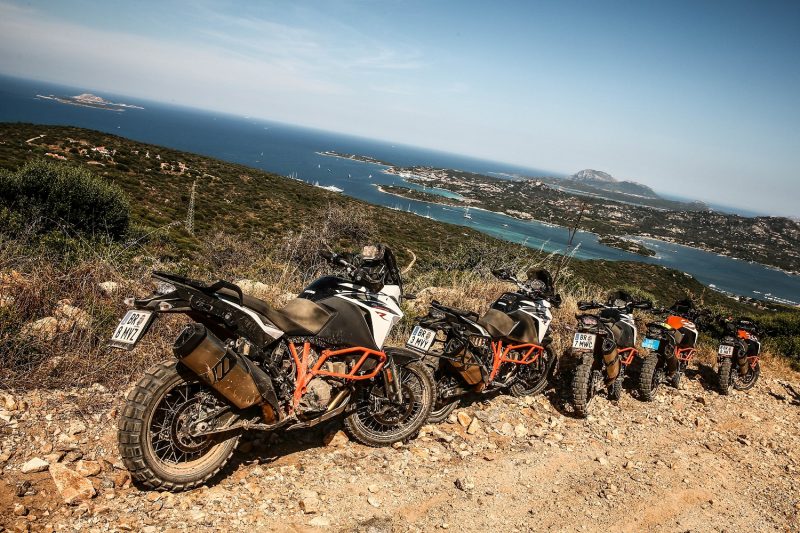 ADVENTURE: A NEW PATH
Fresh from the Australian KTM ADVENTURE RALLY, New Zealand’s Chris Birch was on hand as KTM’s ADVENTURE ambassador and rider coach for the KTM Ultimate Race. Another big reason for Chris to be in Sardinia was to give the 150 KTM ADVENTURE-owning attendees at the rally an exclusive first public introduction of the upcoming KTM 790 ADVENTURE R – a break from traditional as it is usually journalists who get the first look at new bikes!

Despite being an all-black prototype version with some rough edges as the bike is still in its development process, the potential was clear to be seen as Birch rode it in anger on multiple days of the Rally on the enduro track and on the many trails before being formally introduced in a presentation with a question and answer session afterwards.

“I felt like I was cheating on my KTM 1090 ADVENTURE R by riding the new KTM 790 ADVENTURE R!”, Chris Birch says seriously. “I can’t say too much about the bike at the moment as KTM are still in the development process, but this isn’t a bike to replace the KTM 1090 ADVENTURE R or KTM 1290 SUPER ADVENTURE R but further boost their ADVENTURE range. It rides completely different, but the chassis is very capable and feels incredibly light.”

“It’s a lot of fun and the engine is real peach. Personally, I have to ride it a different way to the KTM 1090 ADVENTURE R, but I think for a lot of people the low seat height and easy maneuverability will make this popular with riders who want to start growing their offroad ability and still have a great touring machine. I can’t wait for the finished product arriving next year.” 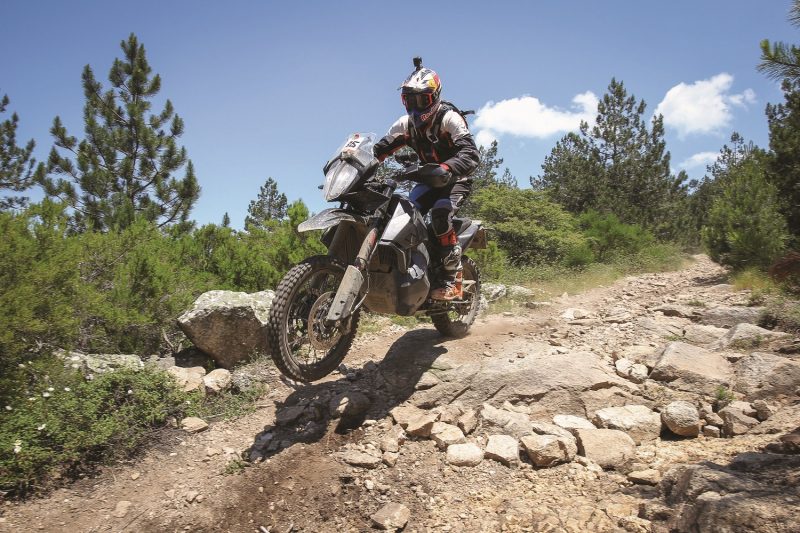 And it seemed that feeling was echoed by many of the other riders in attendance who scrabbled to sit on the bike or take a photo of it. Stay tuned for more information in November at the EICMA event in Milan …

So, not exactly a relaxing holiday, but the 2018 European KTM ADVENTURE RALLY provided incredible riding set against stunning scenery, an exclusive look at a future KTM model, the chance to improve riding and maintenance skills and the opportunity to win a fantastic, once-in-a-lifetime prize. Every time the attendees put on their official t-shirt from the event or they receive a message from a fellow member they will remember these unforgettable experiences. The memories they shared with fellow ´orange bleeders´ will raise a smile as well as thoughts on where the next adventure will take place.

159 Responses to The adventure never ends