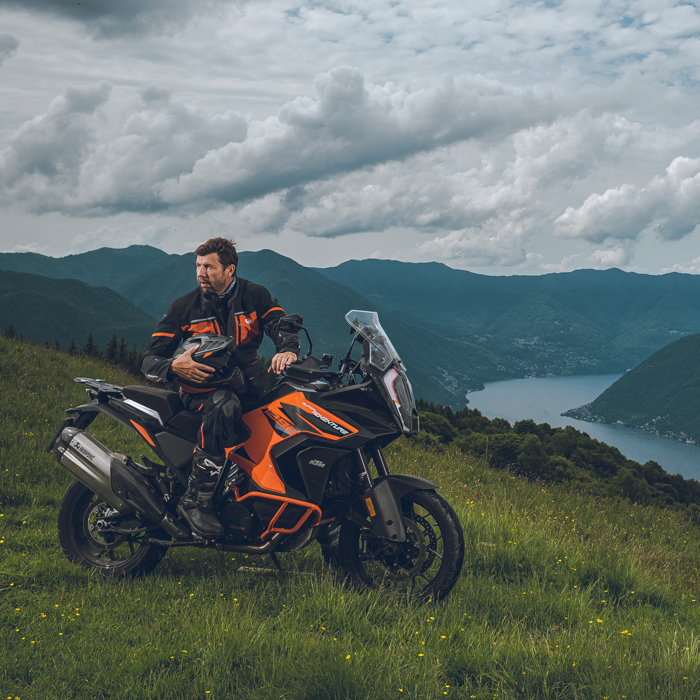 THE BRAVE BIKER: HOW A FINANCIAL ADVISOR CHANGED HIS LIFE TO BECOME A TRUE GLOBAL BIKE ADVENTURER

There are plenty of travelers and motorcyclists who stretch the full limit of their fuel tanks and wallets but for Johnny Nice a life in the wild is a pure lifestyle choice. We ask how – and why – a person commits to adventure…

Johnny Nice has a booming voice. We’re speaking on the phone after the 51-year-old has completed a full day of enduro riding. “On average I am 7-8 months of the year on the road,” he thunders down the line. Johnny is a self-made man with an envious lifestyle centered on two-wheels.

His vehicles of choice for the better part of a decade visiting 72 countries and tours around Europe, North and South America, the Middle East and North Africa are the KTM 1290 SUPER ADVENTURE S and R. Something of an ‘orange bleeder’ due to his love of enduro, Nice and his endeavors have come to represent much of the philosophy entwined with in the SUPER ADVENTURE and the possibilities the bike brings.

It would be easy and too simplistic to think of the Italian/Israeli as ‘a wealthy guy on a bike with a passport’, instead the overriding impression of Nice is of someone that advocates the power of empowerment: in short getting yourself into a place to live the life that you really want. For him that means in the saddle of a KTM and without the conception of boundaries.

Right, so where did the philosophy come from to embrace the whole adventure biking vibe?

My life was quite adventurous! I was a ski instructor, but I had a lot of problems and the government actually seized my car once. When I was 28, I was living in the basement of a friend’s house sleeping on a couch. I’d recently come back from the U.S. where I’d graduated in finance and business administration from the University of New York. I remember looking in the mirror at the time and thinking ‘I don’t like this guy’. I knew I had to change something. I changed my social circles and began to read a lot. I’d failed in a few businesses but decided to try another in finance. By the time I was 33 I was able to say that I was ‘financially free’. I’d moved to London. My company grew and when I was 41 I partially sold it and invested in real estate, start-ups and so on. And this allowed me to start traveling.

People might see your blog or Instagram and think ‘how did he get to a place where he can just get on a bike and go anywhere?’, not only the financial side but the attitude and approach…

I think people would like to do a lot of things in their lives, but their goals stay as dreams. They have a dream to change their lives one day, but that day never comes. The toughest part is to make the first step. Realizing your dream is easier than you think because you deal with the problems when they come. You just need to pick up your stuff, start the bike and go.

You’ve done some serious mileage, so why keep going?

I love to meet new people and experience different cultures and languages. I’m a curious guy. I think that life is an adventure every day. I have a bucket list! I wrote it 20 years ago. There are 100 points on it, and I followed it and checked things off. There were some where I thought ‘I don’t like that anymore…’ so I changed the list. When you do something that you love then you never get tired of it. It’s almost 10 years that I’m on the road.

How did you get into bikes?

Oh, ever since I was a kid. My mum actually asked someone to cut my bike into two pieces when I was 14 – 15 because my knee and other parts of my body were a mess! When I was young my dream was to travel with a bike.

Enduro bikes and Adventure bikes were always my favorites. They were perfect for the sort of riding I wanted to do. I would say I’m offroad half of the time. An asphalt road is just a commute to the next offroad section. So, for this, the KTM is exactly what I need. I’ve done hundreds of thousands of kilometers and never had a problem. Never. I took it to some places where you’d think ‘how is that possible with this heavy bike?’ like the side of a mountain in Chile or the depths of Peru. I go with a KTM because I want to visit places where others don’t go.

The KTM 1290 SUPER ADVENTURE models have that ‘no limits’ tag. Have they taken you to a place that maybe you were surprised to reach?

Yes! That would have to be Bolivia, Peru and the southern area of Argentina. Patagonia. I crashed the bike and fell down numerous times through those areas. I went through some really hard paths and where guys are using 300 or 250cc Enduro bikes. At times it was almost impossible, but I made it and that’s because of the KTM. I couldn’t have done it with another bike.

People see the photos and the sun and idyllic life but there must be a lot of admin, waiting, transportation and organization to that lifestyle as well…

Yeah, people might think that I’m cruising all day, smiling under my helmet in the sun. That’s not always the reality! Sometimes you are riding all day in the rain, or having to get through the snow. You get worried about breaking the bike or having a puncture. Adventure riding can be about solving problems or meeting challenges. Something will crop-up every day and you have to be ready for anything. Knowing how to do administration is another skill: border crossings are rarely the same. Some of them happen in minutes, others happen in two days! In Bolivia it can be quite tight to find gas. There is always an obstacle to get around to stay on your way.

You must be asked all the time for your #1 place, but where would you least like to travel again?

Definitely the hospital I had to visit in Peru. I had been riding at almost 5,000m of altitude and crashed in some mud and broke my collarbone. My GPS tracker saved my life because I could barely breathe, and an ambulance found me after three hours. I was nine hours in the ambulance and when we arrived at the hospital there were chickens wandering around the emergency room.

What happened to the bike?

The bike stayed on the mountainside for a few weeks and was actually snowed under. The KTM dealer from Lima was able to pick it up after two-three weeks. It was terrible. You know, the most common technical problems on the road are punctures. I would say it happens once a week on average. It can get very complicated to fix things in the pouring rain and in the mud! I remember once I was in a national park in Brazil and had to fix a tire and it was 47 degrees. I was melting!

Ireland, for sure. Irish people are super-easy about bikes and love bikers. The UK also. I will say Brazil and Argentina too. When you are in Brazil the police always stop you. Not to check or control the bike but to take a photo or to talk!

Like a sportsman, are you aware that you are perhaps living an extraordinary life?

You have to think that every single day means your life is one day shorter. It’s like a yoghurt in the fridge with the ‘best before mark’, except you don’t know when your date will be. Time is the most precious commodity. You have to live your day in a way that is amazing for you. I don’t think I live an extraordinary live because I’m doing what I love. For others it might be playing golf, tennis, fishing or parachuting. Don’t wait for it, just do it.

Johnny likes to post stories on his travels through his colorful Blog www.thebravebiker.com You can also follow his global adventures via his profile on Instagram: @thebravebiker

27 Responses to THE BRAVE BIKER: HOW A FINANCIAL ADVISOR CHANGED HIS LIFE TO BECOME A TRUE GLOBAL BIKE ADVENTURER