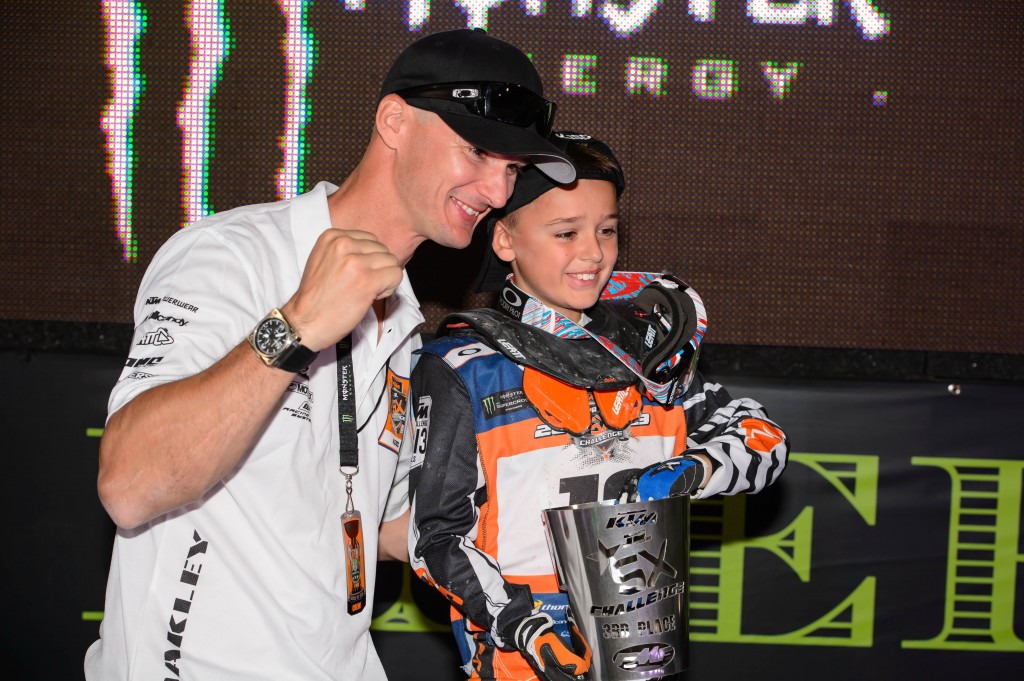 Sometimes the Apple does not fall far from the tree. In the case of the Everts family this has been the case for three generations now in motocross. Here Red Bull KTM MX2 Team Manager Stefan Everts checks in from Las Vegas where nine year old son Liam has just wrapped up his first major race podium finish. 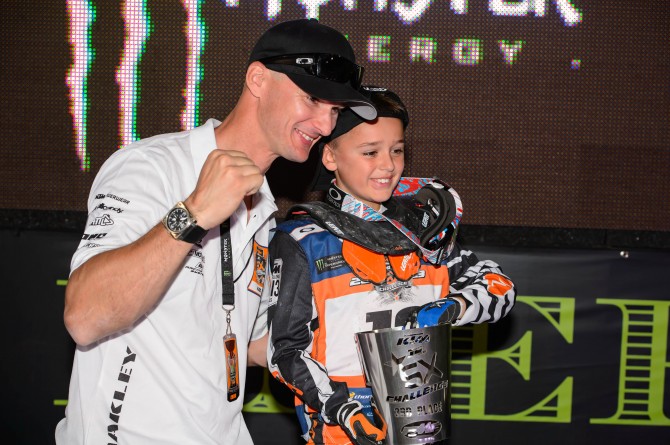 The KTM Junior Supercross Challenge was part of the Monster Energy Cup at the Sam Boyd Stadium for the first time and filled a place on the race programme that saw a ladder of junior, super-minis, all-star amateurs and the AMA heros all on the same bill. The top KJSC contenders from the 2013 events at AMA supercross meetings gathered in the party city for what is now the traditional end of American season curtain closer. Liam Everts made a decent start and successfully defended third position to potentially ignite another chapter of this family’s immense sporting story.

Stefan, you and Liam are in the U.S. again…

Yes, this is our second time in the KJSC but this race involves all the winners and the fastest riders so far, so really it is Liam’s first ‘major’ event.

You have been racing and riding most of your life but do you have any of those paternal anxieties when Liam is out there?

I have good confidence in him. He has been riding already for a few years and we are lucky in that we had the opportunity to do some supercross training in Germany through the winter. We did some practicing on the 50SX for here because he is already on the 65 like most of these kids. I feel confident that he knows what to do. There is a little bit of stress, but not too much. Third position was his place and he came under a bit of pressure at the end but we’re really happy. 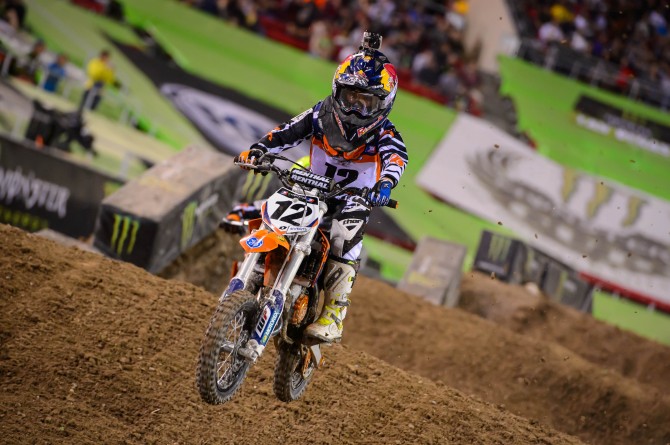 Do you feel people are watching you to see if you are the pushy or the supportive kind of father?

They can judge me as much as they want but I don’t try to push him too much. We haven’t done many races especially compared to other kids. Just a few in Belgium and the level of those were not too good. I just want him to race now – if he wants – and he’ll do a couple of 65 events in the European championship next year but step-by-step.

If he is already doing supercross on stages like the Sam Boyd could this then have some effect on where he might want to compete in the future?

This for sure will have some influence on a career but he has already been watching a lot of supercross on DVD. He knows everything that’s going on and is really into it. What KTM give to these kids – to be on this stage – is a dream. We’ll have to see how it goes but I think he also likes the GPs. If he continues to race then there is a chance he could come here but then also stay in grand prix.

Does he ask you any funny questions about the sport?

He usually asks about other riders and what’s going on with them, why they are riding with Alpinestars or with another bike. He catches on quick and takes note of results. He asks about contracts as well! Wanting to know how long they are, some funny questions like that.

Is he aware that you used to beat people like James Stewart [winner of the Monster Cup last week] on a motocross track?

Yeah, he knows! He knows I raced some supercross and that I beat people like Stewart.

He’s wearing the Leatt 5.5 neck brace for kids. Is that something you push for?

They all get a brace from the organisation but Liam already has some support from Leatt. I want him to wear the safest gear out there and the Leatt is something I really believe in. They invented the neck brace and offers the best protection

On the podium the announcer asked him “what are you gonna do next time?” and he had a one word answer: “win”. Will he have to brush up on his media technique?!

Haha. I don’t think he did too badly, especially as English is not his first language. He copies some of the riders he sees on the TV! 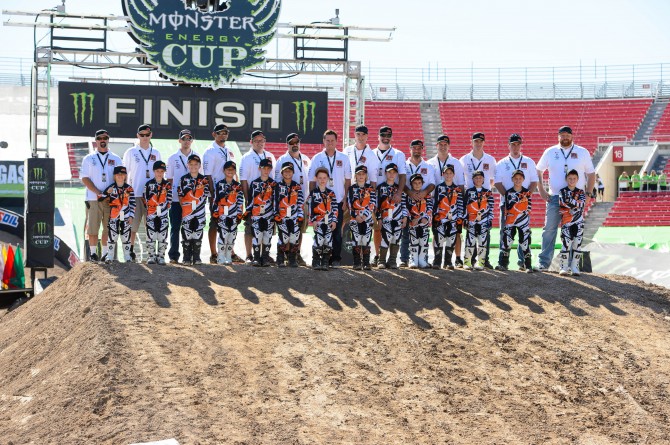 What is next for you now?

There is not such a busy winter period right now. We are just making the planning for pre-season with the international races and we still have one official test with our MX2 riders. They are still preparing material in Austria for that. It will be good to be at home and get into that.

107 Responses to The Everts Apple!