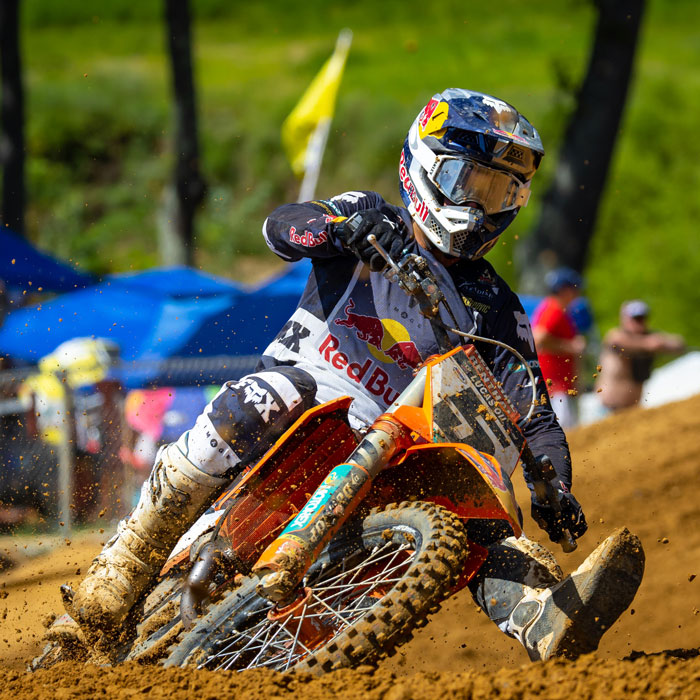 THE FEAR AND THE FIGHT: ‘GET SERIOUS WITH DUNGEY’ PART 4

The revealing short video series with the AMA Supercross legend continues. In this instalment Ryan Dungey talks about the mental drain and demand of elite level racing.

Talkative and illustrative, Ryan Dungey’s words are also unmissable in terms of lifting the lid on what it is like to be an elite level racer and champion at the very top of American AMA supercross and motocross. Dungey helped cast milestones – wins, titles, presence – for Red Bull KTM Factory Racing in the ‘indoor’ series but it was by no means an easy task, even outside the grueling training and competition schedules.

Dungey also had to manage personal doubts and the worries over SX tracks that could be intimidating and even grew in size as the seasons rolled on. “You’d see obstacles and you can see bad stuff happening,” he admits. “That was the most intimidating part for me… but I always took everything in supercross slow.”

“Quad jumps? You couldn’t prepare for those challenges; you just had to adapt to them,” he adds, before revealing how fear was another form of pressure that added to the expectation of results and success. “If you weren’t comfortable then you wouldn’t do it. There were times when you didn’t quite believe in yourself as much as you should… and you just had to man-up and put the fear aside. If you didn’t then you took a 5th, 6th or 7th that night and we didn’t want that. Those things stressed me out and weighed a lot.”

How did Dungey cope with the glare of the spotlight and the knowledge that thousands of fans were pulling for him every Saturday evening? “Going back to basics: me and the dirtbike and focusing on the goal that night,” he reveals.

Ryan says the bumpers crowds at supercross and AMA Pro National motocross “brings the energy to a whole new level” but also talks about his most “intense race ever” – in Las Vegas 2017, which was also his final supercross outing – where “months of weight” dropped from his shoulders after a tight championship decider.

As well as sharing anecdotes, memories and – of course – tips for those with eyes on improving their racing game, ‘Get Serious with Dungey’ also shows the new features and the merits of the innovative 2023 KTM SX-F range, specifically the ’23 WP Suspension tech and the effects on the chassis that influences rider comfort and confidence.