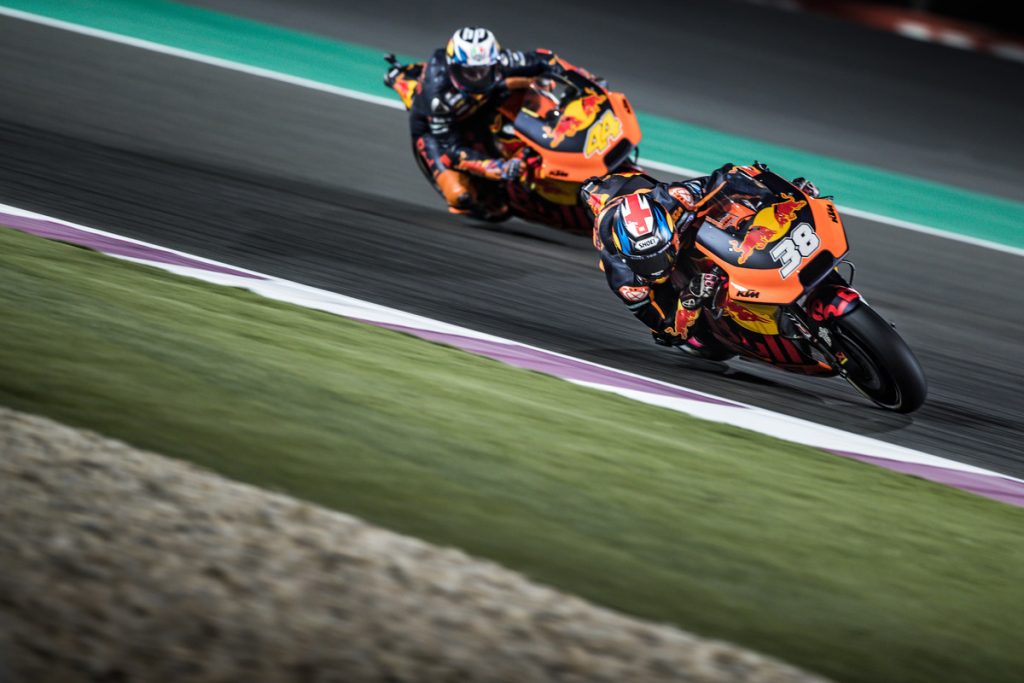 The Hard Yards: Getting ready for MotoGP™ riding

Red Bull KTM riders Bradley Smith and Pol Espargaró explain some of the demands and criteria for being in shape to cope with the rigors of MotoGPTM.

Accelerating and braking (often at more than 1.4G … fighter jet pilots can briefly withstand 8-9 when flying and maneuvering) are some of the toughest elements of throwing a 160 kg MotoGPTM bike around nineteen race tracks of the FIM World Championship. Red Bull KTM now have a full year of understanding the capabilities of the KTM RC16 and that goes for Bradley Smith (27 years old) and Pol Espargaró (26); experienced Grand Prix winners and title holders and now well-versed in the idiosyncrasies of the Austrian prototype. 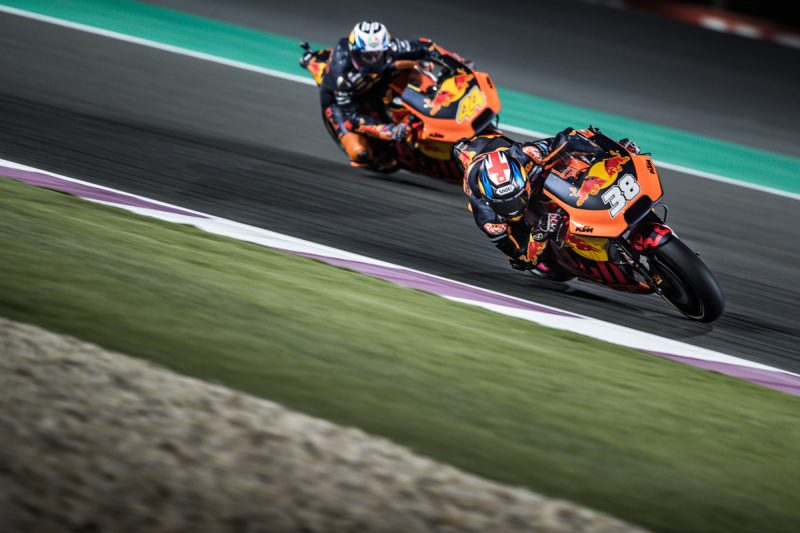 Catching a MotoGPTM star in the flesh often means seeing a small, lithe and athletic figure. The 24 riders on the grid all subject themselves to rigorous training and testing regimes to not only be light, flexible and energetic but also strong enough to hold a motorcycle that very few can handle … never mind push to the edge of physics.

Smith in particular likes to explore the scientific element of his preparation. After all, MotoGPTM athletes rarely get to gun their race bikes in anger save for the Grands Prix themselves and half a dozen tests through the year. It allows time for riders to hone their shape and skills in other ways, such as different bikes sports and training methods to optimize their personal metrics.

“I use Polar technology to measure heart rate, and then lactate as well because I feel that is a very crucial marker; it tells you biologically what is going on inside your body,” Smith reveals. “It tells you aerobic and anaerobic thresholds and you can also use Watt meters and you can be more specific with your intervals and your training zones. Most training sessions I know what is going on with my numbers but I test for new ones and work zones every six weeks.” 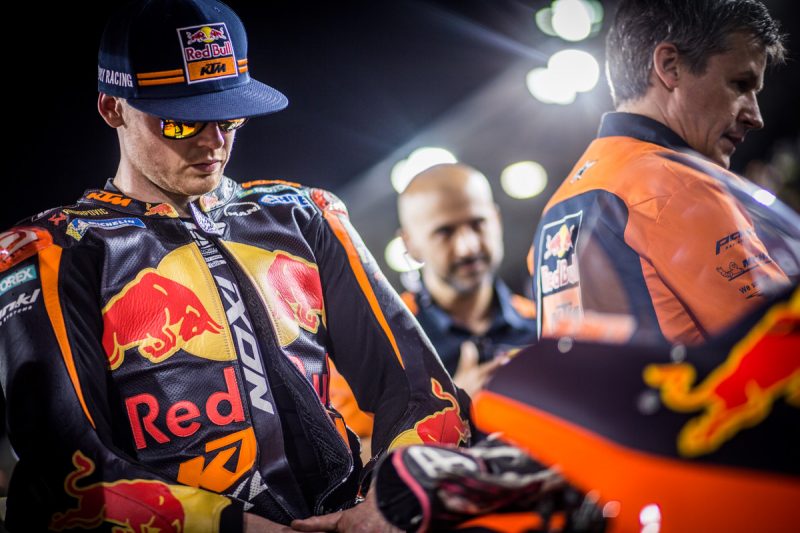 Smith’s careful log and record of his physical state shed some light on the stress the body is under while racing in MotoGPTM. And it is difficult to simulate in any other way. “My highest heart rates have come on the MotoGPTM bike and I haven’t been able to replicate it in cycling or running, so that does show the level we are riding at,” he says. “Heart rate versus lactate is a little bit different and I think adrenaline plays a role as does heat dissipation with the leathers. Also a little bit with breathing because of the G-forces through bracing yourself on the bike.”

“Another thing is confidence,” he adds. “And flow and mental state. There are some days when you are not in a battle and you can be at 93% heart rate and you feel like you are dying and they are others when you’re in the flow and you’re hitting 103 and you feel like you have another step you can make. You can never quantify the mental side, and things like focus where you can be just a little bit off and things become ten times harder. So we just try to control the ‘controllables’ and work on the rest when out on the racetrack.”

When pushed for a form of exercise that comes closest to the drains of MotoGPTM Smith says a Concept2 rowing machine has its merits. “If I had to choose one then it would be Concept2 because that is the closest to what we are actually doing on the bike.” 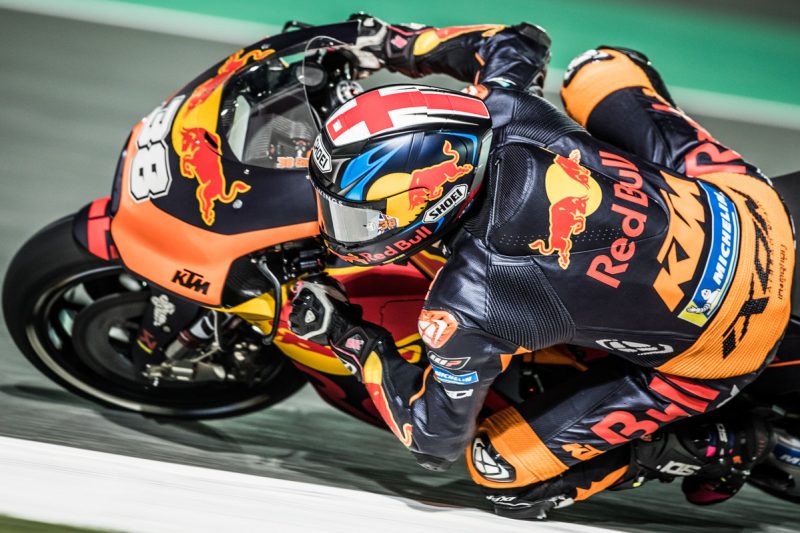 Pol Espargaró, much shorter than Smith, agrees but also advocates the correct use of weight training: “The rower works very well and is one of the best exercises for motorcycles because you are training all the right parts of your body. Aside from the bicycle I use this tool a lot. I do a lot of weights but low quantity and a lot of reps to keep the muscle as light but as strong as possible to stop it getting too big, heavy and avoiding things like arm-pump.”

“It is good to know your body and your heart rate as much as possible,” the Catalan says. “We use monitors and I have a trainer so we follow one line of work. It was a bit hard for me this pre-season because I didn’t have much time after the crash [in Sepang]; only one and a half weeks before going to Qatar. So I felt a bit weak for the first GP.” 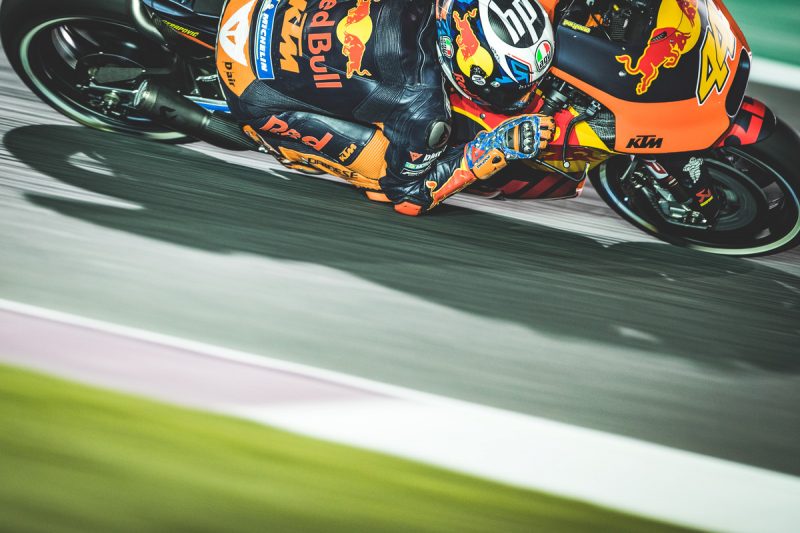 Many Instagram images and stories will show the majority of MotoGPTM riders constantly on a bicycle or motorcycle of some sort. They keep active. But there is no generic plan or formula for peak bike fitness. Espargaró: “Every rider has a way of training and everyone feels different. It also depends on your weight and height. For example, compared to my brother Aleix, who is taller, I need to work on my muscles a lot more whereas he is on the bicycle to keep his weight low.”

Motocross professionals typically have a base training phase in the winter or early pre-season where much of the heavy cardio and fitness work is done. Do MotoGPTM riders have the same ploy or can they take advantage of a calendar that is spread from March to November and ultimately involves much less time in the saddle compared to the MX guys? “I train at more or less the same rate through the year,” Pol explains. “I always try to do some ‘moto’ on the weekend. I love Supermoto but it is hard in cold conditions. Otherwise, it is some enduro or something similar because it is very easy to get hurt with motocross. I try to do as much as I can.” 74 Responses to The Hard Yards: Getting ready for MotoGP™ riding