The hardest sport: 3 ways in which MX will blow your body (as well as your mind)

Anybody who has ridden a dirt bike in anger will know how demanding it can be. For the very top professional motocross athletes at a Grand Prix or AMA National then each race brings as much punishment as it does exhilaration. In an effort to work out what is going on with the human body over the course of a thirty-five minute Grand Prix moto we asked renowned Sport Scientist Stephan Neusser for some more information …

Red Bull KTM’s Jorge Prado can barely talk. We are crouched over the sixteen year old MX2 star and rookie as he splays over the floor next to the factory team race truck after the second race of the Grand Prix of Czech Republic. He has already spoken with mechanics and team staff and we just want his reaction to a meeting where he has finished fourth overall and narrowly missed the podium. “Can we do it a bit later?” he gasps. “Estoy reventado”, which, directly translated, means “I’m busted”.

Nevertheless Jorge takes a breath and then recalls the story of his two races, at one point he asks for water and can barely organize his thoughts even though we are conversing in his native Spanish tongue. Prado, already a grand prix winner, is on something of a journey. 2017 is just his second season racing the KTM 250 SX-F and the GP rookie’s longest racing campaign by far. The rigors of MXGP and facing hard-packed, rough tracks and soil, sand and rain, deep mud, intense heat and other conditions is an education at ‘the deep end’. 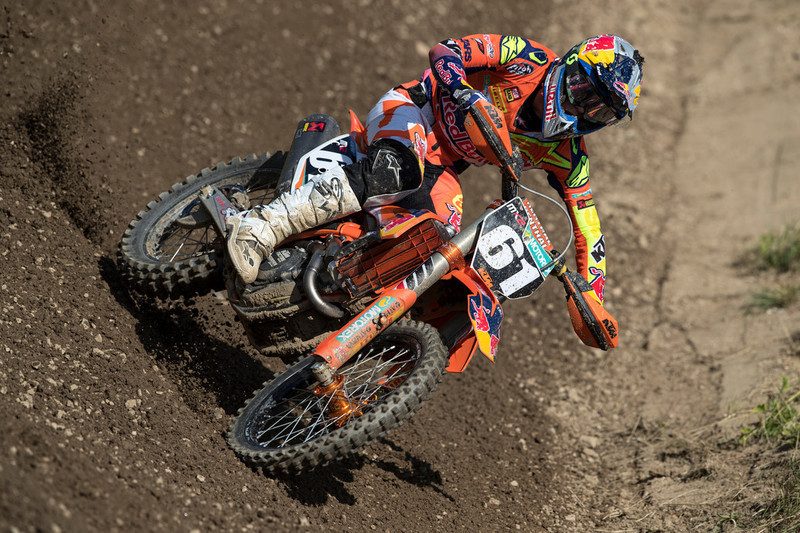 Prado’s exhaustion might be in contrast to the quiet calm of decorated veterans like Tony Cairoli but it does highlight what a physically crushing sport motocross can be (and that’s without examining other heavily apparent aspects like psychology, confidence and injury). German specialist Stephan Neusser has actually been charged with helping Jorge work his way through his maiden Grand Prix year and we couldn’t think of a better or more knowledgeable person to provide some insight as to what a person is enduring and ‘suffering’ through a motocross outing, race or high-paced ride-out.

1. Pushing the ol’ pump
Using a myriad of muscle groups and piercing concentration to constantly maneuver the motorcycle means the heart is at the center of exertion, and motocross likes to push the most important muscle in the body ‘up through the transmission’. “I recently made some measurements in Grand Prix and the rider we used had an average heart rate of 180-190 through the whole moto,” Neusser reveals. “It was around 130-140 in the start gate but from the first lap it was hitting that 180-190 level which is nearly the maximum possible. It stayed in that zone for the whole race. The resting heart rate for that athlete is around 60.”

This means that motocross is elevating heart rate higher than many other sports. It is not only the throttle that is being twisted to capacity. “It is a sport-specific physiological demand,” Stephan adds. “A Tour cyclist won’t reach this level for a substantial period of time and you can compare motocross to sports of the same duration; I would say 10-15k cross-country skiers and 10k runners. A 3000m runner is always used to running at his limit all the time at maximum heart rate. I would say cross-country skiing comes the closest though in terms of being a full body sport.”

It is a heavy ‘ask’ of the body for one day a week but the frequency that motocross athletes ride, practice and train mean that their hearts are in pretty good shape. “Riders get used to the demand; I would say they are between 170-180 during practice for example; it isn’t far away.” 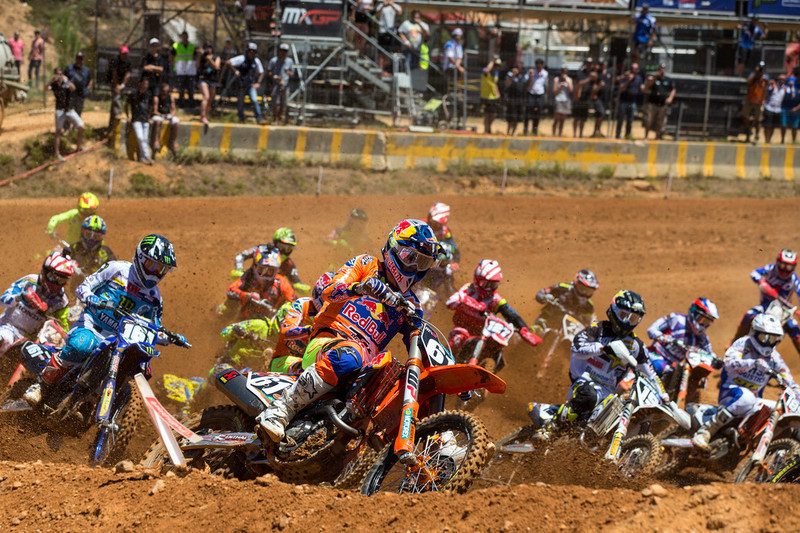 2. Go Fasta, Eat Pasta
A person is continually calling on the body’s energy levels and reserves to maintain that rate of work and to persist with a level of speed and performance. After one race alone a rider has already burnt through a large part of their total stock.

“I would estimate an energy consumption rate of 500-700 kcal per moto,” says Neusser. “If you have a carbohydrate storage capacity of, say, 1500-1800 calories with two motos and a practice session you will use almost all your reserves in the form of glycogen.”

“Energy supply is always a mix of fatty acids and carbohydrates; the higher the intensity of exercise then the bigger percentage of carbs is burned compared to fatty acids. The fitter the athlete is for endurance then the more he can get out of the fatty acids storage.”

In short that pre-race and mid-motos period is crucial for ‘refueling’. “If a sport is really high intensity then most of the energy will come from carbs and it is very important to have a good refill after practice and the first moto,” Neusser claims. For most pros this means plain pasta or rice and fairly simplistic and easy-to-digest food and supplements to get ready to go again.

Like Prado in the Czech Republic and thousands of riders before him that have described a sensation of ‘hitting a wall’ or being powerless to push harder in a race, the body’s power to endure and call on energy banks cannot be underestimated. “It could definitely play a role,” Neusser says. “I would be careful to say it [total fatigue] is purely down to energy depletion but it could have a big part.” 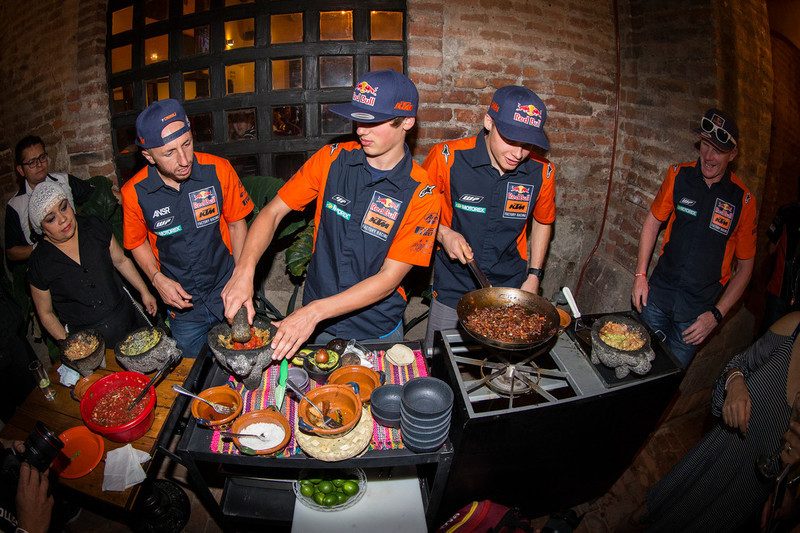 3. Don’t forget the brawn
Anybody who has physically ached and walked like Frankenstein’s Monster after a ride-out or moto will know what we mean: motocross takes almost every sinew and gives it a good tug. The exercise is breaking down muscle cells and ‘destroying’ elements of physiology at a fast rate. This erosion then needs regeneration.

Neusser: “Creatine Kinase (CK) is an enzyme in the muscle cells and is involved in the energy production of that cell. As the muscle cell gets damaged the enzyme gets transported into the capillary bloodstream and we see significant high values of CK after racing; sometimes triple or quadruple the normal level, so that’s four times the amount used in normal daily activities like walking upstairs, carrying shopping etc.”

“All blood values have a normal range and CK is 190 for a maximum ‘normal’ value. I’ve measured up to 1000 after a motocross moto, which is similar to something you’d have after a marathon run.”

“Muscle tissue and cells are being destroyed and this is because of the heavy impact and loads of riding and, in my opinion, possibly the vibration of the motorcycle.”

Interestingly recovery doesn’t mean inhabiting the sofa and ordering pizza. “Regeneration depends on the extent of the damage,” Neusser smiles. “In general you can say that if you have high CK values then it takes three days to get into a normal recovery state … but it depends on the impact. It means rest and recovery training. Just lying on the couch won’t make the process quicker. People and even athletes report that after intense exercise they feel tired the next day and then even more so the day after. Most pros peak 48 hours after the exercise but we have seen that if a rider really digs deep on a Sunday then he is still not 100% by Wednesday. It all depends on factors like the impact, how hard the athlete pushed and their level of fitness.” 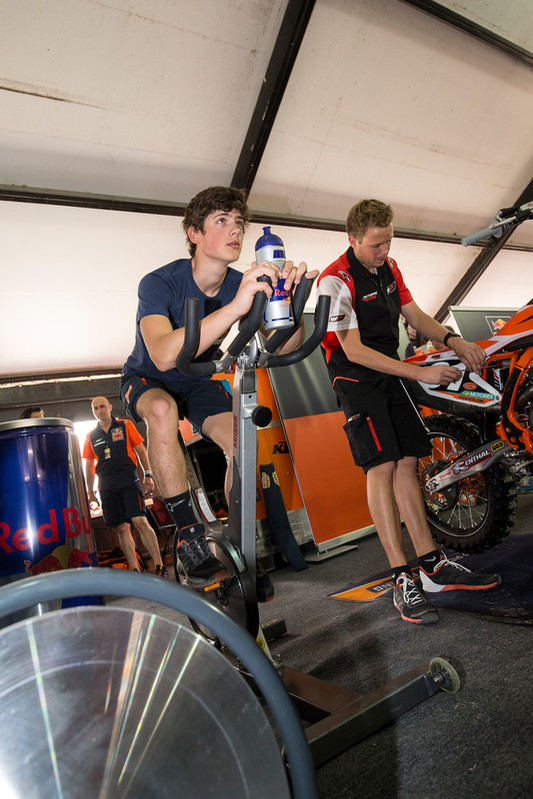 Sport generally is a fantastic thing for the body and mind. Riding a motorcycle tends to involve a small amount of both. Motocross is an activity of extremes – physical, mental even spiritual and culturally – but like most things that can be a little bad for you … it feels/tastes great.

142 Responses to The hardest sport: 3 ways in which MX will blow your body (as well as your mind)