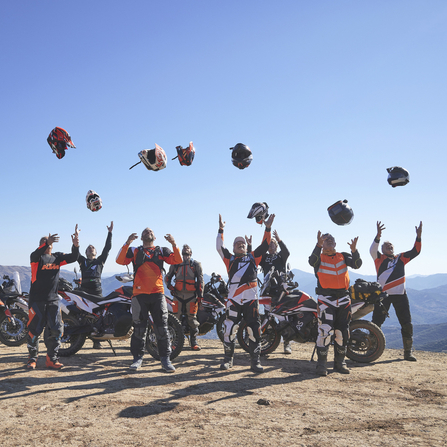 The European KTM ADVENTURE RALLY 2021 turned out to be exactly what we all anticipated: a thrilling motorcycle adventure in an exciting new destination, Greece. This is one of the best countries in Europe to ride bikes; a destination where all mountain roads can be ridden and explored freely.

Three long days of riding alongside adventurers from all part of the world, this event is a must-do for all KTM fans and owners like me. The event was based in the city of Nafpaktos, a small fishing village that had its name engraved in the history books from the famous battle of Lepanto, a ferocious naval battle in 1571 that saw the Italian and Spanish naval fleet inflict a major defeat on the Ottoman naval army.

While I was traveling the world on my KTM 1190 ADVENTURE, I stumbled upon the 2018 edition of the ADVENTURE RALLY in British Columbia, Canada and got a small taste of it. At that time, my poor Bronte (the name I gave to my beloved bike) had over 160,000 km and I didn’t have the heart to put it through such a harsh weekend of Canadian trail riding. Since then, I always dreamt that one day I could finally participate in the event and get my boots (and bike) dirty.

This year, I finally managed to be part of the event and I even had the privilege to be one of the Tour Guides. The global pandemic has forced me to spend a considerable amount of time in Greece. For this reason, KTM gave me the opportunity to inspect the tracks and assess the feasibility of the terrains before the event officially started.

As it was my first ADVENTURE RALLY, I was sincerely shocked by the number of hours KTM staff put into it. Seeing the entire team working non-stop for the duration of the RALLY was indeed incredible. From the event coordinators to the photographers, from the safety personnel to the mechanics, who changed approximately 500 tires over two days.

Local experts, medics, and support vehicles were also involved in the event, to ensure emergencies would have been addressed promptly if needed. It is quite the responsibility to ensure that 150 people get out, ride, and arrive home safely every day!

The first day was mostly designed to greet and brief the participants, coming from over 25 different countries. Riders had the option to self-navigate using GPS/smartphone, or ride in guided groups. The self-navigating participants had to bring their own GPS to the registration tent, for each device to be updated with the official event tracks. A short skill assessment was instead mandatory for whoever chose to ride in guided groups. This was important to congregate people with similar riding experiences.

Aside from the fact that many KTM employees are ex Motocross or Enduro champions, there were a couple of other “celebrities” to be seen at the event, such as Joachim Sauer an ex European Enduro Champion. We were also fortunate enough to hear the inspiring story of Joey Evans, who shared his incredible story of participating in the Dakar Rally, after recovering from a devastating injury that left him paralyzed from the chest down. A simply mind-blowing experience that should not go unappreciated.

The event was designed to have three riding days, with the second day being the longest and most difficult, clocking 267 km. As I inspected the trails myself, I knew that some of the obstacles would have been difficult for quite a few people. However, as all adventure riders know, a good pub-moto story happens only when there is challenge involved! And I believe that most people went home with plenty of stories to tell.

The KTM ADVENTURE RALLY is not your usual adventure bike event. As the name states, it is an ADVENTURE, and only differs from a rally race because there’s no competitive spirit involved. Instead, it has been created to build comradery between participants and test each rider’s capability on challenging terrains.

Dust, stones, sand, mud, water crossings, mountain passes, hill climbs and much more; the event had it all. Over 1,000 km of beautiful trails, across three different types of mountain ranges, in some of the most iconic places that Greece had to offer.

Aside from the incredible landscapes, I was simply blown away by the atmosphere that the event created and the friendships that were built between people after just 3 days of riding. I believe the reason behind this was that most participants were outside of their comfort zone. Not many were accustomed to riding over 230 km of off-road trails a day. This was a challenge for most people, as fatigue and muscle ache could break the average man. Riders were pushing and encouraging each other in overcoming obstacles, like soldiers helping members of their platoon.

But as far as events go, the event was quite a challenge for all. Most people, including myself, were lucky enough to have just a permanent grin on their faces. There was the occasional battle with flat tires, some bruises and a bike falling off a cliff that we managed to rescue. Both the bike and the rider came out unscathed and with a heck of a pub-moto story to tell.

Talking about memories, KTM managed to gather the best photographers and videographers the industry had to offer. Resulting in participants returning home with thousands of incredible action shots. If you ever dreamt of getting a photoshoot while riding your bike, the KTM ADVENTURE RALLY is the best place to get one.

As it is commonly said; a picture is worth a thousand words, and the riders’ faces after three days of blasting through the gorgeous Greek mountains say it all: