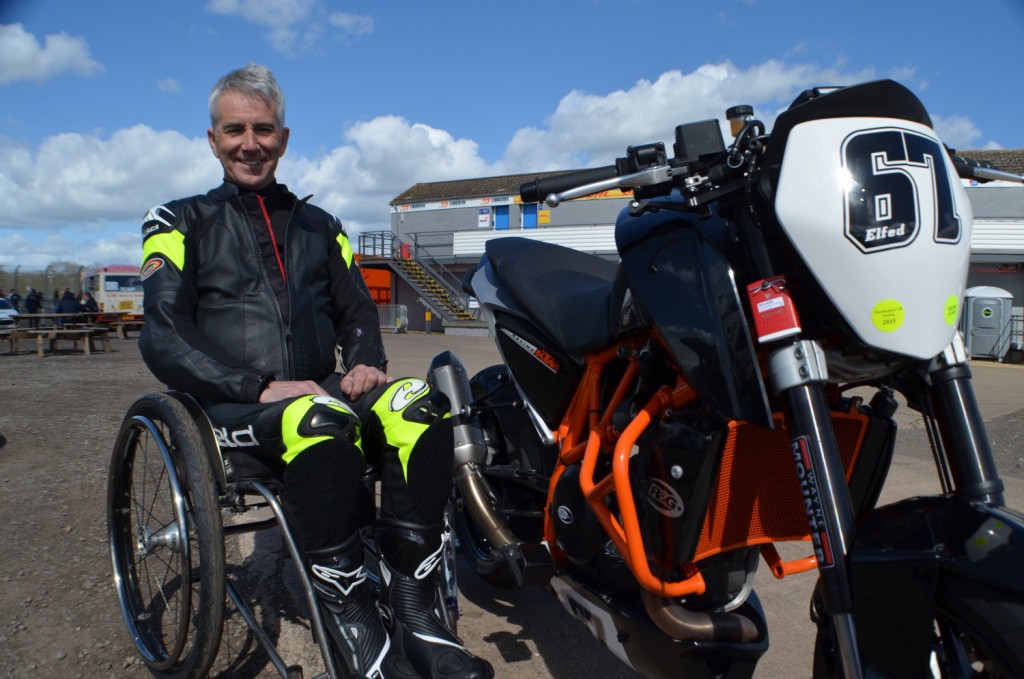 In 1981, Welshman Elfed Weaver crashed out of a race at the Snetterton circuit in England and woke up paralyzed. Adjusting to life in a wheelchair was one thing, the inability to do what he loved most turned Elfed away from bikes. But the desire to race never left and – 34 years later – he’s back on the grid.

Motorcycling is addictive. We all know this. Nothing else compares to the experiences that can be had on powered two wheels. But ask anyone who has raced a motorcycle before and they will tell you this concentrated form of riding gets even deeper.

It doesn’t matter at what level of competition they have participated at – amateur to professional – once someone has raced a motorbike they are never truly the same again. Racing flows in their blood. Fuses to their bones. Becomes them. Consumes them. Is them.

As the READY TO RACE company, KTM knows this too well. Competition is its core and that of its customers. They know what makes them tick. They understand this desire to go faster. To improve. To keep pushing.

Elfed Weaver, 57, is an addict. You might not know his name, but if you are at a amateur race meeting paddock or at a track day in the United Kingdom, he’s the man in a wheelchair next to a 690 DUKE. 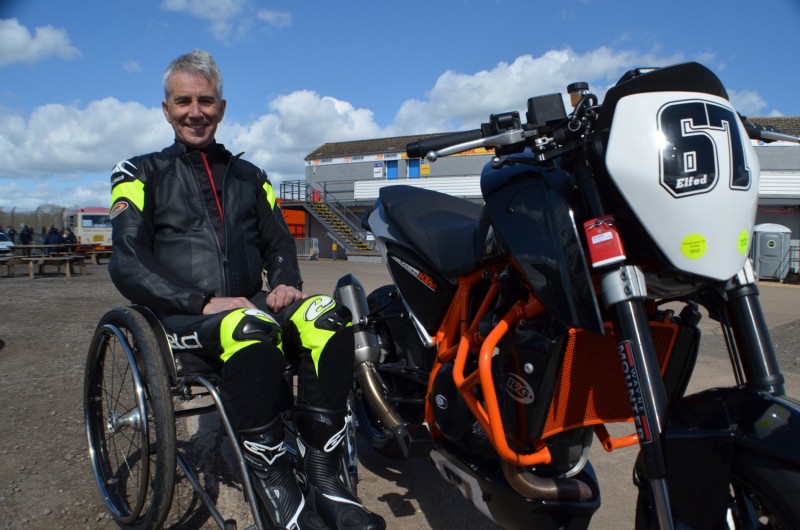 In 1981, Elfed crashed out while pushing too hard in an amateur race at the former airfield circuit of Snetterton in England. Unfortunately, the Welshman went head first into the embankment, breaking his back between the T5 and T6 vertebra to leave him permanently paralyzed from the chest down.

Losing the use of his legs was a huge thing to accept and overcome, but bikes had been Elfed’s love since he was a 13-year old boy with the Welsh Valleys as his playground. To lose the freedom of riding was possibly the biggest frustration.

Laying the blame firmly with himself and not bikes, it would still be easy to hate the cause of what left Elfed unable to use his legs. After his accident, Elfed was emotionally unable to watch motorcycle racing or to be around bikes as his desire to ride them his answer was to completely blank them out. Burying himself in academic studies, despite always disliking school, he achieved very high standards at university, leaving academia in 1995 with a number of degrees including a Post Doc to then join the Ministry of Defence research agency.

The road back to racing came after what he describes as a ‘short but fairly successful’ career with the MoD, taking the opportunity to retire in 2010. Adding divorced to being jobless; breeding racing pigeons and walking the dog was not satisfying his needs and Elfed was, once again, drawn to motorbikes.

“I almost started back riding on a trike. I got halfway through building one and then realized a trike is not a bike!” Elfed says with complete seriousness.

After discovering The Bike Experience – a charity that teaches and advises motorcyclists who have been disabled how they can ride again – Elfed got on track for the first time for 30 years in 2011 at Castle Combe through the provision of an adapted and modified motorcycle.

“Actually riding on circuit wasn’t the difficult part,” Elfed says. “But rolling out of pit lane and seeing the circuit in front of me, that was hugely emotional. But that experience was it for me – I was going to get back to riding bikes.” 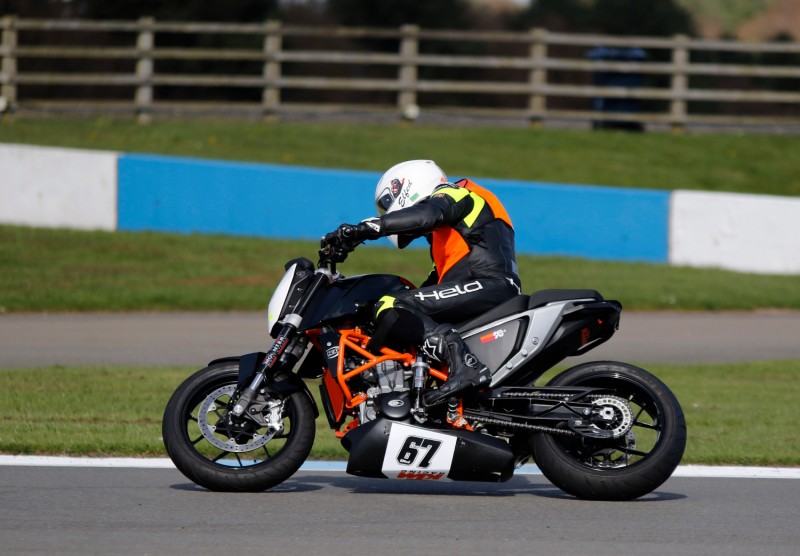 Before the accident, Elfed’s original goal was to get his national race license in order to ride the Manx Grand Prix, held on the famous Isle of Man TT course, but aimed more at amateurs to the circuit and is now part of the Classic TT. So the first major task was to complete a lifetime ambition and finally lap the Isle of Man TT circuit. After practicing on industrial estates, back roads and circuits with a modified Daytona 675, in October 2012 Elfed lapped the famous course during normal traffic time.

“I believe I was the first paralyzed rider to lap the Island. It took me about 45 minutes and it was very tiring. I had a couple of scary moments – the wind took the stabilizers coming across the Verandah and I couldn’t feel my hands coming down Glencrutchery Road. Nobody made much of a fuss about me doing the lap, which upset me a little a first, but then I had only done this for me – not for recognition.”

With his arms doing all of the work when riding, Elfed switched away from supersport bikes that put too much weight on his hands; needing something with higher bars, but also light with plenty of performance for track days and road riding. The answer was the 690 DUKE.

In 2013 Elfed began converting it for track use with PowerParts and other items, such as a thumb brake and push button gear change. He also developed his own retractable stabilizers for road use.

“I did about five track days in 2014,” the charismatic, silver-haired Elfed informs us when we meet him fresh from practice for his comeback race at Donington Park. “The stabilizers soon had to go as they kept touching down. I was getting quicker and more confident and then the opportunity to race presented itself. I thought that I might as well race if I was doing track days.”

“Since the time of my accident to now, so much has changed in motorcycling that means people with a disability can get back on two wheels and even race. It isn’t just the engineering that has created things like push button gear change systems and thumb operated rear brakes, it is the attitude of the racing organizations. We are not seen as a danger, but treated equally. Dave Stewart from the Thundersport GB racing series has been super supportive.” 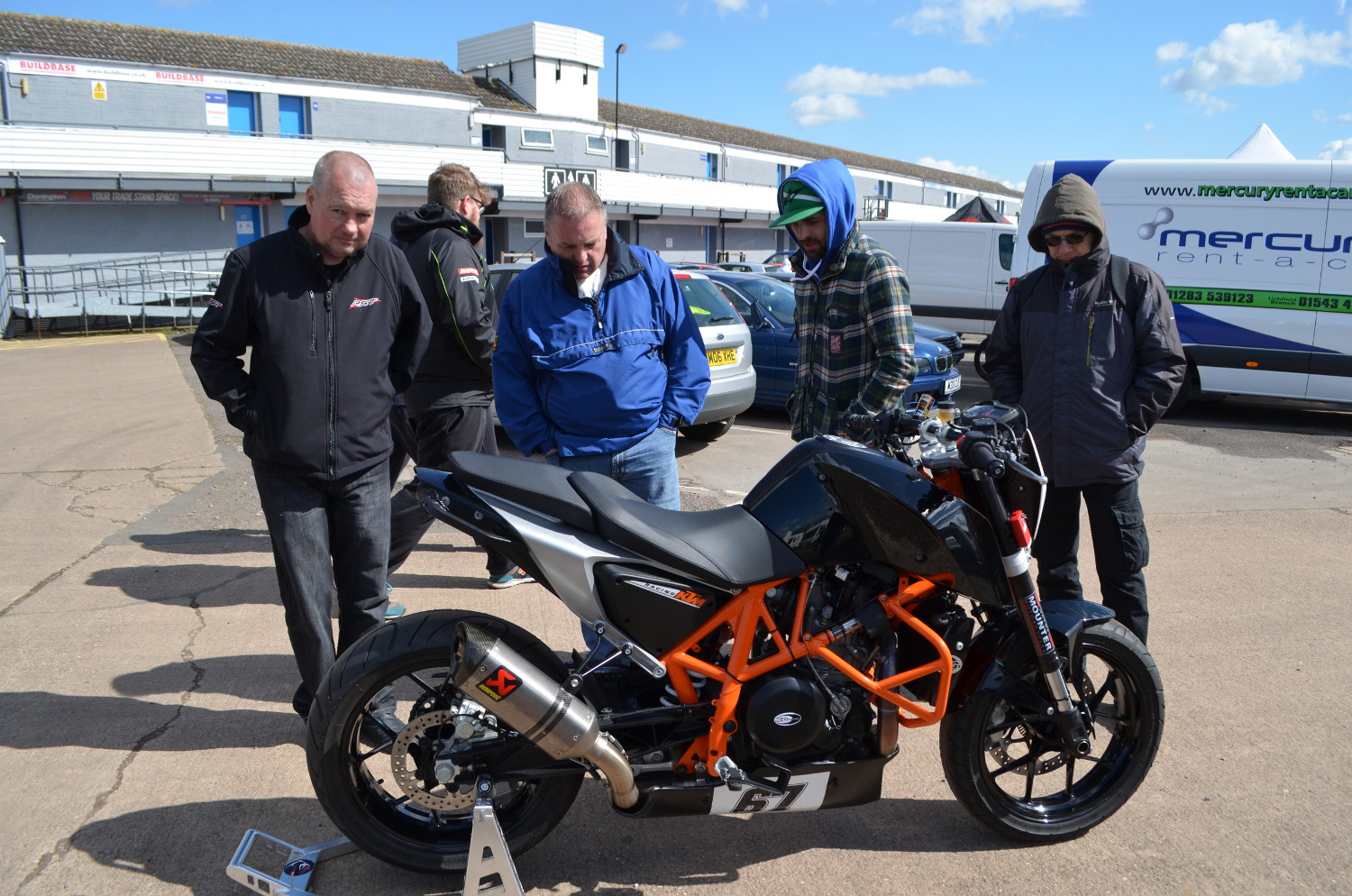 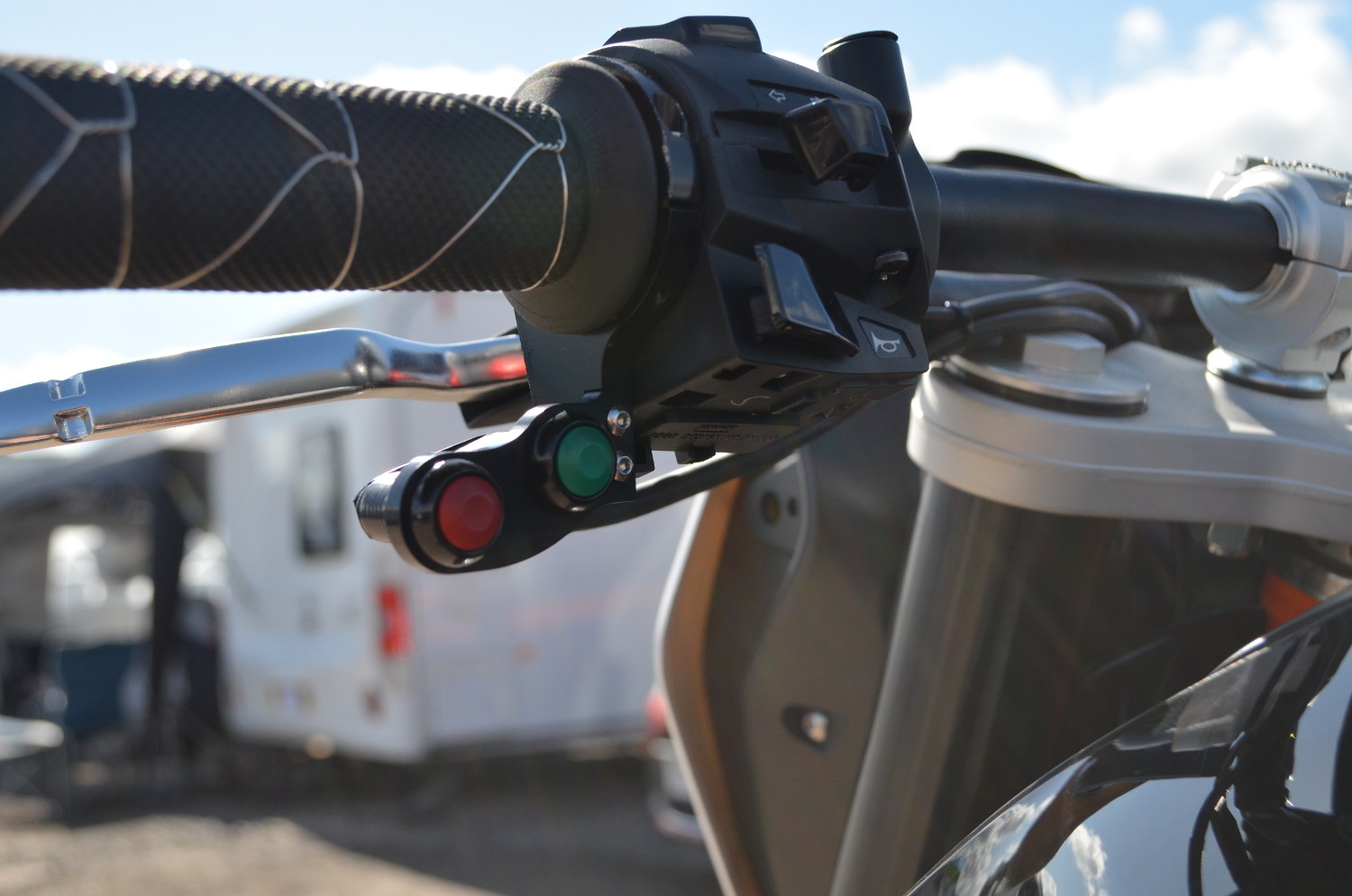 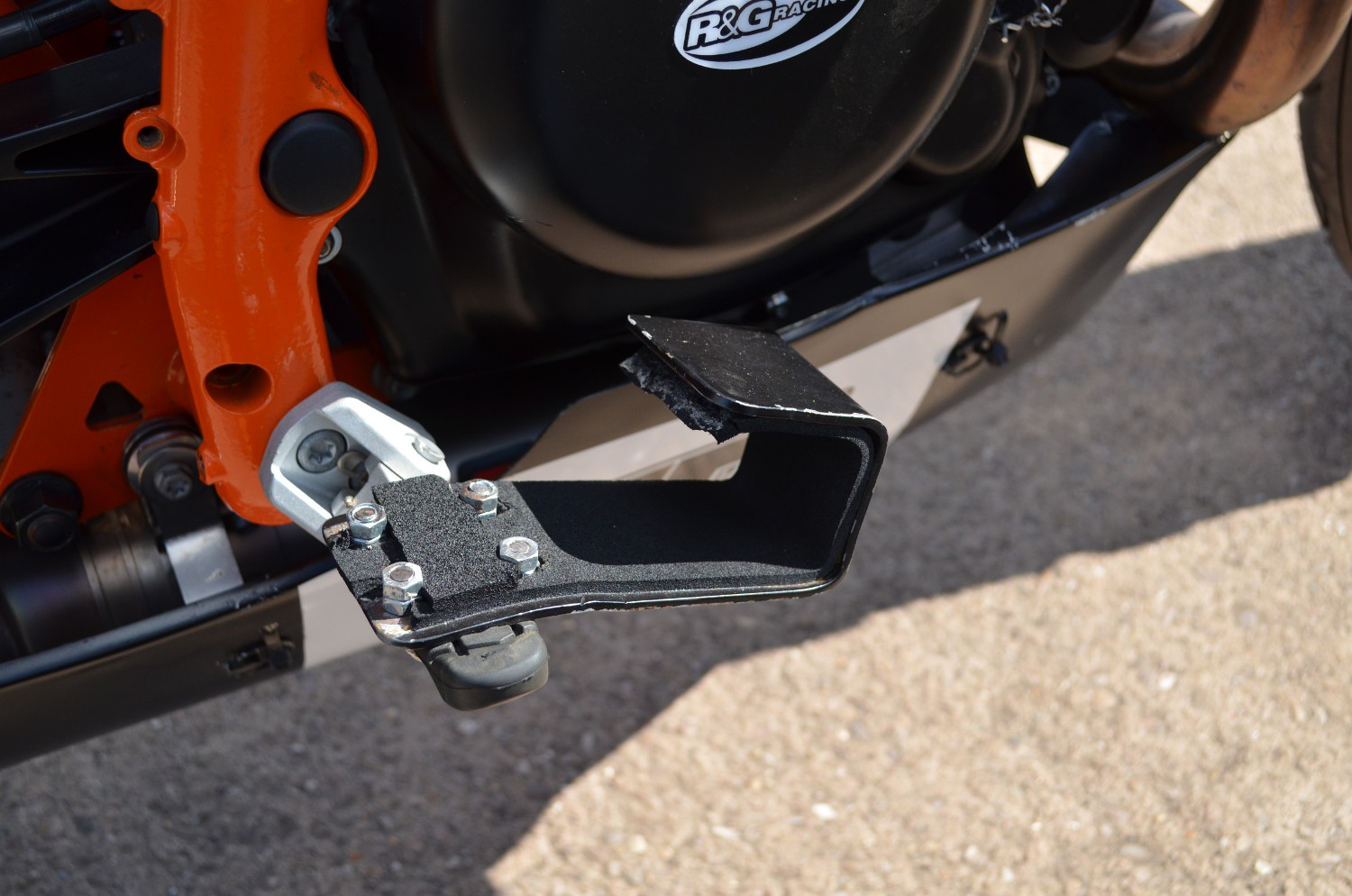 An incredibly long 34 years since his last race, the KTM BLOG is at Donington Park to see Elfed make his comeback at the swooping Derbyshire circuit. Practice goes well (although he is not happy to be so far off the pace) but the system for getting the Welshman from his race bike to his wheelchair at the end of the session goes smoothly. There’s also good news in the fact that Elfed is being allowed to start at the back of the grid, rather than pit lane. His biggest concern is sharing the grid with much faster bikes in the form of the Golden Era Superbike class.

“There’s nothing like the feeling of a field of bikes all rushing down to the first corner. That’s one of the biggest buzzes from racing and one that I’ve always remembered. Starting from pit lane wouldn’t have been the same,” Elfed explains. “But I need to stop worrying about the faster bikes passing me and concentrate on my lines.”

The time comes for the race. Despite the sun breaking through the cloudy skies, it is far from warm. Elfed takes his place at the back of the grid as his friend, Lee, holds the bike. The lights go out and Elfed is away with the full sound of the 690 DUKE’s engine unleashed with the Akrapovič race system. 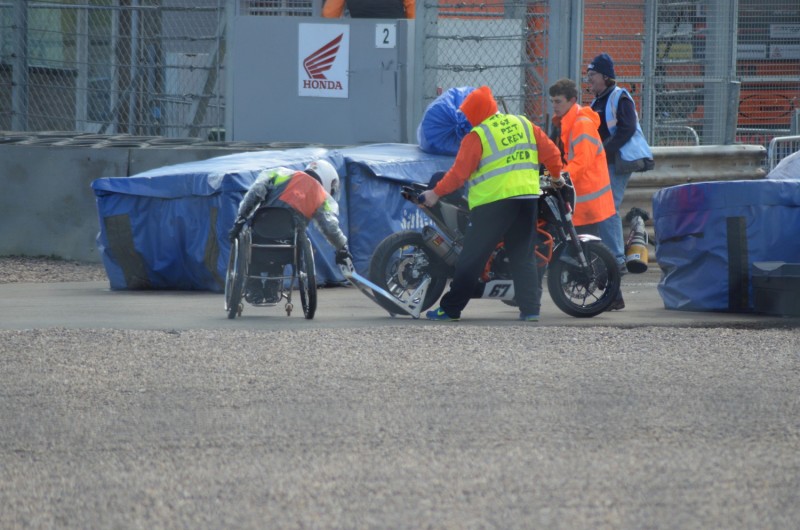 Eight laps count by. Elfed doesn’t win. He doesn’t pass anyone, but gets lapped twice. He’s last and 38 seconds from the next placed rider. But none of this matters. He completed the race and finishes with a massive smile on his face. A smile that shows both elation and relief. But he’s a racer again. It takes a special kind of person to make that leap to race – even for a regular track day rider. And Elfed’s journey has been like no other. Not only is he still learning how to ride fast again, he’s also learning to race again; that’s everything from packing the van, getting the right gearing, tire pressures, racing lines. But he’s improving and he has a plan.

“Obviously I want to go faster and that’s coming bit-by-bit. But I want to complete ten races this year to achieve my clubman’s license. Then next year I want to get my national license and then hopefully compete at the Southern 100 races at Castletown on the Isle of Man. If I can do that, then I’ll stop. Maybe.” 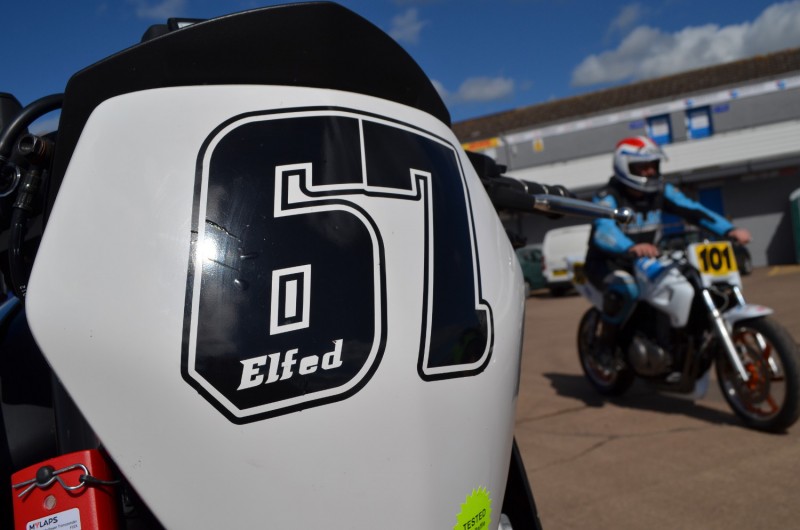 82 Responses to The longest race