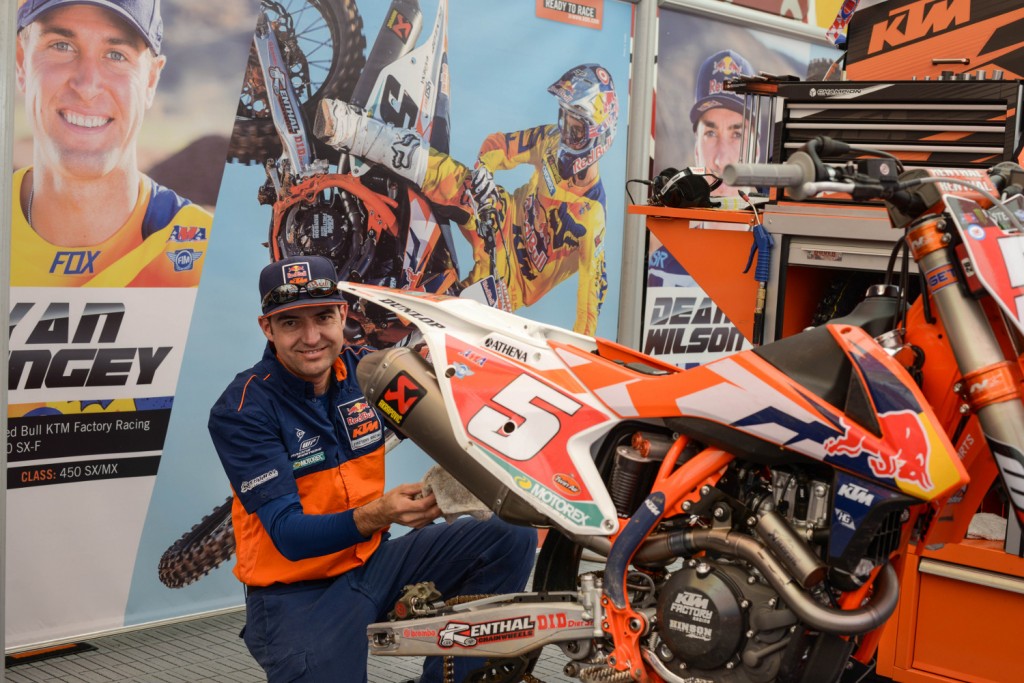 The man behind the spanners: Carlos Rivera talks working for Ryan Dungey

The life of a motocross technician in the USA would be a dream come true for many aspiring young mechanics with a love for dirt bikes, but after talking to recently crowned AMA 450SX World Champion Ryan Dungey’s chief mechanic, it’s clear that nothing good is achieved without hard work. Carlos Rivera talks to the KTM BLOG about life on the road, working with KTM and just how much that title means to him. 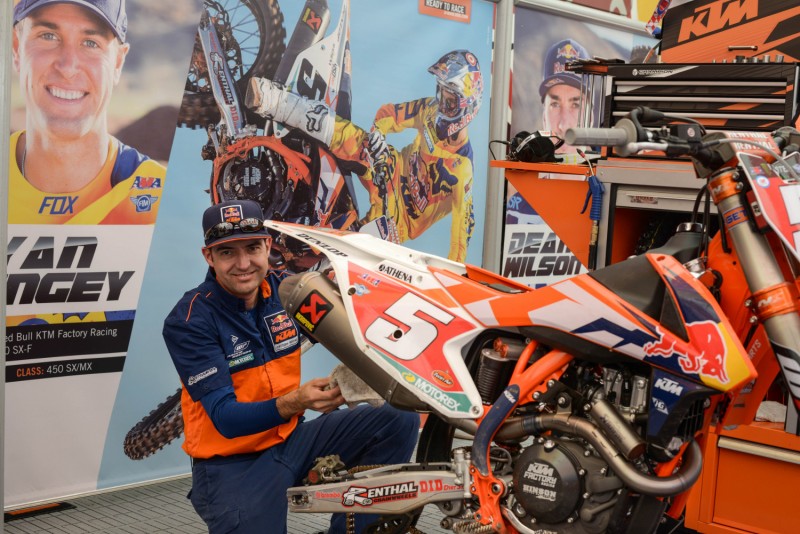 “I’ve been working in the sport around 15 years. I used to ride a little bit, although not at this level, I was like a normal fan. I wanted to be a mechanic, as I’ve always loved bikes, so I moved to the United States from Puerto Rico and from that point I went to Orlando. I moved on and started working in a dealership. I made some contacts and got connected with Davi Millsaps. He was eleven years old when I started working with him. I worked right through his amateur career and also when he turned pro, until he left Honda to go to Joe Gibbs Racing. At that point I came to KTM to work with Roger De Coster.”

Quite often a technician follows a rider through his career as his main man, knowing his mental and technical needs, although some stay with teams and with whichever rider is there at the time. Carlos has a few riders he’s worked with, all of whom raced to a high level.

“Full time I’ve only worked with Davi and Ryan, but in between I also worked with Ken Roczen in the beginning at KTM. It was planned for me to stay with Ken but when Ryan came on-board I had more experience with the 450 so it made sense for me to work with him. Basically I worked with a lot of other riders for a few races such as Kevin Windham, and a few other guys, but basically Ryan and Davi are my only full time guys.”

The schedule is a grueling one. The USA is a massive country and with 17 Supercross races plus some twelve races outdoors, then testing and special events, there’s little family time or down time for the mechanics. Life on the road is one that has to be loved for guys like Carlos. A good working team is vital for success and it’s imperative to have a strong structure in place between races.

“For sure it’s a lot of work and a lot of travelling. The day of the race I consider to be my relaxing day. There’s not a lot to do on the bike unless there’s any problems, and if everything goes smoothly we are good. The work really starts the day after the race. We take the bike completely apart at around 7am in the morning, working already until 7pm in the evening. We have to strip the bike to get it ready. We clean the semi, get everything organized for the next event and then from that point we go to the hotel and from there we go back to California.”

“Back at base we work on the practice bikes and work on everything for the next event. We usually get one day off the day before we fly to the next event, which is usually Wednesday or Thursday depending if we have a press day, and then we continue on the same rotation. Behind the scenes there’s a lot of work too because we have a lot more than just the race bikes. We sometimes work from 8am until midnight. It’s a lot of hours and really race day is the relaxing day.” 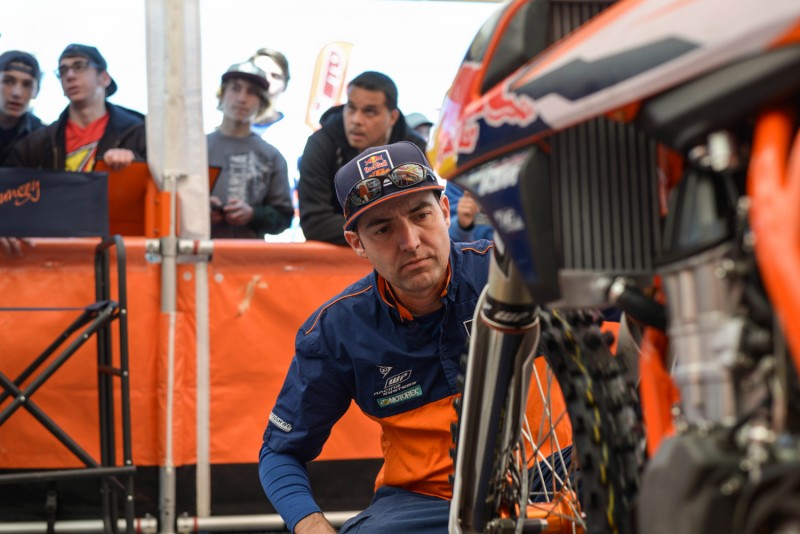 Since Roger De Coster’s arrival at KTM, plus a stronger infrastructure to support racing in the USA, a solid program and a good team has been built. Carlos explained that he worked with Roger in the past, and had a good relation from the beginning. He talks about how Roger is an amazing person, an unbelievable machinist and someone he can learn from every day. It’s an ‘advantage’ to work with someone who was racing before Carlos was born, so when he was asked to go to KTM to work with Roger again there was certainly no hesitation. 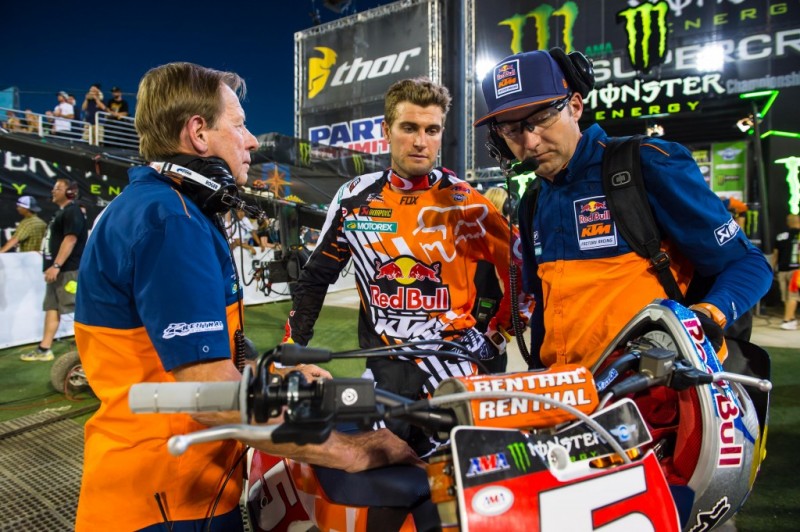 The improvement of resources in the USA has been felt throughout the motocross side of KTM, especially as Supercross is raced under the homologation rule. A good serial bike is needed to win titles, and with the main prize in sight, the connection between the R&D in the USA, which is ever evolving, and the experts in Mattighofen, plus global feedback from Motorsports has enabled KTM to vastly improve its overall package for the USA scene.

“It’s been hard work, but they say hard work pays off. We certainly have worked hard. Roger has put a good crew together – he has such good ideas, and KTM is so good to work with. Headquarters have been so awesome with us; I’ve worked with other manufacturers and the things that come here and how quick they can make stuff is unbelievable. I think the combination of Roger and the guys in Austria has made it a success because they’ve been able to provide what we need and what we request; I believe that’s a huge part of helping to win the championship.”

“The factory bike of Ryan has much stiffer suspension in comparison to stock, but the stock bike is amazing. The feel of the bike when you get on it is really nice – just getting on it you can feel really comfortable, you feel at home on it. The Factory Edition (sold only in the USA) is a homologated bike, it’s exactly the same as what we race apart from our suspension set-up is different for the demands of Supercross. For the US market you have to have a good production frame and package, as that’s what we have to race. So far it’s the best bike I’ve ever worked with.”

Another important perspective is to have a good working relationship with the rider. Carlos explains how humble Ryan is as a person and how he is good to work for. He concentrates on finding a nice set-up how Ryan likes it, as he believes it should feel like a good pair of new shoes when riding a bike – it should be perfectly fitted to the rider. A business approach is required on race day, but the fun element is always there, although both rider and mechanic work incredibly hard for the sole aim of winning, which of course was achieved with the 450SX title for the very first time in 2015. 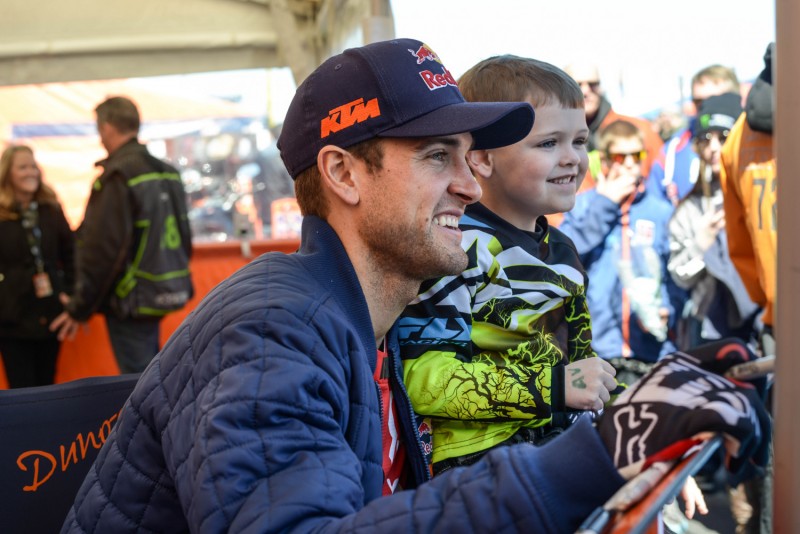 “Winning the championship and especially for KTM, to be part of that was a big thing. You can win the championship for the first time only once, and we did it. We were the first group to build a bike and win a championship for KTM, so no-one can break that record for Ryan, me or any of the crew, as there won’t be another first time. It was a big goal in my own career and still sometimes it’s sinking in. We’re hoping for more, we’re not stopping here, and we’re going to keep working hard because we are going to keep fighting to win more.” 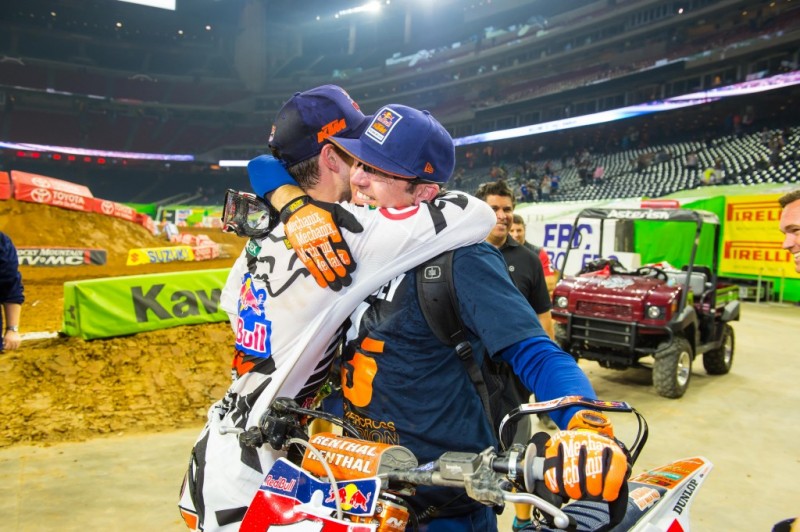 It’s an intense schedule that requires full dedication to be part of a factory team that’s striving to add to its win list on a week-by-week basis, but Carlos clearly enjoys his work and the atmosphere in the team, although riding himself is almost out of the question.

“Honestly this job needs 100% commitment. Maybe I can ride one time a year for a couple of hours. It’s very hard with all the travel, and I have a family, so I need to be there when I’m home. It’s not fair for me to be off work and go ride dirt bikes. But I love what I do. My number one priority is to work on the bike.”

“Never give up, be committed and basically you have to work hard. It’s not easy as everyone would be doing it, but you can do it if you want it bad enough.”

40 Responses to The man behind the spanners: Carlos Rivera talks working for Ryan Dungey