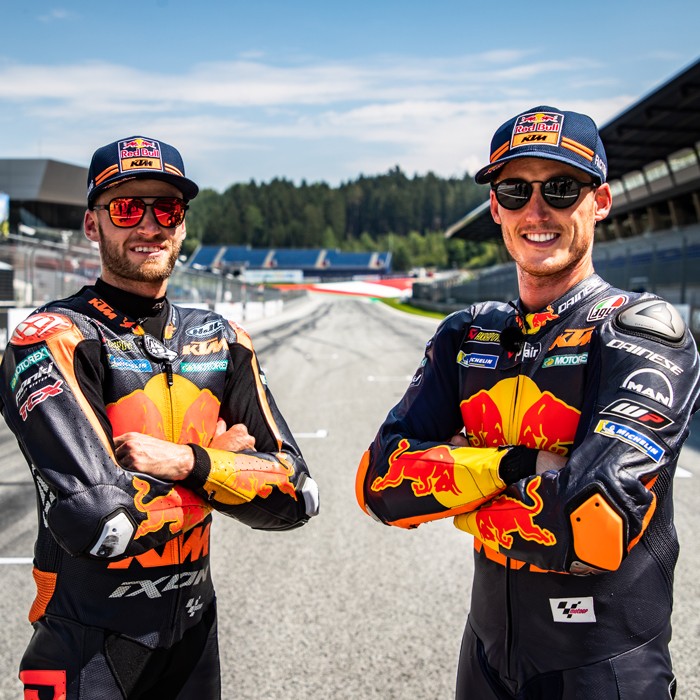 What do Pol Espargaro and Brad Binder see and use on their dashboard and handlebars when in full flight with their KTM RC16s in MotoGP? We decided to ask…

Thankfully, MotoGP is not F1. The riders do not have a set of controls equivalent to a small aircraft but the KTM RC16s are still instruments of outstanding motorcycle tech and engineering. They are two-wheeled racing machines that can be fine-tuned to enable a consistent lap time gain of tenths of a second. Physically, Pol Espargaro – a rider who has been with the KTM MotoGP project from the first Grand Prix in 2017 and Brad Binder – a 2020 rookie in the Red Bull KTM Factory Racing crew who is learning the demands of the premier class and the equipment it entails, both have major input for the behaviour and performance of the RC16 with their riding, but there are some essentials they need to hand.

Brad Binder: It’s quite self-explanatory. I’ve got my throttle, brake, kill switch and the neutral lever, which I will hit when I come into the pitlane. The lever is like that so it’s harder to hit it and send the bike into neutral when you’re on track.

Pol Espargaró: We obviously have so few buttons on the right side because my hand is busy with the throttle. For me the position of the brake lever is not super important. It doesn’t need to be in the perfect place but what is important is the feeling of the lever. It needs to be spongey and not far away. My fingers are not so long. I need a ‘soft’ feeling on the lever and I have it quite close to the bar.

Brad Binder: I’m not too fazed with the type of handlebar grip I have. Last year in Moto2 I used slightly thinner ones but on this MotoGP bike I’ve gone a bit thicker. It feels a bit strange in the beginning…but you get used to it so quickly.

Pol Espargaró: We played with a lot of grips in tests. With my previous manufacturer in MotoGP we used one that was a bit too hard and I had problems with my hands. I had to put on a lot of tape. When I moved to KTM one of my amazing mechanics was proposing different grips in the end we settled on one that has a gel inside. It’s a bit bigger but even if I’m riding for three days in the heat of Malaysia my hands don’t suffer. It’s a big improvement.

Brad Binder: I don’t really look at the colours anymore, I just know the order the buttons are in: the top (red) is engine braking, middle (orange) is for traction control and the third (green) is the throttle demand maps. We also have the pitlane limiter (black) and the top one (blue) is launch control. We often have to play with the buttons during the sessions to get some more information for the guys to set up their electronics. It is one thing that has been difficult for me to adapt to: remembering what I have to switch to and when.

Pol Espargaró: Arriving to KTM the button set-up was different compared to the other bike I’d been riding. I had to get used to them, train how to use them and use the tests to experiment with them. The adrenaline is going during the race so to press something during a fast lap can be tricky. I think it is something ‘automatic’ for me now and, to be honest, it has to be.

Brad Binder: I haven’t played much with the engine braking because I tend to find we have it set up quite well from the beginning of a weekend. Often, we play with the TC and the throttle maps because you have to try more power in some places on the track and less in others. You try and set it all up through a Grand Prix weekend.

Pol Espargaró: Long corners can be a moment to change the buttons. When you are leaning over and on the throttle you have time to push one, especially during practice compared to a race. I don’t need to look at them to press. I know the position. But for sure it is better to do it on the straight. That way you avoid mistakes and often in a race you are fighting with other guys and are under stress. You can make errors at a critical part of the race like going up with engine braking instead of going down. Sometimes you can have a ‘moment’ on the bike and it throws you up and onto the buttons. Mistakes can also happen when you are riding to the grid; you are thinking about many things and you end up pressing the wrong one! Then there are times when you are racing and want to adjust the engine braking but the bike might be shaking and you hit another button. You really need to know the base numbers you start with. If you make a mistake then you pay for it because you need to cycle through to the old set-up.

Pol Espargaró: We are using a different dash compared to the one we had originally. This new one is clearer. Together with the team we set up the display and maybe mine is different to Brad with some colours and signals but the messages are the same. I like to see the split times in the sector. I also like to see the difference; for when I am doing something different or not and whether it’s working. I think the colours are the main difference to Brad’s.

Brad Binder: Everyone has their personal ways of doing things. Some like to see their sector times whereas I don’t, I just prefer the overall lap time and even that can be a distraction sometimes. In general, the dash has everything I need and a whole lot more. To be honest all I look at are the shift lights and my lap time that pops up when I cross the line. The shift lights are on the top. [The ones to the side?] Good question! [laughs] I know when we put on the pitlane limiter – to make the bike stick at the speed allowed for the pitlane – then we have some more lights there, but they are also on when I activate launch control. Basically they are guide lights.

Pol Espargaró: You might see a big ‘1’ on the top of my triple clamp and that’s just to let me know what bike I have. For instance, I might start the weekend on bike ‘2’ but then have a crash and switch to ‘1’ and then we’ll try both in the warm up. It’s just for clarity and for explaining to technicians about any electronic settings. I’ll say I like something from bike ‘2’ but something else from a different setting on bike ‘1’.

Brad Binder: I use the shift lights on top of the dash mostly in FP1 and FP2, after that I pretty much know when I need to shift. You can tell by the sound of the engine as well. When you have a long straight, somewhere like Qatar or Malaysia, then it is always good to watch the lights so you are hitting the optimum moment for shifting. These bikes have so much power so if you short-shift a little bit then it doesn’t make much difference at all. The lights are a good indicator then, once you find your points, you don’t use them too much.

Pol Espargaró: Sometimes we’ll have the Dorna TV camera pointing at us as well from inside the bubble screen. I haven’t had it that often and I’m not sure I like it that much! When you are really happy or really angry that should be a private moment, but I appreciate the fact that the cameras are nice for bringing the people closer to us and showing something a bit different.

6 Responses to The MotoGP™ ‘view’