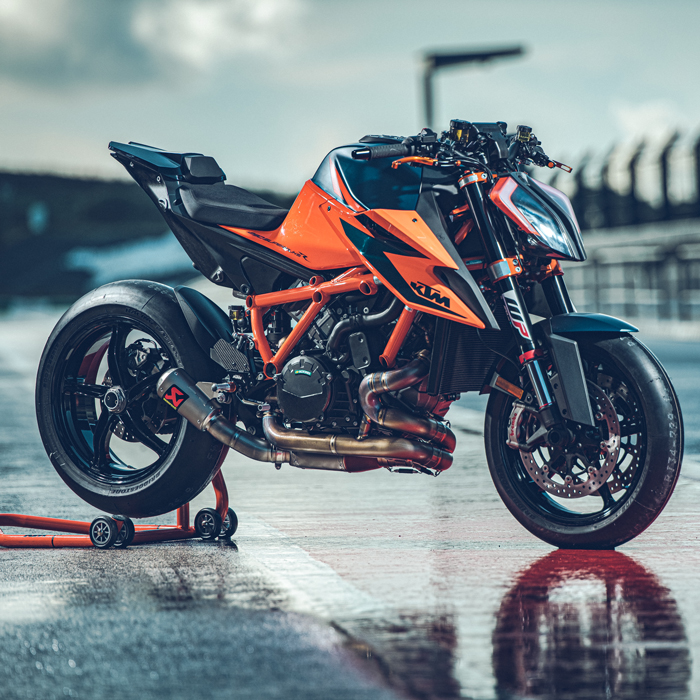 THE NATURIST: KEEPING NAKED WITH THE KTM 1290 SUPER DUKE R

Are Naked bikes still the rage? Looking at KTM’s Street portfolio then you’d think so with at least two new models coming to showrooms this year in the forms of the KTM 1290 SUPER DUKE R and the KTM 890 DUKE R. We asked some key figures in orange – as well as ex-racers like Jeremy McWilliams and Chris Fillmore – if the genre remains vibrant and in-demand as the new decade begins…

We call them ‘Naked’ but, really, they are definitive motorcycles: the way bikes used to be and have always been since the 1980s boom towards sports machines and the notion of the superbike. The fact that virtually every major manufacturer has a significant interpretation of ‘Naked’ is indicative of the choice and versatility that riders want on crowded and patrolled roads.

For KTM the ‘Naked’ motorcycle is still utterly relevant. On the KTM website there are options for Travel, Sports Tourer, Naked, Supermoto and Supersport but in 2019 the DUKE range accounted for 100,000 of global sales (almost 40% of the total) with the accessibility, young appeal and build quality of the KTM 125 DUKE hoisting the bike as the best-seller in the range.

2020 represents the fourth year that the manufacturer will be present on the MotoGP grid and with four works bikes they already equal Yamaha and Honda and surpass Suzuki and Aprilia in terms of presence. With an emphasis on performance the factory push their 2020 KTM 1290 SUPER DUKE R to the fore. The crazy depth of torque and a brand-new chassis from the overhauled roadster gives new impetus to the ‘BEAST’ tag: a bike without the clothes but very much in disguise as a rip-roaring sports machine if desired.

“It is definitely our top-of-the-range Street performance product,” confirms Head of Product Management Adriaan Sinke. KTM are forging ahead with their belief in Naked bikes. In a dizzying eighteen-month spell of development-and-launch the KTM 1290 SUPER DUKE R now has the KTM 790 DUKE and KTM 890 DUKE R for company.

The Euro5 emission-ready KTM 1290 SUPER DUKE R is at the top of the tree and boasts the kind of output, refined handling (a vastly stiffer and superior chassis/frame concept) and electronics (MTC, MSR, varying ABS, 6D lean angle sensor) to match most 2020 incarnations on the market. Therein lies a paradox: how do KTM continue to fabricate a simplistic motorcycle that provides the sensations, comfort and thrills that customers demand while also hiking the level of sophistication?

“It’s really tough actually,” Sinke admits. “The market demands more technology. For even the biggest Naked bike stalwart you cannot ride them without electronic fuel injection or throttle management… Traction control is becoming more and more of a standard feature and is slowly becoming a must have for daily riding. It is possible but not in an everyday situation. One of the keys with this bike was trying to give the rider the feeling of control more than on the previous model. We have always had quite good traction control, but we wanted the rider to have more depth of feeling, how the power was coming in, that the bike was sliding and it was helping them to drive forward. We wanted them to have that sense of ‘I’m the master of what my motorcycle is doing’. You don’t want a good rider to switch off the traction control, you want a good rider to enjoy the possibilities he can explore by using traction control.

To explore the extremities and advantages of the KTM 1290 SUPER DUKE R, KTM let journalists and testers have free reign around the technical Portimao racetrack in southern Portugal for the official presentation. Circulating the WorldSBK venue opens up the valves. It allows the 180hp and 140Nm potential of the LC8 engine to boom, and the new handling shine throughout the weave of dips and turns. Riders also toggle through the full range of the nine-level Traction Control setting and revitalised Track Mode; innovations that former MotoGP rider Jeremy McWilliams helped refine.

The Irishman has been a key figure in the evolution of the KTM 1290 SUPER DUKE R since the first ‘BEAST’ in 2013. His track work has allowed KTM R&D to examine the limits of the motorcycle and create a stable-and-secure yet thrilling offering for the road. “I think we like Naked bikes because we have a bit more control of them,” he opines. “We’re on top of them, we have more leverage and a wide bar position. You have more torque on this motorcycle than I think anything else out there on the market today. Torque is our friend: when you have that much on tap it makes the riding experience that much more fun. It doesn’t really matter what gear you exit the corner on this bike. We never use second gear here at Portimao. We don’t need it because third has so much push to get it off the corner at any speed. You can become a bit of a hooligan on this and you can also ride it as sedately as you want. There is a lot of variety thanks to the electronic settings. A lot of options.”

McWilliams is clocking laps with another ex-Grand Prix star, Alex Hoffmann and also American Chris Fillmore, who used to compete in AMA Superbike with the RC8. “When it comes to Naked bikes then it depends on your goals with motorcycling,” Fillmore says. “If your goal is not to be a full-on racer then they are ten times more comfortable than a sportsbike on the street. They still work unbelievably well on the track and I was getting within 2-3 seconds of my RC8 lap-times on the old generation of the SUPER DUKE and this version is even better thanks to that stiffer frame. It is like a comfortable superbike: you still have all the technology and the performance, but everything is geared more towards being comfortable on the street…although, honestly, you don’t lose that much for the track.”

The idea of the KTM 1290 SUPER DUKE R on a circuit seems a little alien, especially considering the latest fad brands have towards the production of high-performing and highly expensive track models in the last half a decade. The KTM 1290 SUPER DUKE R does not disappoint however and can be tweaked to get as ragged or as assuring as any rider wants. “If you are a good rider then you can be very fast on a SUPER DUKE R,” promises Sinke. “The chassis, torque and brakes: it’s a really good package. We hope we are able to convince a few track riders to pick it up and I’m sure we will. You will ride the SUPER DUKE R on the streets but if you want to go to the track then you won’t need two bikes.”

The new KTM 1290 SUPER DUKE R’s engine numbers are eye-widening for a v-twin. For ‘scratching’ or a competitive environment then it’s a clear asset. But are those figures still appealing for customers in 2020? Fillmore believes so. “I think riders are still hung up on horsepower because it is an ego-thing,” he smiles. “My father owns a bike and he had to buy the fastest, biggest, latest, greatest and, for me, I think if people took a step back and even looked at the midweight category – I think the KTM 790 DUKE is one of the best bikes for everybody – then their experience would be just as good as any sports bike. The KTM 1290 SUPER DUKE R is great because it has all the torque and all the power but it is all very manageable with the electronics. I think people are too hung-up on a number. On the street there is always a speed limit. This is one of the best streetbikes because of the torque. At 3000rpm you are immediately in the meat of the power on this bike. You don’t get to use much power on the street and the torque gives you that excitement instantly. In comparison – inline fours – you have to be screaming and already going 100 to get into the power and where they pull at the top end. This is a bottom-end fun.”

“I think in our hearts there are still a lot of ‘youngsters’ out there who have grown up, made their money and can buy these types of bikes,” concurs Sinke. “The fun factor of controlling something with so much power is still there, and it will take quite a while before that attraction dies down. In fifteen years we might have electric superbikes but I think that fascination with power and speed will always be present. Being a bit of a bad boy and being a bit naughty almost defines a bike like this: something powerful but playful at the same time.”

In that sense KTM almost seem duty-bound to fashion something as radical and extreme as the KTM 1290 SUPER DUKE R. “Yeah, probably,” Sinke confesses. “The bike is ‘in-your-face’ and that is our brand in every possible way. It is amazing to ride this bike and be shot out of the corners. Do I need this bike? Of course I don’t. A KTM 790 DUKE has plenty of power to tackle any mountain road…but to have that power and torque under your right hand is really a lot of fun.”

A Naked bike doesn’t hide much, and in the case of the KTM 1290 SUPER DUKE R then even less with that edgy and purposeful styling but the truth is that there is a vast world of experience within, and with the slightest touch of that right handlebar grip. That mystery and sense of discovery is what keeps KTM striving towards the ‘ultimate’ Naked bike. They have hit the mark with the 2020 KTM 1290 SUPER DUKE R: a creation with MotoGP nuance drip-feed into its DNA and an influence that trickles down into the rest of the DUKE line. “Naked bikes are almost the epitome of what a motorcycle is about,” concludes Sinke. “We sell immense volumes of the small DUKEs so there is definitely a big market for it. It doesn’t have a big fairing or a bunch of stuff that you don’t need on a bike. It’s an important market for us and it is definitely continuing.”