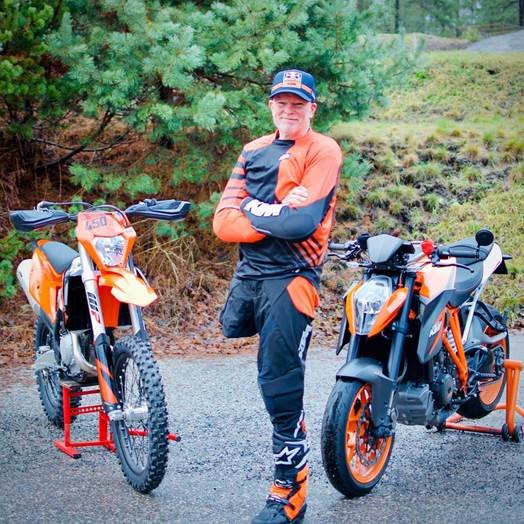 THE ONLY WAY IS FORWARD – THE JOACIM BOIVE STORY

Being READY TO RACE means so much more than a brand slogan. While it does perfectly describe the KTM range of performance products, it also defines the KTM mindset. And the best way to explain what that means, is to tell Joacim Boive’s story.

William Arthur Ward once said that adversity causes some men to break. But causes others to break records. This is true of Swedish-born Joacim Boive, who proves that life is worth living – regardless of how challenging it might be.

As a teenager, Joacim was diagnosed with a very rare type of cancer that affected the bone in his right leg. Sadly, doctors took the decision to amputate the leg, leaving the young Joacim with a disability many of us could never imagine living with.

However, ‘disability’ is not a word Joacim has in his vocabulary. On the contrary, this was but a mere irritation to him – an obstacle that needed to be overcome.

As a young boy, Joacim was – like most of us – infatuated with the world of motorcycles. At that stage, his only wish was to turn 15 to be allowed to ride a 50 cc moped. But, due to his situation, and the need to be mobile, he was able to get an exception from the Swedish government to ride a moped at 13 instead.

Joacim says it was the promise of a brand new 50 cc that kept him going while he was getting his cancer treatments. Of course, he says, this motorcycle went from being a stock standard run-about to a heavily modified street racer. This also led to his fair share of crashes. But, he loved it and rode it all year round – even fitting studded tires to allow him to keep riding during the icy cold winter months.

Naturally, when he turned 16, Joacim demanded an upgrade to a 125 cc. Not long after, a brand new 125 cc found its way into the family garage.

Herein lay his next challenge.

Since no one in Sweden at that time had ever taken or applied for a motorcycle license with only one leg, the authorities were somewhat skeptical. It didn’t take long for Joacim to find a loophole and convinced the authorities to allow him a special restriction that would allow him to maneuver the rear brake any other than using his right foot.

Obviously, this was long before thumb brake systems were available, and required some inventive thinking to find a workable solution. This meant many tireless nights in the workshop for his father, who eventually perfected a solution consisting of a converted rear brake with a pedal behind the footpeg on the left-hand side. Victory!

Now, there was a “small detail” of bringing his crutches along with him. This led to another late night for his dad, with the end result being a pair of foldable crutches that could easily be kept in a backpack – which Joacim still uses to this day!

As he got older, the need to step up to bigger, faster machines became an obsession. But his plans to upgrade were nearly stopped in their tracks after he crashed his 125. His parents argued that, if he decided to keep riding, he should look at an offroad motorcycle which, they thought, wouldn’t be as fast.

Despite many complaints that he would be the last to get anywhere on account of all his friends riding sportbikes, his parents persisted and they eventually settled on a slightly used 650 cc dual-sport machine.

It wasn’t the fastest bike on the block, but that didn’t matter – it could wheelie. And pretty soon, he was hoisting the front wheel for miles at a time, despite not having a traditional rear brake.

As the years grew on, Joacim honed his riding skill, becoming more and more proficient. This led to him popping his KTM cherry, buying a brand new 2005 KTM 640 LC-4 ENDURO with no expense spared, Joacim quickly converted the LC-4 ENDURO into a SuperMotard with 51 HP and massive torque.

Joacim crashed the modified 640 into a guardrail, breaking his back in three places and shattering his pelvis. His motorcycling career looked like it was done.

It took 12 long years for Joacim to finally get back onto a motorcycle, and it’s at this point where this story really begins.

Now, with an impressive brace of KTM’s finest in the garage, namely 2014 KTM 1290 SUPER DUKE R and a freshly baked 2021 KTM 300 EXC TPI ERZBERGRODEO limited edition, Joacim is taking on his biggest challenge yet.

A few years back, Joacim, with the support of his loving wife, decided it was time to take a step into competitive motorcycle racing. He had an idea to attempt something that hadn’t been done before.

Motivated by the likes of Manuel Lettenbichler, Toby Price, Billy Bolt, and Graham Jarvis, Joacim decided to look at the enduro world for inspiration. “Enduro! How hard can that be?!” he thought.

KTM Scandinavia was quick to take up the challenge and supplied Joacim with a 2021 KTM 450 EXC-F SIX DAYS to get him going. However, having never ridden offroad on a motorcycle before, Joacim found the going pretty tough.

In the rough and tumble world of competitive enduro racing, sitting down on the saddle is not an option. So he had to learn to stand on the peg – yes, only the one – and prioritize balance over speed.

Being a pretty fast rider, Joacim thought he’d be able to keep up, but says now that his first few outings were humbling, to say the least. He had to learn a lot but credits enduro riding with expanding his motorcycling horizons, opening up a whole new dimension of riding, and not to mention massively improving his fitness levels. The people on the trail have also been a great help, full of advice and support, he says.

When asked about his training regime, Joacim says he has to push himself harder in his older years. When he was younger, he could simply eat all he wanted, do very little, and remain in shape. These days, however, he has adopted a healthy lifestyle, being a vegetarian for the last 8 years, and a training schedule that would make most men lightheaded.

During the weekdays, he runs a solid 5km every morning, with some diamond pushups, pullups, and balance drills sporadically throughout the day. Three days a week are focused on core exercises, with strength work coming courtesy of kettlebell swings. Winter, he says, affords him the opportunity to shovel snow – which is a surprisingly good core workout. On other days, he rides his mountain bike in the forests around his house and does some fast laps on the KTM 300 EXC.

Speaking of which, Joacim says because he started his enduro journey on a 4-stroke, he had the benefit of engine braking and has only ever used the front brake in the last 30 years of riding. However, since moving to a 2-stroke, with its low to non-existent engine braking characteristics, there have been a few modifications to be done. Joacim’s KTM 300 EXC TPI ERZBERGRODEO is mostly standard, except for the footpegs and a hand-operated rear brake.

His plan for 2021, is to compete in the Swedish Enduro Classic – which consists of three races, with riders having to complete at least three laps per race, with the first race taking place in Stångebroslaget in July. The Ränneslätt round will follow in September, with the grand finale, the Gotland Grand National in October.

The Gotland Grand National is the world’s largest Enduro motorbike race, with each lap being 20 km long and is a real test of stamina, man, and machine.

Following that, Joacim also plans on taking part in the Bahusian Extreme Enduro race, which will bring along a whole new set of skills, which he says will help with his regular Enduro riding as well.

And he doesn’t plan on stopping here. Joacim has already hinted at competing in Supermoto as the first person to compete at a national level with only one leg.

Asked what advice he has for anyone facing similar obstacles, Joacim has a simple viewpoint –

“It’s all about choice. Life is a matter of attitude and how you choose to look at things. You either consider a problem to be an obstacle you can’t get over. Or you look at that obstacle as a challenge you can overcome. At the end of the day, there is only one way…

…and that is forward.”