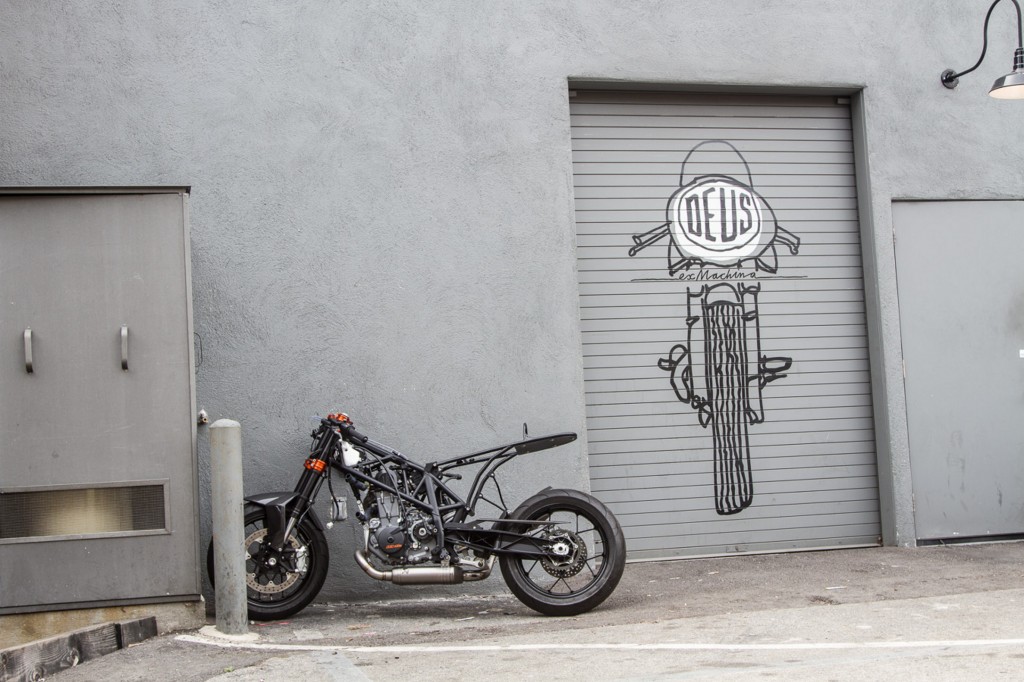 It is not often that somebody decides to chop a KTM into pieces in search of a different look. The brand has always seemed to differentiate itself from the competition in terms of image and style and particularly in the United States where it automatically fits into the niche of European technology. 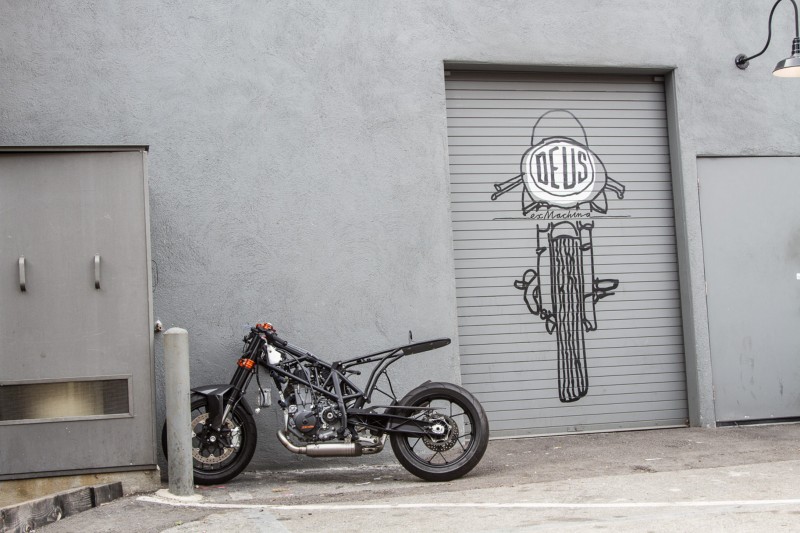 Toiling away in the compact workshop of the Los Angeles branch of Deus Ex Machina 55 year old former racer Michael Woolaway is a high profile example of somebody that likes a little more ‘tang’ in his Orange. Woolaway has gathered credence and status in the past three years at Deus for his custom creations, blending race retro, surf culture and California cool into a series of bikes that have helped the company become one of the premier names in the resurging café racer/dirt track scene.

As a keen rider and former road race and offroad competitor ‘Woolie’ has an affinity with the Mattighofen motors. “As a kid it was the Pentons … I always wanted one!” he says. “I didn’t actually get my first KTM until 1994 and it was not a big brand in the U.S. back then. I’ve always liked chrome-moly and they are still using those frames and I first fell in love with their bikes back in the 90s.” 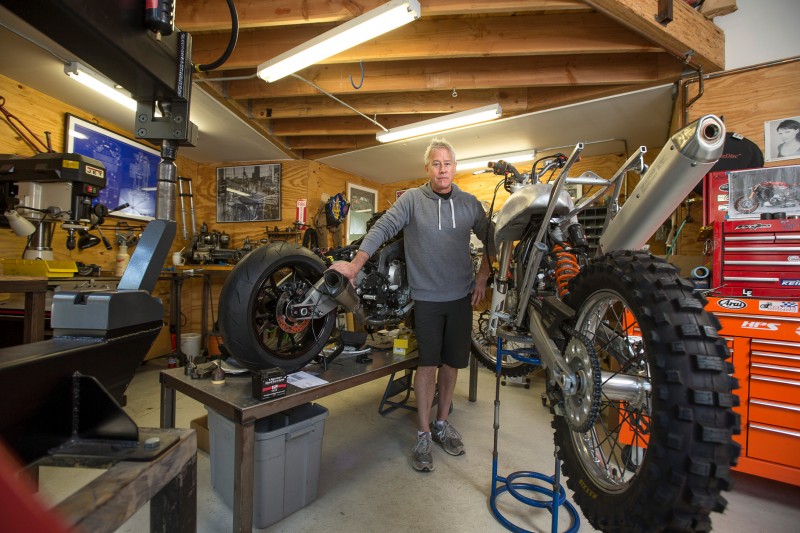 “KTM is still exotic and different and they go their own route,” he explains. “They don’t follow trends and are not influenced by other manufacturers. In my opinion they are a lot smarter by sharing chassis, bodywork and components among many models. As a builder I find the way the machinery is put together to be quite intelligent compared to others.”

Recently ‘Woolie’ has been able to indulge in a little KTM experimentation. “The owner of this company [the LA branch of Deus Ex Machina which is built around Woolie’s vision and ambition] asked me to build some tier-two kit bikes just over a year ago. I thought ‘KTM is my brand’ so I went down to talk to John Hinz at KTM North America and they were gracious enough to give me a couple of bikes. It was not a collaboration where we were sharing ideas they just trusted me and the work.” 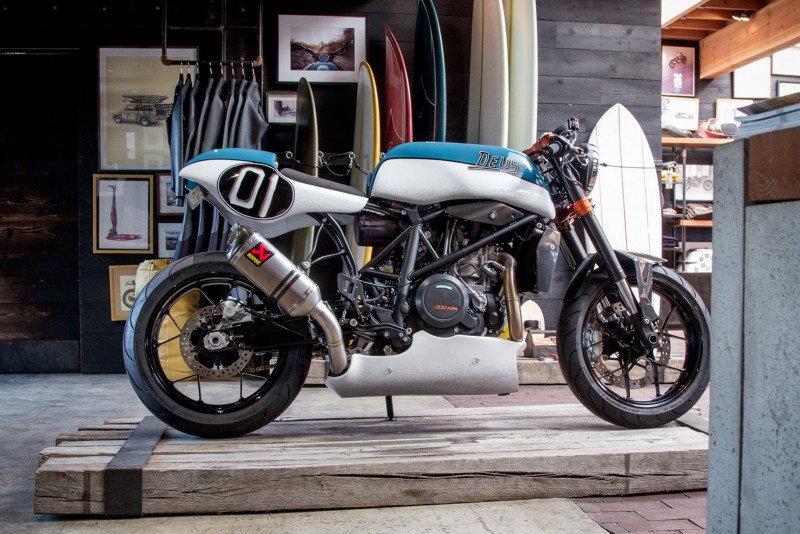 The stunning remoulding of the 690 DUKE was the result. “I like KISKA’s design work with the KTMs: very edgy and angular,” he says. “But on the 690 kit-bike I went the opposite direction and made everything round and soft to try something a bit different. It is like 80s Superbike style in miniature form … that’s what I was going for.”

“The priority with the 690 was to find a middle ground of style and functionality while using the stock components as much as I could. I had to make brackets that move the foot controls back three inches and up a little bit but I still kept the original parts to save costs,” he goes on. “That bike took me about two and a half months and now the first three sets of tanks and seats are made. I have ten sets of chrome-moly sub-frames and brackets and we’ll have ten kits overall to start with. I think a few will go to Europe. Our friends in Amsterdam want a couple. It will be available in about a month.”

The 690 was given the ultimate rolling test by ace AMA KTM Superbike racer Chris Fillmore at the Barber Motorsports Vintage Festival in Alabama four months ago. 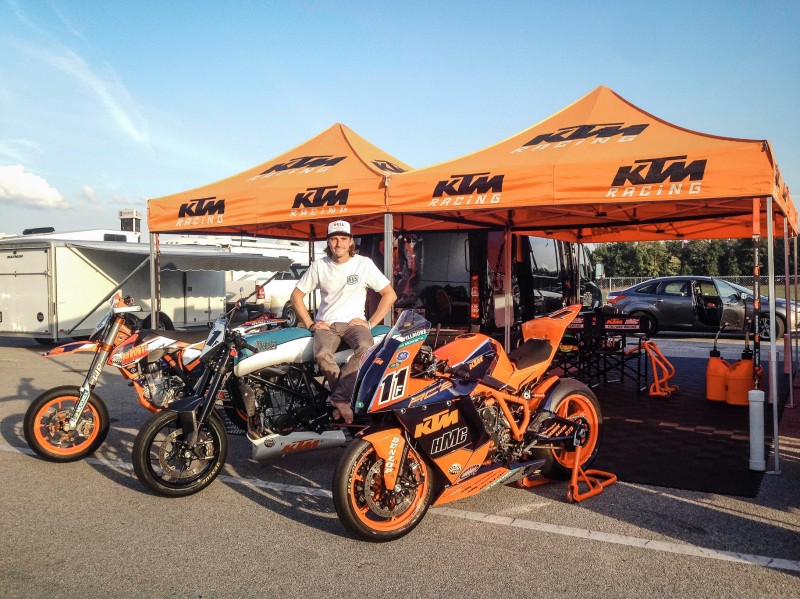 “You could definitely call it a perk of the job!” the California-based athlete said meeting up with us at Deus and chatting over a coffee. “I’ve been a fan of Woolie’s work since I came here for the opening and we hit it off. When he said he wanted to do a KTM in a Café racer style I was like “I’ll race it!” There was no real plan but I had heard about Barber [Vintage Festival] the year before from some friends who said that 70,000 people would go to this thing so I wanted to check it out. I wanted to see why the crowd was so big at a Vintage road race and this project seemed to be the perfect platform for us to wheel out something at Barber.”

“I talked to the team and they ended up race prepping it for us,” he recounts. “It was shipped to HMC who made it ready for the weekend. It was a funny story actually because the team are totally focused on speed and were asking me if they could change or alter it but I said: ‘No, we just race Woolie’s bike’. They didn’t believe anybody would like it but I think it had more attention than any other of the motorcycles there just because it was different and a KTM. Woolie had taken a modern bike and put a different look on it.”

Fillmore led the race until a technical glitch forced him out but clearly revelled in the experience. “It was quite a bit different going from purpose built race bikes to a 690 DUKE … that wasn’t even the ‘R’ version,” he says. “It took a couple of laps to get used to but it was super-fun. The power is really mellow. I was having a ball doing wheelies and trying to back the thing into turn 5.” 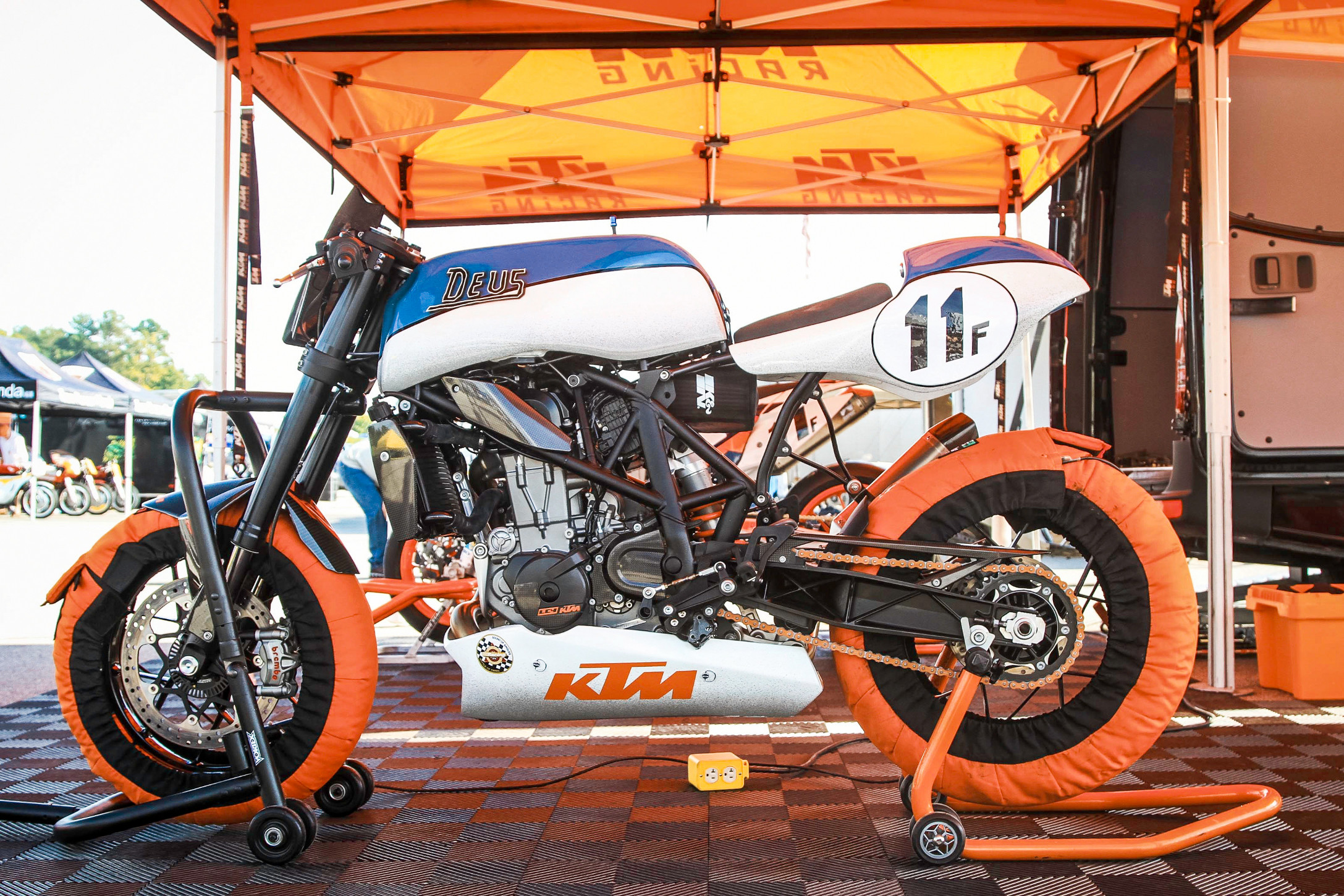 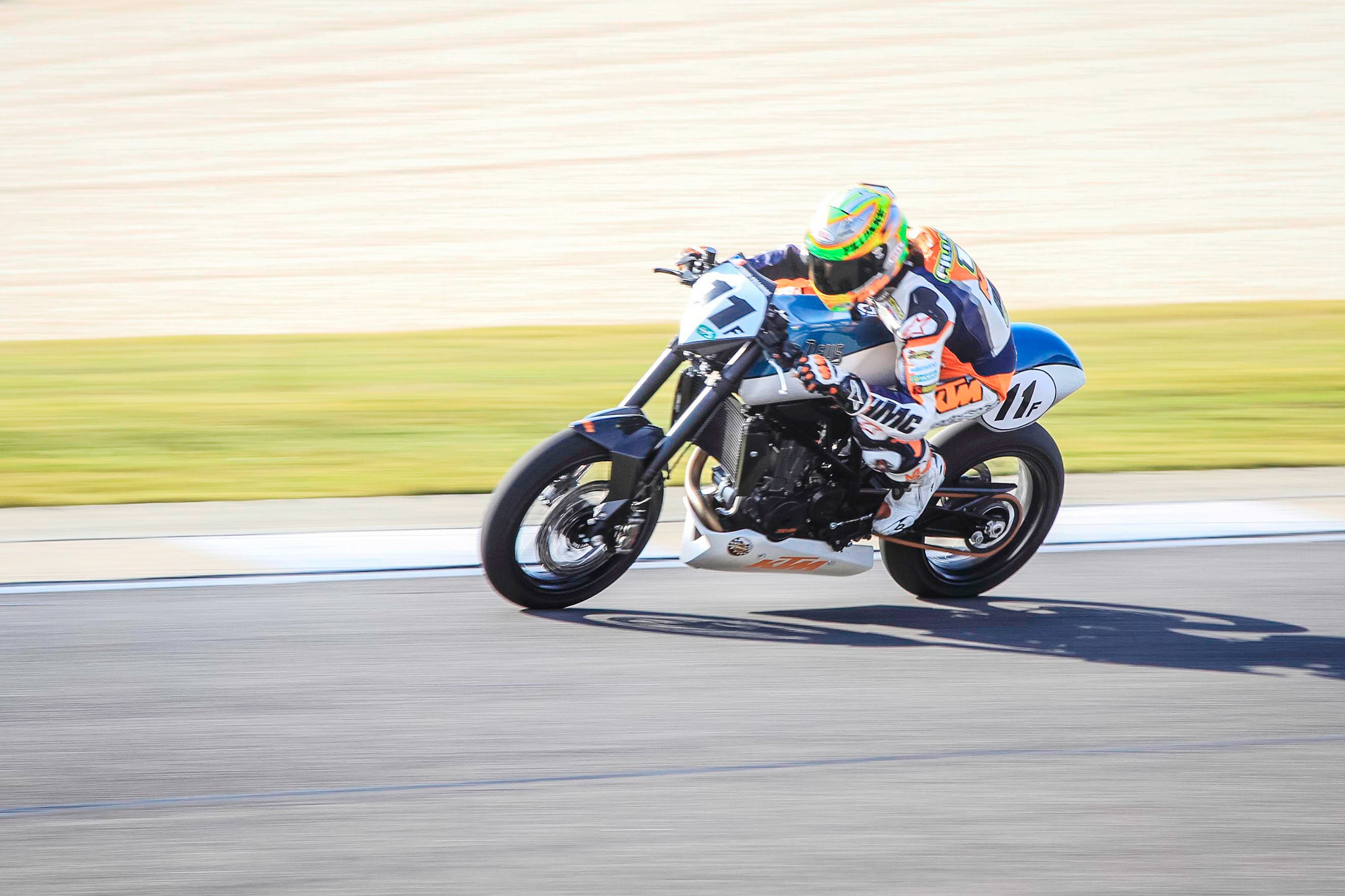 The 690’s alternative version’s fabricator is an extremely busy man. Woolie gets to mix requests through Deus, customer bespoke motorcycle jobs and his own personal projects. He divulges a bit of the process that ultimately transforms the form and soul of a motorcycle by shaping and chopping: “I’ll block everything up and sit on the bike. I’ll put clip-ons there, blocks under my feet and look where I’d want my body to be and where the balance of the bike feels good. I start that way. When I build bikes for customers then I will get them to come in at the point where I am starting to put on controls. I’ll put the client on the bike, position them and think about good places for the pegs, check clearance and all that stuff.”

“Many people [builders] just stick to one type of bike but I like to mix everything up completely, from BMWs to KTMs to whatever.” The next personal venture involves another KTM and is an even more radical direction than the 690 Hero. Here he explains: “The idea was to build a ‘surf adventure’ bike that can do 200 miles down to Mexico and the ocean. We have a lot of people in southern California that like adventure surfing and will do an eighty mile ride-in and then hit trails down to the break.” 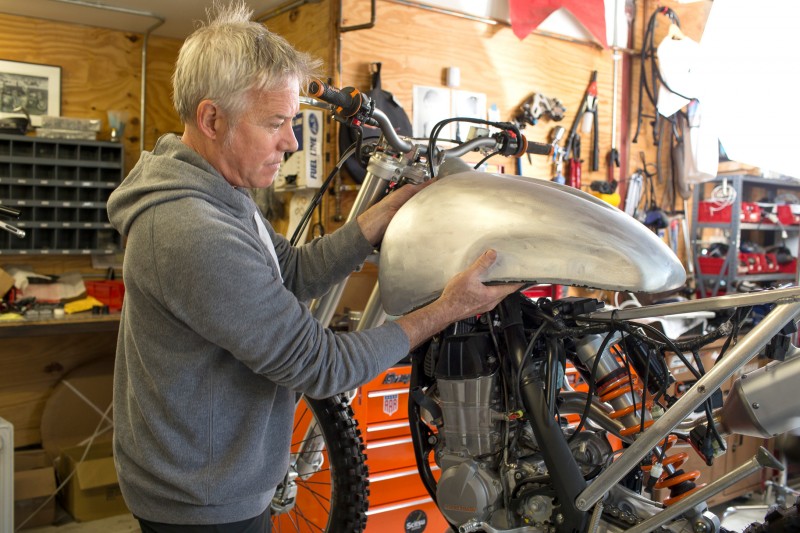 Woolie poses for photos with the guts of a 500 EXC where he is in the process of sizing-up an abnormally large tank: an early clue to the bizarre direction for the offroader. “The complexity of that build actually involves the tank,” he gestures. “I needed a big one (for fuel capacity) so I made that and now the next step is riding position because it means being up on it. With the tank being 1100 aluminium then it is soft. By the time I get the seat made and fitted I would have ruined the tank so I needed a mould to take it onwards.”

“For sure it will look quite avant garde. It will be pretty soft and have a ‘30s‘ feel to it. I want to put a lower sweptback bar for something a little more comfortable. The nice thing about a KTM is that it is a race-ready package so it has fantastic wheels, brakes, suspension, chassis, geometry, controls and all that stuff. The advantage is that you don’t have to change much. I am just going to work off the original platform and look at things like the tank, seat and mounts for a surfboard rack. The only unfortunate part is that I’ve got about a year’s worth of work ahead of me before I can really get back on it.”

Looking around Deus and then hearing Woolie talk about motorcycles and KTMs like they are part of a building set gives a very organic feel to biking, and somehow reminds you that the sensation of getting on two wheels is a strong definition of liberty. These bikes are works of art but are crying out for someone to give them a quick blast. Maybe Deus is one of the last places you might expect to find a KTM being given the custom treatment … but then again it somehow feels very right. 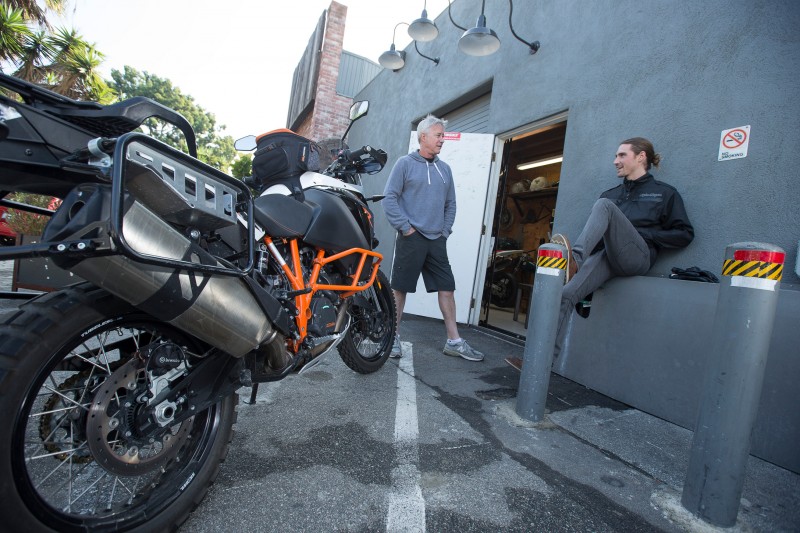