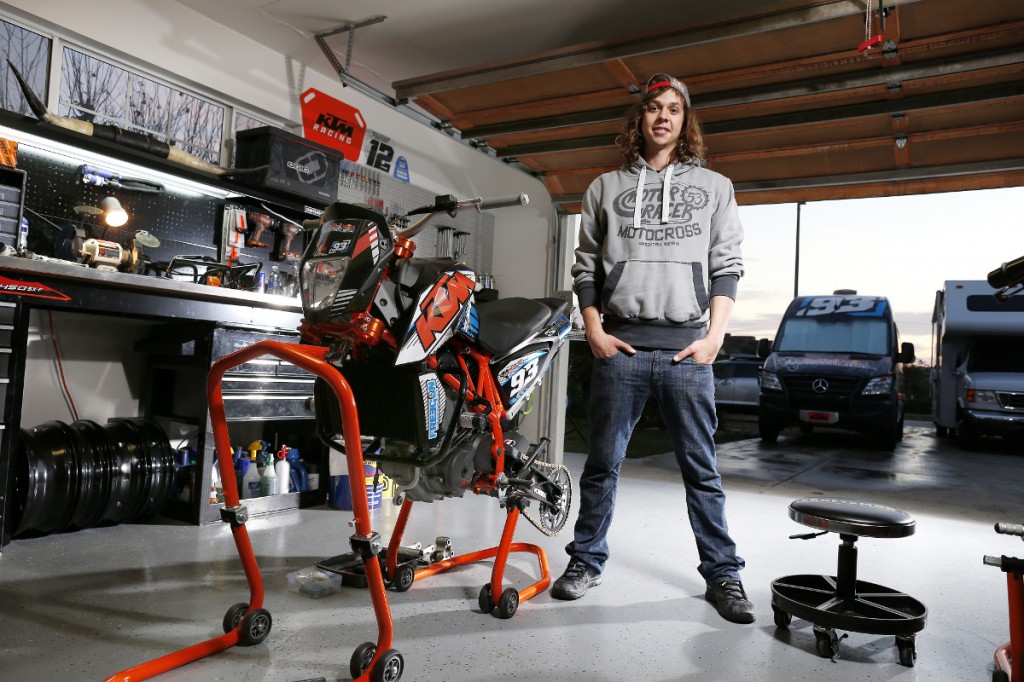 Thought you were pretty handy on a bike? Then think again. Aaron Colton is in a different league …

KTM have the tools and in many cases they certainly have the talent. While the Cairolis, Dungeys, Meos, Blazusiaks and Millers grab headlines in their respective sports at any one time around the world there are those that gas a slightly different line in orange; usually one that is just as eye-catching but perhaps not so prevalent in the headlines.

So, here on the KTM Blog, we are happy to throw the focus onto American Aaron Colton. Any fans of streetbike freestyle will know the name. A prodigy on two wheels since he wheelied onto the scene with freakish talent, a large set of balls and a taste of flamboyance as a fourteen year old, Colton is the KTM 690 DUKE Red Bull darling of stunt supremacy. The king of no-hand wheelies, a plethora of tricks on two wheels (and often one), abuser of rear wheel rubber, drift dancer, a showman, competitor and overall a splendidly amiable guy who we meet at his abode in Santa Monica, California late one afternoon in spring.

Colton’s act is as measured as his garage is spotless. Here is a 22 year old – already almost a decade in the game – that takes his act and ability incredibly seriously. Colton competes in events like the XDL Sportsbike Freestyle Championship as well as hauling his sensory-attacking Red Bull show on the road across the U.S. and the world. At the time of writing he is wowing a whole new set of fans over in the Philippines (check out his Facebook page – over 1 million likes – for some cool pics) and could be on the FIFA World Cup stage in Brazil as part of more international dates. He also has an ambitious project lined up in October in New York that could be make for one of the most spectacular motorcycling videos you are likely to see. More on that later.

After Ray Archer has worked some magic with his lens and lights of Aaron and the 690s that he has been throwing around for just over a year we move into his living room for a chat. It is clear that despite his youthful looks and appearance that we are talking to an immensely skilled and experienced rider, even at his tender age. The former protégé of Christian Pfeiffer, originally from Minnesota but now residing in LA for part of the year with fiancée Daniela, has dabbled in practically every bike sport discipline to reach the status he holds today as one of the ‘advancers’ of Freestyle. 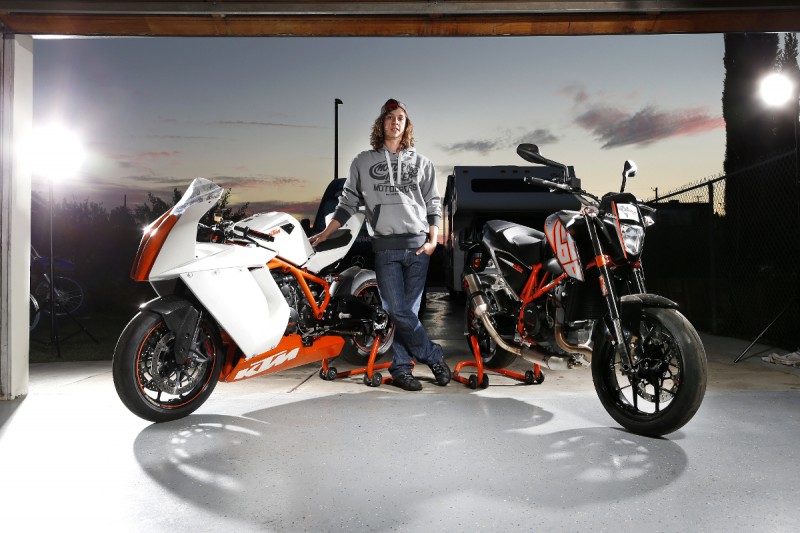 As a Freestyler, competitor and part-time racer are you like a ‘jack of all trades, master of none’?
“Kind of! I got on a street bike back in 2005 when I was thirteen and started doing some freestyle and then road racing in 2007. I got my AMA licence and did some Supersport rounds at the end of the decade. I was still doing freestyle and then went into flat track and got my AMA Pro licence there. I’ve entered many different spheres of motorsports and it has helped me to become well-rounded, so if it comes to something like a Baja ride-out then I can hit the trail with a good group. I’ve diversified and a ‘jack of all trades’ is something that I strive for because I want to be the best possible motorsports athlete.­­ I think my forte has to be freestyle though because I have put so much work into it and have developed bikes and to the point where I am making my own parts.”

What if someone said to you tomorrow ‘you can only ride one kind of motorcycle for the rest of your days’ – what would you go for?
“If I had one choice, I would love to say Freestyle but it has been nine years now that I’ve been doing it for a living. I love it, but if I really just had to choose one then it would have to be off-road and trail riding. That’s my favourite. When I’m on the KTM doing Freestyle it is like the bike is part of me and there are no limits. I did not reach a similar level of euphoria until I started getting better at single-track trails. The only way to go faster is to be smoother and I found it to be the only other type of riding that brought the same amazing feeling as freestyle.”

KTM North America spotted Colton’s appeal two years ago and they finally struck a deal in 2013. Red Bull have been backing ‘AC’ since his surprising emergence as a kid in the middle of the ‘00s. Colton certainly raised a few eyebrows when he ‘stoppied’ into the freestyle arena with the DUKE.

Explain the link with KTM. It’s unusual for your world?
“I’ve had a couple of different factory connections over the years and the one consistent thing is that people from those companies did not really know what to do with my sport. Some athletes have backing that involves a couple of bikes and instructions to chase the results. The thing with KTM is that they are really evolving and I think they are going to use me as an activation tool. I met with them at Lake Elsinore two years ago and the fact that Red Bull and KTM already have that association in sports was a cool part. I think both parties saw my programme as something versatile, especially for KTM who are trying to push their streetbikes worldwide and in the U.S. They can bring a motocrosser or a road racer to a dealership, but I can do my show wherever. It’s been running since February 2013 and been pretty cool; I think I have numbers ’02’ and ‘04’ of the KTM 690 DUKE in the United States! I got a jumpstart on development. It’s very cool that KTM have also stepped forward to help with the singles for my flat tracking. To be honest there is not one rider who is competitive in our sport with a KTM. Internationally the reaction was great but from the core group and the competition here I got the vibe of ‘he’s jumping ship’. A couple of months into life as a KTM athlete I pretty much shut them up and they could see that I was working to develop the bike to make something.”

What about the 690s for all the physics you are exploring on a motorcycle?
“With bikes from other companies there were already parts that I needed to buy to do the job but this time I had to go down another path and design the components I require for the sport. So it took a bit longer to get the ball rolling but it’s a great relationship. The single was hard to get used to! A lot of things I do are based on the low-end power delivery and sometimes raising or lowering the idle point. On a single it is ‘chug-chug-chug’ whereas on a four cylinder it is smoother, like a sewing machine. It took some adaptation after eight years on non-singles and twins! It’s going good and getting better.” 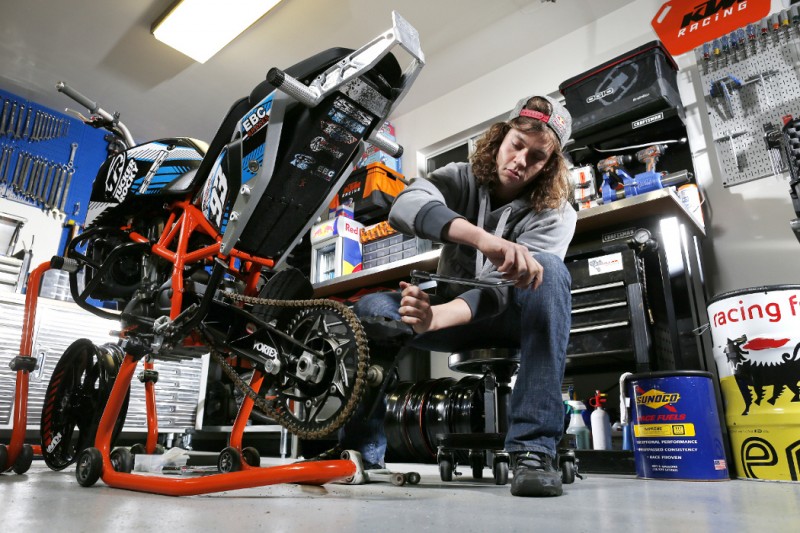 Red Bull have made some interesting projects for you come alive. What’s going to happen in New York then?
“The great thing about the way they work with their athletes is that – within reason – you can set your own goals. You can tell them what you’d like to do, or what you’d like to achieve and they’ll help you get there. I cannot be more thankful for that. I have a video project called ‘Red Bull Night Tracks’. We have already produced one video and I always thought it would be great to continue that, so what is the most iconic transportation system in New York? The subway right? I was going back and forth and looking at the possibilities of shutting down a section of the subway and filming in there. It has been over a year now of having meetings with MTA and I cannot go into specifics yet but we will basically be making a sequel in Grand Central Station through the subway system. I get to own the place for a little while which is going to be ground-breaking for the motorsports industry and viral videos, so I’m super-excited.”

Generally you are just a lucky guy?
“I feel that way! But I also feel that you make your own luck. People might look at my career and think that everything has gone so well from the time I was thirteen or fourteen but it hasn’t. There were times when there wasn’t enough money to get somewhere or stay somewhere. There have been ups-and-downs but I have pushed through it to make it happen. It is not easy in any motorsport to make a living. People might see you at the pinnacle and think you are making a lot of money, and if you are then it is because you have put the amount of work into it to arrive there. For me it is all-equivalent. It is an incredibly difficult job with a short life span. I feel that I have played my cards right and built a product of how I wanted to be able to make a living. With Freestyle there is a long way to go, and things like the video projects means I am able to go to some incredible locations and do things on the bike that other people in the sport will not get the chance to do. Hopefully it will create a platform to make the sport grow further.”

With Daniela furiously typing an email to us on the opposite sofa with all the promo info about Aaron’s calendar and activities it is clear she is as important to his profession as gas in the tank. The couple could not have been more hospitable and down-to-earth during our visit and to underline the point they invite us out for some dinner at a nearby Chinese restaurant but the motocross tracks of Corona are calling for a separate story the next day. While Aaron Colton might be more familiar with the smell of smouldering rubber we remind ourselves to keep an eye out for the long hair and perma-grin at any motorcycling pass we happen to cross.