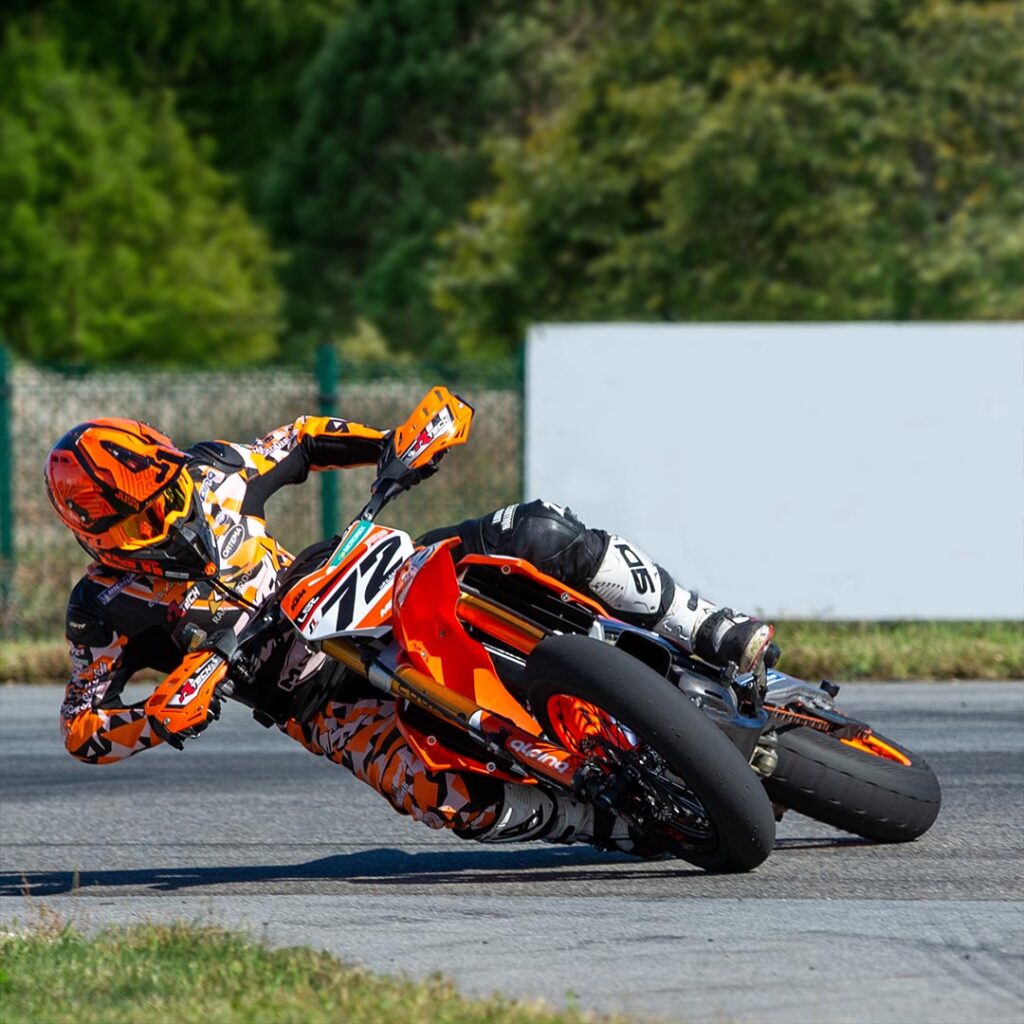 THE RIGHT RECIPE FOR THE TRACK

If you find yourself admiring some of the extreme Supermoto or DUKE photographs on the KTM website, then there is a good chance that one of those riders in the frame is Lukas Höllbacher. Not only is the Austrian a world championship racer and deft hand with his motorcycle skills but leads a curious double life; he helms one of his country’s oldest surviving businesses. We asked the 25-year old to explain a bit more…

Lukas is an unusual Grand Prix winner. The rider from Ranshofen kneads the demands of competing in the FIM Supermoto World Championship with those dictated by being part of the Höllbacher family, overseers of ‘Klosterbäckerei Höllbacher’: a renowned bakery that has been in existence since 1125. Austria’s oldest.

“From one o’clock we are baking until about eight and the shop is open until six in the afternoon. I’ll sleep from 9am until 12 and then again, like normal, in the evening. So, two sleep periods but I have the afternoon completely free.” Höllbacher has used those afternoons to become one of the prominent names in international Supermoto.

It’s an unconventional means of training and development for competition but Lukas is fortunate to have close support. “My parents will help, and that means I can have a couple of nights free to change routine for the race weekends,” he explains. “Otherwise it is a big drain on the body. I need those one-two nights to prepare properly and it works quite well.”

Four generations of Lukas’ family have directed the Klosterbäckerei Höllbacher and they marshal the work and efforts of ten employees. Since the end of the last decade though Höllbacher has been trying to master two vocations. Ranshofen is located a short distance from Mattighofen, which meant that motorcycling – and the KTM ‘orange’ – has never been far away and the allure to two wheels was strong.

“When we were both kids my sister got the chance to ride a KTM 50 SX and, yeah, after seeing that I fell in love with the bike! It helped also that all my family had a history in motorsport and with KTM:  my uncle was long-time engineer and developer for a lot of KTM offroad bikes at the company,” he says. Progress was fast on the asphalt, largely thanks to the amount of competition. “There were a lot of races in Germany and Austria and for young riders. I was very fast from the beginning on the 85s and 250s and year-by-year I made a big step. When I was sixteen, I won in the German S1 category against the Pros and that really opened the door for me in Supermoto. We almost raced every weekend between Germany, Austria, Switzerland and the Europeans.”

Höllbacher excelled with the KTM and track machines like the KTM 450 SMR (the 450 version is now new for 2021). He had an urge to thrill that had to be satisfied and rose through the sport like one of his famous loaves. He started to rack-up national titles and by 2010 was among the hottest starlets on scene with S3 class European and Austrian titles. Germany, also, would soon be toast.

Höllbacher fostered a relationship with the KTM factory that saw his riding proficiency and tendency towards flamboyance eventually end up on the cover of brochures and catalogues and large posters for more than half a dozen different bikes. Then, come 2016, he wanted a change.

“I had a lot of bad luck at the S1GP races when I wanted to bring really good results on the table to be in a good position for 2017…but that didn’t happen,” he remembers. “So, then there was a meeting with Husqvarna Motorcycles and they gave me a good contract do to the Austrian Motocross championship.” It was the fresh challenge he needed, and a challenge it proved to be. “There were a lot of downs with some bad crashes and injuries but on the other hand I also had good races, some victories and a lot of holeshots! Motocross is a really hard sport, it takes a lot of pain sometimes, but I was happy with my improvement as a rider. I can say it helped me a lot with mentality, fitness and riding technique. All-in-all, a good journey.”

Höllbacher was again at a crossroads but one direction pulled harder than the others. “In my three years away from Supermoto, there were a lot of requests from teams. So, I thought ‘I’d like to return and fight again at the top of this sport’. Franco Mollo’s request was for me the best way and best choice I could make.”

Joining KTM MTR team led to more success. To-date he has three victories at world championship level until the COVID-19 pandemic put the brakes on. He was also crowned Spanish Supermoto Champion recently.

All the while Höllbacher balanced his family responsibilities with his hunger for RPM. In fact, he had to focus on baking time rather than lap-times as the bakery remained open and active during the lockdown phases. “We stayed open and it was a lot of stress, but we ended up with 30% more sales, so it was good that we were offering something,” he says. He has now taken control of the business from his father since September 2020. “I like the baking. If you are not happy then you won’t do well in racing or the job and I like the mix of both of these things in my life. We are still a real handmade, authentic bakery, with high quality bread. It is hard work too, but it has a few advantages like fresh, good bread every day and pretzels! I can always adapt my energy to the situation in front of me.”

Höllbacher cherishes his recent victory in the Spanish championship and his three world championship race wins but also values his ‘hidden’ role with the KTM photographers that have led to some spectacular images over the years and is a very visual ingredient of the company’s branding and marketing drive. Lukas is many people’s first contact with some of the rasping appeal of a track weapon like the 2021 KTM 450 SMR. “It’s different to racing but also not that easy! I’m completely unused to bikes like the KTM 125 DUKE but it makes me really happy when the photographer looks at you with the thumbs-up and he knows he has the shot. It is important to ride the bike to the limit and aggressively early on. It’s challenging but a really cool thing.”

Aside from the buzz of photoshoots, Höllbacher also gets to sample the latest and best of the KTM bike range. His opinion of the 2021 KTM 450 SMR and the KTM 690 SMC R are particularly valid. “For me – as a racer – the KTM 450 SMR is an ideal machine for the track. It’s a full race bike and you can win in the top class with a stock model. It’s that good. The KTM 690 SMC R is a perfect bike for the street because it’s powerful and you can also make longer trips. It’s not just for the city. Both bikes want you to use that same type of riding style…and that means a lot of fun.”

Whether he’s rolling a special assortment of dough or a bike across tarmac bumps, #72 is used to the ‘heat’ of the kitchen and the competition. Where will he grow next?

5 Responses to THE RIGHT RECIPE FOR THE TRACK