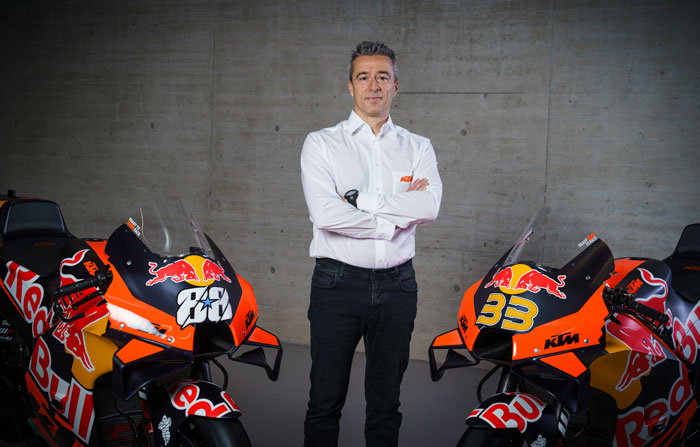 THE SEARCH FOR MINIMAL (AND CRUCIAL) MOTOGP GAINS

The MotoGP™ ‘pressure gap’ is even smaller than ever. It consists of fractions of a second when peak performance is already at the limit. We asked Red Bull KTM Factory Racing Team Manager Francesco Guidotti about the difficulty of helping riders make the difference when they are already maxed-out…

0.3, 0.8, 0.2. These slithers of a second have been the difference between victory and 2nd place in at least three of the first six races of the 2022 MotoGP season. The gap is just as tight for the full podium, the top ten, points-scores and the critical qualifying run to gain a place in Q2 and the first three rows of the start grid. The search for an advantage has led to minor innovations over the last three years with holeshots devices, bike ride-height adjustment and tire scoops. Riders have had to adapt, with the selection of buttons and levers now more plentiful and complex than ever. The spec rubber, electronics and similar systems for brakes and aerodynamics (the aero has to be homologated) means the emphasis is turning back onto the racers to try and seek even more performance.

This is where somebody of Francesco Guidotti’s skill and experience comes into the MotoGP picture. The Italian is new to the helm of Red Bull KTM Factory Racing and overseeing the efforts of both Brad Binder and Miguel Oliveira but counts on more than two decades of Grand Prix history pushing teams to success.

Guidotti’s role is to harness all the best attributes of the expertise around the South African and the Portuguese and then focus on the precise needs of the riders to achieve the results KTM are seeking. The factory has won Grands Prix every season since 2020 and are looking for more prolificacy.

“The technical aspect of MotoGP is, of course, still the most important but the difference between the bikes is always less and less,” he describes. “Every season you can see that more bikes are gaining more performance. You get to a situation where the details really count and what the rider brings is also more important every year.”

So, a rider needs to train his mind more than ever now? It’s the next barrier to breakthrough for elite motorsport?

FG: Yes, and the rider has to realise this and be aware of it because until a few years ago physical conditioning was perhaps more important than the mental side, which you can understand because the bikes have always a been physically-demanding. That aspect – fitness – is always easier to accept and understand because the rider feels how his body reacts and knows how and where he is weaker or stronger. But on the mental side it is a bit tricky to go ‘inside’. They have to be really self-confident but how much? And how? Especially in the difficult moments it can be tough to accept that someone can be like you or even stronger than you. Circumstances in MotoGP in now mean that you can be the best and feel like the best because of a few milliseconds but then you can also feel very s**t because of a few milliseconds! We have to manage moments like these.

It must be hard for you to balance the delicate moments between exhilaration and despair…?

FG: To always find the right moment and the right words to explain things is not easy, it’s almost impossible. The best you can do is keep them in an average good mood and a decent level of self-confidence but not too much. If they are always over-confident then any problems are always on the technical side or the bike or someone or something around him: a good balance is always the best way.

“Real champions get energy and motivation from pressure. That’s the difference between a good rider and a champion. Instead of being scared by it they rise to it…and it says a lot about a personality.”

How do you make strong-willed people open-minded? And how do you connect with them to be persuasive?

FG: Well, you can do things like show them data from the technical side of the bike and explain what is good, what is wrong, what can be better…such as using a different line or using the throttle in a different way, braking sooner or later. The technical input is fundamental but it is part of the balance. We also have to consider that we stay with the riders for four days, and then for the next ten they disappear. So, it’s key to keep the connection over distance and away from the race. It’s important because we all want a life away from racing but the difficult part in working with riders is when they are home, not when they are with us at the circuit. We normally see the peak of the performance when we are at the track…but we have no control in the days leading up to this and things can affect them.

That’s quite a lot of control. Is it because there is more pressure now?

FG: A lot of pressure, massively more. More than ten years ago, if you were a factory rider and you had a bad race, you could finish around the top five because the technical gap between the factory and the Independent teams with the bikes and the tyres was much bigger. At the moment, most of the satellite teams are near the same technical level as the factories. It is much more difficult, it is much closer. Last year I made a statistic for five races in a row and the gap between each rider – from 1st to the 12th in Q2 – was 33 milliseconds. So, for us and for the riders it is so difficult to say, “you made a mistake here” or “the bike is not performing here”. The scenario has changed so much in the last five years and everybody has more pressure but the rider the most because they are risking so much.

Mental coaches and sports psychologists have been in the background of MotoGP for a number of years but is the psychological aspect of racing the next big area of training to conquer?

FG: It was 2005 actually when I approached a mental trainer and started believing in it more and more. I believed it could help to keep focussed and help limit mistakes at this level and this speed. It can save energy for performance and help with clarity for situations and for details. It will be the next [area]. In a lot of sports it is normal. Everywhere you look in sport there is a mix of physical and mental demands. Here a motorcycle rider is seen like a ‘macho’ guy and that type of mental training is not seen as necessary. That’s just ignorance. This sport is always more and more professional. There is no point having the best bike and the best physical shape if you cannot also use your head at this level. So, you should work on it.