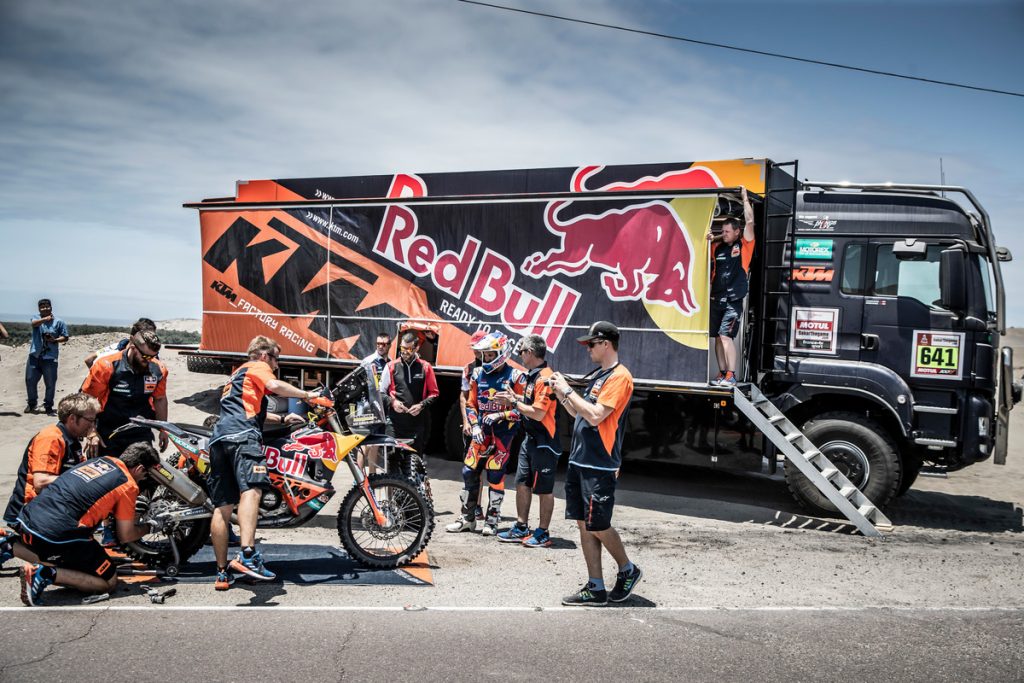 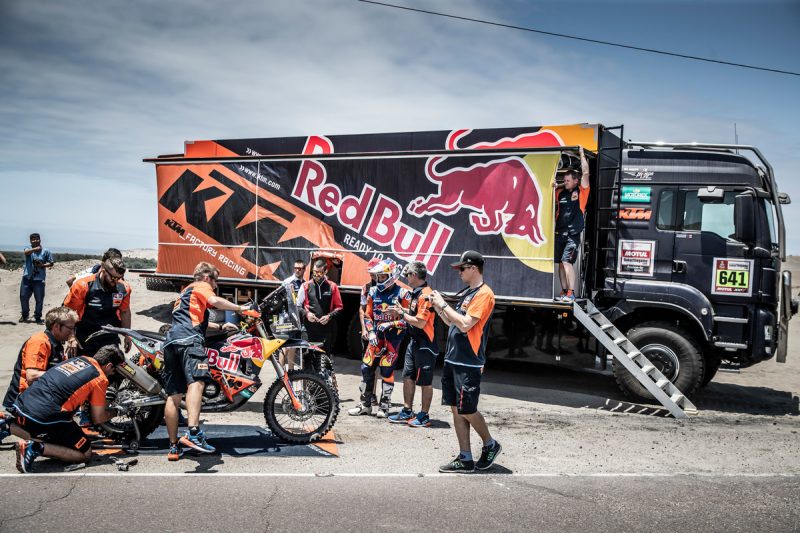 Andreas Fisher, physiotherapist
When asked how he ended up in the trouble called the Dakar, Andy scratches his head: “It’s a really long story.” However, it’s an interesting one, so we’ll make it short. Andy’s Dakar sort of started playing American football in the second German league. He was 22 when he met Ilona, who was dating his teammate as well as working for KTM. When, later, Ilona became Pit Beirer’s wife, Andy would become his physio. “It was in 2002 and motocross rider, Pit Beirer had a contract with KTM. One day, out of the blue, Ilona asked me if I could check his ankle. I treated him and it worked out fine. This is how I started to work for KTM. I was very fortunate to get the job. I come from sports myself, so for me it was a perfect fit. Firstly, I began to work more seriously with Pit, and later with other motocross riders, preparing them for races.”

In 2012 he was offered to join the rally team and Andy exchanged the track for the desert. Yet his first Dakar was something he could have never imagined. “The first days, it was 49 degrees during the day, and 30 at night. I was sweating in my tent, couldn’t fall asleep, and thinking how I´ll survive this hell. Well, obviously I am still alive and this is my eighth Dakar,” he laughs.

His first “clients” were Marc Coma, Joan Pedrero, Kuba Przygonsky and Kurt Caselli. “I am really sorry for Kurt, he always had a smile on his face for everybody. He was so respectful and grateful, a beautiful soul,” recalls Andy, and adds: “Thanks to the Dakar, I’ve met so many great people, and have seen so many wonderful places. After all these Dakars I’ve done, the beauty of rally for me lies mainly in working for the KTM team. Here no one works alone, we all help each other. My greatest satisfaction is to see that the riders are responding well to my treatment and fighting for victory.” Being one of the most popular team members for obvious reasons (who doesn’t like a massage?), his popularity is well deserved. Andy doesn’t just take care of the physical side of things – his backpack is full of ginger and herbs, and he will always lend an ear if needed. 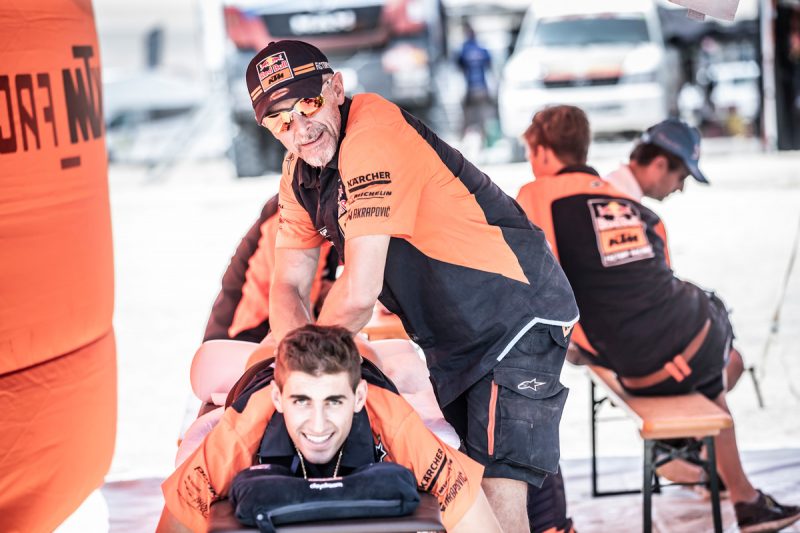 There are no coincidences in life, and this law also applies to Michael Krifter, orthopedic surgeon and enduro rider in his free time. He was the last member to join the team, quite literally, as on January 4, he still performed his last urgent surgery. At 5pm, he took off his surgeon gloves, reached the airport at 6pm, and took off for the Dakar at 7pm.

His Dakar affair started when as a kid he was watching Kini racing the Dakar in Africa on late night TV. He felt the ultimate adventure so falling in love with dirt bikes was the logical next step. Nevertheless, there was something he loved more. Observing his grandfather and father working as general practitioners, he knew he wanted to become a doctor too. He did it a bit differently and became an orthopedic surgeon. Between surgeries, once he even went to Libya for a Dakar-like experience, together with the Dakarian Peter Hinterreiter, fell in love with the desert and got a glimpse of what the Dakar might be. Years later, he came in contact with Matthias Walkner. “Matthias was my patient, I treated him, operated one of his friends and one day he said: ‘It would be really cool if you came with us.’ I said: ‘Ok, I’m happy to do it, I just need to know 3 months in advance so I can reschedule my calendar!'” But desert racing is unpredictable and a few days before Christmas 2018, Michael got a call from team manager Jordi Viladoms – and accepted the job. He worked over the holidays, pushed hard to make the Dakar possible, and that was the beginning of something amazing.

“There is no easy way to put this experience into words,” he replies to the basic rookie question. “It’s such an amazing, complex thing. It’s incredible how the members of the team interact; things work easily and almost automatically. On the other hand, it’s so interesting to observe everyone here as a real character! It looks like the secret of this harmony is a common goal: every member of the team wants to win just as bad as the riders do.”

When asked about the riders and his job, Michael takes a deep breath: “I worked a lot with different professional athletes, but I found desert racers are really different. I knew they are risk-takers, though I couldn’t imagine how far they are prepared to go in a sport where you can lose your life over such a small mistake. You can feel they do it because they really love it. Our team has the best riders in the world, and that means they go all-in. Mind should certainly overcome the body if you want to win this extraordinary race, and Toby Price is the best example to prove that. I’ve for sure found a whole new topic to explore within sports medicine,” he concludes.

Still, KTM’s witty doctor didn’t just take care of the riders, but also the whole team, affected by diarrhea and the flu. His “revolutionary” work already began in Lima when he banned junk food from motorhomes and replaced it with healthy calories. “Besides that, I battled hard with torn ligaments, bad bruises, concussions, distortions up to a broken spine, a badly fractured ankle and a poorly healed scaphoid on fire … to get the riders to the finish line,” he adds, a bit proud to contribute to a great result. 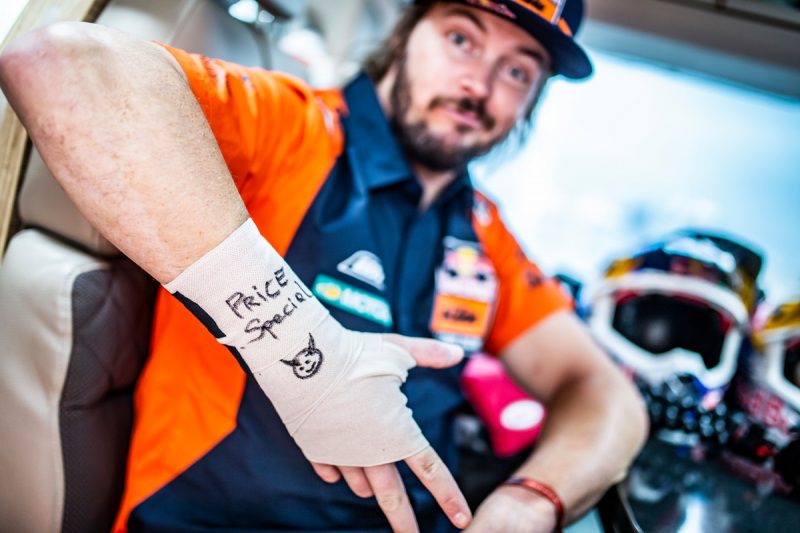