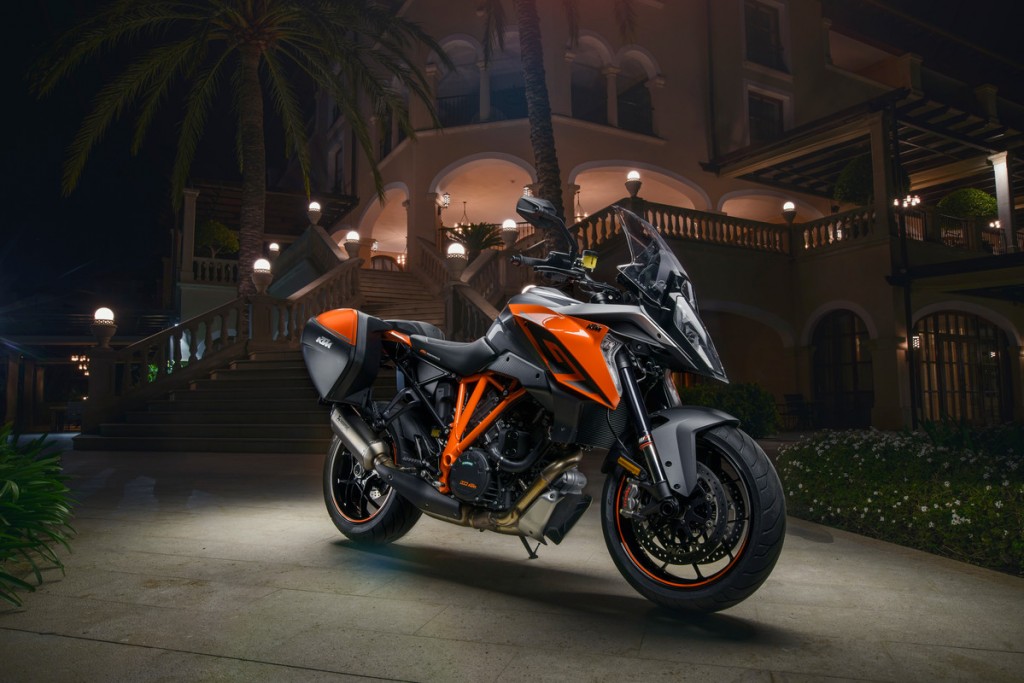 The covers were thrown off the 1290 SUPER DUKE GT last November at the EICMA show in Milan but the first time that anyone outside of Austria has grasped the handlebars in anger happened last week with the international launch on the roads of Majorca. We asked Street PR Manager Luke Brackenbury for three first impressions gathered from motorcycle press that had travelled across the continents to the Spanish island regarding Mattighofen’s newest machine and – in typical style – a motorcycle that cannot quite be pigeon-holed. 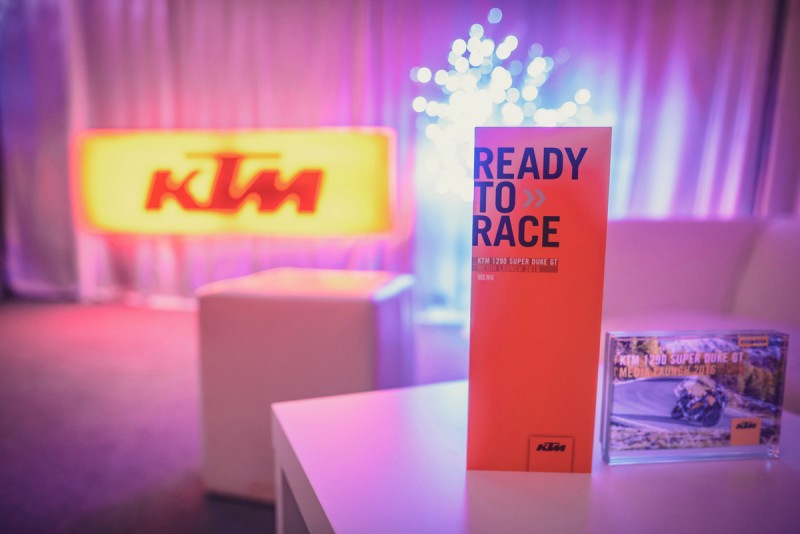 “We’ve had around seventy journalists from all over and a fleet of thirty-odd bikes,” Luke said. “The pace of the riders was really good.” Mere months and weeks after the KTM PR and Events crew had camped in a hotel in Grand Canary to introduce the KTM 690 DUKE and R, the presentation process was being repeated for the 1290 SUPER DUKE GT and involved arduous journeys for many of the international press that were invited and gladly accepted the chance to run the spawn of the KTM 1290 SUPER DUKE R through its paces. Apparently the enthusiasm for some lengthy riding days was high. “I think it goes with the fact that there is no real comparable model and there has been a lot of interest,” Brackenbury says. “The KTM 1290 SUPER ADVENTURE has the GS and it’s in a highly competitive class. The 1290 SUPER DUKE GT is almost by itself.” 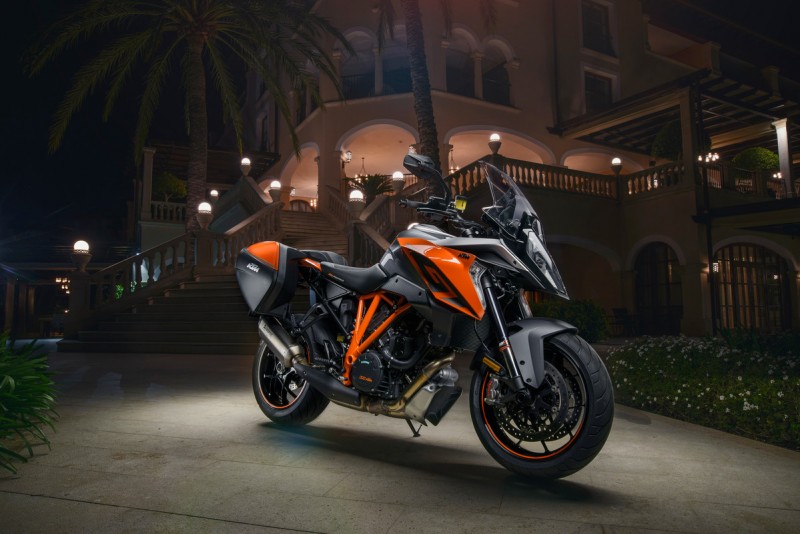 So, what principal feedback surfaced?

1. Power to the People
“Everyone loves the engine,” LB continues. “I think everyone knew about ‘The Beast’ [1290 SUPER DUKE R] and its potential – even though it was actually the easiest bike to ride – so put a screen and some panniers on it and the mentality changes. With all the electronic rider aids they are not intimidated by the performance.”

Arguably KTM’s most advanced vehicle in terms of electronics and rider assistance ‘tools’ (cornering ABS, traction control, motorcycle stability control, even a quickshifter and you can add hill hold control and a motor slip regulation also) the package hones what is already a meaty source of power from the LC8 coming in at 173hp. The 1290 SUPER DUKE GT seemingly takes the sporty heart of the 1290 SUPER DUKE R, beefs it up and then smoothens out that torque even more to add the touring element to the GT.

“Honestly we could end-up taking sales from ourselves,” Brackenbury says after listening to comments in Majorca. “The GT is here because there was a torque animal with massive performance and with the electronics it was easy to ride. The GT is the same but it offers more: you can ride longer, do a track day and still have a blast on the roads. I have been to bike shows and heard people say the same thing; that customers might look at the GT instead of the R but then these people will be riders for whom the SUPER ADVENTURE is too big. This bike drops into its own category.”

The 75 degree V2 is ride by wire but with the engine management systems in place riders at the launch were exploring the versatility of the LC8 and the potentially different roles the GT could fill. 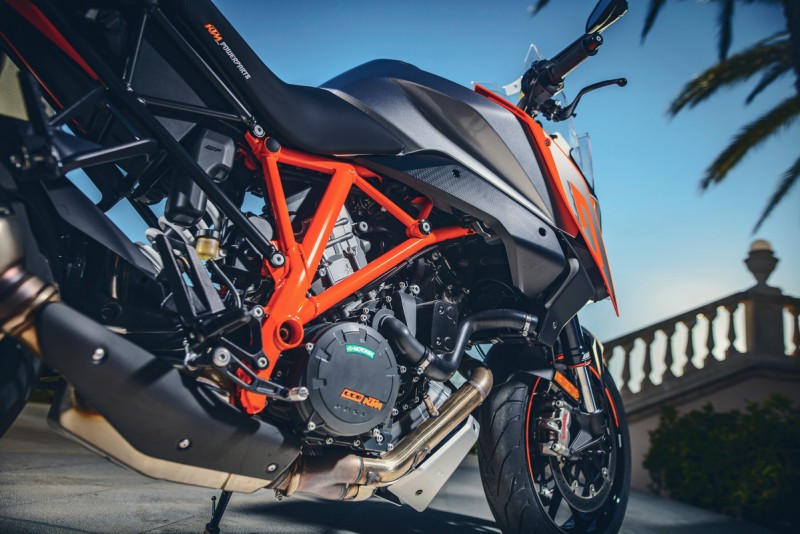 2. Go all day … and all night
“Another thing we heard about was the comfort aspect … it seems to fit a lot of people in terms of the riding position and the ease of the screen and they are really trying the ride mode settings.”

Lower footpegs, a bigger tank (23 liters), adjustable bars and levers, cruise control, heated grips and cornering LED lights are just some of the assets to emphasize the practical side of the GT. The windshield – operable and changed with just one hand – in particular was winning fans. “People love how easy it is to adjust on the fly and the combination with the tank and how it is deflecting the wind off them,” Luke says. “It can be a 280-290km day and nobody has complained and I’ve not seen anyone standing on the pegs. We finish the day and there are smiles on faces. Nobody is stretching legs or limbering up.”

Part of the security has to do with the chassis of the GT and the semi-active suspension from WP Performance systems. Our KTM press kit tells us that the GT ‘combines an extremely lightweight but torsionally highly rigid trellis frame and a beautiful, single-sided aluminum swingarm with the highest quality WP suspension components, unsurpassed Brembo brakes and sticky Pirelli Angel GT tires’.

“The roads change so much here,” Brackenbury adds. “The grey, sun-bleached tarmac can be so slippy and the darker asphalt is then something else. Despite this the road just comes to the riders. Even with the electronic damping suspension and anti-dive they can feel what is going on; this is the message that is coming across. It shows exactly how the WP system has progressed, even from the SUPER ADVENTURE. People are changing the settings and riding modes and can really feel what is going on with the road.” 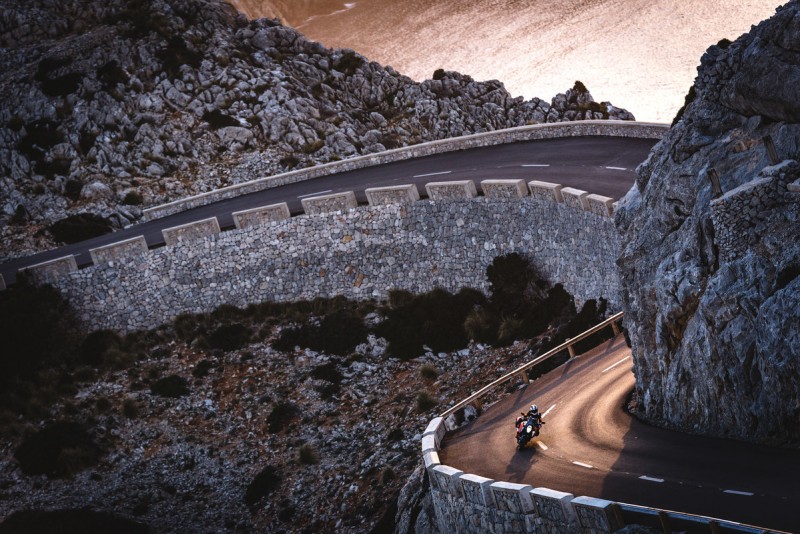 3. Clever things …
Technical specs of a modern flagship motorcycle now involve various acronyms: MSC, HHC, C-ABS, SCU (suspension control unit for that one) and so on. Simple weight, horsepower and dimensions are not enough any more. The GT is a bold, cutting-edge thrust into the future of street motorcycles for KTM and a fine example of how the bike works just as much as the rider when travelling at pace thanks to all the aspects of the package functioning together.

Brackenbury: “We are four generations into the electronics now with the traction control and cornering ABS and I think these guys trust in those systems. The corners on the route are pretty technical and the people here know that if they get it wrong they can get on the brakes really hard. We have everything here dogs, sheep, tourists in the middle of road, cars moving across and people are able to change and move around easily.”

Again we turn to KTM’s explanatory document for more details. ‘The electronic damping control SCU (suspension control unit) ensures the damping values are permanently matched to the rider’s style and the road surface in real time. The necessary information is delivered by suspension travel sensors on the wheels as well as front and rear accelerometers. In all this, the spring settings are continuously.’

Aside from the power, the seat, screen and comfort it appears to be the ‘rideability’ of the GT and the melting pot of the electronic aids and engine management system that is making the new bike cause some excitement. At this point we felt compelled to ask: were there any concerns?

“There were only compliments for the GT and you would expect that but it was curious to hear some of the faster guys querying the amount of rebound on the damping in ‘Comfort’ mode … but we were riding them quite hard and the good thing about the bike is that you can program the suspension to however you want it.” It seems that under the long list of selling points the shape-shifting capacity of the GT is perhaps the most impressive overall element of this bike. Or is it? One word surely for the Kiska-created styling.

“Everyone says it is better in the flesh,” Luke says. “Even I was unsure from the photos but with the panniers and the fact that it has many lines and you can look at it from different angles. People saw the GT in the morning and knew it would deliver the ride. We’ve even had riders calling it ‘the ultimate bike’.” 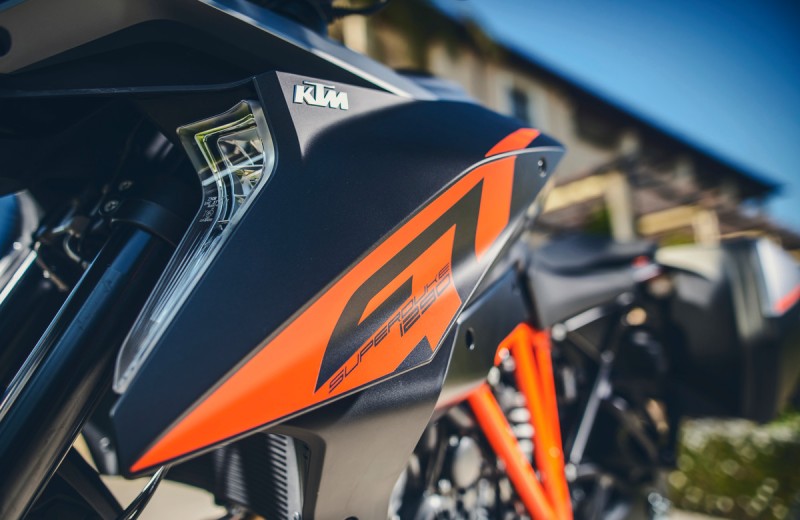