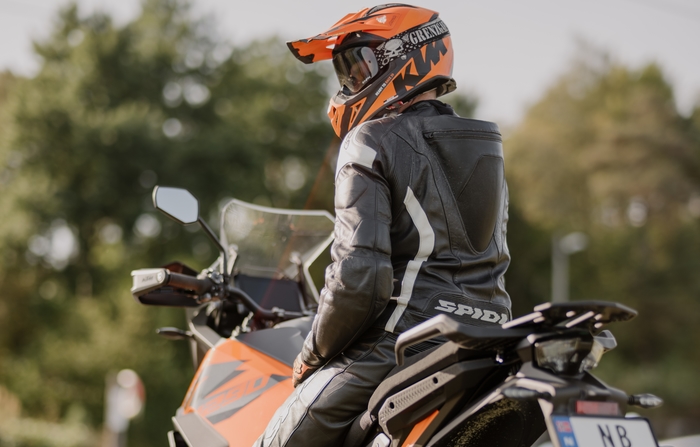 Glenn Vassnes emerged victorious from more than 2,000 adventurers from more than 70 countries who entered KTM’s 2021 THE WORLD ADVENTURE WEEK. The Norwegian hit 1,043 km and completed the needed challenges in just two-and-a-half days by throttling a 14-year-old KTM 690 SM PRESTIGE.

“I heard very early about THE WORLD ADVENTURE WEEK contest, and I thought ‘that sounds amazing’. I knew I had to do it but there was a small problem. For different reasons I was left without a bike… so I had to ask a friend if he could lend me one and I ended up with the 690 SM PRESTIGE.” From this point Glenn’s life began to get complicated.

The 33-year-old from Stord was one of over two thousand riders who set about tasks such as climbing a certain elevation, visiting a KTM dealership and breaching the magic 1,000 km barrier during the course of seven days in early July. Over 700 group rides took place, and a million kilometres were made and charted through social media and the RISER App, with the goal of bringing a community of like-minded and passionate motorcyclists together, and then documenting and following their endeavours.

Vassnes was ready to attack THE WORLD ADVENTURE WEEK with the KTM 690 SM PRESTIGE when his plans hit a snag. “I was told to start work earlier than expected,” said the Instrument Engineer who had to travel to an offshore platform for his job. “I had to leave on Friday and believed I could still do it. Then I had another call which said I had to be there even earlier! I looked at the competition and what I had to do and I was really pumped about it so decided to try and make it happen in less than three days. It was a very narrow window. I thought ‘1,000 km is a lot’ but I believed I could handle it.”

There were some fraught moments. “On day two I was making the 890 m of elevation task with two friends so we targeted the biggest mountain we could,” he recalls. “We were about 200 km into the trip and were coming down the mountain when my friend’s bike, from another brand, failed. He knew how much I wanted to hit my goals, so we left his machine and he rode 170 km on the back of mine. The SM PRESTIGE is not the biggest of bikes and we’re not the smallest dudes!”

Then there was an unexpected finale. “So, on day three I had to catch my flight to work. I got up extra early, did some mileage, visited the KTM dealer that was close to me – another one of the tasks – and then rode three hours to the airport. When I arrived and went to close my App, for some reason the KTM dealership task had disappeared. I had to find another one close to the airport. I got lost in the city but found the place, got the App checked and then went back. I was cutting it very fine for the flight now, it was raining, and I got lost again trying to reach the airport. I managed to check-in with only two minutes left! Another problem was my riding gear: where could I leave it? I found a solution by getting a shoe bag at the airport and somehow managed to get all my wet, stinky kit inside and only just out of there!”

Vassnes laughs about the experience now and is also full of praise for the SM PRESTIGE that carried him to first place. “It was much cooler to do it on a bike like this than one that is designed for the purpose,” he opines. “Also, the 690 SM PRESTIGE is really fuel efficient. It’s quite an old model now and looks kinda dorky but I could keep the same speed as my friends on their bikes while using way less fuel. I’ve done a lot of very long rides on a KTM EXC. In fact, it is one of my passions and I knew how good something like the 300 2-stroke could be. So, I had a lot of faith in the 690 SM PRESTIGE.”

The Norwegian seems to relish life in the saddle. While his WAW trek was arduous at times, he cannot pick a particular highlight. “There were many really. Together with my friends and girlfriend we ride a lot anyway; getting on the roads and having adventures.” He also claims that his particular territory is prime for two wheels. “We’re on the west side of Norway, an island, with a mix of a lot of coastal roads and mountains. It would probably be bad for cars because of the amount of turns and twists but for bikes? It must be one of the best in the world.”

Thanks to his #1 ranking for WAW, Vassnes took delivery of a brand new KTM 1290 SUPER ADVENTURE S. He claims it’s changed his ‘biking’ life. “I have to say that it’s incredible. I’m not that good at saving money because I’m usually spending it on trashy old motorcycles so I would never be in a position to buy a bike like the SUPER ADVENTURE, and its mind-blowing. I’m a big Supermoto fan so it’s still a bit unbelievable how something big can be so nimble and handle so well. I actually had to remove the centre stand because I was scraping it so much. It’s so easy.”

Vassnes arguably deserves some ‘easy’ after taking the hard way to conquer WAW!

More information about THE WORLD ADVENTURE WEEK and the final leader board can be found here.