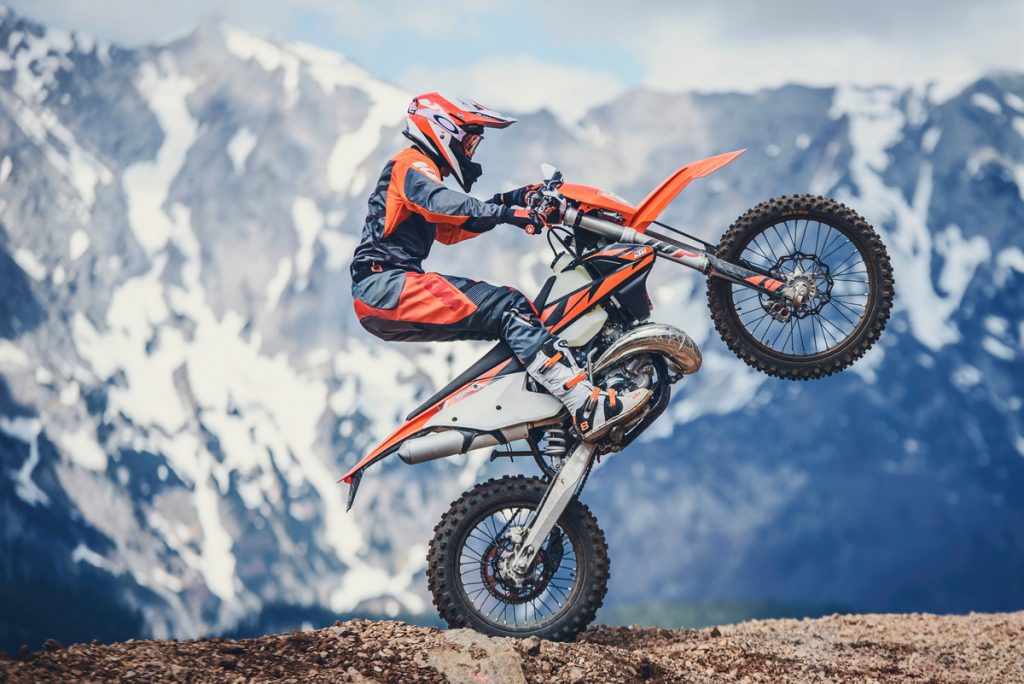 KTM’s new 2-stroke TPI Enduro machines and the slowly rising temperatures in Europe could be inspiring a bigger itch to get out on the track and trails; perhaps, for some riders, for the first time. Whether you are eying an overhaul of the riding wardrobe or considering investment in some important bike gear then here’s some guidance over what to look for … 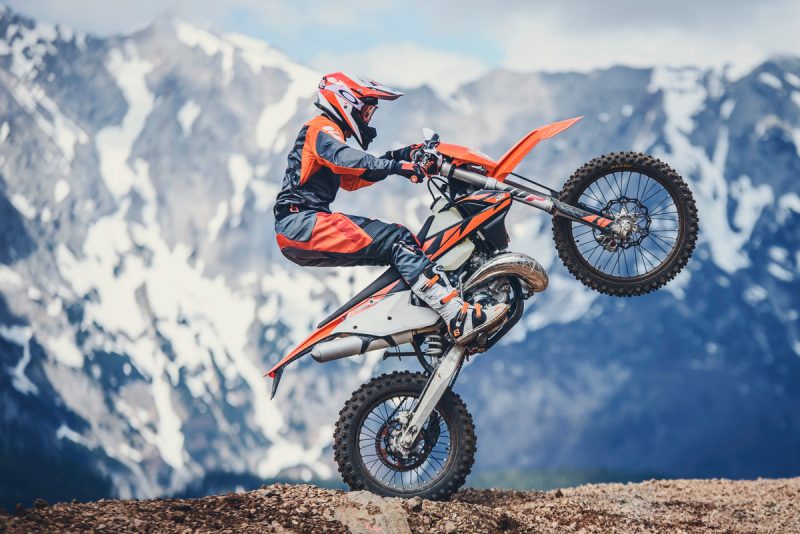 Boots
It only takes one ride to realize just how much punishment a pair of boots will undergo. Impact, scrapes and wear from the ground and external elements like roots, berms, undergrowth, engine heat and emissions and even other bikes go with the damage caused by footpegs and issues with buckles. Boots were once creations of soft and impractical material with harder plates for protection but now they are small feats of ergonomic and functional engineering, catering for safety around the top of the foot, extension of the ankle and guarding against hits to the lower leg. Premium brands like Gaerne and Sidi cast Italians as leaders of this type of technology but arguably Alpinestars are the top dogs when it comes to flagship motocross models like the Tech 10 or the slightly less armored or robust products like the Tech 8 or 7; all with their own assets and special uses. Alpinestars’ famous lab extensively tests every element of their product, from temperature and abrasion resistance to decolorization to a machine that simulates clipping and unclipping of buckles all day long. Did you know 273 components go into the construction of a pair of Tech 10 boots and the innovative inner ‘bootie’? Scott Sports are also worth a look with their 550 involving a special ‘tulip’ opening system meaning easy access in-and-out of what is likely to be the most heavy-duty set of footwear you’ll own. Aside from a helmet, boots will be the largest outlay for a rider and for good reason. Your feet and weight will constantly be on the move offroad and you need equipment that is not only up to the job but will last. Parts like soles and buckles can now be easily replaced. 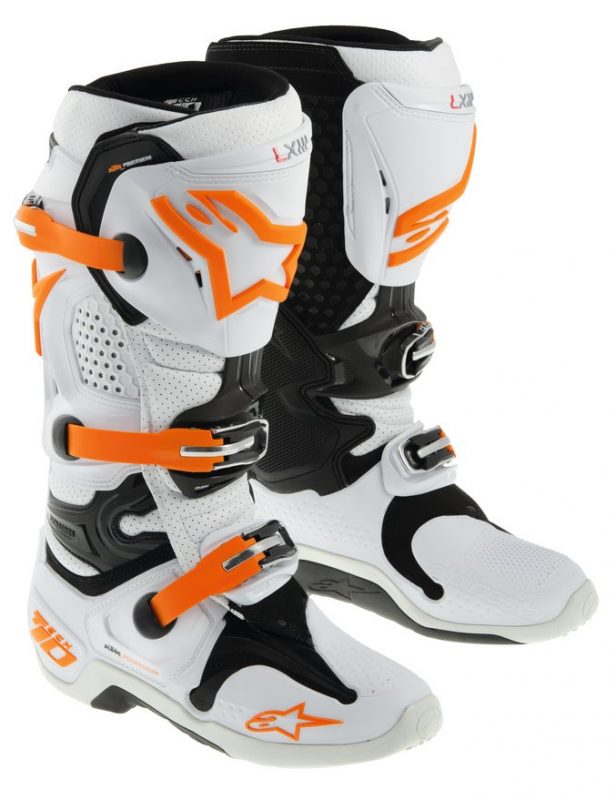 Neck brace
Back in the middle of the last decade a passionate internet video plea by motocross legend David Bailey advocating Leatt’s pioneering GPX neck brace was part of the catalyst in a flood of interest for a re-imagined form of protection. Driven by South African Dr Chris Leatt’s determination to create an aid or system of prevention against catastrophic neck injury, Leatt have prospered over the last decade and prompted other brands like Atlas, Ortema and Alpinestars to invest considerable cash and resources into R&D on the subject and product. Neck protection splits opinion, but Leatt have millions of dollars’ worth of research and findings to support their development and to a point where the GPX is now light, compact, simplistic and travel-friendly and has come to be seen as almost compulsory for junior off-roaders (Leatt even produce a brace incorporated into chest and torso protection for kids that essential does two jobs for the price of one). It works on a principal of load dispersion in a crash (Alternative Load Path Technology in the case of the GPX) and contact between the brace and the helmet assisting in reducing impact and strain on the neck and head. Leatt have a vault-load of testimony and feedback as to how their products (which have been adjusted for bicycle and street motorcycle versions) have helped save riders and the fact that athletes such as Red Bull KTM’s Marvin Musquin swears by the GPX is also significant. Another option worthy of attention include Atlas’ Air model. 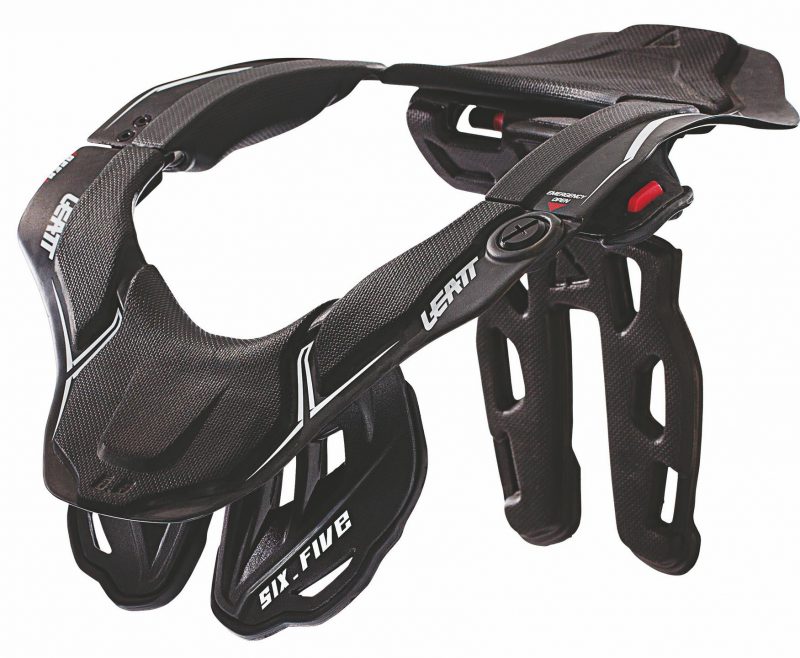 Goggles
Never underestimate roost. At some point you’ll be following another rider or a buddy and it only takes a fraction of a second for that rock, mud or other form of projectile to cause potentially lasting harm, never mind ruining a ride. Goggles have advanced with their frame construction, lens strength and resistance (many now boasting anti scratch and fog treatments on the Lexan) as well as comfort and ability to soak up sweat (triple layer foam is now the norm on most sets) over the past two decades. Factors such as strap strength, tear-offs and the range of visibility will also come into play when it comes to purchase. Then of course there is the aesthetic and the look and how it blends with the motorcycle. There are goggles for sand, juniors, spectacle-wearers and tinted lenses. There are products with vents, removable nose guards, protective bags and roll-off systems that cover almost the entire lens. Premium choices include Scott’s Prospect, 100%’s Forecast and Oakley’s Airbrake. 100% certainly win in the style stakes and gain points for price & performance but Scott’s pedigree with goggle development means they are one of the leading players in a busy market, for example each lens has passed a test of a 3mm steel ball being shot at the product at 112 meters per second. “We fire at 112m but the norm is just 60 for street visors and 40 for motocross so test is done at the double what is required,” a Scott spokesmen once told us. Check each goggle feels easy on your face and will fit well in the profile of your helmet.

What more?
Other honorable mentions have to go to items like chest protection which are often combinations of CE approved foam and composites that are heavily crafted towards lightweight, comfort, practicality (easy to wash and strap up/release) and impact-strength. They also come in versions that are all-encompassing with shoulder and elbow guards (even compression elements in moisture-wicking mesh sleeves) or basic upper torso armor for those riders who want maximum maneuverability. For Enduro riders who will be weaving in between trees and undergrowth then a wise philosophy would be ‘more the merrier’ in terms of protection against branches, bushes and other protruding elements of the nature.

Riding gear serves little in terms of safety but Fox released an interesting Enduro line in 2016 – ‘Legion’ – with Cordura as part of the material construction of the pant and jersey set and increased resistance against the elements was one of the main selling points. We actually tested the outfit at a riding school in Wales and after a sharp brush with a tree we were impressed to see that the jersey barely had a mark. Companies like Leatt have opted to use a material called Armourgel on their gloves as a form of protection for the fingers against stones and the silicon-type offering was interestingly proved on the press launch late last summer with the General Manager of Leatt North America wrapping his hand in the stuff and whacking it with a hammer. No media attention was necessary.

Lastly knee braces are perhaps a choice for riders clocking serious saddle time or have experienced injury or weakness with that particular joint. Weight and fit will be the key elements for what can be a pricey purchase and carbon constructions are top of the pile. Brands like Pod, CTI and Asterisk and even Leatt again with their innovative single-sided hinge creation are the market forerunners.