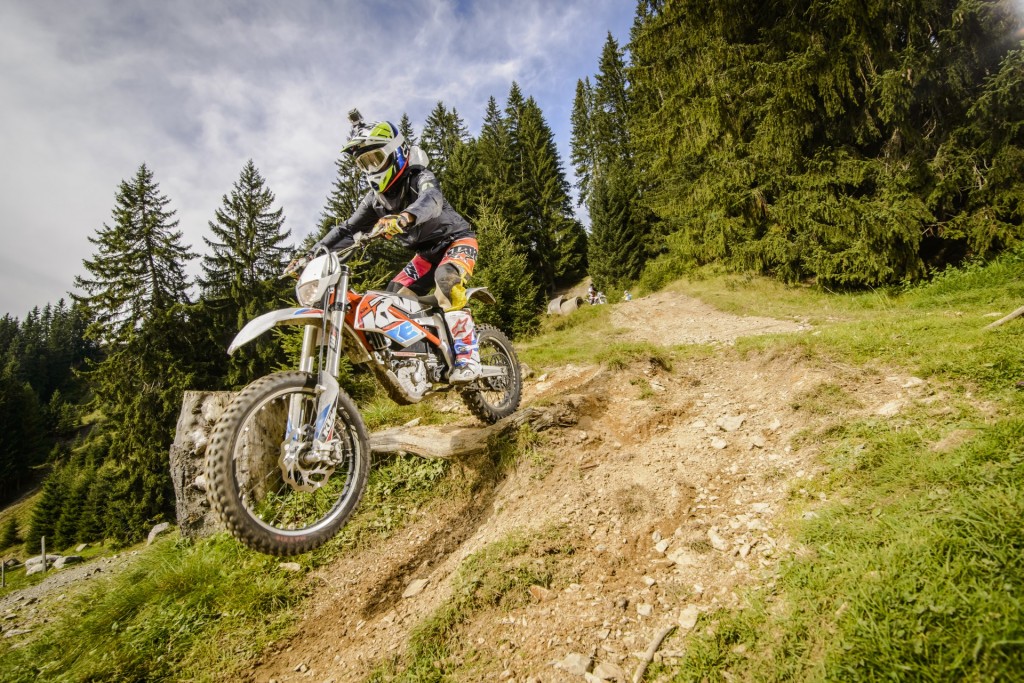 The lights flicked on the FREERIDE E with the media launch in Austria last week. Here are a couple of reasons why we’re buzzing on electric. 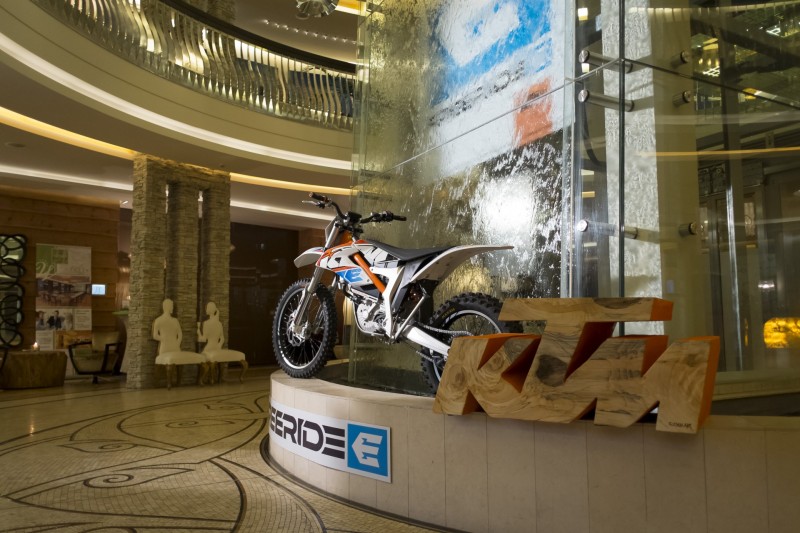 KTM have been investigating e-mobility for almost a decade. As Offroad Product Manager Joachim Sauer said to assembled press in the luxurious summer setting of the Saalbach-Hinterglemm ski resort in Austria “this is a clear and logical step for KTM. It is not a toy or a joke, this is a serious motorcycle and product.” 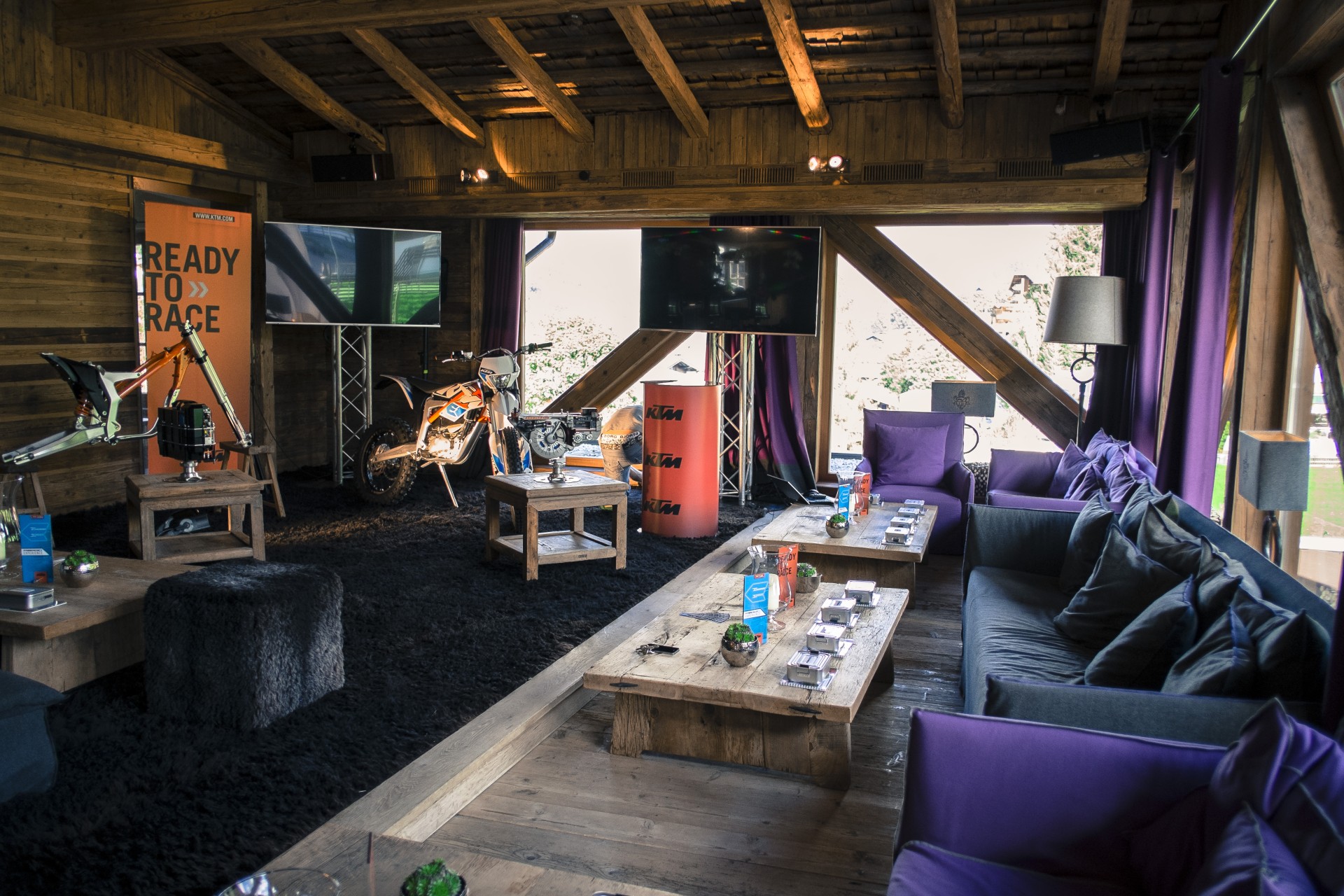 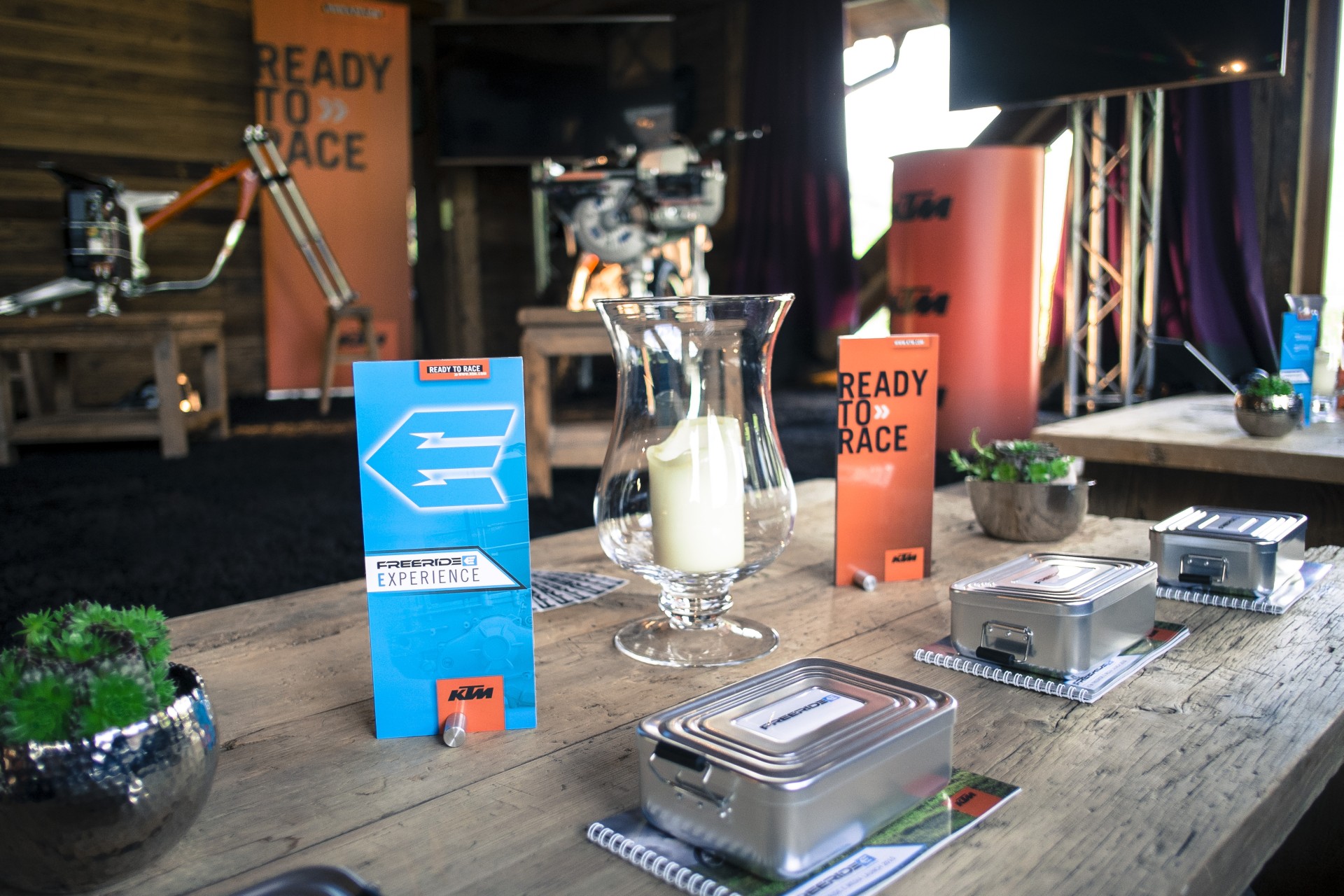 PR Manager Thomas Kuttruf also outlined the wider implications: “It was within our perspective to come up with solutions to maintain our excellent position in the offroad market at a time when conditions for offroad riding are getting worse. We need to fight against it and create a demand that will last many years. We call ourselves an innovative company and e-mobility will really opens the gates in many ways.” 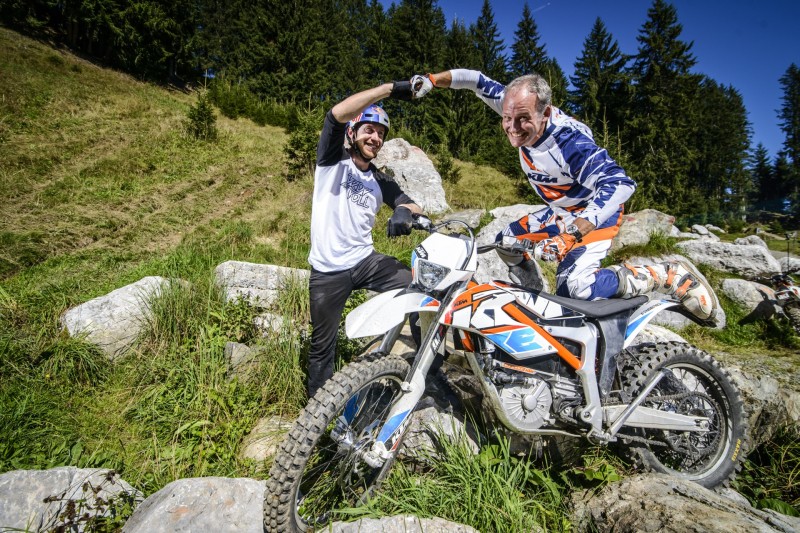 We’ve read the background of the FREERIDE E and learned some of the technical specs previously here on the KTM BLOG. Now, after having played with the production version and marvelled at the skills that bicycle stunt master Danny MacAskill demonstrated with this versatile piece of kit, here is a more definitive verdict.

1. Free-dom
There was a special reason why Saalbach had been chosen for a blanket unveiling of the ‘E’. The vast mountain ranges will soon turn white in a matter of months but in the depths of September the green slopes are full of mountain bikers and ramblers, paths and downhill courses. People turn their heads when they hear the slight electric whirr of the FREERIDE E but happily wave instead of covering their ears against the blast of a four-stroke. The Enduro model comes in at 110kg with 11kw of power with a peak performance of 16kw at 4500 ‘rpm’, basically producing more torque than the EXC two-stroke equivalent. Whacking the throttle open delivers a confidence-inspiring but rapid output of power and thanks to the three modes (1 for economy, 2 for standard and 3 for advanced) it can be as strong or as gentle as you’d like. You can amble along lanes and take in the views, or ‘gas’ the FREERIDE E to cope with some jumps and bumps of mountain bike downhill tracks (which are immense fun and less exhausting than pedalling). These same paths would be out of bounds to a conventional motorcycle but the slim and sporty dynamic of the FREERIDE means that the limits to where you can go suddenly evaporate.

Unlike the 2012 250R and 350cc combustion-engined versions it seems that the ‘E’ is entirely worthy of the ‘FREERIDE’ name. With the homologated Enduro version (lights, mirrors, registration) getting around the roads that link to the various climbs and mountains is also a breeze. We hit wooden boards of a cambered downhill curve one minute and then scale a mountain peak to witness poor weather over a neighbouring Italy the next. With simple front and rear brake operation possible thanks to the levers on the bars (it seems strange that your feet do not have to do anything) then the analogy of ‘it is an easy as riding a bicycle’ comes to the fore. KTM staff get excited when a Polish TV presenter who has never ridden a motorcycle before decides to make her ‘debut’ with the FREERIDE E and arrives at the scenic lunch spot having happily motored her way several kilometres up the hillside. For the aspect of appealing to beginners and a new motorcycle audience the FREERIDE E gets an immediate validation and thumbs-up. 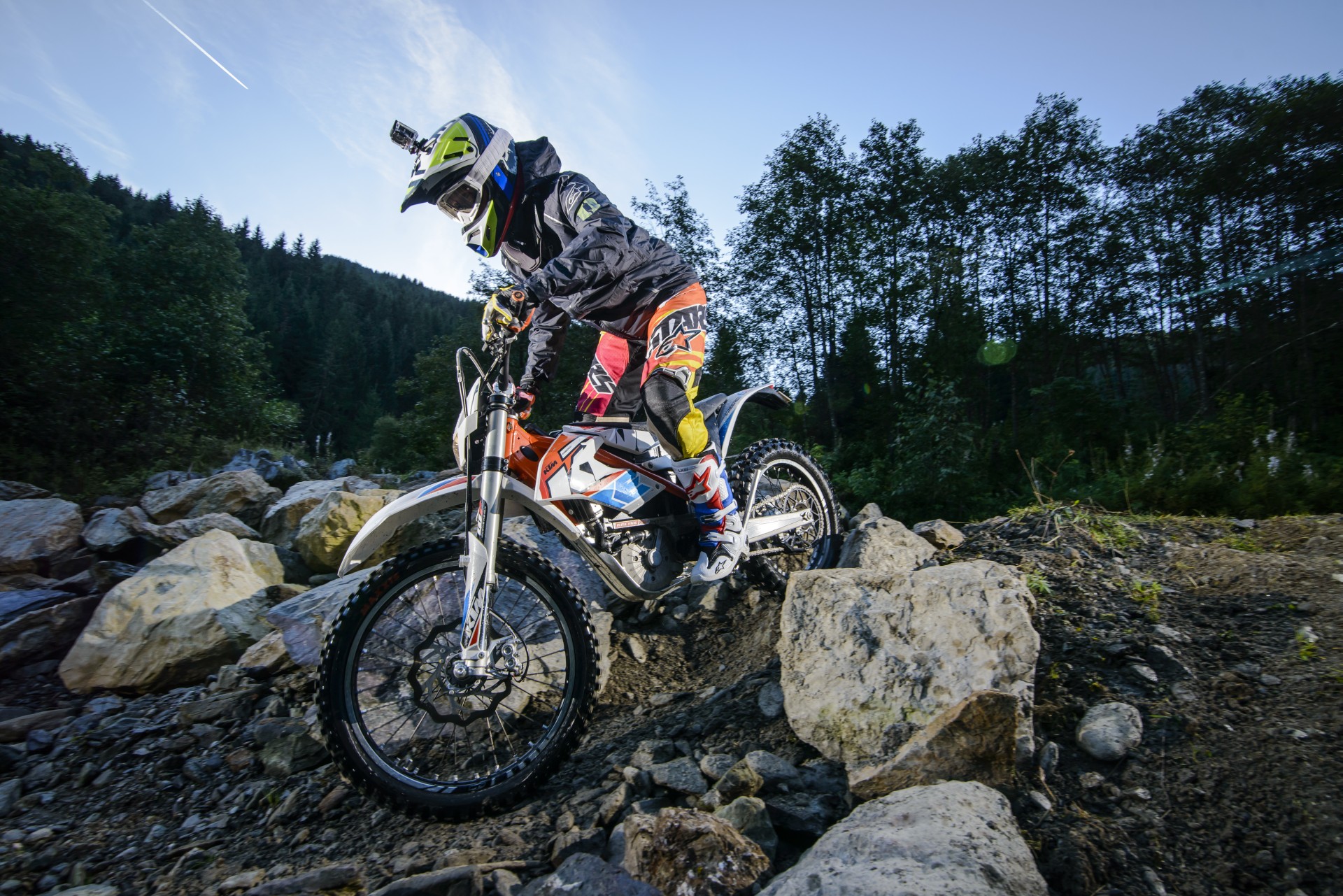 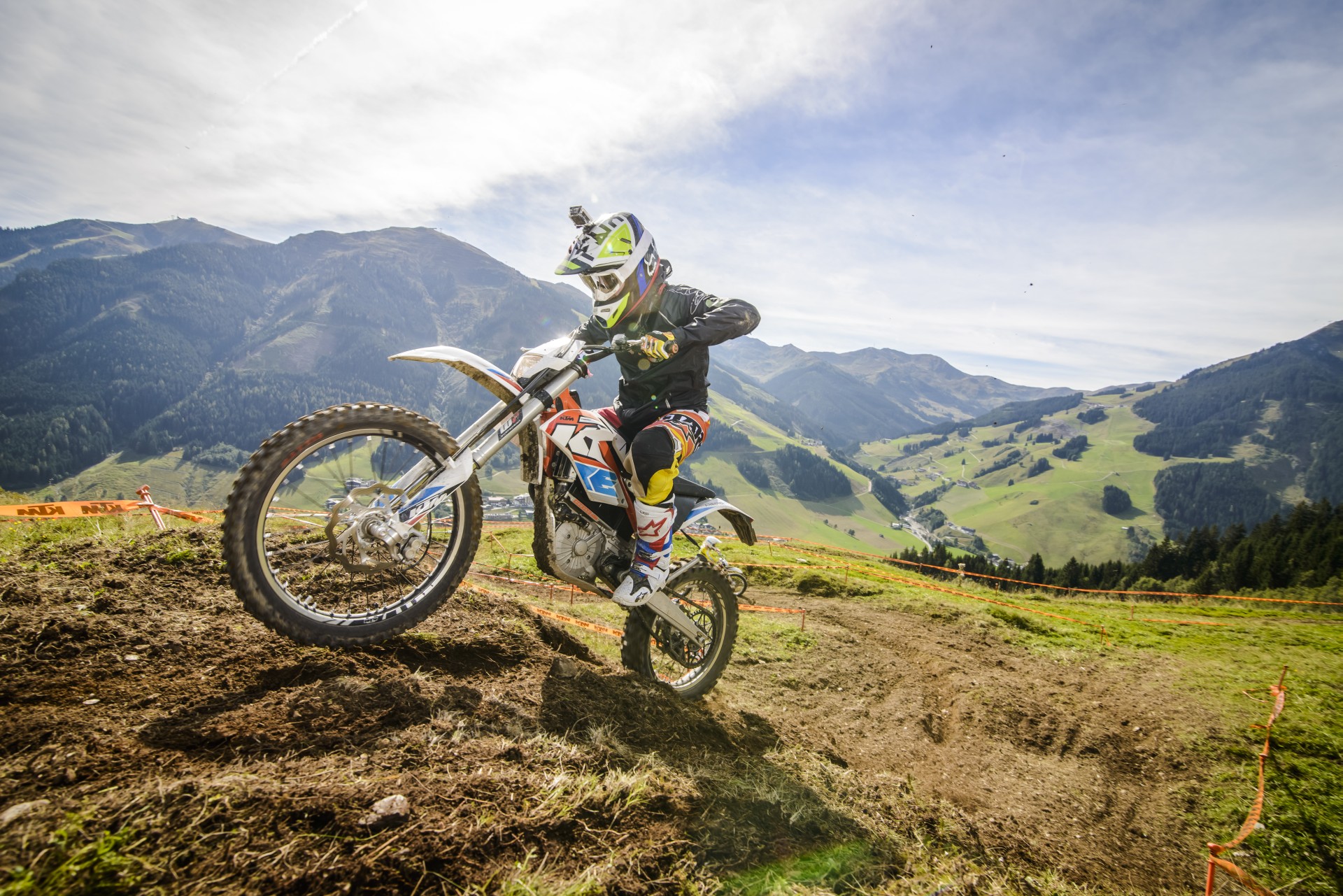 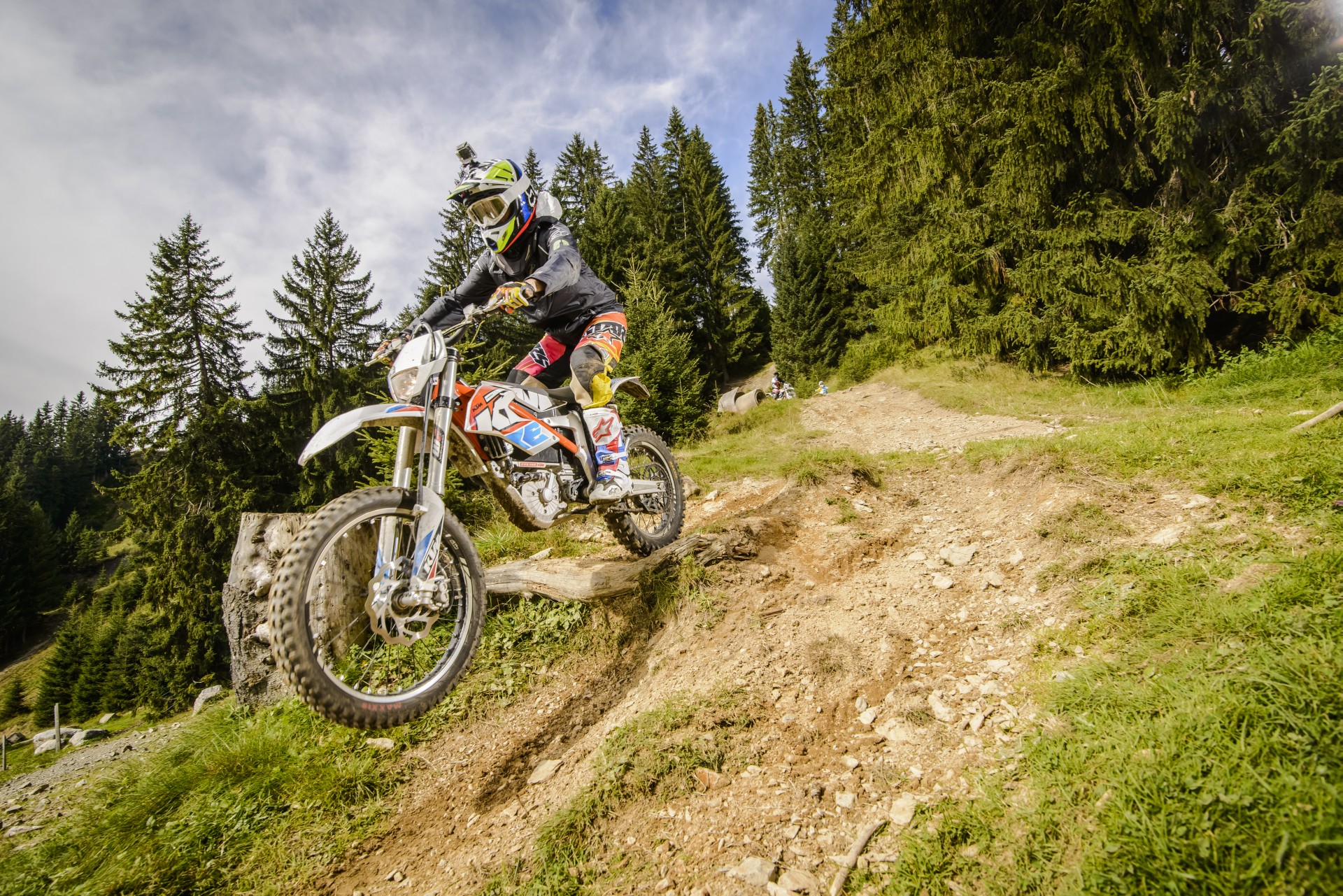 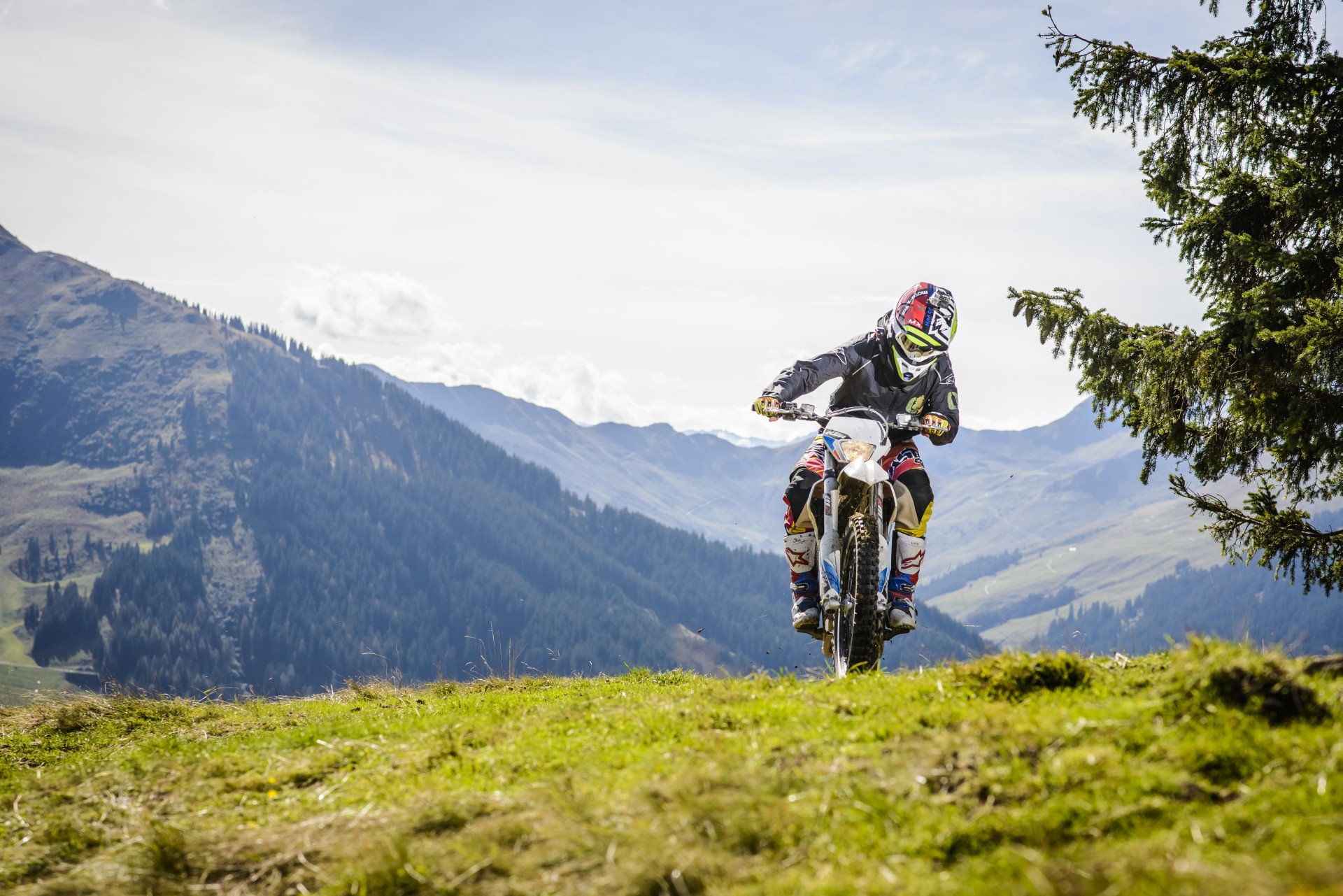 2. Low operating costs
One of the – if not perhaps the strongest – reasons that hit us to consider the FREERIDE E as a serious alternative form for offroad sport has to do with cost. Sauer rightfully points out that the battery powered motor is “the most expensive part of the bike … not only for the customer but also for us,” and reveals that KTM have invested millions into the project since their initial work with Austrian cell specialists back in 2007. However compared to a traditional motorcycle the FREERIDE E presents an overwhelming case for the rider. The engine maintenance expense is almost zero, just the price of 150ml of oil every fifty hours (no rebuilds or tuning required). No need to worry about the cost of petrol and an 80 minute recharge of the battery will set the owner back by 0.8 of a euro.

The battery is the very heart of the water-cooled magnetic synchronous motor. A hard and throttle-heavy blast will have the power gauge right down after 30 minutes. A more refined ride will see it last 2 hours. The batteries are guaranteed by KTM for three years and the motorcycle has been designed in such a way that a fresh unit can be swapped into the top of the bike in 30 seconds. The Austrians have arrived to a level of output and performance that they will create the leading sport e-product on the market. This is thanks to 100 models that have already been used and abused in similar locations to Saalbach throughout central Europe. The 20 members of the company’s 300 in R&D dedicated entirely to electric concept have counted on the feedback and experience accumulated by 5000 different riders with more than 10000 riding hours.

We had the battery swapped twice in three different riding stints that included three downhill runs, four mountain climbs and various laps around a motocross track (with a couple of crashes thrown in for good measure). As long as you’re prepared to stop and charge the bike as well as your own energy levels during a day-outing then there is no reason why you should be concerned about running out of juice.

Anyone who owns an iDevice might be concerned about battery life. Well, KTM informed us that after 700 cycles (where the battery has run down and has been fully charged) then there was still more than 80% of performance. 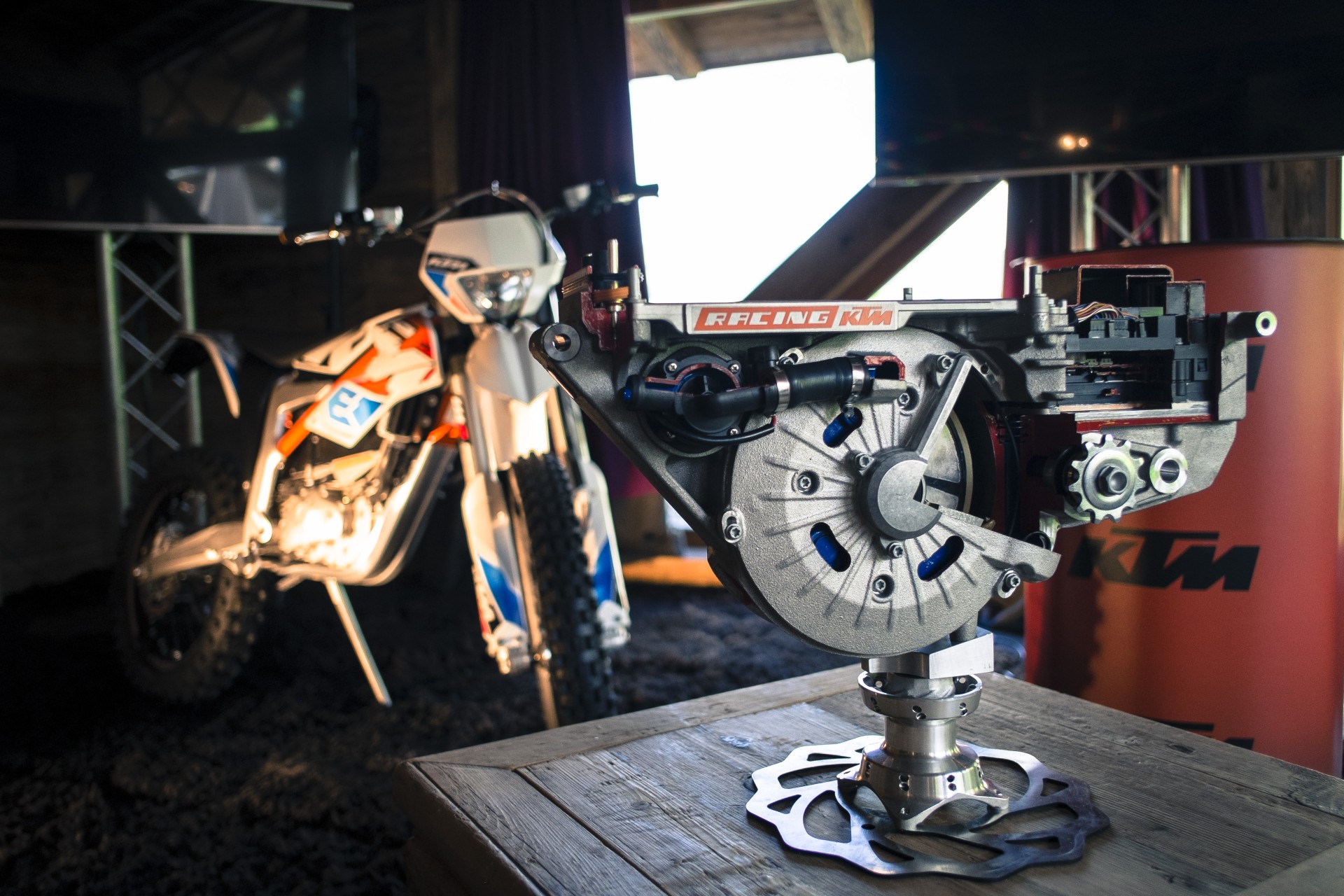 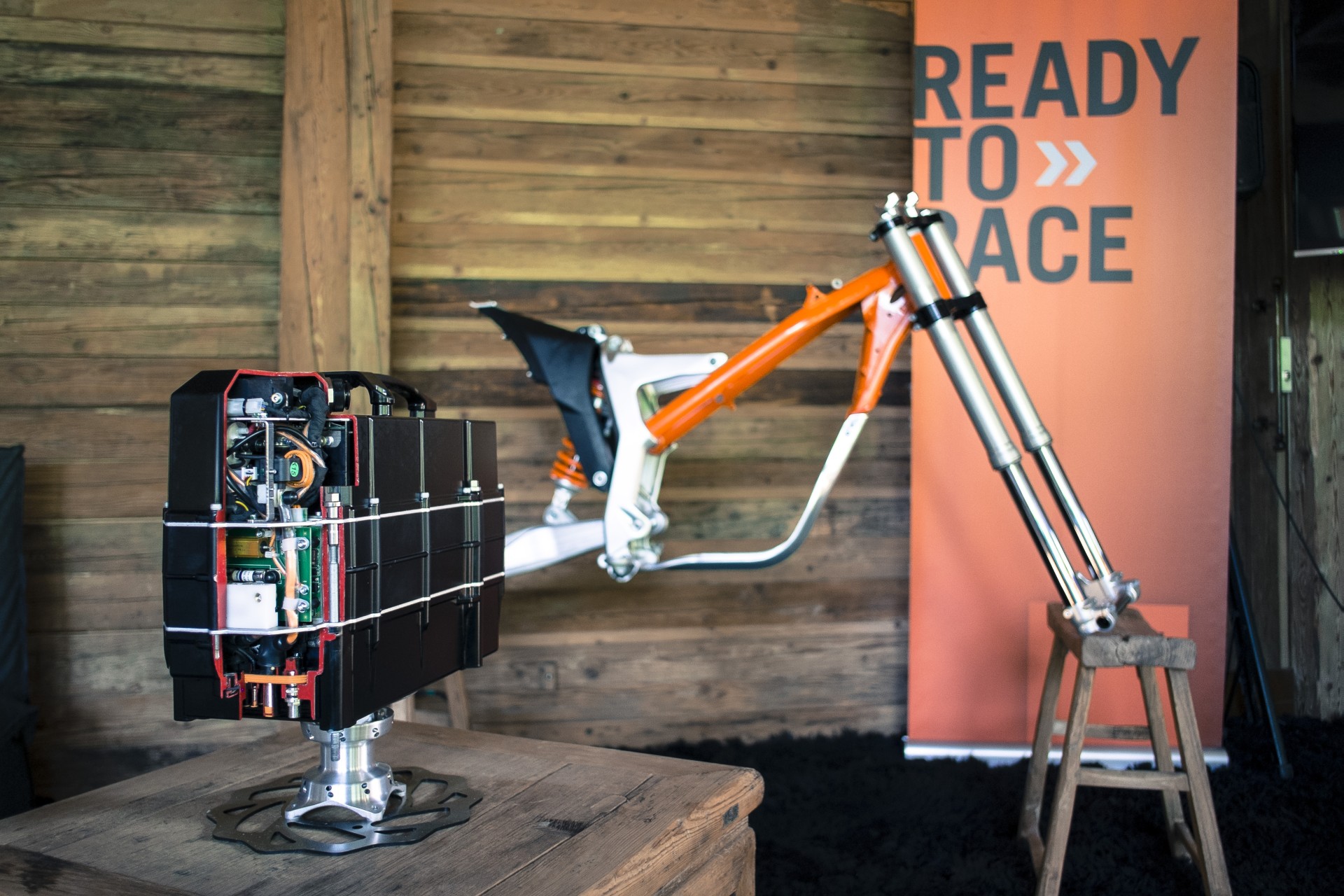 3. The ‘thing to have’
To draw another parallel to Apple there is a strong feeling that the FREERIDE E will gather a hefty sensation of ‘cool’. Whether it is watching Enduro star Andreas ‘Letti’ Lettenbichler bounce around on rocks like a Trial expert, MacAskill balancing on one wheel, car drivers staring in bemusement as this almost silent blur whizzes past on the road, a purposeful design by KISKA or the look on your companion’s face as it becomes possible to ride and have a conversation at the same time; there are many small facets of this product that will stand ideas of normal motorcycling on it’s head. KTM talk about widening the appeal and attraction of biking to almost everybody and bringing offroad sport machines closer to urban spaces but there is little doubt that the FREERIDE E’s versatility almost brings it into the realm of being another ‘gadget’ (it nearly makes you wonder why the manufacturer did not design a space on the bike to store a Samsung, HTC or iPhone). KTM’s comprehensive PowerWear and PowerParts catalogues already have some ‘trick’ items and upgrades for the upcoming ‘E’ fanbase.

We have to admit that the tone of the media launch in Austria (where the FREERIDE will initially be Euro-centric due to homologation and a direct marketing push) was geared towards the FREERIDE E being the first symbolic push by KTM into a significant electric era. A SM Supermoto teaser was unveiled for the near future – the KTM Scooter concept had already been ‘dropped’ last year – and you have to wonder how long it will be before lithium cell technology develops so much that we might be able to consider an E-powered SUPER DUKE in years to come. An electric Beast?! Shocking … 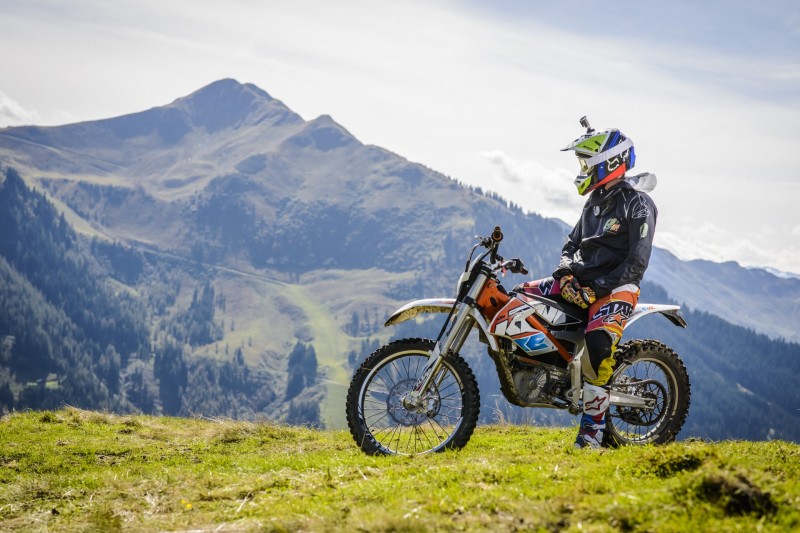 260 Responses to Three reasons to love the KTM FREERIDE E