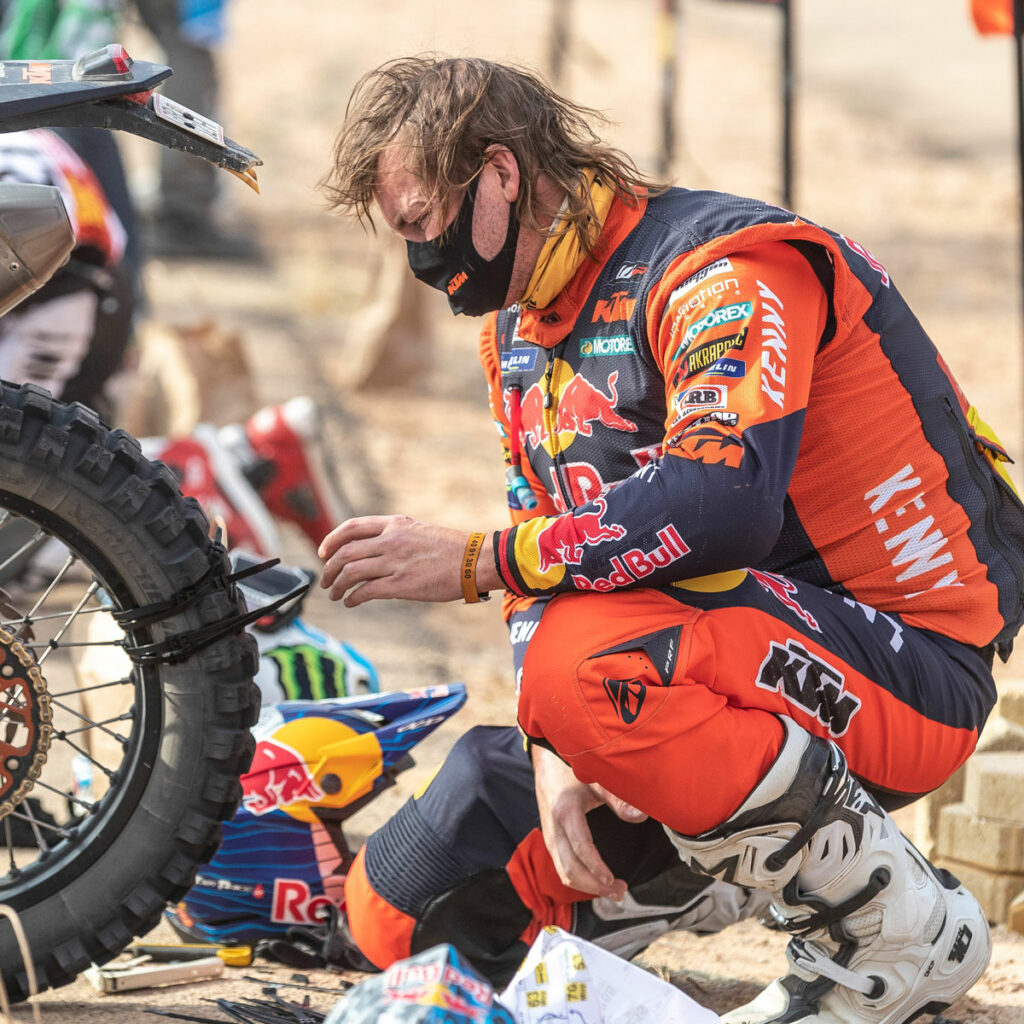 Toby Price: Training in Dubai, prepping for the big one and a passion for all things mechanical

As you’re preparing for your new year celebrations, spare a thought for Red Bull KTM Factory Racing’s Toby Price. An offroad legend, Dakar winner and globally loved racer, Toby is in the final stages of prep for the biggest event on the calendar, the Dakar rally, having spent the last few months living in a hotel room. We caught up with the Aussie just a short time ago to talk about hotel food, training for the big one and a passion for all things mechanical.

“It’s been a pretty rough year. Dakar was going well in January. We were sitting in second, fighting for a podium and unfortunately on stage nine a crash cancelled all that for us. My shoulder took a lot longer than expected (to recover) three surgeries and it wasn’t perfect heading into the Dubai trip, but it’s enough to be able to hold together to go riding,” explained Toby.

“We’re doing the thing that’s ‘normal’ now with the Australian Covid rules. I can’t really go home back to Australia with the quarantine so I’ve been in Dubai now since October and I won’t be going home until January after Dakar. Everything has been good, we’ve released the new bike (the KTM 450 RALLY). We’ve been working on that and making improvements, and being in Dubai has given me more bike time which has been what I’ve needed.”

While it may sound glamorous for many, travel is one of the most challenging parts of being involved in racing – living in a hotel room for months may sound easy, but with few nearby friends and family 14 hours away by plane, Toby made a big commitment for Dakar 2021, which also was book-ended with a quarantine once he made it back to Australia. Having started riding again in June, he is doing the same again this year to ensure he’s in the best possible shape for Dakar 2022.

“There’s one benefit to it, I don’t have to make my bed and I get some fresh towels every day (laughs). Yea last year I had five months living in a hotel room, and hotel food gets pretty boring pretty quickly! Just being away from family and friends – last year was pretty tough, I missed my brother’s first born child and things like that. So, I’m uncle Toby now (laughs). It’s definitely tough, a lot of people don’t know the preparation that goes into this race. I’m 90% for sure living the dream, but that 10% we’re missing with family time, especially at this time of year, and yea I have a lot of friends around the world, but it’s just not like home. The hotel living gets old pretty quickly and with the time difference it’s difficult to even connect back to say hi. But it’s what I need to do.”

“We did it last year and unfortunately (because of covid) we’re doing it again in 2021 and it was a lot of sacrifice and not the result we wanted at Dakar. It is what it is and unfortunately we know what the consequences can be, but yea it’s been a little bit harder. It’s not just the injury, it hurts more in the chest, kinda more on the left side (winks) when you’ve been away from home so long and that’s the result!”

We did ask if Toby could have switched hotels to make it more exciting this time round, but with its proximity to the desert for riding and training, and how close it is to Dubai city for a bit of ‘tourist’ time makes it the best base during his time there. But why doesn’t he stay home to train – it’s Australia, surely there’s plenty of room to ride a rally bike?

“For sure there’s plenty of areas and spaces to go riding in Australia, but it’s more motocross enduro style riding, and no navigation or road book training, which is so important for Dakar. We used to have an Australian safari back in Australia which was on the Perth side in Western Australia, but yea unfortunately the race came to a stop in like 2014, just before I started doing rally racing. Rally racing in Australia is not a common sport, but we have a good fan base that follows along with the rallies and they follow us, although the people that show an interest don’t get involved in it or the systems to be able to put on events in Australia.”

“There is a really big benefit to being in the states, here in Dubai or Morocco or Spain area (US, Morocco and Spain have been more restricted during the pandemic than Dubai). Those locations are much easier for road book training as that’s where the Europeans go, it’s also growing in the US. To be here in Dubai it’s a massive positive and bonus because there’s a lot of road books, other rally riders here, it’s kind of set-up for it, and it makes sense for training. Also the team have been coming here for testing, as the other locations we use are also difficult at the moment for us all to travel to because of Covid.”

We asked Toby about other sports and entertainment while he’s in Dubai, it’s a big holiday location – surely, it’s not all just work, work, work?

“We do get a bit of downtime here – we go play a bit of basketball here and there but we definitely aren’t going to be getting any MBA contracts anytime soon! Whatever we can get involved in, we try and get our training and riding in the morning, so we can have free time or play time in the afternoon. We can go ride some jet skis, flight boards, some fun too – we can find things to do for a bit of fun! It’s not all work, we have to get out to do some stuff too.”

It’s a necessity to be well prepared for the Dakar. Approximately 8,000km of varied terrain in 14 days with just one rest day. It requires long days on the bike from early in the morning to the evening, and an intense pace with challenging navigation – it’s a world famous event and the highlight of the year for rally riders.

“For me winning the Dakar, well it’s a race that everyone prepares for all year. You basically train and prepare 365 days to get to that point to have that trophy in your hand. It takes a lot of work and a lot of sacrifice. This is what we’re working for and with the Red Bull KTM Factory Racing team everyone puts everything into this. The goal is always to be on the top step at the end of the race,” said Toby, who entered his first Dakar in 2015 and has had two wins and two podiums at the event.

Looking back to Dakar 2021, if you’re interested in rally racing you’ve probably heard about Toby’s bush mechanic skills – referring to his mad yet reliable fix on a tyre he had gashed on a rock at the last Dakar, where he used cable ties and whatever he could find in the marathon stage, where no outside assistance is allowed overnight, to stay in the race. It was legendary stuff, and amazingly the makeshift fix held out for 709km the next day for Toby to finish second in the stage….

“At the moment I still get tagged in some crazy dodgy pictures (from people replicating the bush mechanic) I’ve been waiting for a lawsuit on my office desk saying hey you fixed it like this and I tried it and it didn’t work’.” Laughed Toby.

While that repair was seen and watched by the entire world, Toby’s impressive skills have saved the day on a number of occasions before – including fixing a tyre on the team’s Dakar truck when it was stuck in situ.

“Yea, there was the inflating tyres on a Dakar truck, I was worried about that one – there’s some expensive parts on that truck and if it went wrong it could have been bad! I had done it a few times before back home and it worked, but never tried it on such a big tyre.. honestly for the time the tyre was flat, for three hours I had gone riding and when I came back they were still trying to get it inflated, yea I said there’s a quick fix! We can explode the tyre onto the rim. The boys didn’t believe me, I started out pretty softly with the fluid and slowly started to build up so it didn’t explode on us I think third try we did it, and saved the day. Tyre was pumped up! Done and dusted! Hefty invoice for that one……” (we just say don’t try this at home!).

“Thing is, when you’re put into a situation where you need to fix something to get going again I’ll try anything, gaffa tape – MacGyver style, I’ll use sticks, steel rods, whatever is available, you just got to be creative and let the mind run free a bit.. mine does that a lot (laughs) – in those situations you need to improvise a fair bit. But yea from Dakar last year and the bush mechanic I still get a couple of inboxes per day of people fixing things which is cool and entertaining.”

Toby grew up 60km from the nearest town, and while he said he was good at school, he spent a lot of time looking out of the window thinking about dirtbikes and dirtbike tracks. He also was used to fixing stuff – living on a farm in Hillston, Australia, he was often found helping his dad getting things going again until they could get to town to get the parts needed. It was this and a ‘no quit’ mentality that set him up perfectly for races such as the Dakar.

“If it’s broke we’re going to fix it – you know you pick that up from your parents – I’ve seen my dad buy the worst looking sh**box lawnmowers and you’re just like ‘Dad, ten dollars why did you buy that piece of sh**’ and a week later in the shed you pull the string and it runs first time. It’s the older generation, nowawdays if it’s broke we just throw it in the bin – if it’s 200 dollars for a new one or 180 to fix it everyone is like 20 bucks extra I’ll get rid of it and get a new one.  I like mechanical things, I like to know how things work and function and if it breaks I need to make that little bracket there and cut it out of a piece of steel and drill a hole in it and make it work. I have my cars and I love being in the workshop, I live there so I’m always in the workshop fixing something, making something, trying to design something making things bigger and better, it’s such a satisfying thing,” concluded Toby.

Let’s hope Toby doesn’t need to bring those skills into play for the next Dakar, which begins in just a few days time where he’ll be looking to clinch his third Dakar victory with the KTM 450 RALLY!

One Response to Toby Price: Training in Dubai, prepping for the big one and a passion for all things mechanical