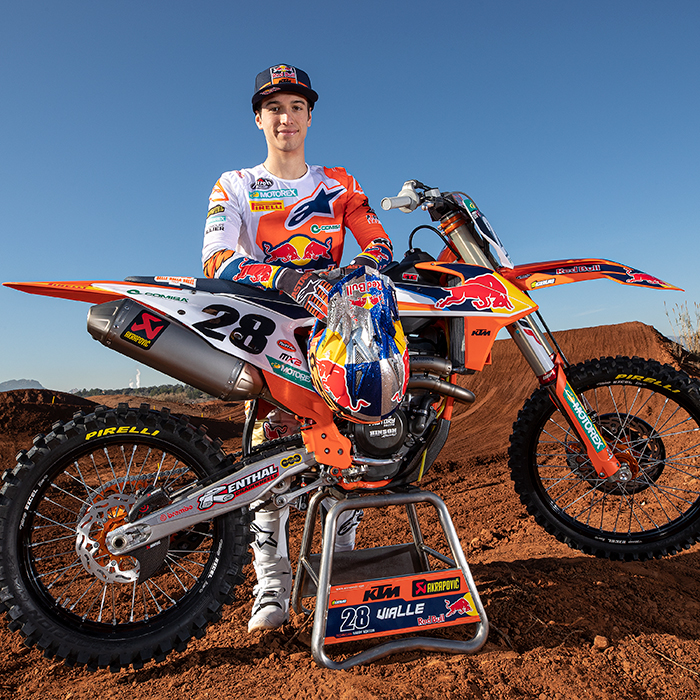 19-year old Tom Vialle’s transition from middling European Championship racer to FIM World Championship leader in less than 18 months is one of the biggest stories in MXGP right now. How did the Frenchman make the jump?

In the summer of 2018 Tom Vialle was known for being a small, occasionally fast rider in the EMX250 European Championship: the feeder series to the FIM Motocross World Championship and the MX2 class. In fact, he was better known for being the son of former Grand Prix winner Frederic Vialle. The teenager had potential however and had veered onto KTM’s radar.

When Red Bull KTM’s Jorge Prado claimed the first of two MX2 world titles in 2018 his factory teammate, and 2017 winner, Pauls Jonass elected to move into the MXGP category. A space opened up in the factory MX2 line-up. KTM already had one of the best riders in the division on a KTM 250 SX-F with the Spaniard, so it was time to look around for the next new talent to plug into the pipeline. There were two issues. Firstly, there was no outstanding and obvious candidates, and secondly, being a Red Bull KTM athlete meant stepping into the pressure cooker: since 2004 and the invention of MX2 from the old 125cc class Red Bull KTM had won all but four years. That’s 12 championships with 8 different riders.

KTM decided to have a ‘trial’ of sorts. Red Bull KTM Factory Racing Motocross Sports Director Joel Smets and KTM VP of Offroad Motorsports Robert Jonas drew up a shortlist and Vialle’s name was in the reckoning. “At Assen [the Dutch GP in September 2018] we talked a little bit; Robert said they were interested in me but there was a list of three-four riders and I wasn’t alone and it would be good to do a test with Joel Smets in Belgium,” Vialle recalls now. It was first taste of factory-level anticipation as the youngster rode with several other hopefuls.

“I think it was two weeks later that I went to Belgium with my Dad. We rode one day on hard-pack and one day in the sand at Lommel. Joel was really cool. There was not so much stress. He told me just to ride and practice and he’d watch. I saw him trackside sometimes, sometimes not! He was just observing. On the third day we did some physical training: running and some tests. When we finished we had a little discussion. The Motocross of Nations was coming up and it was already late to have something confirmed for 2019, although Robert had told me in Assen that KTM would like to keep me and would help with an arrangement for 2019 if I wasn’t in Red Bull KTM. We were happy that the factory wanted to follow us…but there were not many teams and places around. We were a bit worried.”

Smets was impressed by Vialle’s technique and his attitude, even if he did recognize that the rider needed to work on his conditioning. “The motos were shorter for me in 2018, so it meant I had never trained so much!” Tom says. “My Dad didn’t encourage me to train – this was only four years ago! – because he said when I would arrive to GPs then I’d have to do it very hard. I was doing some cycling but nothing more. The minimum. I never did a strict program or worked with a trainer.”

Smets believed Vialle was worth the investment of time, energy, tuition as well as a contract. “The Nations passed and I think it was on the Monday or the Tuesday after that we had an email, early evening, saying ‘after a lot of thought we decided to choose you’,” Vialle smiles now at the memory. “We went out to a restaurant to celebrate! At the time you don’t fully realize what it means: to join this team and be the teammate of Jeffrey, Tony and Jorge. It was a bit crazy.”

“I think part of the contract was to move to Belgium and start training with Joel,” he adds. “To be based in Lommel where the training set-up would be. It was easy to do that, and it all moved quite fast. I tried the bike on November 1st, we started to train and then went practicing for some time at the Red Sands track in Spain.”

Vialle’s impact was swift. His rapid education bore fruit as his stature and technique suited the power of the factory bike and he was soon lapping with Prado, and (again) installing two orange bikes near the front of MX2. He had a virulent penchant for holeshots, captured two podiums (of a final total of seven for the year) in the first four rounds, won the Grand Prix of Sweden and finished 4th in the world. The rise of #28 was not the story of a cocky eighteen-year old full of belief. In fact, his modesty makes the ascension to the top even more remarkable. “In 2018 I was watching Jorge and Pauls Jonass fighting for the championship while thinking ‘they are going so fast’,” he says. “I never thought I could ride like that, actually. I knew I was good…but I never thought I could be as fast and get near their level.”

So how did he do it? With Smets’ input Vialle started to live, work and breathe like a world champion in the making. “He would have made progress with whoever he worked with…but his training was not structured,” Smets offers. “Tom is not a lazy guy but riders from the south – in my experience – have always seemed to have the speed but not the work ethic or the knowledge to put in the right amount of work.”

“So, we put structure and content into his training, even if that wasn’t the main priority from the beginning,” the former five-times world champion says. “It was more about bringing a system into his life and living as a top athlete. It wasn’t easy. I don’t want to overstate my own role but one strength I had in my career was being able to analyze situations and find solutions. We did that with Tom and we actually took it quite easy in the beginning in terms of volume and intensity. He soon had a routine, got used to it and then we made a step for 2020. He looks like he has dealt with it quite well.”

“Training: I’ve never done so much,” Vialle evaluates. “I do it with the timetable for a full-time job, but it is not really a ‘job’ to have to wake-up and go running. I do it six days a week morning and afternoon with only one day rest. When you do one year like then you feel the difference. You feel strong.”

“Joel was actually my first official trainer,” he explains. “We were working together almost every day the previous winter and I had a good feeling with him after a few days. He always has a positive attitude. He is not one of these trainers that highlights all the bad things you have done in a race. Even if you finish 15th then he’ll find something. That approach is important to me and I really like to work in that way. My Dad never pushed me. In fact, I can only remember him being angry once after a race. I didn’t understand why because it was the first time in 10 years that he came back to the paddock like that! Joel has a lot of experience and is super-professional. It’s a good relationship.”

Vialle is now having to deal with expectation from all sides: the brand, the sponsors, the fans. He’s on social media but claims not to “live on it”. He narrowly missed a career-defining selection for the 2019 Motocross of Nations team. In 2020 he has already won two from five Grands Prix and has held the red plate as series leader since round two. “Character-wise, Tom is not a daydreamer,” comments Smets. “Since he’s had the red plate, he is not a person who thinks ‘I’ve done it’. We’ve seen examples of riders who have won a GP or fought with the reigning champion and become ‘lost’. For some reason, maybe some results or a factory contract, they think they have made it and slip away. It almost scares me how confident and relaxed he is. My next task will be to watch over that and see that he stays focused.”

Physically fitter, more experienced, more in-tune with the dynamic of a factory team: Vialle is becoming a very potent package indeed. He still faces a big hurdle and that’s handling the mental stress of carrying Red Bull KTM’s championship hopes. It is a role he has assumed so quickly that it’s hard to believe it is such an easy responsibility to bear. Vialle’s natural mentality and his grounded personality seems to be another asset.

“Since I was small I was always in the pack, near the back,” he says. “When I raced in the European 85s I couldn’t follow riders like Jago [Geerts, principal rival for 2020] or Jorge for more than three corners! I was finishing 8th, 9th, 10th while they were always in the top three. I was seconds behind them in Timed Practice. They were really a big step ahead. So now I’ve moved forward really quickly to be with them. Jago would always beat me in every race, in fact I’m sure he didn’t know who I was. Now we are fighting together for GP wins.”

“When I signed for KTM I knew I would have to work and train a lot, and after a few races went well I thought ‘I’m actually not that far’,” he remembers. “My goal was to run as close to the front of MX2 this year but to already be leading the championship so early in the season was never in my agenda!”

“He is realistic and honest and he was an average European Championship rider who signed that factory deal and realized right away that it meant the start of the hard work,” underlines Smets. “That approach is a big part of his ‘secret’ or his success so far. He approaches that red number plate in the same way. When we started riding after the lockdown he had that plate on his training bike and I thought ‘maybe we should take it off’ but the kid doesn’t seem to be worried about it. He knows the plate means nothing at all. It’s just another color. He understands that leading the championship now doesn’t mean anything if you are not doing it at the end of the year.”

“The mentality is just to enjoy [the job],” Vialle concludes. “If you can take the starts, and enjoy the riding then this can only help…thinking too much won’t.”

If there is another stark example of Vialle’s ability to learn and excel then it’s with his level of English. He conducts a twenty-minute interview with confidence and enthusiasm. It’s a startling change from the shy rookie who could barely manage a few heavily-accented words in 2019. “I never opened one book,” he smiles. “Last year I knew ‘hello’ and ‘goodbye’, ‘good’ and ‘not good’ some s****y things! I didn’t make so much progress in the first winter because I was talking with Joel in French. I didn’t talk much with Jeffrey because I couldn’t. When I arrived at the first GP and my mechanic can only talk in English – wow, it was really difficult. My Dad’s English was also not great. With Joel and Vale [Ragni, Team Co-Ordinator] I made some progress and then with my girlfriend, Celia, I made another big step because we only spoke in English and she’d help me out with any translation of words from French. And Netflix of course!”

On this current trajectory Tom Vialle will be prompting some essential binge viewing in MXGP for quite some time yet.