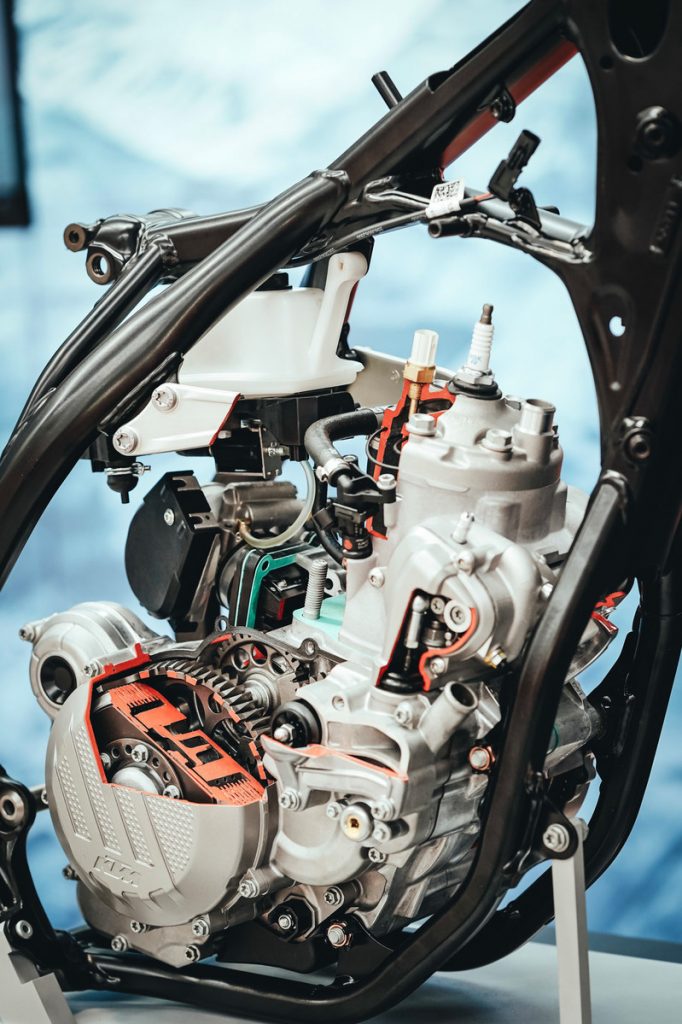 Since the arrival of KTM’s TPI models for 2018, the evolution and development of these fuel injected 2-strokes has been ongoing and a “steep learning curve”. The MY2020 model launch in Bassella, Spain gave chance to check how KTM R&D and the factory racing teams have pushed to improve the new breed … 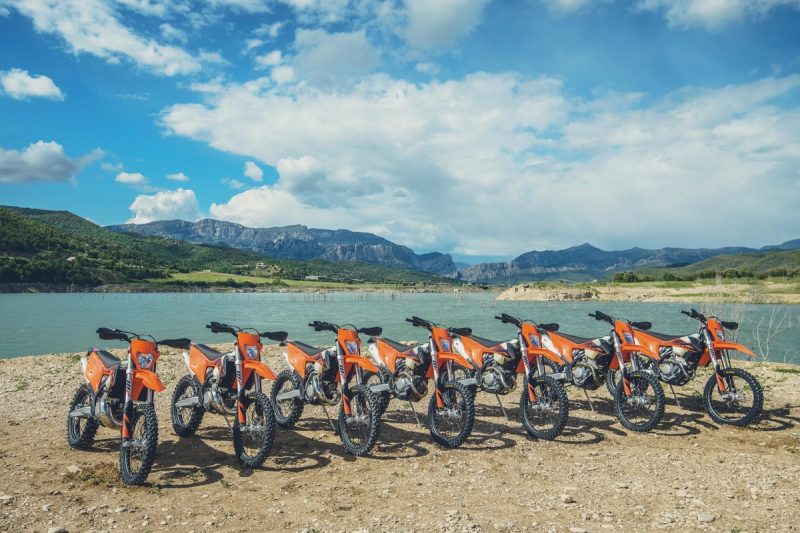 By now we are familiar with the ground-breaking move KTM made in the enduro world for model year 2018 with the introduction of the KTM 250 and 300 EXC TPI models. The transfer port injection engine was a step change in the history of motorcycles, an revolution of the 2-stroke.

That first generation of TPI proved more economically, made life easier with no need to pre-mix fuel and removed the age-old problems of needing to understand and change carburetor jetting to meet weather conditions and altitude. It was a new breed. 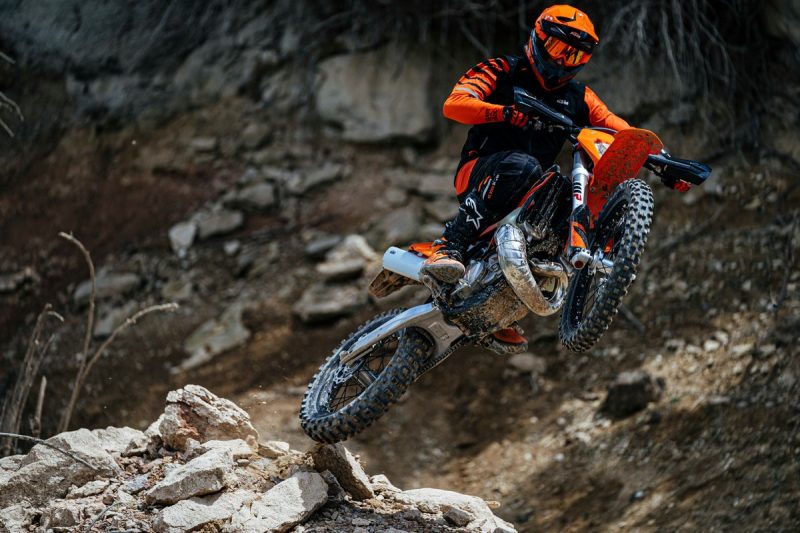 Though an instant success, the R&D team didn’t rest on their laurels. Before the first year of production was complete, they were taking feedback from owners, plus factory racing teams and already improving the TPI.

KTM’s Head of Engine Offroad and Motocross, Michael Viertlmayr, says it has been a steady process of improving the engines ever since and a learning curve that has seen improvements to the hardware and perhaps most importantly, the electronic software controlling the TPI engines.

The racing department played a big part in the evolution of the TPIs since day one. Factory racers like Jonny Walker and Taddy Blazusiak took on the TPIs for the 2018 season with both hands and the bikes immediately proved themselves in the World Enduro Super Series. 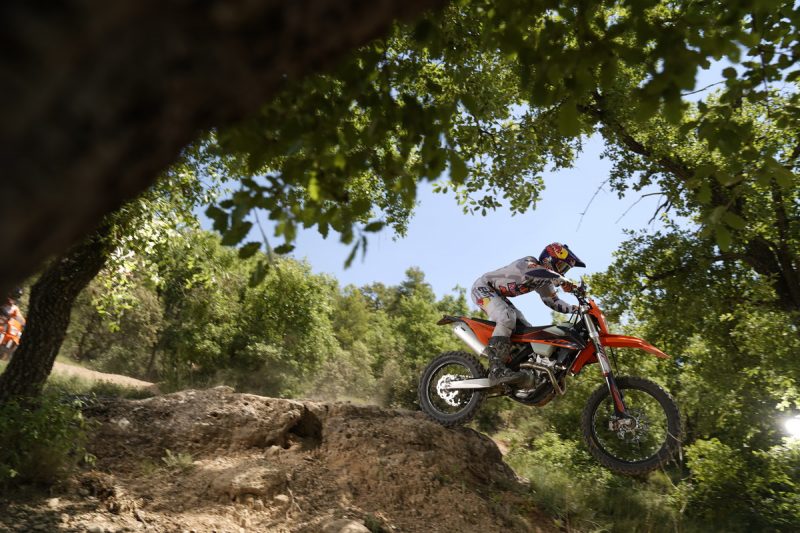 All the time the development of the TPI engine was marching forward and the racing teams played their role helping develop software and mapping to improve that consistency and rider feel for power and rear wheel grip.

Racers always want more bottom power, to be smoother and more controllability so when the racing department meets those demands the knock-on effect also benefits the regular rider and the production machines.

Most obviously we have seen this as new and different engine maps have become available to existing first generation TPI customers to get installed at their KTM dealer.

“I have been working on the development of the TPI bikes nearly almost from day one,” explains Blazusiak. “We had a long process until the TPIs were ready to hit the market with even some bikes that weren’t good to ride, but it’s the same process that happened with four strokes.”

“But it’s a process like everything and in a couple of years we’ll look back asking ourselves ‘how did the carbureted bikes last that long?’” says Taddy. 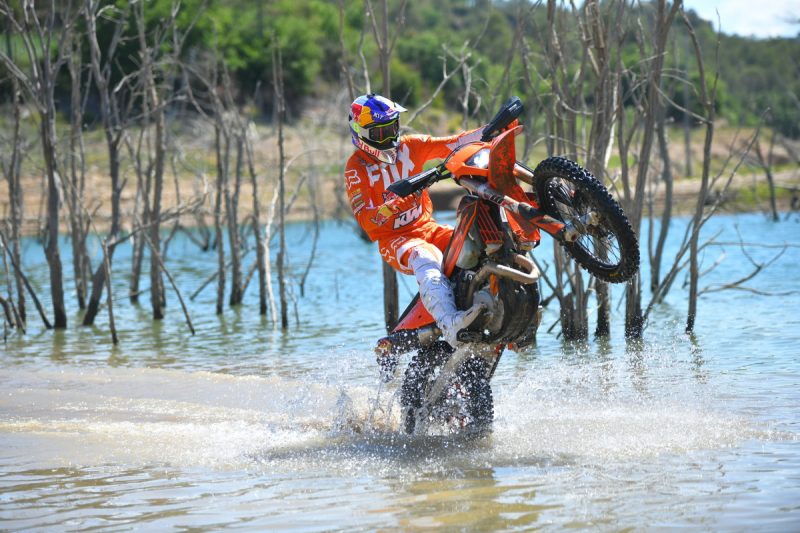 Ringing loud and clear at the MY2020 model launch in May 2019, was the message that the latest fuel injected KTM engines were more ‘on point’. “The tolerances should be minimum and that’s what we have been working on for the new bikes,” says Joachim Sauer. “The TPI technology itself hasn’t changed much, it has improved in performance. It has been an optimization of the bike, now the power valve in the new cylinder is working together perfectly with the new exhaust system, the adding of a new ambient pressure sensor and a new throttle body that gives a more precise power delivery.”

Viertlmayr adds the software is now of equal importance as the hardware in R&D terms and he is quick to point out the mind-boggling number of working hours each one of the 100 software updates the TPI has swallowed up.

The aim, always, is to improve the all-important rider feeling with the bike and this has been a key element for the MY2020 models. Along with a new cylinder head with an increased compression ratio on the 250cc engine, new exhaust port windows for improved precision, new exhaust systems, air filter boxes and ECU mapping we have a “rounding up” of the model as Sauer puts it.

The result is a new generation of TPI models (three now including the all-new KTM 150 EXC TPI) which are somewhere between the first TPI and a carburetor model in feeling.

“We have tried to maintain the positive side from both worlds,” says Viertlmayr, “the controllability and the rich feeling from the carburetor version but the benefits from fuel injection; the clear running, not filling the engine with fuel when going downhill and the immediate and clean response – which lots of people liked from the beginning with the TPI, and I think we have accomplished that with the MY2020 models.”

Where to next in the evolution of the TPI? “We have a lot of ideas and plans to make it even better in the future,” continues Viertlmayr. “We stay pretty hard focused on the development of the 2-stroke TPIs. We are highly focused on lowering the emissions on the bikes and we are also working in close collaboration with the racing department to have an even better rideability.”

It is hard to think of a bolder step in terms of offroad motorcycle development in recent times than the transfer port injection, 2-stroke engines. In a world that is increasingly all enveloped by software and technology, the KTM EXC TPIs stand at the front of the queue pushing to take offroad motorcycles forward for the next generation. 203 Responses to TPI engine development for enduro – improving the breed