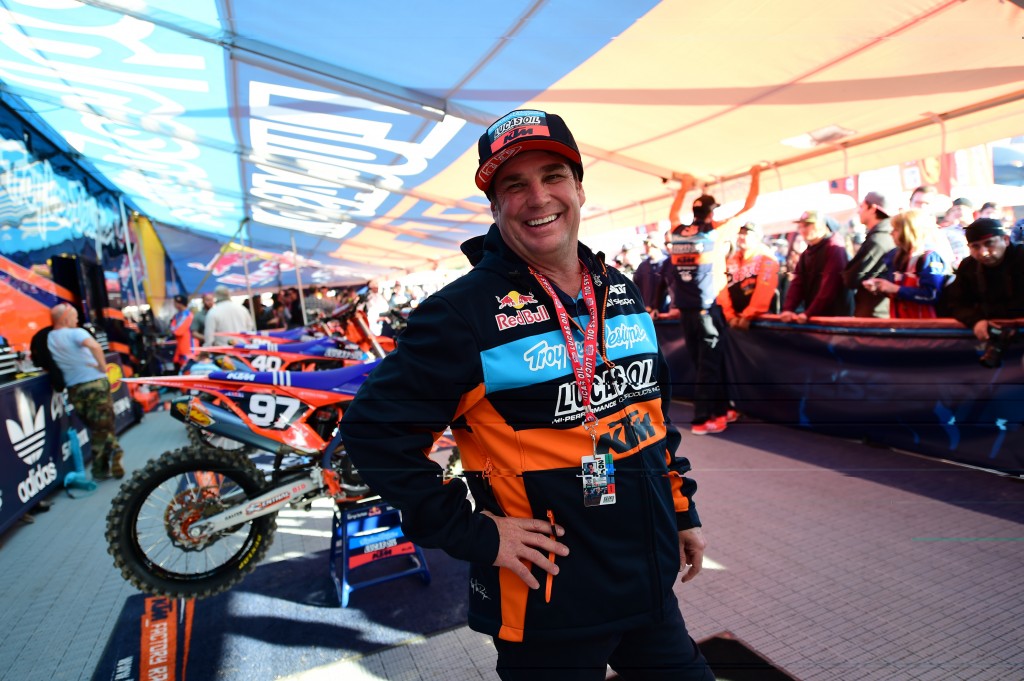 Troy Lee is a huge name in offroad. The former racer began his business painting helmets 33 years ago, before starting his own motocross race team in 2004, which has had varying success.

The TLD brand is renowned worldwide for making quality helmets and gear, so with the company’s success, Troy himself wanted to put something back into the sport he loves. This year sees another twist in the story, as Troy became part of the KTM family when the team switched manufacturers with its sights set on championship glory. We caught up with Troy to find out about the deal and going orange.

“The overall plan when we started the team was to put something back into the sport that I’m so passionate about. It was nice delivering helmets and gear to the riders at the races, but I just wanted to expand it. I always looked at Roger Penske in F1 and wanted to do the same in Supercross.”

“KTM has won a lot of championships just with the electric starter alone, and Roger (De Coster) would joke with me about it after the races. I really want to win a championship; I’ve got a lot of respect for Roger, and I’ve known him a long time, then I met Jon-Erik (Burleson, President of KTM North America) who kept hounding me to talk to KTM. We got talking more and more, and the more I talked with both of them I got a really good feeling, especially with their philosophy of it being racing first, and lets sell bikes later.”

“It was hard leaving Honda, after such a long relationship, but it’s more important to me than anything to win a championship and I feel KTM is the hungriest brand out there, so with the opportunity they were offering, I wanted to be with them.” 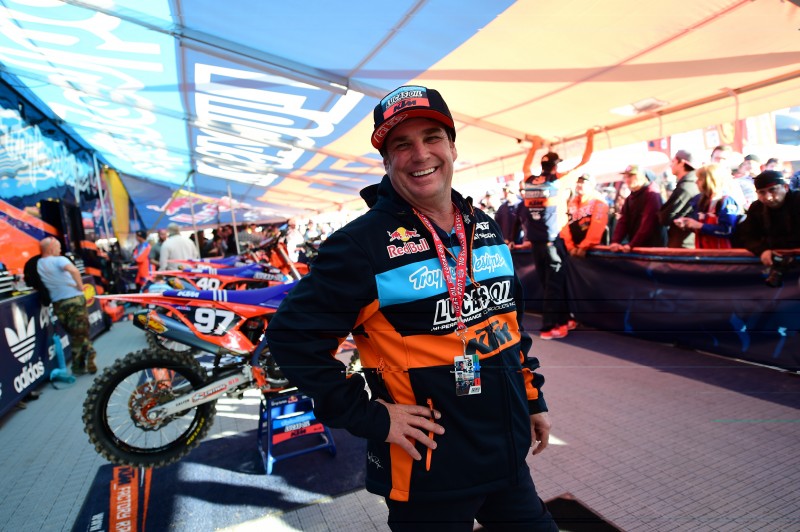 Troy competed on KTM machinery in his younger years when he raced Supercross and AMA Nationals, as he has come from a family of motorsport enthusiasts. His dad, who raced speedway, was an artist and his grandfather was a pinstriper. His grandfather raced Bonneville, so racing was well and truly in the blood, and Troy said he was unable to get away from the fact that he would follow in their footsteps. With the skills he had as a designer, he was able to combine both of his passions into his daily work. To be able to run a business involved in the sport he loves, and then go into racing means Troy describes himself as ‘the luckiest person on the planet.’

“I started painting helmets because when I was racing Jeff Ward and Ricky Johnson were my friends and I did some for them. Every time I got hurt I thought well at least I can paint some helmets and then I could go to the races to paint helmets for the likes of Jeremy McGrath and Ricky Carmichael. Then I started making some gloves, which was fun, then some decals and some t-shirts and then gear. I started going into the bicycle market and it’s just continued to grow.”

“I think the main thing is that I chase my passion, because if you chase your passion then you should do a good job. I don’t want to do a mediocre job. I try to make sure we do a good job, and we’re a premium brand. All my artists, 16 in total that work for me, know that I don’t want to make a product if we can’t make it better. I feel KTM has the same attitude; if we’re going to do it then we’re going to do it better than everyone else.”

With a very short time to switch brands and the distance between Corona and KTM’s USA headquarters in Murrieta, the decision was made to move workshops and begin with a new base there. It was also a big step as KTM was also moving onto a new bike, the 2015 KTM 250 SX-F Factory Edition, which had seen some quite major changes over the standard model. 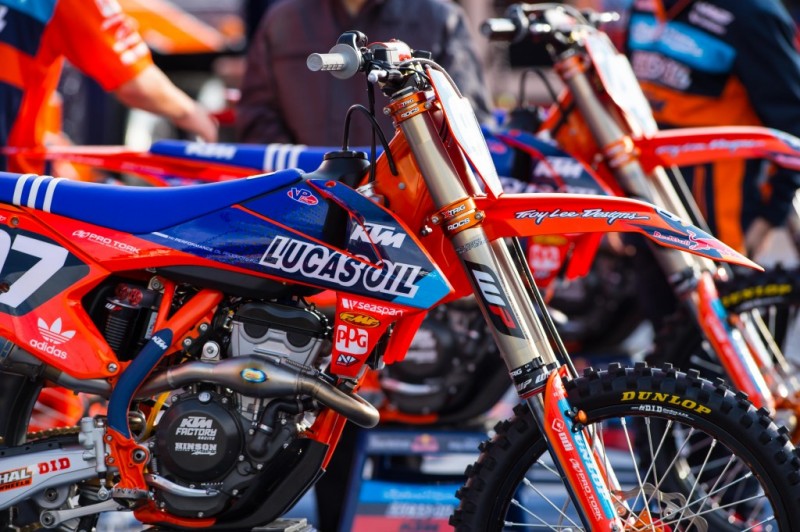 “KTM gave us a workshop out here, FMF is involved too. We have a shop at our facility in Corona but we’re running out of space, so we came out here took a look at it and went with that. I think it’s good because Roger can work closely with Tyler (Keefe) our team manager and it just feels really good. I think we have a great opportunity here, and we are definitely looking to have a long career with KTM.”

“The scariest thing about making the switch was that we knew what Roger, Jon-Erik and everyone was doing was great, but changing bikes was not easy. I listened to Tyler a lot, as he works closely with the guys and as I got hurt last year in a crash on my bike, I was looking at contracts while still on pain pills thinking to myself whether this was the right thing to do. We both went in that direction with KTM, but we didn’t ride the bikes before we signed the contract; we had a lot of faith in Roger De Coster and we’d seen the results (Ryan) Dungey was getting step-by-step. Even if we had to invest for a year or two I felt they could definitely get us to the top.”

This year the team is focussing on the West Coast 250SX championship with Jessy Nelson and Shane McElrath. It’s already kicked off well with Jessy winning round one of the series in Anaheim with two further podiums to date, and Shane McElrath making his first trip to the podium in San Diego. Going into the break (as the East Coast 250SX series takes place) Nelson is second in the standings and McElrath is fifth. Darryn Durham had to sit out of proceedings due to surgery required to repair a bent screw in his wrist early in the season.

“We signed Darryn Durham this year and he’s definitely a podium guy whose capable of championships, then Jessy Nelson just keeps getting faster and better every year. He won a moto at the outdoors last year, he’s an amazing starter and a great kid; but it’s really important to get the right people as we all travel together so we got to make sure they’re fun with the right personality. I think everyone on our team including Shane McElrath is awesome and we spend a lot of money on them, we invest in them, so I like to hire the right person to represent the sport well.” 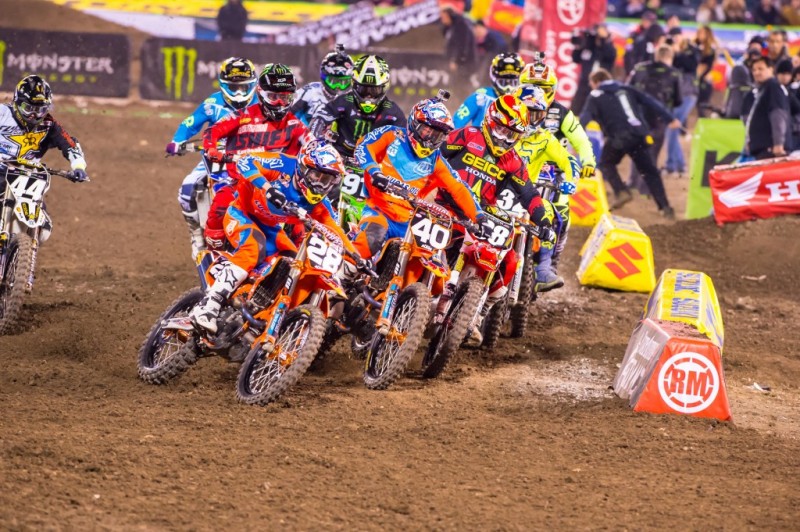 Troy tries to be as hands on as possible despite running a global business, riding himself (and recovering from injury), and keeping an eye on his son’s own riding. He wants to make sure everything performs at its best and looks its best, and with only a short time before the start of the season he had very little time to get the semi painted, new designs for everything and make the switch to KTM.

“At certain times of the year like pre-season everyone is flat out 24/7 making sure the rigs, and bikes and so on are ready. I also flew to Austria to go to the factory and saw the limited rally bikes being built on the production line and the road race bikes for the kids, which was really cool. I feel it’s a lot like our shop as most of the people who work for me ride and play. KTM has been awesome; they gave me an 1190 ADVENTURE, as I can’t ride in the dirt just yet which my wife isn’t so stoked on, but at least I can open the throttle, it’s amazing. The other cool thing too that Roger and Pit Beirer (KTM’s head of motorsports) did is they know my son races and they put two bikes in there for my son. They just kept making everything better for me.”

From a business side Troy and KTM will also benefit, as Troy is designing a clothing line and everything from the bike stands to the bike graphics the t-shirts, which will hopefully include a collection for KTM to sell. Troy really seemed like his passion has had another rejuvenation with this new collaboration (even though it’s clearly not needed) and he’s excited about the future with KTM.

“2015 has started off very strong for the Troy Lee Designs Lucas Oil Red Bull KTM Team. Jessy and Shane have been riding great so far this year and I couldn’t be more proud of them. I can’t thank KTM enough for believing in our program. It’s been a dream come true working with KTM and I’m so impressed with how great the new 2015 250 SX-F Factory Edition is. Shane and Jessy keep telling me how comfortable they are while riding the new bike and for me being a team owner, that makes my life way easier.” 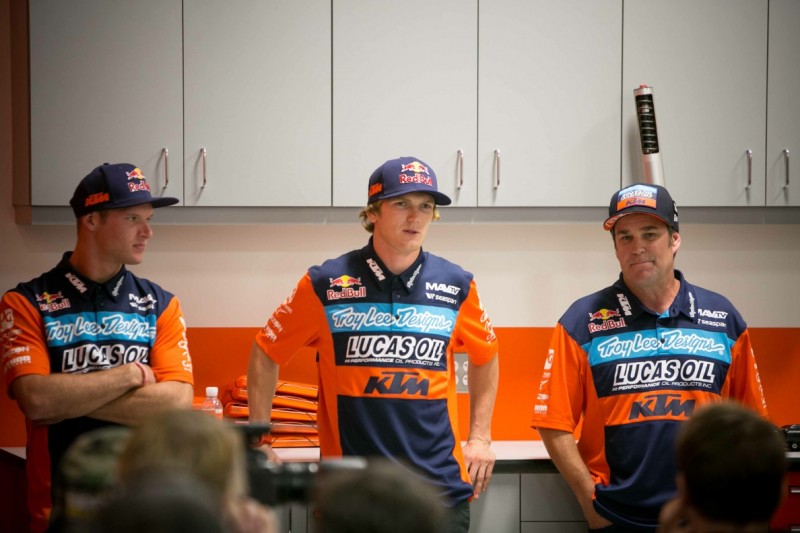