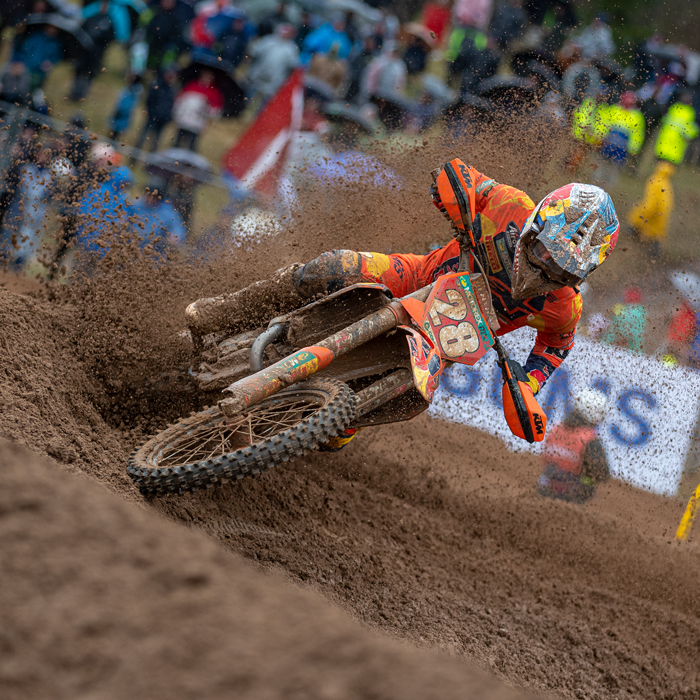 TURNING EXCELLENCE INTO PERFECTION: BUILDING THE 2023 KTM 250 SX-F INTO A GRAND PRIX WINNER

After 12 rounds of the 2022 FIM Motocross World Championship Tom Vialle is fronting the MX2 series with the brand new KTM 250 SX-F. The Frenchman has won seven Grand Prix, led the most laps and scored ten podium finishes from 12 rounds. Although the rigours of motocross mean that the sport can ruin a season for a rider with the smallest of crashes, 2022 has, so far, been a period of busy work but also resounding success for the company with the recently announced latest generation of SX dirtbikes.

Grand Prix riders are on track training and practicing several times a week. They then need to complete Free Practice, Timed Practice, a Qualification Heat and two 30 minute and 2 lap motos on Sunday across diverse terrain like hard-pack, deep, tough ruts, sand, mud, hefty bumps, big jumps and other technical obstacles. Vialle’s factory KTM 250 SX-F is extremely close to the shiny motorcycles parked in KTM authorized dealers except for a few mods to help the 21-year-old aim for holeshots, resist heavy landings and the full ardour of a 20-round world championship. Aside from preparing the production KTM 250 SX-F for MXGP the team also need to customize the bike to Vialle’s style and preference. With the 2021 season ending in mid-November (the latest scheduling ever) and 2022 beginning at the end of February, KTM had very little time to get their development claws into the motorcycle. Vialle’s ankle injury and former teammate Rene Hofer’s tragic passing in December also contributed to the most hectic pre-season for the factory squad in recent years.

To-date Vialle and Red Bull KTM have been able to show just how efficient and competitive the revitalised 2023 KTM 250 SX-F chassis, engine and ergonomic changes have turned out to be. To gauge how the crew – both at the track and in the workshop in Munderfing, Austria – have achieved this we asked Tom’s race mechanic, Harry Norton, and Technical Director Dirk Gruebel about the method…

Harry Norton: We take the standard bike to understand the difference and the areas where the new concept is an improvement. Then we introduce the parts that are specific for the demands of Grand Prix. The first thing is the factory suspension and the settings that are particular to Tom. We have special technical partners, such as Kite and WP and so on, but we build from the production KTM 250 SX-F because it is already a really good platform. From that we need to understand where we need to work because the new stock bike might already be as good as or better than our old race one. It’s a matter of testing and understanding.

Dirk Gruebel: The first thing is the ergonomics and the body position and if it suits the riders. Do we have to make adaptions right away in terms of the seat and footpeg position? That can vary depending on the wishes of the factory rider. This wasn’t a big job at all for Tom but with the bigger, wider and different footpegs it did influence how he stood on the bike. It was still simple to configure. We don’t turn everything upside from the stock bike, in fact far less than you think, but Tom has a factory engine for Grand Prix from which we need feedback on the characteristics and the power supply and then with partners – like exhaust pipe supplier Akrapovic – to move in the direction that we want. For sure, every new bike has its challenges as you begin to learn about its full potential. With suspension you can try to adapt the previous year’s settings but with a new concept like we have now you cannot just plug-and-play. Initial tests are done at home for a direction and then the final confirmation is made by the racer when he feels comfortable.

HN: Obviously, we have a test team in-house, which is really beneficial, and then we can come up with a package that we think can fit Tom’s riding style, such as the engine settings. Tom has been on the team for a few years, so we know what he’s looking for. We’ll present him with a few options based on our findings and then the final work and direction is down to him. This year was tricky because Tom was injured, so he didn’t get to ride the bike until very late in pre-season. We started work with Rene Hofer and he did a lot of pre-work and testing to understand a development direction. When Tom got on the bike – which was only four weeks before round one – there was not as much time as we’d normally like but it was a consequence of his recovery and a very short off-season on this occasion.

DG: Rene did the first set-ups with WP Suspension to get the system ready for Grand Prix. That’s his legacy and he put that direction. Tom was only 80% as the season started and the more races we have, the different tracks that come up and as the speed picks-up among the guys then the more we learn…and we also see that we still have some progress ahead. There is still a development process because the other brands were not sleeping over the winter, and we are on the track to win.

HN: Rene did a lot of the base work and he got it to a really good point for MX2 so when Tom got on the race bike then the level was already very high. Most of the ’23 components are completely different compared to the 2021 GP bike, so it was about discovering basic things like the SAG, spring rates from our old set-ups and so on.

HN: A new bike is never without a learning process, but we managed to get to a good and competitive point quickly. We found a comfortable reference for a few different tracks. People have been really happy with the production bike ergonomics and the riding ‘package’. It makes a lot of grip and the engine has a great power character. We just need to establish the perfect set-up from track to track and that only takes time and some mileage.

DG: In terms of racing, we came from a very good generation of KTM SX-F that was developed over years and sometimes with only very small updates. The 2023 bike is a bigger task because the concept has changed, and the behaviour of the bike has changed. Some factors went against us: we were slightly delayed with some material; our season was unusually long and Tom was injured. He couldn’t bring us forward and Rene’s riding style was quite different to Tom’s. Time was then running quickly into the first races. With the old bike you know what works in all types of conditions. With this model it is an education in some of the toughest conditions…but this is also another reason why we race. So far it’s been going very well. Tom is quite happy and the results have shown that.

“From the point of view of a mechanic the 2023 model is very different: the tool-less air-filter removal, the tank, the position of the fuel pump and a few other components are better and more reliable. It’s a very different concept and there are very few components that come over from our 2021 bike.”