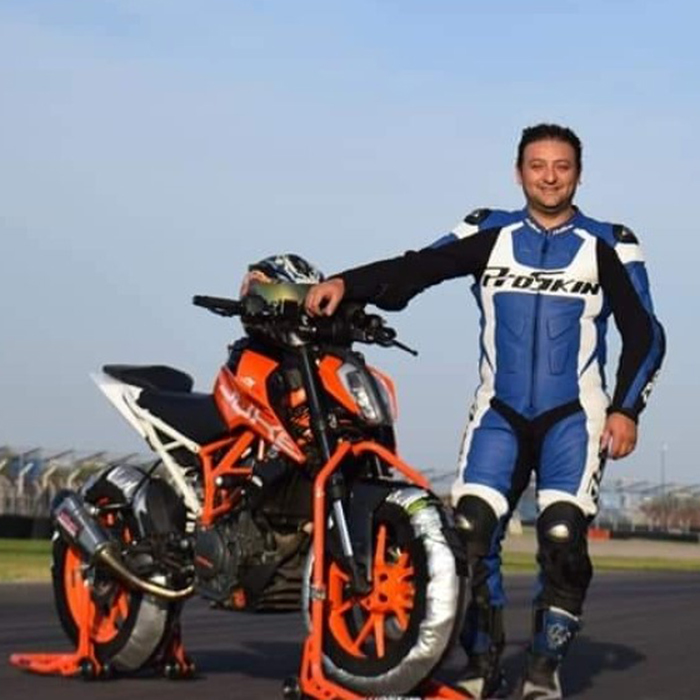 Argentinian Miguel Garay is no slouch when it comes to hustling a motorcycle. Regardless if it’s the smooth asphalt of a well-maintained racetrack, the potholed and rough edges of the street, or the dirt stages of the Dakar, Miguel has turned a wheel on all of them.

Miguel Garay hails from Tucumán, in Northern Argentina. He started his motorcycle journey at the young age of 15 on a clapped-out 50 cc scooter, which he rode – and thrashed – for 3 years. The bug had bitten and it wasn’t long after when Miguel set his sights on something bigger and faster.

After several years of hard work, he was able to make the jump to a high-performance 600 cc sportbike in 2001, enjoying the many twisty roads around his hometown. In 2005, he decided to attend a track day with an instructor, which he says took his riding ability to the next level.

Realizing he had a certain talent and knack for getting his knee down, Miguel decided to step up and enter a few local street races, eventually winning the amateur category in the 1000 cc class in Argentine National Championship in 2010.

But Miguel didn’t stop there. With the Dakar Rally heading through Argentina in 2011, he decided to give Cross Country Rally racing a go, finishing the Desafío Ruta 40. This is an annual 10 day, 5,600 km Dakar preparation race, considered to be among the toughest in the world.

Sadly, Miguel went through a rough patch where he really thought his riding days were over. He “hung up his gloves” and had parted ways with motorcycles for a number of years.

That was until he was invited by his local KTM dealer to help launch the KTM 200 DUKE, and was asked to do a few exhibition laps around a local kart track. Again, the bug bit – seeing Miguel take delivery of a brand new KTM 390 DUKE.

Since then, Miguel has upgraded his DUKE arsenal, racing a number of hillclimb events on a KTM 690 DUKE, and most recently, adding a KTM 890 DUKE R to his garage, which he says, gives him the freedom to explore the street, but also the ability to scare a few superbikes on track.

Today, he works as a riding instructor in the RXP Team Staff on the renowned circuits of Termas de Río Hondo and Villicum, and has also undertook an epic end-to-end journey of 15,000 kms across Argentina aboard his KTM 790 ADVENTURE – with many more in the pipeline.

For Miguel, being a DUKE rider is to be someone who pushes the absolute limits – not only on a motorcycle, but in everyday life too.

We wish him all the best on his future journey and welcome him as an ULTIMATE DUKE RIDER.