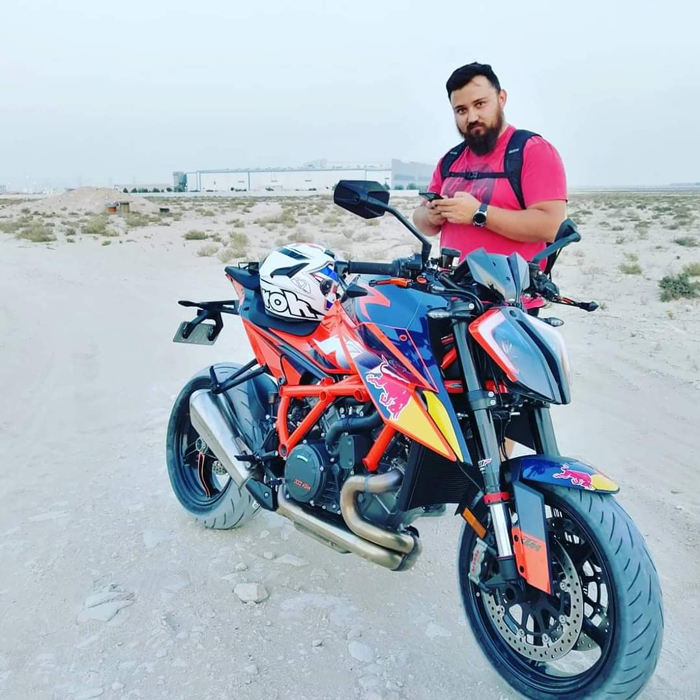 South African-born Michael Grove is no stranger to the KTM world or getting his hands dirty, be it when riding in the dirt or wrangling tools in the workshop. When it comes to being a true rev-head, Mike has his hand tightly around the throttle grip.

Born and bred in the wilds of South Africa, Mike grew up around motorcycles. His dad owned a small motorcycle repair business, and it was here, after school, where Mike gained knowledge of the oily bits that make bikes move.

Growing up, his family didn’t have a lot of money, so while his friends had the privilege of riding new offroad machines, Micheal’s dad took part payment for a job in the form of a 1985 XR200R, which was in a serious state of disrepair.

This was the machine that started it all for Mike, who meticulously and tirelessly worked to strip it down to the frame and rebuild it. It was a long process, but one that Mike attributes to his passion for engines and hard work ethic. Also, says Mike, while he had the oldest machine, he was by far the fastest when it came to weekend rides.

Over the years, Mike became more and more obsessed with KTM as a brand, and has been a staunch orange bleeder for years, starting in 2010 when Mike decided to try out for an apprenticeship position at Dalby Moto KTM in Australia.

Within 2.5 years, he was Australian qualified and working his way up through the ranks. At that stage, Mike was twisting the throttle of a KTM 500 EXC-F in the Queensland trail ride series, and surprising a few big names in the process. In 2015, he moved back to South Africa and worked at a number of KTM dealers, leaving a legacy of unique, custom-built KTMs in his wake.

Now, Mike is off to his next chapter in the KTM realm, where he will be moving to KTM UAE where he hopes to leave an even bigger footprint.

He has also recently kicked off a YouTube channel called Orange Tech, where he shares his knowledge of all things orange, and the KTM love and has already amassed over 937,000 views.

When asked what the DUKE mentality means to him, Micheal has a pretty simple answer – “When I see another DUKE rider, the statement has already been made. You don’t care who is behind the helmet, you know that is a rare breed of human and a human that I will call family”.