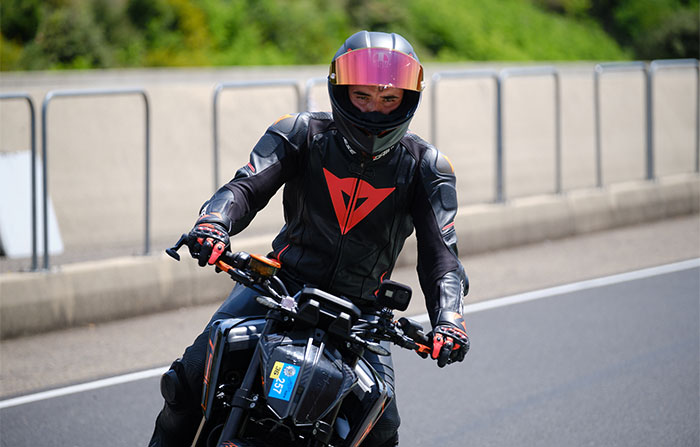 French rider Thibaut Clerc grew up riding the epic alpine roads in and around Grenoble, cutting his teeth on the sweeping switchbacks of the mountains. On a DUKE, these roads are the perfect playground – one that Thibaut knows all too well.

Grenoble, a city in the Auvergne-Rhône-Alpes region of southeastern France, sits at the foot of a mountain range between the Drac and Isère rivers. It’s well known as a base for winter sports, but also for its simply un-ending ribbons of twisted asphalt.

At 24, Thibaut is one of our younger ULTIMATE DUKE RIDERS, but his experience makes up for his youth. Having been in the saddle for over 8 years, Thibaut began exploring the mountain roads around Grenoble as a pillion on the back of his brother’s motorcycle.

Deciding that he could no longer “ride” on the back, he got himself into the swing of things onboard a KTM 125 DUKE, and quickly upgraded to the thumping, single cylinder KTM 690 DUKE. Simply put, Thibaut says that no other manufacturer could come close to matching the sheer fun factor of the KTM DUKE range.

Naturally, a KTM 790 DUKE was the next step. Thibaut says the Scalpel’s aggressive power and agile handling makes it the ultimate weapon for riding in the Alps. More often than not, embarrassing sportbike riders in the princess.

Thibaut says that’s what the DUKE mentality is all about. It’s about fun, but with a little touch of aggression. A DUKE rider is always READY TO RACE. They are in tune with the soul of the machine.

Regardless of if the ride is going to work, exploring the scenery or on the track, the world is the DUKE’s playground.